Customer Question
I have a 40" LCD...
I have a 40" LCD Flatscreen TV. M#LN40A450C1D S#B46A3CSQ402385K .I also have comcast satelite tv. We shut it off last night. Now the red light on the lower right front just keeps blinking
. TV will not turn on at all.
Submitted: 8 years ago.Category: TV
Show More
Show Less
Ask Your Own TV Question
Share this conversation

Did you unplug the TV's power cord for a FULL 5 minutes? It takes 5 minutes for the computer to reset.

When you turn it on, LOOK at the LCD screen for the first 30 seconds, and see if the LCD panel "gently lights up"....even for a split second.

Does it Never light up?

Ok, it sounds like the power supply's inverters are dead, they light up the TV's panel, and once lit, the picture and sound come alive.

We need to make sure the power supply is delivering the needed voltage to it. You have a voltmeter available to test ?

With the rear cover off the back of your TV set, the inverter needs to be tested to see if it's getting 12 to 24 volts from the power supply board. IF it's not, we replace the Power board, if it is, we replace the Inverter board.

Here is the general layout of your TV set -- 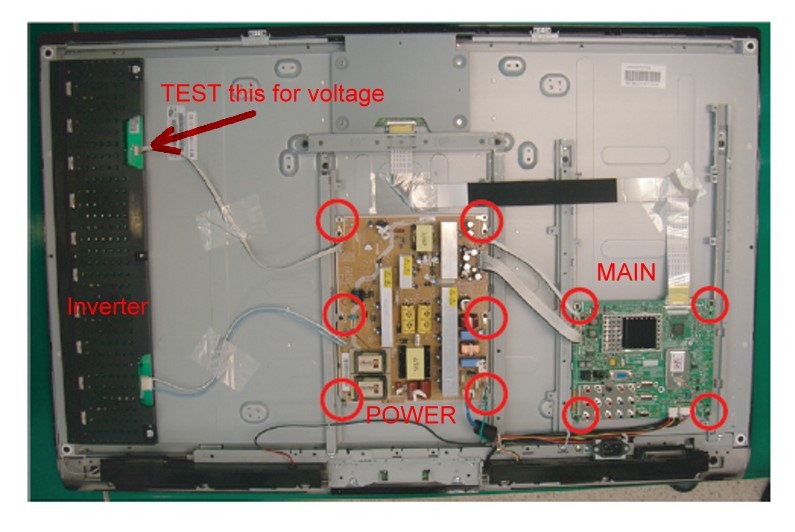 Let me know if you can check that cable for power ok?

Customer reply replied 8 years ago
Do you use a voltage meter.....i do not have one but will get one tomorrow..thanks ill get ahold of u tommorrow

Well, it's how you want to Fix it really.....we can throw boards at it. I do that under warranty. 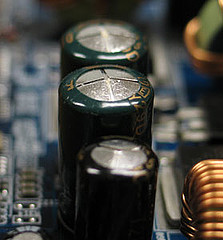 The top of caps are supposed to be flat -- 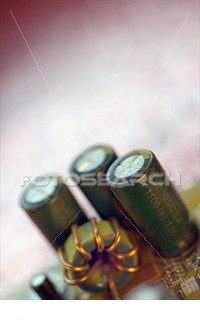 Or we can make sure the power supply is NOT delivering 12 Volts and 5 volts etc...

To be honest, with Your inverters not firing up the TV at all....I'd would just throw a power supply board at it. But there's two different power boards because Samsung has Two Plants, and one of them built your TV set. That's why we usually ask for the barcode on the board, because it tells us which board is used.

In your situation -- the heatsinks (aluminum bars) can tell us which board is needed.

Those Bulging caps are top right of the board -- you see bulging caps, then we don't need a VOLTMETER at all.

So, when you open up the rear cover, I suggest laying it face down on a padded table near a power plug. With the stand hanging over the edge of the table and you standing right by the stand....That first picture I sent will be in proper reference to what you see.

On the power board -- the inverter transformers are usually Lower Left and the Caps Upper Right on the power board. There is a very Large Multiwire plug in the upper right too. I will unplug the Multiwire plug and see if the Backlights light up....if they don't, then I jumper the P-ON command line, then the INV-ON command line on that Multiwire to fire up the power supply. I use the 5 Volt or 3.3V standby to intialize those two power sections and see the Backlight coming out the HOLES in the LCD panel.

And to be honest, You probably don't need a $30 meter from Sears either.

We install ONE board.....and if we are RIGHT

The BOARD I would bet my paycheck on is the POWER BOARD !!

And I would BET HEAVILY....

So, want to just get the Board and forgo the P-On /INV-ON test?

If so -- LOOK at the 2 Power supply boards here.

Check the caps, because THAT is a no-brainer then.

Note the differences in the Aluminum bars on those boards and select the BN44-0019xx number that matches.

Then let me know, ok?

That voltmeter is really a "cover my butt" tool....If I'm wrong, then we look at the MAIN which RARELY loses it's ability to turn ON the power supply board...

It's blinking so there's micro activity.

And think about it...If I'm Wrong because there is more than one possibility from your symptoms....What would you think of ME And JA ?

Initial meeting...Hi I'm TECH 1 and I just told you to order the WRONG board because it's 99.9% the Correct board to order, but that MAIN board has caused a Teeeeeeny Weeeeeeeny bit of that failure too !

You would think that JA and ME are real Pitstains....

So, rather than getting a Voltmeter and being Correct, let's use experience....I would take that chance to be wrong once in a while...I'm a Field Tech so we hit the TV's first, and send the "Unknowns" to the bench techs.

So really, I'd order the board and be back to your home in a week, if those BULGING CAPS aren't staring me in my face.

So, as a guy that works with this...Power supply board is the one most likely killing your TV set

Chat 1:1 with a tv technicianLicensed Experts are available 24/7

100% satisfaction guaranteeGet all the answers you need
Share this conversation
Related TV Questions
My tv turns off automatically when there's noise. I just
I just bought this tv yesterday now it won'y turn on … read more

Aric
Owner/Operator of a custom AV company
Run A/V and repair business for over
36,670 satisfied customers
My daughter inherited this flatscreen tv. We do not have any
My daughter inherited this flatscreen phillips tv. We do not have any manuals etc. It was working yesterday, but I turned it off using the comcast remote yesterday, which I did not know was not correc… read more

Livep9
Correctional Officer
Vocational, Technical or Trade Scho
226 satisfied customers
Show more
Disclaimer: Information in questions answers, and Show More
Disclaimer: Information in questions, answers, and other posts on this site ("Posts") comes from individual users, not JustAnswer; JustAnswer is not responsible for Posts. Posts are for general information, are not intended to substitute for informed professional advice (medical, legal, veterinary, financial, etc.), or to establish a professional-client relationship. The site and services are provided "as is" with no warranty or representations by JustAnswer regarding the qualifications of Experts. To see what credentials have been verified by a third-party service, please click on the "Verified" symbol in some Experts' profiles. JustAnswer is not intended or designed for EMERGENCY questions which should be directed immediately by telephone or in-person to qualified professionals.

I'm screaming your praises!! WOW! I plugged my TV in and bammo! The picture came on bright and beautiful. What a relief! YOU saved me some money and headache.

I love this site! $9 instead of a repairman or new/used frig can't be beaten. This older woman will worry less now that she knows about this site. Bless you all.

25+ yrs. experience in the field and 5+ yrs. online, down to component level.

Training on many types of consumer electronics, training on Sony Samsung and JVC

I have been an electronics technician for 17 years, Tv's VCR's, DVD players, home and car audio.

expert tv technician for over 25 years