Odd that the DVD no longer works...is that also a No Sound problem with the DVD too?

If you did press a button on the Cable box's remote, it would only be the mute button.

If it was on the TV's remote -- it might be the SAP/MTS audio button, but you don't use that remote when you have cable.

You MIGHT have pressed the INPUT/Source/Device button which switched you to a second INPUT Jack that has picture on it but NO sound connections. You know most people just stick the extra cables in the holes on the back of the TV set or have redundant video/audio connections from yesteryear.

Of course that wouldn't explain why your DVD has issues either....

Were you behind the TV moving cables around? That's not a good idea when the problem occurred because you pressed a wrong button on the remote.

Or DID you press a wrong button? We don't know that for sure....

Cable Box -- No Sound , has Picture

DVD -- No Longer Works -- Could be dead, could be it doesn't open, could be sound, could be picture....not sure about this one.

Tell you what, Let's get some more information --

First the TV -- get the model number and Brand name. That's always needed.

Second the DVD -- Get the model and brand

Third -- What displays on the TV set when you switch from Cable to the DVD player and back ?

Last -- Turn up the TV's volume real loud to see if you can just BARELY hear something....Even the HISS sound all main amps do if turned up loud....That would at least tell us the main amp is ok.

We have a converter box hooked up both to the TV and the DVD player. We use two remotes, one for the DVD player and one for the TV. When you turn on the TV, if you don't follow just the right sequence things get messed up and it is not possible to run the DVD player. This time also the sound is off on the TV. The DVD player goes on, but it is not possible to play a DVD. When you turn on the DVD, it does not play the disk, but on the right top of the screen it says, Video 1, then Video 2, then Video 3, then Color Screening, but won't allow the disk to be played as usual.

The TV is an old Toshiba and the DVD player is a Sony. Thanks,

You're welcome. Can you get the Model numbers off of both those units?

They're necessary for me to research your problem.

Off the top of my head, I would have the Cable box wired to the Color Stream input if it's a High Definition Cable box. Or Video 1 if it's not HD.

Then I would have the DVD connected to Video 2.

If you don't get sound on either one with those connections, then the Audio processor or the Audio amp is likely to be dead.

Some TVs have a speaker on/off switch -- your's may be on the back of the TV set or it can be in the TV's menu in the Audio section.

Since both are affected, that's the most likely problem. We'll have to step thru the obvious possibilities first.

We do not have cable. That is why we use a converter box for the television. The model of the TV is a Toshiba 24AF45, and the model of the DVD player is a Sony SLV-D560P. The DVD player opens and runs fine, but will not allow the DVD in it to play on the TV. I am certain we pressed a wrong button somewhere along the line, because that is when these problems started. Somehow the settings have been changed, affecting both the sound on the TV and our ability to display the DVD on it. But despite checking all the troubleshooting sections of the owner's manual for both DVD and TV, we cannot locate the source of the problem. I know this is very bizarre. I appreciate any possible solutions you can suggest.

Ahhh, an OLD TV with one of those government recievers....Mine broke years ago

We got our money's worth.

These are the ONLY buttons that can affect Sound -- Make sure you press the Blue button first, but try the MTS button to make sure it's NOT set to SAP on the TV screen. 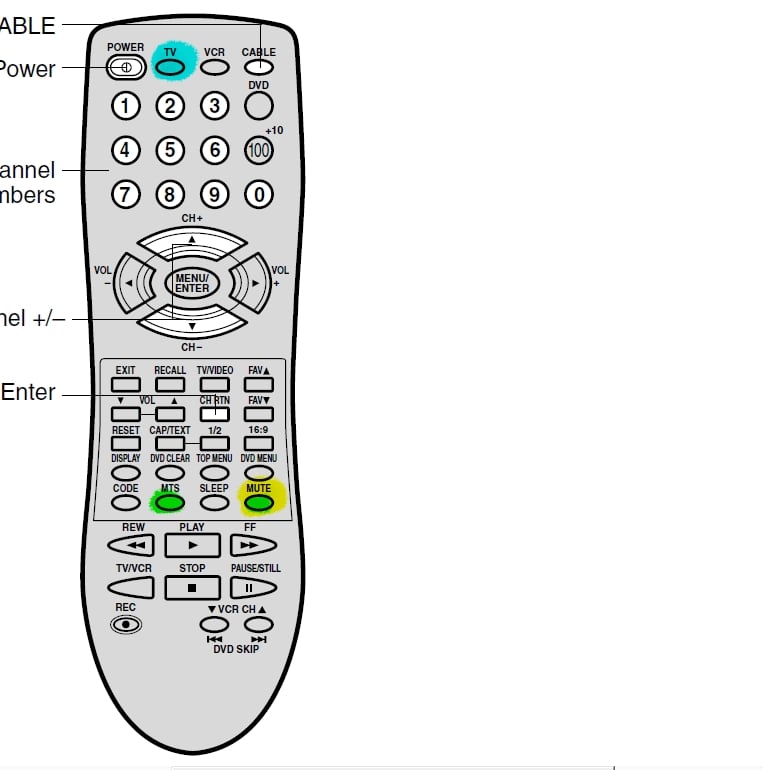 Don't be surprised if parts aren't available....they haven't made parts for those TV in over 5 years, they needed the room for LCD and DLP TV parts.

Unfortunately, I tried the MTS button and it did not work. I pushed the MTS button, but nothing happens at all when I do that. Shouldn't something appear on the screen? I know the amp is fine because when I turn the sound way up I can hear the hissing sound. It seems logical that it would be the MTS button, but somehow the sound has been turned off, and the MTS button does not have any effect. In any case, you have done the best you could from a distance. This is obviously some bizarre problem, so after I send this I am just going to hit "accept answer." Thanks for your help and expert assistance,

Chat 1:1 with a tv technicianLicensed Experts are available 24/7

James D
Vocational, Technical or Trade Scho
70 satisfied customers
Show more
Disclaimer: Information in questions answers, and Show More
Disclaimer: Information in questions, answers, and other posts on this site ("Posts") comes from individual users, not JustAnswer; JustAnswer is not responsible for Posts. Posts are for general information, are not intended to substitute for informed professional advice (medical, legal, veterinary, financial, etc.), or to establish a professional-client relationship. The site and services are provided "as is" with no warranty or representations by JustAnswer regarding the qualifications of Experts. To see what credentials have been verified by a third-party service, please click on the "Verified" symbol in some Experts' profiles. JustAnswer is not intended or designed for EMERGENCY questions which should be directed immediately by telephone or in-person to qualified professionals.

I'm screaming your praises!! WOW! I plugged my TV in and bammo! The picture came on bright and beautiful. What a relief! YOU saved me some money and headache.

I love this site! $9 instead of a repairman or new/used frig can't be beaten. This older woman will worry less now that she knows about this site. Bless you all.

25+ yrs. experience in the field and 5+ yrs. online, down to component level.

Training on many types of consumer electronics, training on Sony Samsung and JVC

I have been an electronics technician for 17 years, Tv's VCR's, DVD players, home and car audio.

expert tv technician for over 25 years