MONTANA: 5TH WHEEL..GOES DOWN IT BLOWS A FUSE. DEALERSHIP SAID THERE…

Customer Question
MY NAME ISXXXXX IN OREGON...
MY NAME ISXXXXX IN OREGON, BOUGHT MY 2009 5TH WHEEL MONTANA 10TH YEAR ANNIVERSARY MODEL. HERE IS MY QUESTION, WE ARE HAVING TROUBLE WITH LANDING GEAR WHEN IT GOES DOWN IT BLOWS A FUSE. DEALERSHIP SAID THERE IS NOTHING THEY CAN DO, SO THEY DREW A LINE ON LANDING GEAR LEGS AND SAID DON'T GO PAST THAT. THIS IS A 65,000.00 DOLLAR UNIT AND THERE HAS TO BE A BETTER FIX FOR THIS PROBLEM THEN THAT. IT ONLY HAPPENS WHEN GOING DOWN. THERE MUST BE A SHUT OFF SWITCH OR SOMTHING THAT IS NOT WORKING PROPERLY. MY E-MAIL ADDRESS [email protected] OR CALL XXX-XXX-XXXX. THANK YOU IN ADVANCE FOR YOUR ASSISTANCE. LON
Submitted: 12 years ago.Category: RV
Show More
Show Less
Ask Your Own RV Question
Share this conversation

Lon, thank you for the clarification.

I'm going to make a guess that the fuse is blowing when the inner legs (the middle tube that moves when the motor is operating) are retracted as far as they will go. If that's the case, then your dealer is correct. As a matter of fact, that's the same thing I would tell both owners and dealers when I would talk with them about RBW's landing gear legs.

Let me explain why, and then I'll give you some suggestions about alleviating this issue.

I have always recommended to owners and dealers to extend the landing gear down until 3" of the inner leg is exposed when measured from the bottom of the outer tubinge of the leg to the bottom of the inner leg. (The amount of quick drop leg extension has no bearing on the operation of the landing gear at this point). Once the inner leg has been extended to the 3" point, paint or mark a line and stop retracting the legs once that line is reached. The reason for this is more than to prevent the fuse from blowing. When the legs are operated to full retraction there will be a great deal of stress put on the acme nut, miter gears and the drive shaft of the leg. Continuous over-retraction will result in damage to at least one of those components resulting in repair or replacement of the affected leg.

At the present time, I'm not aware of any landing gear manufacturer that is providing a cut off switch or control box to stop the landing gear from operating once it reaches a specific distance before being over-retracted. The favored method today is to have a clutch integrated into the motor. When the leg reaches complete retraction the clutch ratchets in an attempt to prevent/limit damage to the landing gear system. Over time the clutch can wear out due to excessive ratcheting. When this happens the motor must be replaced because it will no longer lift the trailer because the clutch springs or the clutch plate has worn.

A limit switch can be installed, but it would require some modification of the landing gear leg. The problem here is that the switch and wires are prone to failure caused by dirt, debris and impact from road objects. 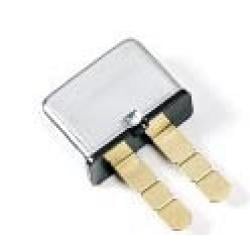 2. If the fuse blows or circuit breaker trips during operation of the landing gear and the legs have not been fully retracted check battery voltage and then the landing gear legs for bends in the tubing.

Lon, in this day and age of electronics, I know it's hard to believe that there isn't some sort of electronic control system for your landing gear. Look at it this way though, that's one less piece of gadgetry you have to worry about.

I realize my answer is rather lengthy, but I want you to have all the information I could give to you. If you have any follow ups to this question don't hesitate to ask. I want to be sure I explain my answer clearly.

I just saw your second reply where you added information that you have a remote control for your landing gear. ALTA supplies the remote for that system and I know for a fact that there is no limit switch with that system. My answer above stands.

Verified
D. Wood and 87 other RV Specialists are ready to help you
Ask your own question now
Customer reply replied 12 years ago

THANKS FOR THE RESPONSE TO MY QUESTION, I WOULD LIKE THE TIME TO LET MY WIFE DEB, TO READ IT, AND SEE IF SHE HAS ANY MORE TO ADD OR SOME PART OF THIS I DID NOT ADDRESS, SHE WILL BE HOME AFTER 6 SO I WILL REPLY TO YOU OR ACCEPT DEPENDING ON HER COMMENTS THANKS LON

Not a problem, Lon. I want to be sure I have addressed all of your concerns.

Chat 1:1 with a rv mechanicLicensed Experts are available 24/7

Randall
RVIA Certification
Vocational, Technical or Trade Scho
25,660 satisfied customers
2009 Forest: Fifth wheel..my front jacks..My battery..volts
I have a 2009 Forest River Cardinal 33 TSLE Fifth wheel. My 3 slides and my front jacks are extended, but will not retract. My battery is fully charged and I am connected to 110 volts. My name isXXXXX… read more

Randall
RVIA Certification
Vocational, Technical or Trade Scho
25,660 satisfied customers
I get the slide room to retract..pressure at the pump/reservoir assy
How do I get the slide room to retract manually? The owner manual does not tell how to release the pressure at the pump/reservoir assy.to allow using the winch to retract the room manually with the su… read more

gene
RV Mechanic
Vocational, Technical or Trade Scho
1,100 satisfied customers
rv..1995 Cobra Spinnaker 5th wheel with 3 slide-outs..reservoir
I need info about who makes hydraulic parts for RV 5th Wheel slide out rooms. I have a 1995 Cobra Spinnaker 5th wheel with 3 slide-outs and one of them 'drifts out' from the closed in position. There … read more

Robert
RV Tech Support
Vocational, Technical or Trade Scho
22,613 satisfied customers
Show more
Disclaimer: Information in questions answers, and Show More
Disclaimer: Information in questions, answers, and other posts on this site ("Posts") comes from individual users, not JustAnswer; JustAnswer is not responsible for Posts. Posts are for general information, are not intended to substitute for informed professional advice (medical, legal, veterinary, financial, etc.), or to establish a professional-client relationship. The site and services are provided "as is" with no warranty or representations by JustAnswer regarding the qualifications of Experts. To see what credentials have been verified by a third-party service, please click on the "Verified" symbol in some Experts' profiles. JustAnswer is not intended or designed for EMERGENCY questions which should be directed immediately by telephone or in-person to qualified professionals.

Excellent reply, and also very quick. Really sounds like the Expert knows what he is talking about. I will be back to use your service when I need more help with my RV.

Highly recommend this RV expert. Prompt, good and detailed answers were given. Very willing to help with genuine concern. I will ask for him next time.

28 yrs exp in the industry