My betta has a milky colored growth on one side, and it

My betta has a milky colored growth on one side, and it seems to be causing the scales to "pinecone".

Veterinarian's Assistant: I'll do all I can to help. When did you first notice the betta fish had this growth?

I think it started about a month ago when I moved back to college, but I thought it would be fine if I did frequent water changes, since I had no idea what it was. The betta's tail was also "shredded" after the two hour drive, which may be due to another fish.

Veterinarian's Assistant: And what's the betta fish's name and age?

Veterinarian's Assistant: Is there anything else the Vet should know before I connect you? Rest assured that they'll be able to help you.

I don't think so.

Hello and welcome. My name is ***** ***** I’m a biologist with over 40 years of experience keeping fish. I’m sorry to hear that Sapphire is having done very serious problems. Can you send picture of her so I can see her condition? Thank you. 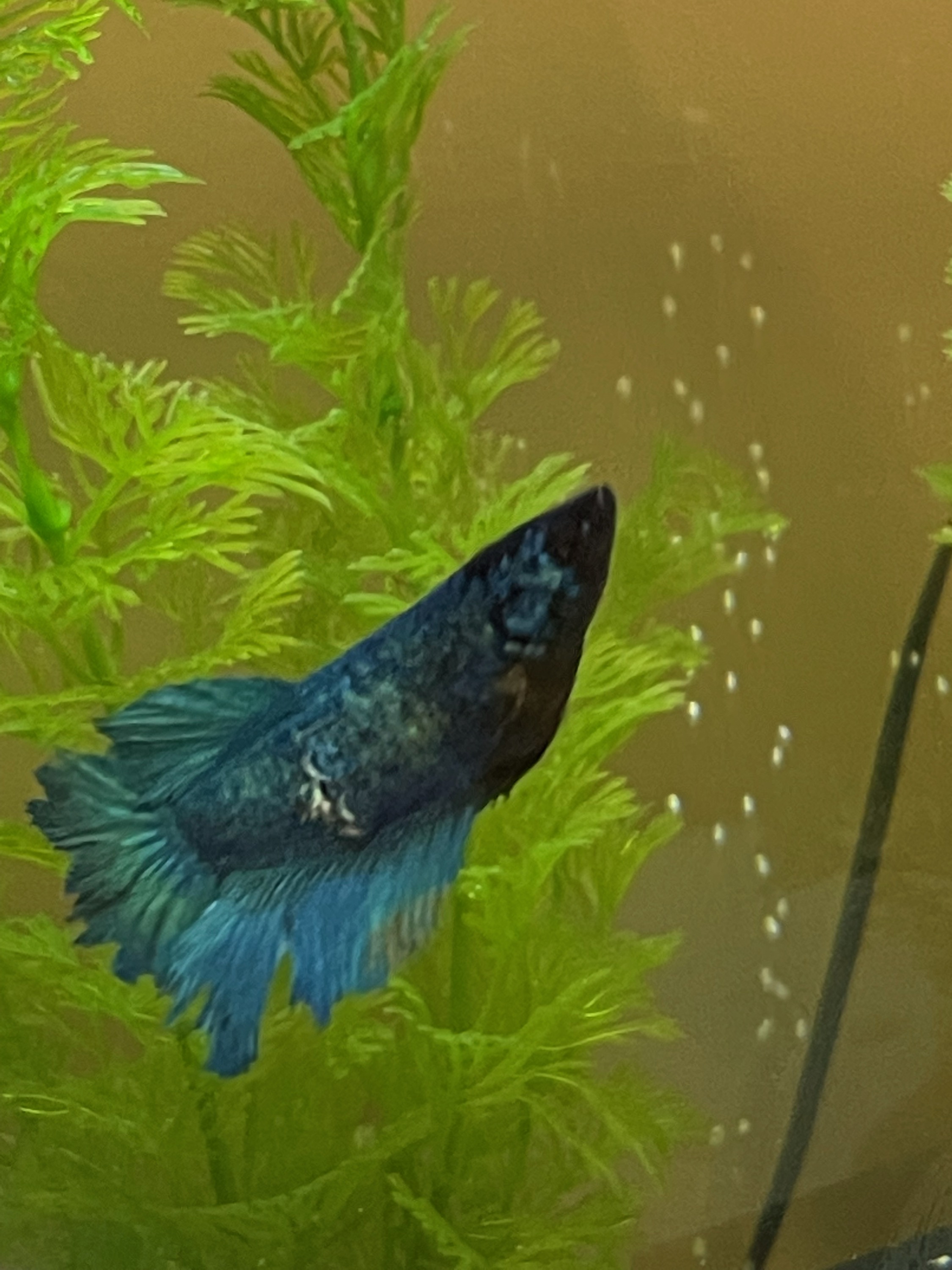 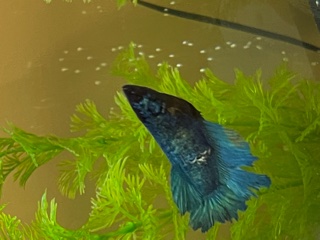 Thank you. I’ll take a look and be back.

I feel horrible to tell you this, but I believe you deserve honesty. This situation does not look hopeful. But we can try.  Before we go on, how is her appetite?

Customer reply replied 8 days ago
Her appetite is normal, I haven't seen any changes. I did also think her situation does not look good, but I wanted a professional opinion.

Thank you. It’s always more hopeful if a fish is eating. The biggest difficulty with this is that she has multiple conditions/ illnesses. The treatment for one may make another one worse. I’m going to go to work on some information for you now, and will post it as soon as I have it typed up. I appreciate your patience.

Customer reply replied 8 days ago
Okay thank you so much! I tried my best to do my own research, but came up short. Take your time!

You’re welcome, and thank you for waiting. We’ll talk about the white growth first. There are two things it could be. One is a tumor. The other is an abscess. There’s no treatment for either one. Many fish tumors are benign, and fish can live with them for some time. An abscess may eventually burst, or it may spread internally and lead to death. In either case, there’s nothing to do but wait and see.

I don’t think the growth is causing the pine coning. I notice that her belly is somewhat swollen. I suspect she has kidney failure. It is the most common cause of such swelling, accompanied by pineconing. The kidneys can’t filter wastes properly and fluids accumulate. Those fluids push the scales outward. This is often referred to as dropsy, but that’s just a name fish keepers have given to kidney failure. Most of the time, it is related to old age. Because of poor breeding practices, betta lifespan has been reduced to around 2 years. Once in awhile, kidney disease is caused by an infection. In those cases, an antibiotic can help. But if it’s not caused by an infection, a strong antibiotic can make things worse by forcing the kidneys to work even harder. More on this in a moment.

Finally, the fins. Regardless of how it happened, frayed fins almost always develop fin rot. Again, we need an antibiotic. Normally, I would recommend a strong one, but Sapphire is probably not in good enough condition to withstand one. So, here’s what I recommend: First, make sure her water is optimal. You want ammonia and nitrites to be at zero, and nitrates at 20 ppm or less. If you don’t have a test kits, take in a water sample to a pet store, where they will test for free. If there is a problem, use water changes to fix it. Aim to keep the temperature 78*F to 82*F. Once the water is good, you can buy some aquarium salt and a mild antibiotic called Bettafix at the pet store. If they don’t carry Bettafix, get Melafix, but only use half as much as the directions say. Add aquarium salt -only once- at the rate of 1/2 teaspoon per gallon of water. It is safe to use these mild antibiotics with aquarium salt.

There’s no way to predict how much the medications may help. They will at least slow down the progress of the illnesses. As long as she is eating, she is not in too much pain or distress. She may go on for some time like this. If she reaches the point that she is struggling, you may want to consider humanely ending her suffering. If you want to know how to do that for future use, let me know. Some people prefer to let nature take its course, so I ask before providing tgat infirmation.

Verified
Anna and 87 other Pet Specialists are ready to help you
Ask your own question now
Customer reply replied 8 days ago
Okay, I'll consider this information carefully and make a decision. I have researched humane methods in the past, so that's an option. Thank you for the advice!

You’re very welcome. You have a good plan. It’s always good to think things through.

Chat 1:1 with a pet specialistLicensed Experts are available 24/7

100% satisfaction guaranteeGet all the answers you need
Share this conversation
Related Pet Questions
Female betta slightly bloated and pineconing. About two
ruby and maybe 2-3 months old. I got her at petco. … read more

Anna
Pet Expert/Biologist
Bachelor's Degree
14,457 satisfied customers
I have a female beta that appears to have fin rot. I have
I have her in a tank with two aquatic frogs. The water quality appeared to be fine when I checked it with the strips. … read more

Terri Riba
Animal Healthcare expert
Private
6,870 satisfied customers
My betta fish's tail is disappearing. Within the last month.
I went to Walmart for tail rot treatment and it didn't help no I cannot find one near me that treats for fish … read more

Anna
Pet Expert/Biologist
Bachelor's Degree
14,457 satisfied customers
I'm having a problem with my betta fish. It's only been a
It's only been a few hours but the change is drastic. My betta is 5 months old and just a few hours ago was acting normal and eating well … read more

Anna
Pet Expert/Biologist
Bachelor's Degree
14,457 satisfied customers
My pet is lethargic. Betta. Since today I got it yesterday.
the aquarium is a 2,65 gallons with a filter and the water is at 25C.… read more

Anna
Pet Expert/Biologist
Bachelor's Degree
14,457 satisfied customers
Show more
Disclaimer: Information in questions answers, and Show More
Disclaimer: Information in questions, answers, and other posts on this site ("Posts") comes from individual users, not JustAnswer; JustAnswer is not responsible for Posts. Posts are for general information, are not intended to substitute for informed professional advice (medical, legal, veterinary, financial, etc.), or to establish a professional-client relationship. The site and services are provided "as is" with no warranty or representations by JustAnswer regarding the qualifications of Experts. To see what credentials have been verified by a third-party service, please click on the "Verified" symbol in some Experts' profiles. JustAnswer is not intended or designed for EMERGENCY questions which should be directed immediately by telephone or in-person to qualified professionals.

You are a light at the end of scary tunnel when $ are tight, but people need professional help to turn to for help with their dear pets!

$1,000 spent at his vet, and I finally get the correct diagnosis from Nancy Holmes for $15

I think this is the greatest web site in the world. Thanks to all!

I have referred several friends to your web site. I'm impressed with how easy it is to use your site, the Experts available and the quickness of answers.

I am completely pleased with the quick response that I received in our time of need for our dog, Jasmine. I couldn't believe how quick the response was and I thank you. It's good to know you're there!!

Please let everyone involved with your site know that your Expert, Dr. Lucy, has saved my dog's life. I will recommend your site to all my pet loving friends. Thank you again for simply being there!

15 years of experience in emergency, surgery and medicine

Expert in pet health and behavior. 20 year experience with animals.

Specialist in Pet Healthcare and Behavior