He's a Betta and there is something wrong with his swim

He's a Betta and there is something wrong with his swim bladder. It's been over a week of him floating to the top and not being able to swim well. I've tried everything I could find online and nothing seems to be helping him.

Veterinarian's Assistant: I'll do all I can to help. Can you tell me a little more about the betta fish's situation?

He's in a 20 gallon tank with a divider, there's another betta and a snail on the other side. He has a snail on his side. He hasn't eaten in days and shows no interest. It's awful, he just looks like he's suffering. I don't know how to help him.

Veterinarian's Assistant: A lack of appetite can seem worrying. Does the betta fish also seem more tired than usual?

Yes. He really doesn't move much at this point. Swimming looks tiring for him.

Veterinarian's Assistant: Does the betta fish seem to be in any pain?

I don't know how to tell. He looks like he's given up. He's breathing, but barely moves. His eyes move and he looks at me, but when I touch him he doesn't freak out. He just keeps floating.

Veterinarian's Assistant: And what's the betta fish's name and age?

We tried separating him in a small bowl with less water for 24 hours, I kept it warm with a little aquarium heater and added aquarium salts (about 1/8 of a teaspoon) but it didn't seem to help. He's back in the big tank and I added BettaFix to the water yesterday, but that doesn't seem to be making a difference either.

Hello and welcome. My name is ***** ***** I’m a biologist with over 40 years of experience keeping fish. I’m sorry to hear about this problem. There are many other illnesses besides swim bladder disorder that can cause a fish to float on its side. Can you send me a picture of him so I can see his condition? You can upload a photo by clicking on the paper clip icon in the toolbar at the top of the space where you type. Instructions should pop up. Thank you. 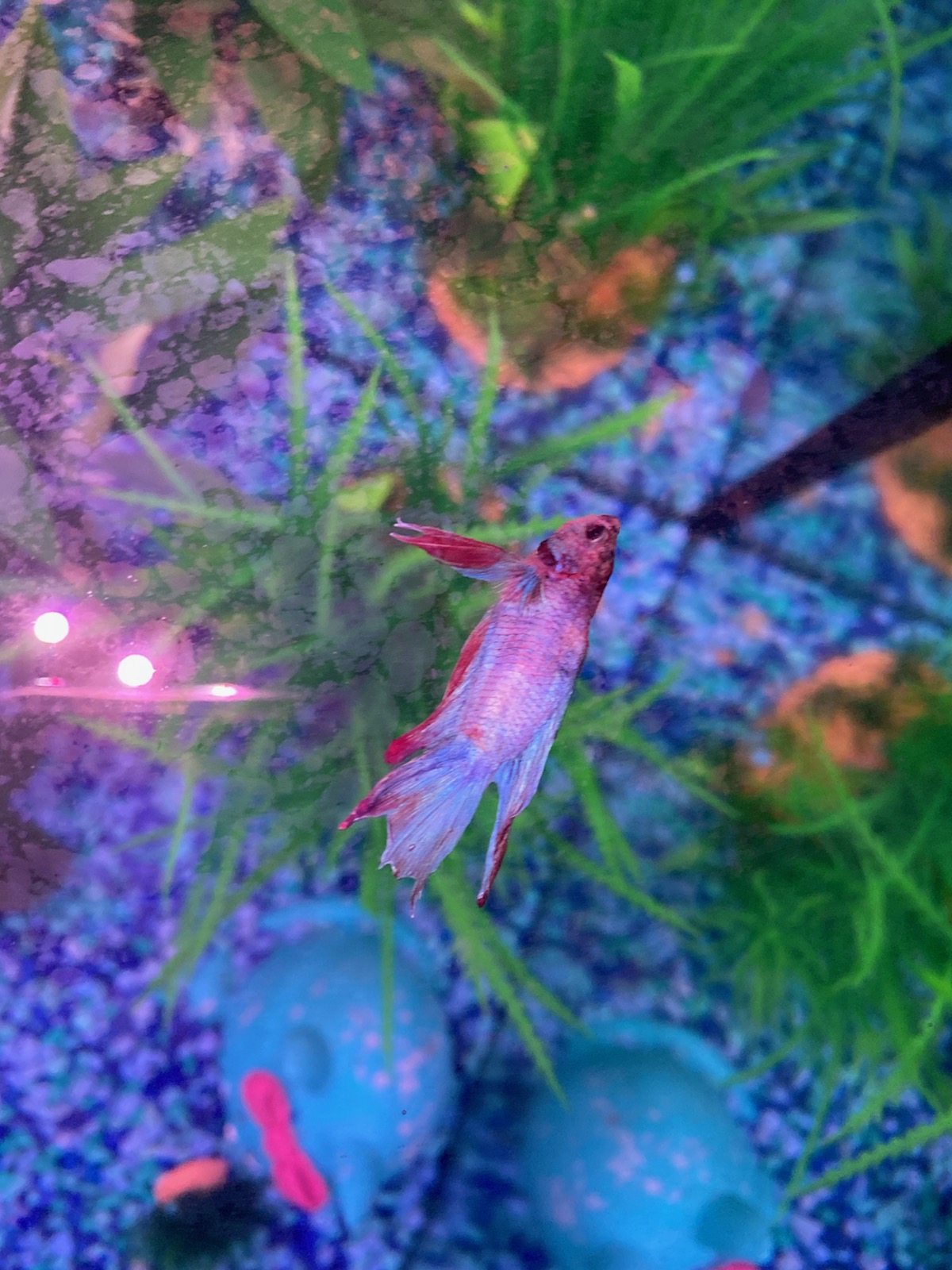 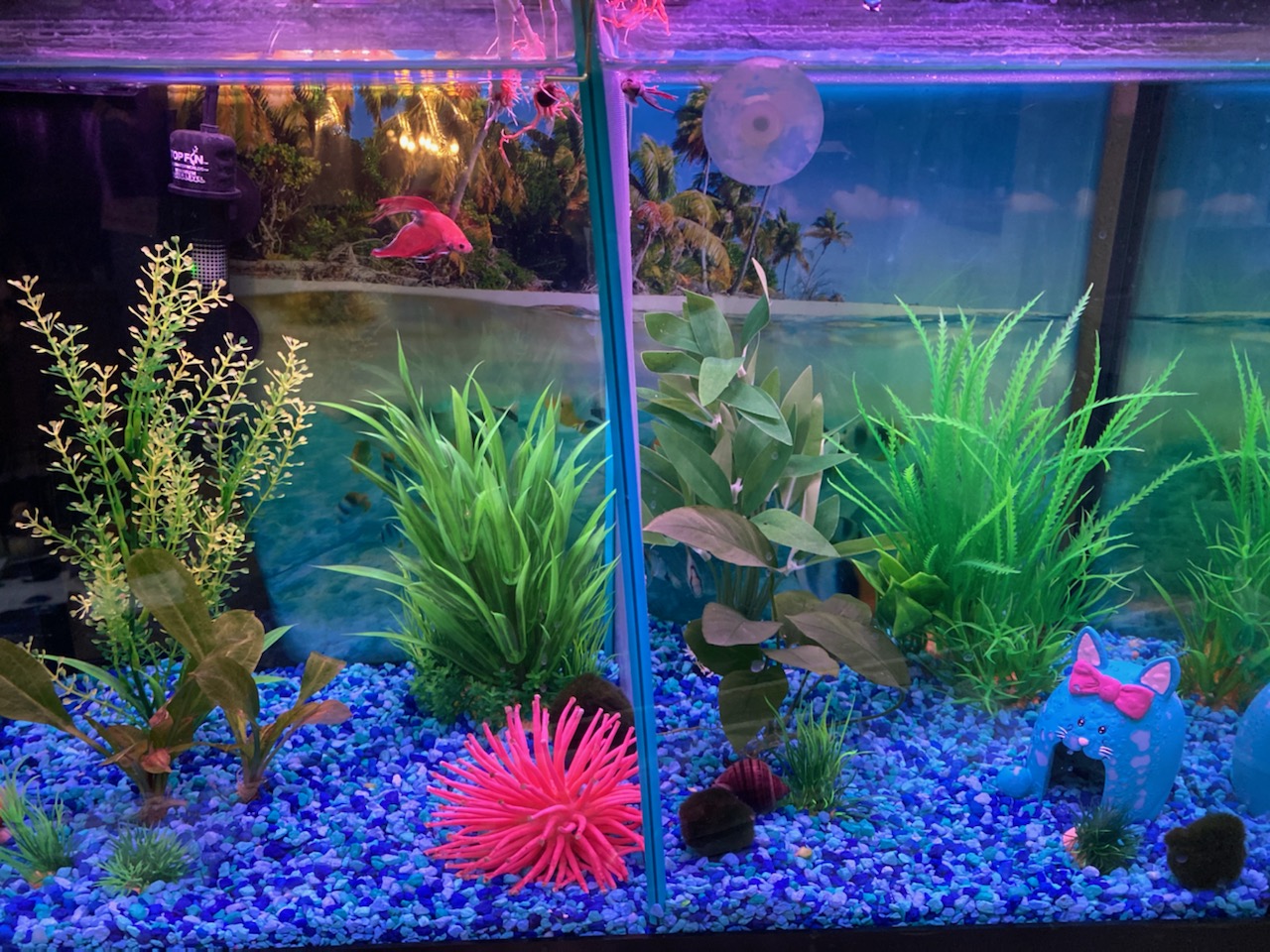 Thank you. Has his color changed/faded since you got him?

Also, when did he last eat!

Customer reply replied 1 year ago
It has. He's not as vibrant. He had something similar about a month ago- he looked like he was having trouble swimming and I read it could be constipation. Everything else was normal, he could swim and was eating so I fasted him a couple days and then gave him a little chunk of pea. He seemed totally fine the next day.He hasn't eaten in at least 4-5 days.We joke he's our shark- he would just attack his food like he was so excited. And splash about all happy. So now that he's not eating I feel awful. I hate seeing him suffer.

That’s sad. It sounds like what happened before was a swim bladder problem since it responded to treatment. But now, It looks to me in the first photo that he has fin and tail rot. The fins look ragged and smaller than they should be. That makes it harder to swim. In addition fin rot eventually infects the internal organs. That’s when appetite loss occurs. If a betta won’t eat, there is no hope of saving him. So the first priority is to try to find something he will eat. I suggest one of the live or frozen foods sold in pet stores. Those foods are often refrigerated in the back, so you may have to ask for them. If you can get him to eat, then treatment may be possible. Let me know how the feeding goes, and then we’ll decide what to do next.

Customer reply replied 1 year ago
Ok that's good to know, thank you! I'll give it a try and let you know how it goes.Can snails be bad for fish? I got them thinking they would be helpful but I read an article that said they can cause bacteria problems.

It is possible for snails to carry bacteria, but that’s not extremely common. Fin rot would not be one of the diseases they carry. I don’t think they’re a big threat. It’s up to you if you want to keep the snails.
If you can get Rocky to eat, I’ll tell you how to treat the fin rot. But if he absolutely will not eat, treatment won’t do any good. Please keep me posted on what happens with the food.

Customer reply replied 1 year ago
Ok, thank you very much!!

Pet Specialist: Anna, Pet Expert/Biologist replied 1 year ago
You’re welcome. I wish you success with feeding.
Customer reply replied 1 year ago
Unfortunately Rocky died this evening. I tried feeding him several times throughout the day, but he wouldn't go for anything. He had a couple of bursts- where he shot around the tank a bit and then he passed. Thank you for your answers today. I appreciate it.

I’m sorry to hear that. I suspect the fin rot had progressed internally. There was nothing more you could have done. I’m sorry for your loss of Rocky.

Customer reply replied 1 year ago
Thank you. My daughter is already asking to get a replacement. What can I do to prevent it from happening to any other fish? In other words, what did I do wrong?

You’re welcome. You probably didn’t do anything wrong.

Breeders have turned to intensive inbreeding in bettas in order to get the long fins and unusual colors. But another result is that the fish now have weak immune systems. As a result, severe fin rot has become common. In some bettas, the fin rot becomes chronic and has to be treated several times a year.In others, one treatment solves the problem. But in others yet, nothing works, and they die.

When you choose a new betta, it’s best to look for a young one, who hasn’t yet developed the long fins. Examine fins carefully. If they look at all frayed or if they have a white, slightly fuzzy appearance to the edges, choose another fish.

Make sure the filter in your tank is not producing a strong current. Bettas don’t do well with current. In nature, they live in shallow, still pools. Current isn’t going to cause any disease, but the constant stress of fighting a current in order to swim can weaken the immune system.

But overall, it sounds like you do a great job of caring for your fish. You just got unlucky.,

Customer reply replied 1 year ago
Thank you for your help, I really appreciate it!

Verified
Anna and 87 other Pet Specialists are ready to help you
Ask your own question now
Was this answer helpful?
Yes
No

Chat 1:1 with a pet specialistLicensed Experts are available 24/7

TROPICAL FISH AFICIONADO
Bachelor's Degree
2,438 satisfied customers
Show more
Disclaimer: Information in questions answers, and Show Less
Disclaimer: Information in questions, answers, and other posts on this site ("Posts") comes from individual users, not JustAnswer; JustAnswer is not responsible for Posts. Posts are for general information, are not intended to substitute for informed professional advice (medical, legal, veterinary, financial, etc.), or to establish a professional-client relationship. The site and services are provided "as is" with no warranty or representations by JustAnswer regarding the qualifications of Experts. To see what credentials have been verified by a third-party service, please click on the "Verified" symbol in some Experts' profiles. JustAnswer is not intended or designed for EMERGENCY questions which should be directed immediately by telephone or in-person to qualified professionals.

You are a light at the end of scary tunnel when $ are tight, but people need professional help to turn to for help with their dear pets!

$1,000 spent at his vet, and I finally get the correct diagnosis from Nancy Holmes for $15

I think this is the greatest web site in the world. Thanks to all!

I have referred several friends to your web site. I'm impressed with how easy it is to use your site, the Experts available and the quickness of answers.

I am completely pleased with the quick response that I received in our time of need for our dog, Jasmine. I couldn't believe how quick the response was and I thank you. It's good to know you're there!!

Please let everyone involved with your site know that your Expert, Dr. Lucy, has saved my dog's life. I will recommend your site to all my pet loving friends. Thank you again for simply being there!

15 years of experience in emergency, surgery and medicine

Specialist in Pet Healthcare and Behavior

Voice for your pet