I am concerned my son’s tree lizard, Wallace, is dying. I…

Customer Question
Hi Pearl. I am...

Hi Pearl. I am concerned my son’s tree lizard, Wallace, is dying. I found him on his back this morning and his stomach looked a little concave. I brought him outside in my hand and put a little warm water on him while I let him bask in the sun. We are in Tampa, so it is hot.

Veterinarian's Assistant: Hi there. I'll do all I can to help. Can you tell me a little more about the lizard's situation?

He is lethargic. My son found him in the woods in November and we believe he is an ornate tree lizard. Probably someone’s pet that got away or was released. He was barely alive when my son found him, his tail had been torn off (still has not grown back) and my son handfed him crickets for a week until he finally seemed to be healthy.

Veterinarian's Assistant: How has the lizard's appetite been? Any changes in his stool?

My son typically feeds him wax worms and crickets but he was feeding him meal worms also, until recently. He told me he thinks the meal worms are too hard for him to eat. We couldn’t find crickets the last few weeks, everyone was out. So he has been feeding him just wax worms.

Veterinarian's Assistant: Could he have eaten something unusual?

He recently changed out his home… we had a huge “tree” of driftwood in there and my son purchased a net and some fake plants, thinking it would be a nice change of scenery… Wallace seemed to do okay with it until I saw him this morning on his back, barely moving 😢 I need to check his stool… will look in his home. He never has a ton of poop

Can I send you a picture? His name is ***** ***** I have no idea how old he is bc my son found him in the woods and wanted to nurse him back to health, so we let him keep him. He appeared dead when he first brought him home in November… *a pic of Wallace. Not his stool…

Veterinarian's Assistant: Is there anything else the Vet should know before I connect you? Rest assured that they'll be able to help you.

Wallace he never been super active. He will let my son hold him and he will sleep on his chest while we watch a movie… *Wallace has never

Hello! My name is***** and I’m a licensed veterinarian with experience in treating a wide variety of species, including dogs, cats, horses, farm animals, exotic pets (birds, reptiles, small mammals), fish and wildlife.

Just Answer is a forum for veterinary advice - we are not able to write prescriptions through the chat platform. We are here to guide you towards an answer for your pet questions to the best of our ability. Please be patient as it will take me time to review your information and provide detailed recommendations.

If you are experiencing a true medical emergency, please do NOT delay seeking in person emergency care for your pet.

If you have any photos or videos that may help me better understand your question, please share them here. If there are any other details or information about your question you would like to share, please provide them here and I will review them!

Please note, I am NOT available for phone consults at this time, but I am happy to help you through the chat feature here. Thank you for reaching out - we are here to help!

Customer reply replied 2 months ago
I think my son's lizard, Wallace, is dying. Not sure that you can help at this point 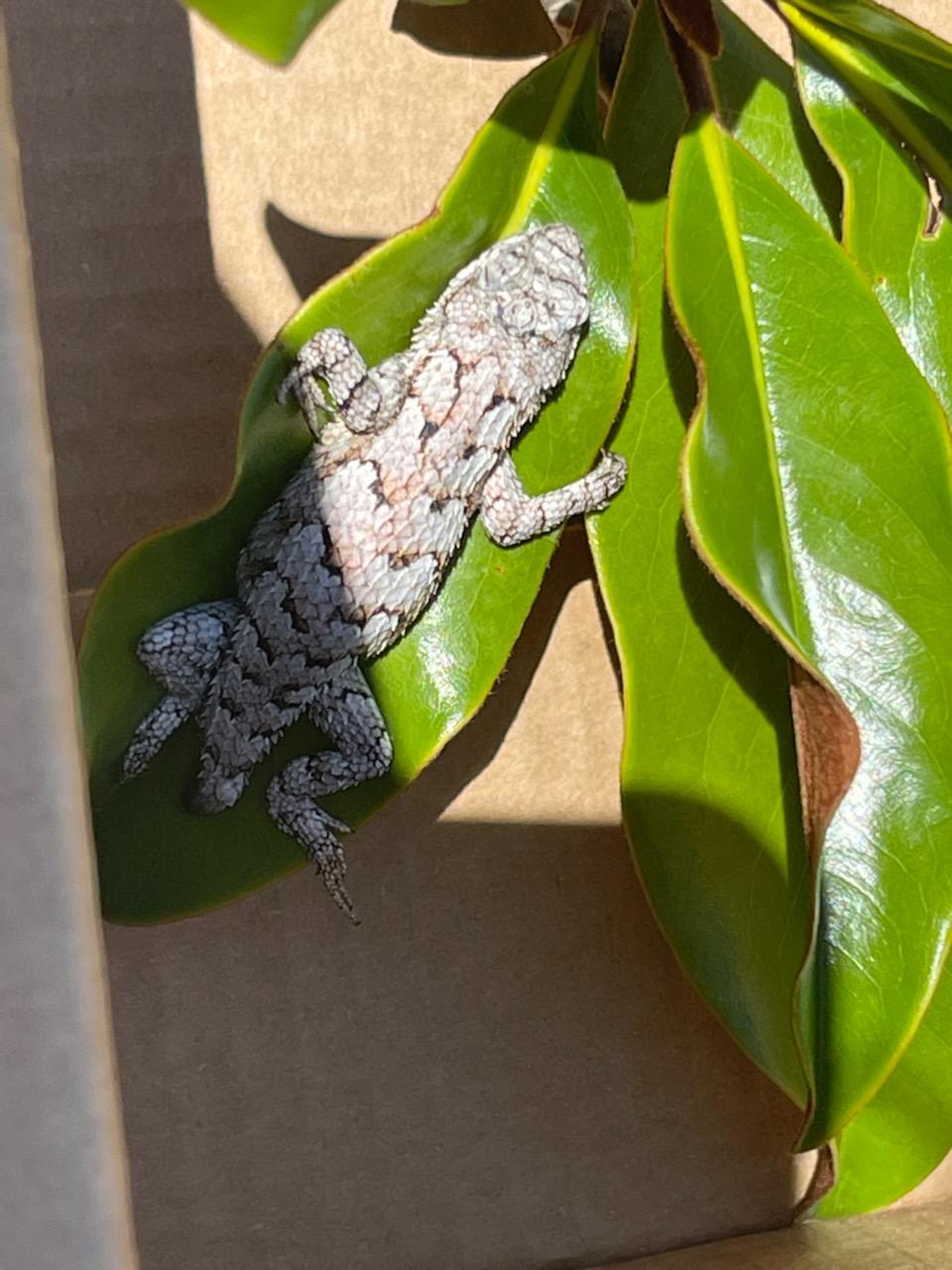 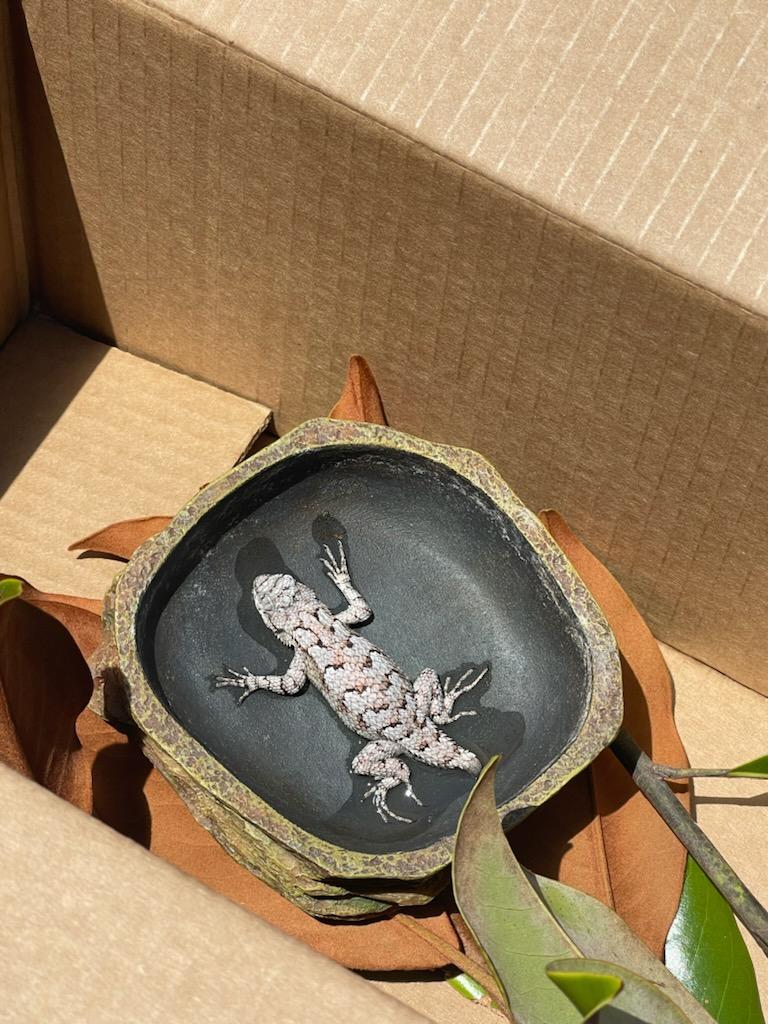 ce176ace-1ea1-42ae-9321...jpegce176a...jpeg
Customer reply replied 2 months ago
I put him in the sun in his water container. He seemed to be a little less lethargic but is now acting lifeless again...

Awww I am so sorry. Is he still moving at all?

That actually looks like a spiny lizard (without a tail)

Customer reply replied 2 months ago
He is barely moving... he did do a push up a few times from his front legs but has not moved his back legs... His tail had been torn off when my son found him in the woods in November ‍♀️Liked “That actually looks like a spiny lizard (without a tail)”He has blue on his belly and throat.

This is a care sheet with info on this species https://reptilesly.com/desert-spiny-lizard-care-sheet/

These guys actually need a LOT of heat but not so much humidity. Tampa May be too humid for him if he stays outdoors

Customer reply replied 2 months ago
Ok. Thank you. We suspect he was a pet and got out and that is how my son found him in the woods

He may have contracted parasites while he was outside as well, which can be very taxing on their system

Customer reply replied 2 months ago
We figured he was a desert lizard but I guess we had it wrong thinking he was an ornate tree lizard.Is there anything we can do? He hasn't been outside since NovemberCould he have a parasite since November and only now show signs??Or could he have gotten a parasite from wax worms?

First would be to review the husbandry requirements and make any adjustments ASAP. If he won’t eat or drink on his own, you can try syringe feeding some warm Gatorade or pedialyte, or even soak his body in those warm solutions

If they weren’t gut loaded for 48 hours before feeding, that is possible

I have another handout on feeding insects

If you need help to find a reptile vet near your area, this may help:

You are most welcome! I hope that helps with your question and please let me know if you have any other questions!

Once this question is concluded, the chat will still remain open for several days if you have any additional questions or follow ups that you would like to discuss.

If you would like my assistance in the future, you can ask customer support to forward your questions directly to me by starting your question with “For Dr. Adrien only” - I am here daily and will be happy to follow up.

It has been a pleasure assisting you and thank you for using Just Answer!

Customer reply replied 2 months ago
Thanks

Reptile Expert: Dr Adrien, Veterinarian replied 2 months ago
You are very welcome!
Was this answer helpful?
Yes
No

Chat 1:1 with a reptile expertLicensed Experts are available 24/7

Joan
Veterinary Technician
Private
9,649 satisfied customers
Hi, my son recently brought 2 chameleons home. We have been
Hi, my son recently brought 2 chameleon's home. We have been purchasing crickets for them to eat and I was wondering if they can eat crickets, grasshoppers, etc. that we catch outside or is the crusty… read more

Joan
Veterinary Technician
Private
9,649 satisfied customers
Show more
Disclaimer: Information in questions answers, and Show Less
Disclaimer: Information in questions, answers, and other posts on this site ("Posts") comes from individual users, not JustAnswer; JustAnswer is not responsible for Posts. Posts are for general information, are not intended to substitute for informed professional advice (medical, legal, veterinary, financial, etc.), or to establish a professional-client relationship. The site and services are provided "as is" with no warranty or representations by JustAnswer regarding the qualifications of Experts. To see what credentials have been verified by a third-party service, please click on the "Verified" symbol in some Experts' profiles. JustAnswer is not intended or designed for EMERGENCY questions which should be directed immediately by telephone or in-person to qualified professionals.

Thank you so much. Great knowledge of reptiles! Will use JustAnswer again if further problems arise.

Over 22 years experience with variety of reptiles, including pets and large collections