For Doug C 2007 Mitsubishi Outlander...
For Doug C
2007 Mitsubishi Outlander again! The motor in the driver's seat that moves the seat forward and rearward burned out/broke. The other motors work fine. Temporarily, I replaced the seat with a junkyard special in poor shape, but all the motors work. If I have to, I will replace the cushions on the junkyard seat with the originals, but I would rather just replace/fix the broken motor. Can I swap the motors, and if not, can I fix the broken motor? Rick
Show More
Show Less
Ask Your Own Mitsubishi Question
Share this conversation

Before addressing the question, I'm just curious did you try swapping just the switch from the donor seat first? We see the switches fail way more often than the motors.
Customer reply replied 7 years ago

YES. Both switches are good. What fun it was to try and jam the donor seat into the car to align with pigtail and test both switches before swapping seats.

Just wanted to rule that out in case we could avoid any extra work :)

The seat frames on the power seats are not meant to be disassembled. That doesn't mean it is impossible, however I would strongly advise against it. While I haven't tried on this model before, I have on other Mitsubishi power seats that they deemed non-serviceable, and they weren't joking in the least. It's more headache than it is worth, and you will do much better to just swap the skins between the two seats.

You will need the seats out of the vehicle for this process. It can be done, but it would be better doing the first out of the car so you get a feel for how things go together.

Remove the head rest of course.
Flip up the back of the seat back cover and unhook it. Depending on fabric or leather, and factory or port leather, you may have zippers to help you out here in addition to the standard U channels.
Roll the seat cover up toward the top slowly. Pay attention to the seating area side of the seat back. There are two types of attachment here; some have plain velcro but most have hog rings that need to be twisted open with pliers, then unhooked so you can roll the cover up farther.
When you get to the top of the seat back and the cover is just about fully inside out, you will need to remove the head rest guides. They just squeeze from below to release then push up and out. You can then remove the seat cover entirely. 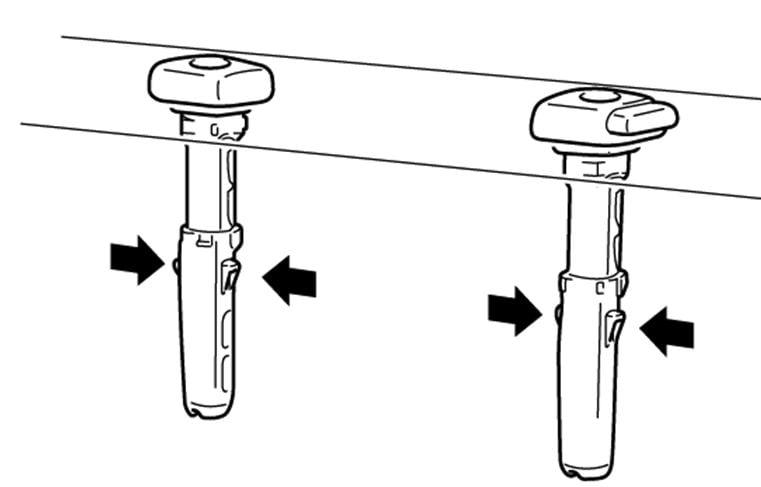 If you choose to swap the cushion, you can remove it at this time too. Do not mess with the air bag!

Flip the seat over bottom up and you should see some straps going from the back forward and hooked over the springs of the seat bottom. Pull these off the springs to loosen the cover, then push the flap through to the top side of the seat.
Around the perimeter (front and both sides) of the seat bottom the cover is attached via U channel. This is a plastic channel shape like a U that attaches it to the seat frame. At rest the channel is open end down, but installed it is twisted upside down, inward then slid over the frame of the seat. It will make more sense when you are looking at it.
Slide the three U channels off and you can then lift the cover off slowly, watching for hog rings. The seat bottoms do not usually have them, but it's the one time you don't check that it gets you, so go slowly just in case.
At this time you can lift the cushion off too. You will need to push the flap from the back through to the front like you did with the cover then you can lift the cushion off.


This can all be done in the car, however reinstalling the U channel on the console side of the seat will be extremely difficult. You can also remove the plastic side panels to assist you (philips screws), though it isn't necessary.

Verified
Doug and 87 other Mitsubishi Specialists are ready to help you
Ask your own question now
Was this answer helpful?
Yes
No

Chat 1:1 with a mitsubishi mechanicLicensed Experts are available 24/7

sprinkles08
Technician
High School or GED
19,733 satisfied customers
2007 mitsubishi outlander fuel pump location, still
we need to replace new one, i will do it my self , want to know where is fuel pump location … read more

Doug
ASE Certified Technician
Vocational, Technical or Trade Scho
8,677 satisfied customers
2004 Mitsubishi Lancer Sportback: temperature..controls..problem..fix
We have a 2004 Mitsubishi Lancer Sportback and the heater/ac temperature and air flow directional controls do not work anymore. What do think is the source of the problem and what needs to be done to … read more

Doug
ASE Certified Technician
Vocational, Technical or Trade Scho
8,677 satisfied customers
work right..instead of stopping when the antenna was fully expanded
I can't seem to get the power antenna function to work right. I put the "plastic teeth" part of the antenna down into the motor part until it stopped, then turned my radio OFF and it went down fine. B… read more

Doug
ASE Certified Technician
Vocational, Technical or Trade Scho
8,677 satisfied customers
Show more
Disclaimer: Information in questions answers, and Show More
Disclaimer: Information in questions, answers, and other posts on this site ("Posts") comes from individual users, not JustAnswer; JustAnswer is not responsible for Posts. Posts are for general information, are not intended to substitute for informed professional advice (medical, legal, veterinary, financial, etc.), or to establish a professional-client relationship. The site and services are provided "as is" with no warranty or representations by JustAnswer regarding the qualifications of Experts. To see what credentials have been verified by a third-party service, please click on the "Verified" symbol in some Experts' profiles. JustAnswer is not intended or designed for EMERGENCY questions which should be directed immediately by telephone or in-person to qualified professionals.

25 years in the auto repair business