Customer Question
Hello Doug. You helped me...
Hello Doug.
You helped me recently with advice regarding a 2002 TJ Magna VRX with a 5 speed manual gearbox.
The second-hand diff/gearbox has been supplied and fitted and the car is operational once again. Came with a three month warranty, too, which was a nice surprise. Some slight whining noises initially in second and third gear but they seem to be easing with a little bit of use. Not an LSD diff though; probably out of a 3 litre sedan. It has slightly longer 'legs' too which is much better; 80kph at 2000rpm and 120kph at 3000rpm (3000rpm used to give 110kph). Kept the old diff/gearbox though so it could be rebuilt at a later date if needed.

Next question: when I turn on the airconditioning, there is a noticible grumble from the driver side end of the motor.
My son believes that it is the airconditioning belt tensioning pulley. He did say that it has come off the car at some time in the past and that he had to re-fit on the roadside.
Again according to him, to repair whatever is causing the problem, the timing cover needs to be removed. My understanding is that a thread in the timing cover may be damaged. However, to me, it sounds like a bad bearing in the idler pulley and ideally I would like to replace the idler pulley/belt tensioning assembly but that is probably impossible if the retaining thread in the cover is shot.
Any idea on what is likely to be causing the problem, am I on the right track, any recommendations on what I can do to further identify the problem.
Regards
Barry Mann
Submitted: 9 years ago.Category: Mitsubishi
Show More
Show Less
Ask Your Own Mitsubishi Question
Share this conversation

Answered in 9 hours by:
Mitsubishi Mechanic: al-mod,  replied 9 years ago

I apologize for the delay getting back with you, I am "off" today :)

I glad to hear everything went smoothly with the new box. A slight bummer on the LSD, but hopefully you won't miss it much... this type of vehicle doesn't really 'need' it anyway with the type of driving they usually get.

WIth regard to the noise from the AC, but a tensioner or the pump itself are likely suspects. The best thing to do next is run the vehicle with the AC on so the noise is heard, and then get either a stethoscope, or a long screwdriver held to your hear, and probe around the pump as well as the tensioner(s) to determine which one is making the noise.
My primary suspicion would be the pump itself, reason being even with the AC off you would typically still have some noise if it were the belt tensioner pulley. It's not a rule or anything, as there are some noises that just require that heavy load from the AC pump to get them to make a racket... just something to keep in mind.

Using the stethoscope/screwdriver method you should be able to identify which component is causing the noise and then go from there as far as repair goes. The pump is pretty straight forward, the only thing to watch out for on those is if you have the early style pump that has a large external brass clutch with 8mm bolts around the perimeter.... make sure the bolts are tight. Those 8mm's will loosen up and make a racket. The later style units went to a traditional clutch to stop that, your's is rather borderline as far as which it would have.

Also on early style systems there are two tensioners/idlers on the AC belt; there is the tensioner from below between the pump and the crankshaft, but there is also an idler below the alternator/above the pump. This one can make noise as well. If this is the one you are concerned over being stripped, the block that it threads into IS replaceable for about $50-60 or of course a used one can be sourced. It is bolted in to the front of the compressor bracket that runs down the side of the block. If I recall correctly, these bolts are overlapped by the aluminum timing cover/motor mount support. It has been a while, but I am fairly certain that is the case on that bracket.

Now if we are talking about the tensioner down below, this is another story altogether. This one uses a bolt from behind and a nut to hold the pulley on. If the bolt strips out, you can simply drop it out the back after removing the nut and pulley. Keep this in mind though! If this is the pulley making noise, it is very common for them to go out of alignment when the belt is being tightened. When looking up from below and you see the 14mm adjuster bolt head, it should be roughly centered in the bracket. What will happen is as you tighten the belt the head will slide backward away from you. When this happens, it puts the pulley at an angle and when a heavy load (AC pump) is introduced, it will scream. So if you confirm the lower tensioner is the source, check the bolt alignment first, and then if it is OK replace the pulley.

I am attaching pictures of how the pulleys attach to help show what I am describing. First is the lower tensioner (note the fixing bolt slides in from behind) 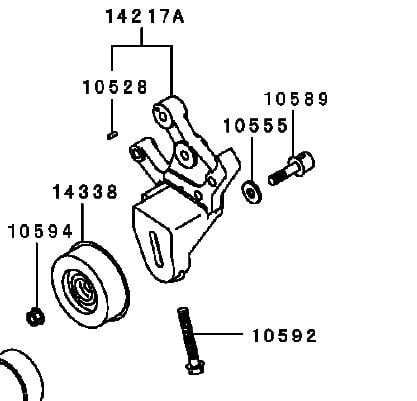 Next is the idler (again if equipped, this was eliminated around 2002-2003 stateside), note the separate bracket 87003 which is the mounting threads for the pulley, and how it bolts on to the pump bracket. 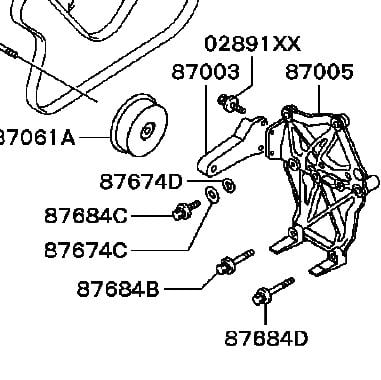 If you have any questions, as always just let me know. I am working short hours this week but I will get back with you as soon as I am able.

Verified
Doug and 87 other Mitsubishi Specialists are ready to help you
Ask your own question now
Was this answer helpful?
Yes
No

Chat 1:1 with a mitsubishi mechanicLicensed Experts are available 24/7

Greg
Shop owner, technician
Vocational, Technical or Trade Scho
7,347 satisfied customers
1997 mitsubishi: V6..power on acceleration..rough..park
I have a 1997 Mitshubishi Magna V6 TE Executive that in the last couple of days has been losing power on acceleration. It seems to idle fine however when giving it a boot full it seems to have a dead … read more

Doug
ASE Certified Technician
Vocational, Technical or Trade Scho
8,677 satisfied customers
Show more
Disclaimer: Information in questions answers, and Show More
Disclaimer: Information in questions, answers, and other posts on this site ("Posts") comes from individual users, not JustAnswer; JustAnswer is not responsible for Posts. Posts are for general information, are not intended to substitute for informed professional advice (medical, legal, veterinary, financial, etc.), or to establish a professional-client relationship. The site and services are provided "as is" with no warranty or representations by JustAnswer regarding the qualifications of Experts. To see what credentials have been verified by a third-party service, please click on the "Verified" symbol in some Experts' profiles. JustAnswer is not intended or designed for EMERGENCY questions which should be directed immediately by telephone or in-person to qualified professionals.

25 years in the auto repair business

Many years of experience working on all models of Mitsubishi.