Honda CR-V We have a serious problem with our 99 Honda CRV.

We have a serious problem...
We have a serious problem with our 99 Honda CRV. Our mechanic is a good guy and is trying to help us and although he has worked on Honda's as well as many other cars for years he really isn't an expert on the Honda product line as you all are. He asked me to look into the problem and see what I could find out about it. He rebuilt the engine heads and replaced the rings on our Honda but there is a serious problem that won't go away even after we have purchased and replaced several low mile parts that he has suggested.

We have another problem with the car that the mechanic was thinking could possibly be related to the idle issue, but that's just a guess. An internal transmission scan code appears. The car shifts slowly and with delay from second to third. He thinks there is a possibility that the computer might have gone bad and might be sending erradic signals.

In trying to fiz the problem we have replaced the following parts, one new and the others from low mileage engines.

The distributor on this car pulls right out and doesn't have any gears on the bottom, it has just a few round seals on the bottom and goes in one position.

I was reading about the "Top Dead Center" alignment with cylinder #1, but isn't that only for distributors with gears ?

The mechanic has been able to get the car not to shut off by forcing the distributor position slightly passed the boundary mark of the mounting screws. This leads me to believe it is definitely a distributor timing problem.

Can you help ?
Show More
Show Less
Ask Your Own Honda Question
Share this conversation

The base ignition timing can be adjusted, and it does sound like this needs to done at this point.

If, after doing the timing, the engine still has the idling issues and the shifting issues, then the TP(throttle position) sensor needs to be tested and replaced if needed, and those testing directions are below the timing directions

give these directions to your mechanic to set the base timing: 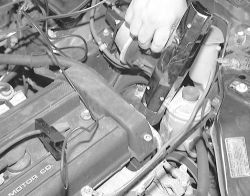 Fig. Fig. 1: The inductive lead of the timing light is placed around the No. 1 spark plug wire; and the light is aimed toward the marks on the crankshaft pulley. 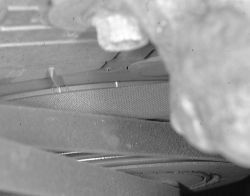 Fig. Fig. 2: The red ignition timing mark on the crankshaft pulley is lined up with the pointer. The two small notches on either side of the red colored notch represent the plus (+) or minus (-) 2° increments. The white notch to the far right is Top Dead Center (TDC)


The white mark on the crank pulley is Top Dead Center (TDC). 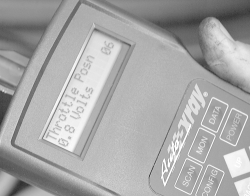 Fig. Fig. 3: The TP sensor can be monitored with an appropriate and Data-stream capable scan tool

The mechanic said that he was fairly certain that the Throttle position sensor was in the correct position. He said his computer reported it as being in the correct postion. I know you sent me the instructions but if you could just mention where does the Base ignition timing get adjusted, is it the distributor position ?

Question are your answers emailed to me at [email protected] so I can have them for reference ?

yes, the answers should be sent to the email address you signed up with.

the base ignition timing is accomplished by turning the distributor housing. that is listed in the directions above.

Although the TP sensor is in correct position, if it isnt sending proper signal or a voltage issue, it will cause both the idle issue and the shifting issues, so I would have the mechanic do the test given above

Verified
Eric and 87 other Honda Specialists are ready to help you
Ask your own question now
Was this answer helpful?
Yes
No

Chat 1:1 with a mechanic for hondaLicensed Experts are available 24/7

Technician Chris
Vocational, Technical or Trade School
366 satisfied customers
Honda Accord DX: My 89 honda accord,just stopped running while
My 89 honda accord,just stopped running while I was driving 25 miles an hour. It will not start again. It has 92k. The timing belt is not turning and I have no spark. However have brand new spark plug… read more

Dan
Automotive Technician
Vocational, Technical or Trade Scho
24,999 satisfied customers
2002 Honda: van is going to stall..and drives..whole fuel system
We have a 2002 Honda Odyssey and have been having issues with it. While driving, when the tacometer falls below 1, the engine loses power....we accelerate....and for a few seconds, nothing happens....… read more

Steve
technician/service adviser
Bachelor's Degree
3,499 satisfied customers
1992 Honda Accord LX: cyl..parked..just shut off.It does have gas
I have a 1992 Honda Accord LX 4 cyl. It was parked and running and just shut off. It does have gas. Wont start back up. Electricity goes in the ignition coil but doesn't come out the other end. Replac… read more

johnny civic
Vocational, Technical or Trade Scho
133 satisfied customers
Honda accord: temperature gauge is at hot..put water..the reservoir
I have a Honda accord 1993. The problem i am having is that within 3 minutes of turning on the care and driving it the temperature gauge is at hot and pushing past that. I have tried to put water and … read more

Eric
Automotive Repair Shop Manager
N/A
48,826 satisfied customers
96 Honda accord: ac compressor..gauges..recharged..fine till
I have a 96 Honda accord the ac compressor would not kick on I put on a set of gauges seen it was low recharged system worked fine till compressor got warm it started kicking on and off again then I n… read more

MASTER TECH
Master Tech
Vocational, Technical or Trade Scho
5,763 satisfied customers
1994 Honda civic EX: ideling..stop light..jumps..diagnostic testing
I have a 1994 Honda civic EX while ideling or sitting at a stop light the tackometers jumps and feels like the car wants to shift into gear and move forward.. I have brought it to a mechanic and are u… read more

thebesthonda
Service Center Owner / Technician
High School or GED
3,084 satisfied customers
97 honda civic: car started..radiator, thermostate, fan sensor switch
I have a 97 honda civic. The car started to over heat and there was a hole in the radiator. I replaced the radiator, thermostate, fan sensor switch. It's not the water pump. I took it out for a drive … read more

thebesthonda
Service Center Owner / Technician
High School or GED
3,084 satisfied customers
1993 honda civic: lx..the rpm idels..throttle body..radiator cap
i have a 1993 honda civic 1.5liter lx when i start my car in the morning the rpm idels at 2000rpm then when its trying to warm up the needle goes up and down from 1500rpm to 2000 up and down up and do… read more

Jerry
Vocational, Technical or Trade Scho
50 satisfied customers
Show more
Disclaimer: Information in questions answers, and Show More
Disclaimer: Information in questions, answers, and other posts on this site ("Posts") comes from individual users, not JustAnswer; JustAnswer is not responsible for Posts. Posts are for general information, are not intended to substitute for informed professional advice (medical, legal, veterinary, financial, etc.), or to establish a professional-client relationship. The site and services are provided "as is" with no warranty or representations by JustAnswer regarding the qualifications of Experts. To see what credentials have been verified by a third-party service, please click on the "Verified" symbol in some Experts' profiles. JustAnswer is not intended or designed for EMERGENCY questions which should be directed immediately by telephone or in-person to qualified professionals.

Your answers were clear and the diagrams were perfect. Dealer wanted $87 for an hour of labor and even I did it in 15 minutes.

HONDA PLATINUM was great. I really appreciate his help. I was ready to trade my new Honda until he told me to wait until I got 3,000 miles on it and my gas mileage would get much better.

Thank you very much for saving my daughter and her family a lot of money on her Honda. You are definitely on my list for future help. Thanks, again.

I took the Power Steering O-Ring service bulletin linked from JustAnswer to my Acura dealer, and not only did they no-charge the o-ring, they also replaced the power steering pump at no cost.

OVER 20 YEARS OF EXPERIENCE WITH 10 YEARS ACURA/ HONDA