Thank you yet again for...
Thank you yet again for your information which I am using to verify my findings on ancestry.com Yet another question! My great grandmother Mary Ellen Liddell (Perkins) was born to William Liddell and Martha Tucker 22/2/1863 in Liverpool. I cannot find a marriage certificate between William and Martha, nor a death certificate for William.
Show More
Show Less
Ask Your Own Genealogy Question
Share this conversation

Answered in 16 hours by:
Genealogy Expert: A. Schuyler, Genealogist replied 26 days ago

I didn't find a marriage record for William Liddell and Martha Tucker either. Since they were both born in Durham, I checked marriages there. The 1851 census says William was 20 (b abt 1831) and Martha was 19 (b abt 1832), so they can't have been married very long.

There is record of a marriage between William Liddle[sic] and Martha Robson 02 Feb***** Nicholas, Durham. Their ages are given as 20 and 19, respectively.

There were lots of William Liddells (various spellings) who died in the 10 years after Mary Ellen's birth. Without a date, there is no way to sort them out. 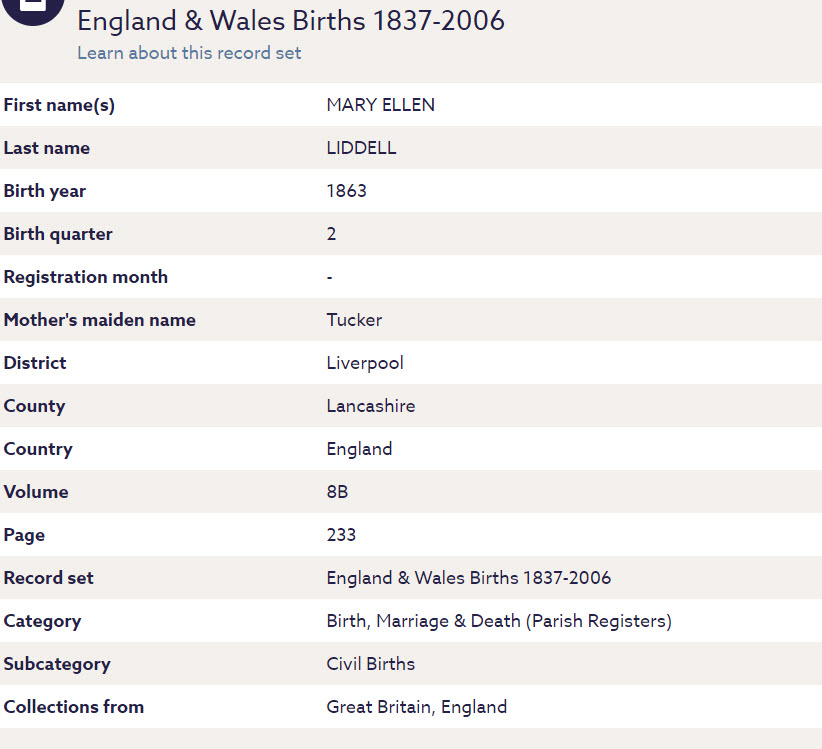 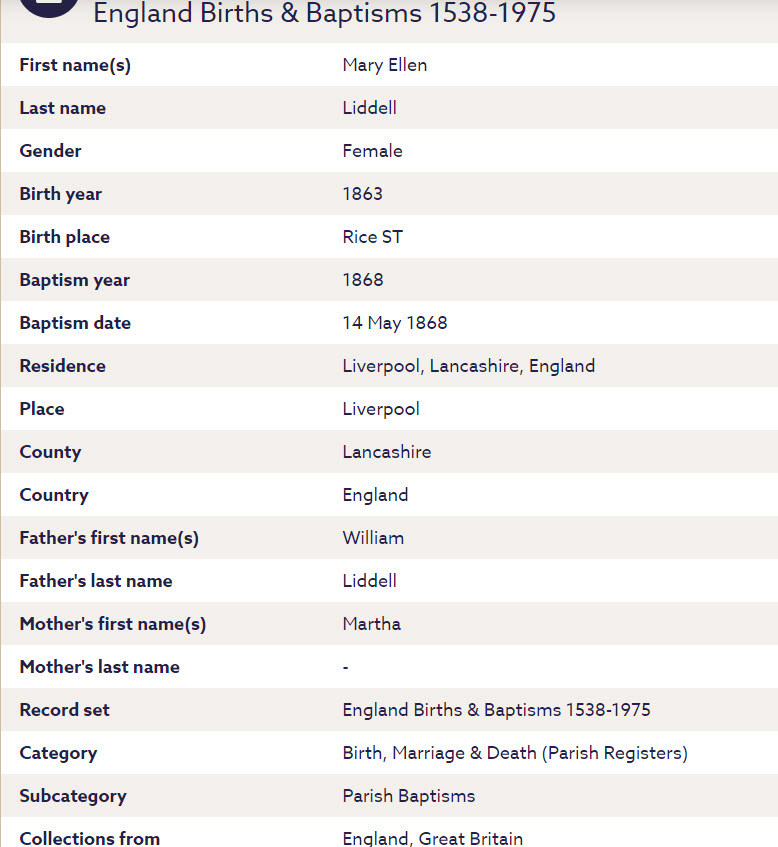 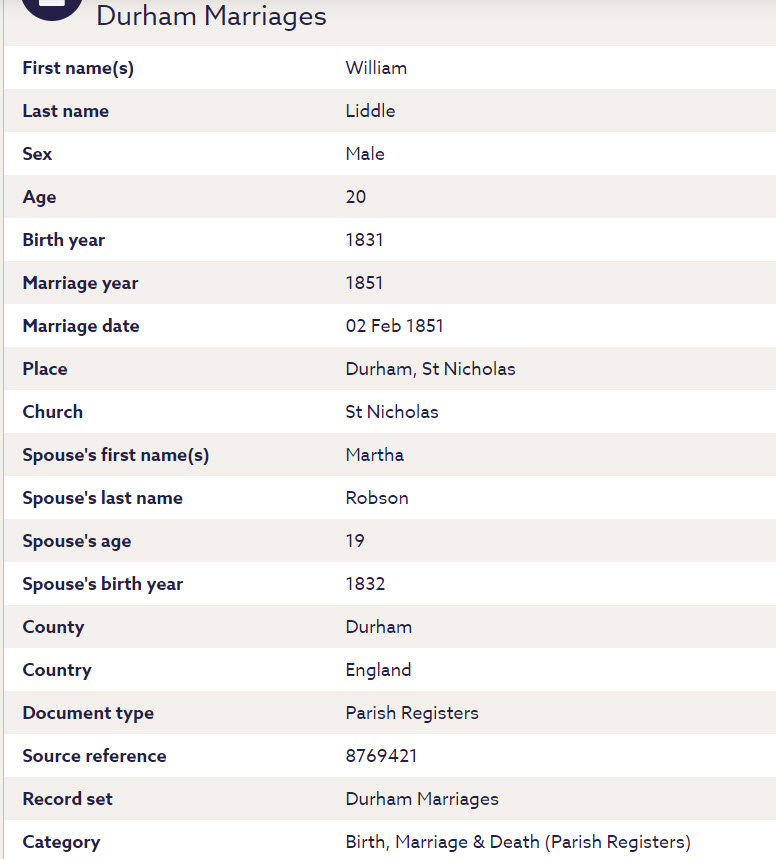 Verified
A. Schuyler and 87 other Genealogy Specialists are ready to help you
Ask your own question now
Customer reply replied 26 days ago
I have double checked information you’ve provided regarding Janet Birrell and Charles Dick against information I have gathered and I hope you can help me to get some clarity. To be honest, the more I dig the more confusing it becomes.
I’m aware that I’m supposed to ask only 1 question at a time but it would mean I’d have to write a letter every day for a week, with each letter being a continuation of the previous letter, thus making the process quite disjointed. I’m approaching 70 and to be honest, my brain isn’t up to it. If your guidelines allow only one answer a day I can work with that.I assume that Janet and Jessie Birrell, are the same person. However, I’m trying to figure out which Janet I am related to - there are 4, all with different birth dates, and as far as I can gather, it appears they all married a Charles Dick who was a Brewer! I don’t have the expertise to research and confirm it with certainty. I’ll attempt to explain what I’m struggling with in such a way that you can understand why I’m confused and hope you can help me.Your information - Andrew Birrell married Janet Walker in St Cuthberts 1804.
Records FHL fil number(###) ###-####ref ID 2:17RVS6T - they had a daughter, Janet Birrell born 17/12/1814. (See 1841 census re Jessie Dick and Janet Walker, both age 20)Old Parish Registers births - 11/11/1819 Janet Birrell, parents Andrew Birrell and Christian Peggy - Falkland. This birth year has shown up in a number of ancestry.com fact sheets for Janet/Jessie.To add to the confusion there was a Janet Birrell born 23/9/1821 to William Birrell and Catherine Motto - Parish St Cuthberts! (See 1841 Census)Old Parish Registers marriages - St Cuthberts, 22/10/1839 Charles Dick married Jessie Birrell - father Andrew Birrell.1855 Valuation Roll - Charles Dick, Brewer, employed Alexander Birrell (difficult to read) - I assume Janet/Jessie’s brother - would finding his parents names confirm hers?Scotland Census
1841 - Charles Dick Brewer, age 20 birth year about 1821, Mrs Jessie Dick and Janet Walker both age 20. See above, Janet Walker is the name of Jessie Birrell’s mother. Parish St Cuthberts.
1861 - Charles Dick Brewer, wife Jessie Dick (Janet Birrell?) both age 42 birth year 1819, parish St Cuthberts.
I believe their son Harry, born 1852, is my great grandfather. On his marriage certificate - Invercargill 1894, his parents names are***** and Janet Birrell.Dean 2E cemetery Edinburgh - Jessie Birrell wife of Charles Dick, born 1816, died 1870 age 54.
In the same grave there are 2 Charles Dick -1817-1864 age 46; 1843-1864 age 21, son of Charles Dick.As mentioned previously, the 1861 Scotland Census states born 1819, and the 1841 Census born ‘about’ 1821!
Is it common for errors to be made in the census records? Maybe people lied about their age?? Transcribing errors???I struggle to believe there was more than one Janet Birrell married to a Charles Dick - all Brewers!!You researched Charles’ father’s name for me, his parents were supposedly Charles and Jean. You found a record of a Charles Dick born 1817 to William Dick and Jean, and you wondered if he may have been William Charles or Charles William? A tree search on ancestry.com names William Dick 7/11/1790 - ? wife Jean Cameron 1790 - ? That would make them only 17 years old when Charles was born!Newspaper Articles
28/1/1837 - William Dick, brewer, in consequence of his brother Peter’s death, has assumed as his partner, his nephew Charles Dick - it appears that this William is not Charles’ father.
Could there be 2 William Dick’s? Both with a son named Charles??
9/2/1839 - In consequence of William Dick’s death the business will hereafter be carried on under the firm Charles Dick.
1864 Charles and his son Charles died the same year.
1867 - Janet Birrell or Dick, and William Dick, brewer (son I assume) ceased from having any interest in the business of Charles Dick & Son. (I am unsure of when it became Charles Dick & Son - according to records, his son Charles was also a brewer)
January 1869 - Janet Birrell or Dick - bankruptcy court.
1864 and 1867, Jessie is now Janet - possibly her legal name which was required for cases such as this?I would be grateful for any assistance you can offer in helping me in the matters raised. As I said earlier, if you are only able to answer one of my questions per day I’ll accept the terms and will eagerly await your replies!

You can paste and copy the questions you have about the Charles Dick/Birrell family into a new question here:

A. Schuyler
Genealogist
17,787 satisfied customers
Show more
Disclaimer: Information in questions answers, and Show More
Disclaimer: Information in questions, answers, and other posts on this site ("Posts") comes from individual users, not JustAnswer; JustAnswer is not responsible for Posts. Posts are for general information, are not intended to substitute for informed professional advice (medical, legal, veterinary, financial, etc.), or to establish a professional-client relationship. The site and services are provided "as is" with no warranty or representations by JustAnswer regarding the qualifications of Experts. To see what credentials have been verified by a third-party service, please click on the "Verified" symbol in some Experts' profiles. JustAnswer is not intended or designed for EMERGENCY questions which should be directed immediately by telephone or in-person to qualified professionals.