My great great great grandmother Anna Zudock was reportedly the source of Jewish ancestry according to my grandmother. In doing DNA recently it verified we have Ashkenazi Jewish. I just want to find more information.

Expert's Assistant: I did a little digging into my family history: we have a lot of dead eccentric Brits in our family tree. I hope you find some fascinating characters in yours. Please tell me everything you can so the Genealogist can help you best.

Expert's Assistant: Is there anything else important you think the Genealogist should know?

Show More
Show Less
Ask Your Own Genealogy Question
Share this conversation
Have a specialty? Apply to be an Expert
Customer reply replied 2 years ago
curious about immigration records came over 1907

Answered in 12 hours by:
Genealogy Expert: A. Schuyler, Genealogist replied 2 years ago

More information is required before research can begin. For instance, you note that Anna was born in 1891 but didn't say where.

I also need to know her maiden name to learn anything more about her birth. When she came to this country in 1907 was she already married to John Zudock? If not, when and where did they marry?

Customer reply replied 2 years ago
that is the problem I would love to find marriage information as I don't know her maiden name? She immigrated from Austria-Hungry but language listed on 1920 census is Slovak. Aslo her husband's full name was Clement John Zudock. Found naturalization form where she is listed as Annie Zudock spouse. No maiden name. Want to know more of who she is possibly a maiden name.

Without a marriage record there is no way to determine her maiden name.

The Zudocks on various records say they were from Austria, Galacia and Hungary. John's naturalization record says he was born 24 Oct 1886 in Budapest, Austria. So we know he was actually from Hungary.

I found their marriage license and the marriage record. John Zudock and Anna Shucnock were married in Manifold, Washington Co., PA on 22 Nov 1910 by the Rev. Theodore M Vasochik.

I found no immigration records for Shucnock or anything similar. The LDS research center is down tonight so I've been able to find nothing there.

Customer reply replied 2 years ago
that is awesome thank you, ***** ***** the Anna Shucnock as that is my mothers grandmother and her husband John Zudock my moms grandfather. Really cool to know when they were married and how her grandmothers maiden was spelled. However the big mystery is Trying to find the maiden name and immigration information on John Zudock ( my moms grandfather and one your found his father and mother) parents Clement and Anna Zudock who I have found is Clements immigration form with his wife listed. The origins in Hungary are spot on to the stories I heard but they weren't ethically Hungarian. So anything you can find on Clement or Anna Zudock marriage record especially to get a maiden name. From my grandmother's stories it is her father mother Anna Zudock wife of Clement who was the Jewish grandparent. Looking for any records of these two. Thank you so much. Appreciate the help solving this puzzle. My mom passed away from cancer this year and I am trying to find out as far back as we know about her line. Thanks again Ann

Clement Zudock's s wife's maiden name was Lembeck. Anna Lembeck and Clement Zudock are buried in Calvary Cemetery in Porter Co., IN. According to his naturalization record, their children John, Mary, Julia, and Frank were born in Hungary, while Annie was born in Fitzhenry, PA in 1901. THe family arrived in New York on the ship Palatia in April 1900.

I found no record of the marriage of Clement and Anna Lembeck. That isn't particularly unusual give the number of records destroyed in the war. Nor were their records for the births of their children.

Have you done a MtDNA test. That would show if your Ashkanazi blood was on her side.

Customer reply replied 2 years ago
Those are the children who John Zudock would be my moms grandfather and her mom's father. Amazing I am so happy with this information I can't believe you found it I was searching for hours only found small bits of information. Thank you so much amazing!do you have dates of death for Clement and Anna Zudock?

I'm so happy you are pleased with my work. That is always delightful to hear.

Clement Zudock died in 1931 and Anna Lembeck Zudock in 1935. Copies of their death certificates are below.

Here is a link to their tombstone: 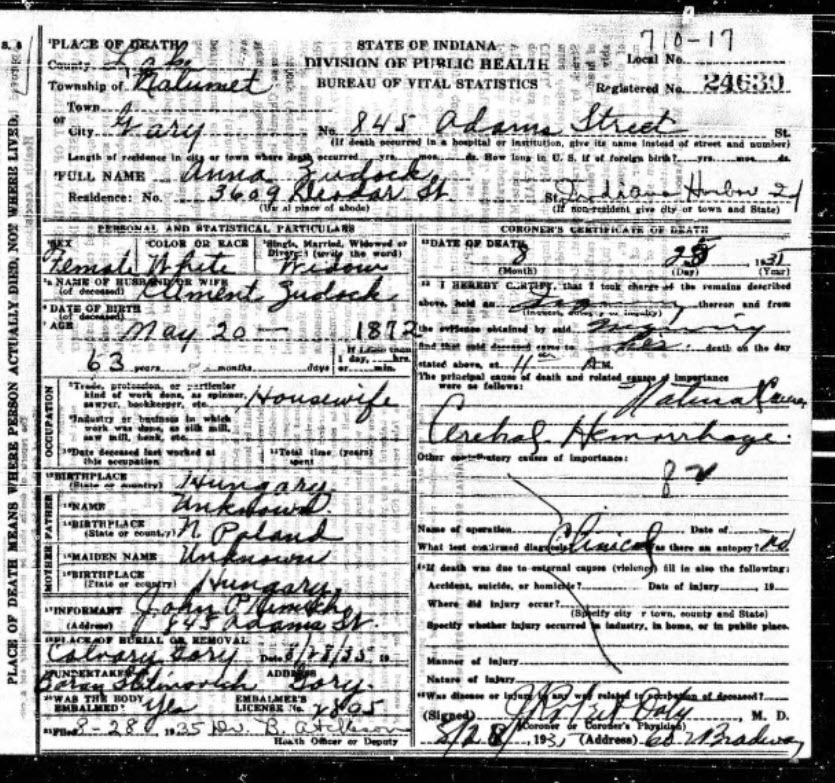 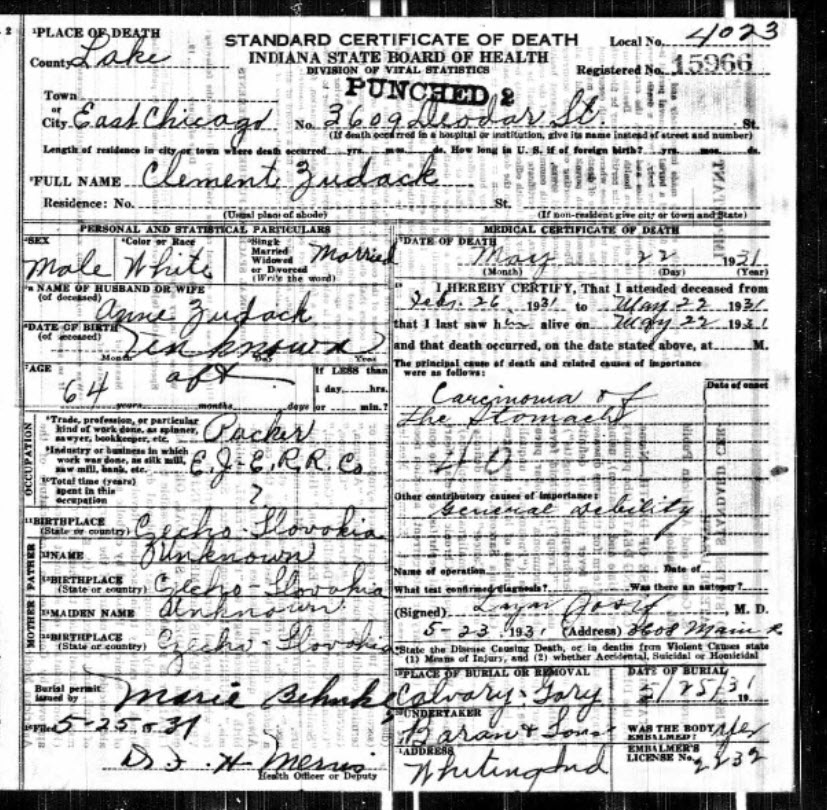 I sincerely ***** ***** I have helped you, and that I have earned my 5 star rating today! We are on the honor system at Just Answer, so please remember to rate my service by selecting the 5 stars at the top of the screen (rating me now does not close your question). We can continue here until you are satisfied, simply use the reply box and let me know.

Verified
A. Schuyler and 87 other Genealogy Specialists are ready to help you
Ask your own question now
Customer reply replied 2 years ago
thank you totally did 5 star rating....
I have a question maybe you can give some insight to So In doing more research found the wife of Clement Zudock , Anna Zudock her maiden name Lembeck spelled what you found as well as Lembig, Lembic...are all these different names, variations of the name, I don't know which one most correct and aslo trying to find her family records in Hungary maybe a birth record.....at any rate any insight...
thanks again....Ann

Thanks so much for the rating. Spelling was not a big deal until fairy recently. Even the clergy wrote names phonetically as often as not. In English, the German name Lembig sounds like Lembeck.

Another interesting name is ***** ***** name Margaret. The nickname is ***** ***** German as well as English, but it's pronounced more like "Pecky." I can't begin to tell you how many girls I see referred to as Rebecca ("Becky") when their real name was Margaret.

When researching German ancestors it pays to look for all reasonable variations of a name (and some not so reasonable). That goes for both given and surnames.

Lots of birth records were destroyed during the war with all the bombings and subsequent fires.

It does look like she used Lembeck in this country though. Here is the church record f the 1925 marriage of her son Frank.

Other information in the record of Frank Zudock and Mary Isablic:

You're so very welcome!

100% satisfaction guaranteeGet all the answers you need
Share this conversation
Have a specialty? Apply to be an Expert
Related Genealogy Questions
My grandmother was named Orlop. She was born in either.
My grandmother was named Anna Orlop. She was born in either. Poland, Estonia or the Ukraine. She told us she was Polish; after her death we found her immigration papers which said she claimed to be fr… read more

A. Schuyler
Genealogist
17,999 satisfied customers
Show more
Disclaimer: Information in questions answers, and Show More
Disclaimer: Information in questions, answers, and other posts on this site ("Posts") comes from individual users, not JustAnswer; JustAnswer is not responsible for Posts. Posts are for general information, are not intended to substitute for informed professional advice (medical, legal, veterinary, financial, etc.), or to establish a professional-client relationship. The site and services are provided "as is" with no warranty or representations by JustAnswer regarding the qualifications of Experts. To see what credentials have been verified by a third-party service, please click on the "Verified" symbol in some Experts' profiles. JustAnswer is not intended or designed for EMERGENCY questions which should be directed immediately by telephone or in-person to qualified professionals.