My dog has been scratching his legs, tail and back non-stop.

Customer Question
Hi! My dog has...

Hi! My dog has been scratching his legs, tail and back non-stop. He has a couple rashes and something that looks like it could be a fungus. We’ve given him antihistamines and it helped a little but he’s struggling with it.

Veterinarian's Assistant: Hi there. I'll do all I can to help. When did you first notice the rash? Has the dog been licking or rubbing the skin?

Can you upload a photo(s) of representative skin to our conversation? You can use the paper clip icon above your message box (if you can see that icon) or an external app such as dropbox. You can also send them to***@******.*** but it can take up to 24 hours to reach me in that manner. 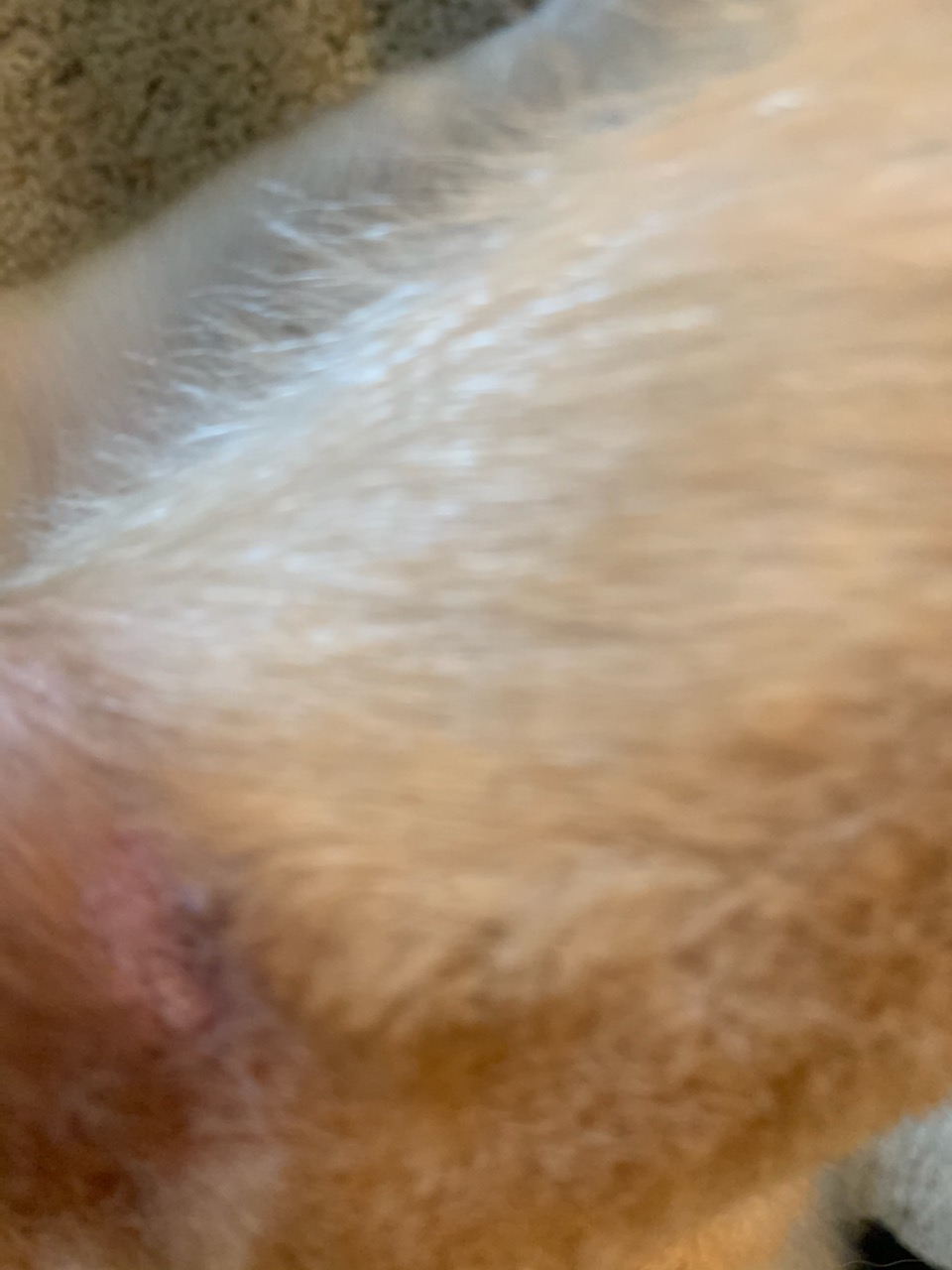 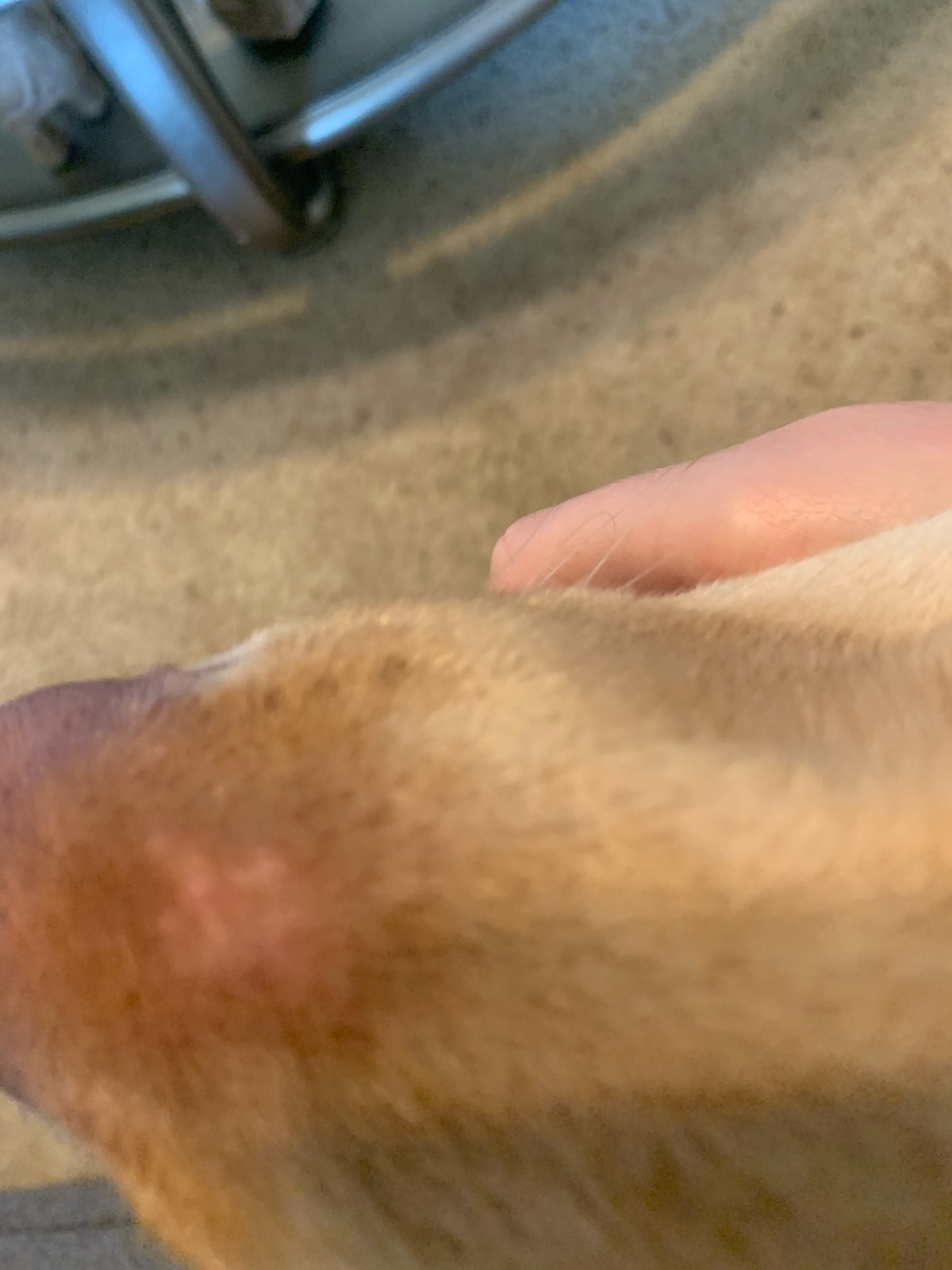 Thank you. Give me a moment to take a look, please.

Regrettably, the photos are too out of focus to assess properly. Please try backing your camera away a few inches and photograph the areas again.

Customer reply replied 14 days ago
Ok, I'm on a work call right now, will do it in a bit 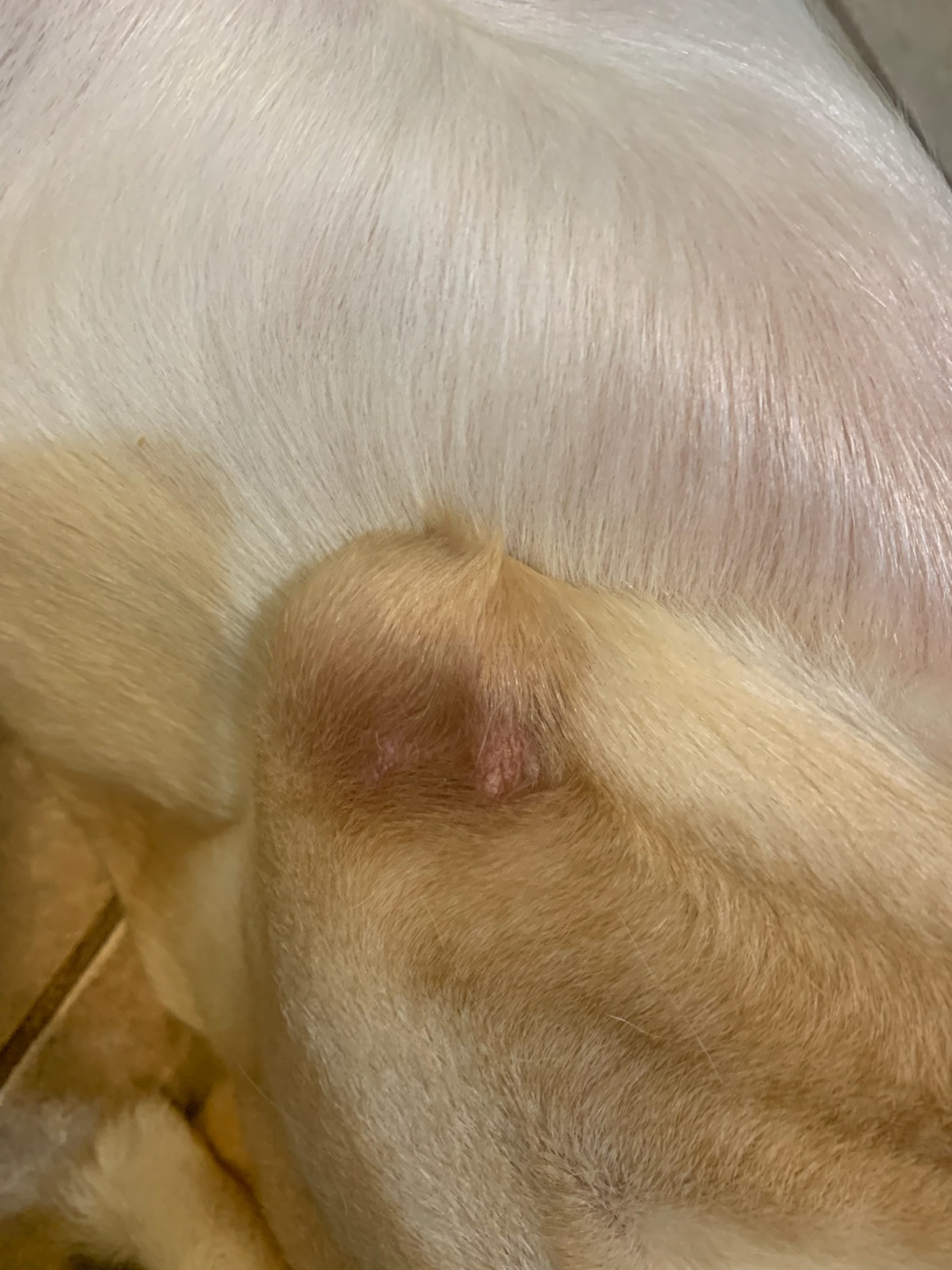 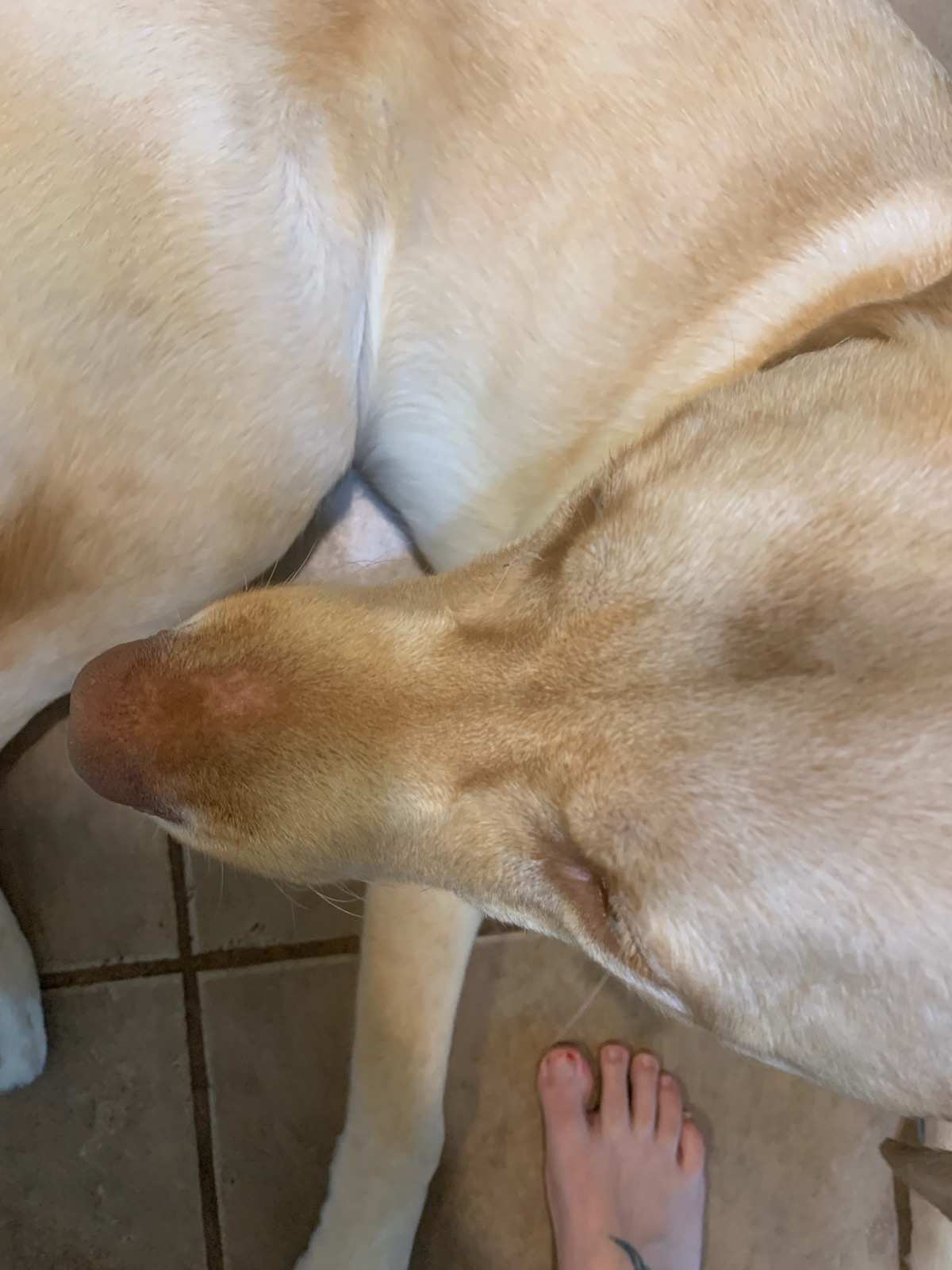 I appreciate your efforts. The lateral elbow skin is forming a callus which then protects the area from further insult. The alopecic spot on his snout is nonspecific but likely due to his rubbing his snout because it itches. I'll post my entire synopsis of the itchy dog for you:

Pruritic (itchy) dogs are suffering from allergic dermatitis in the great majority of cases. Allergies to flea saliva, environmental allergens (atopic dermatitis) such as pollens, molds, dust and dust mites, and foods should be considered. (Anus, paw and extremity licking indicate both atopy and food intolerance and so it behooves vets to distinguish one from another.) In many instances, a concomitant pyoderma (bacterial skin infection), yeast infection (Malassezia), or mange mite (Demodex or Sarcoptes) might be contributory.

Kuma's vet can check a sample of representative skin surface microscopically (a “cytology”) for abnormal numbers of bacteria and yeast and skin scrapings can be taken in an attempt to find mites. Pyoderma is treated with a minimum of 3-4 weeks of an antibiotic in the cephalosporin class such as cephalexin (Keflex) and yeast is addressed with ketoconazole for at least a month. Mites are addressed topically, orally, and by injection.

Our dermatologists tell us to apply an over the counter flea spot-on such as Advantage/Advocate, a fipronil-containing product such as Frontline or, preferably, one of the newer prescription products available from Kuma's vet to which fleas are less likely to have become resistant even if fleas aren’t seen. Dogs can be such effective groomers so as to eliminate all evidence of flea infestation. Dogs who remain primarily indoors can contract fleas because we walk them in on us and flea eggs and larva can remain viable in your home for months. As the weather warms or you turn on heaters at this time of year, egg hatches are common. If the area between the edge of Kuma's rib cage and tail (the “saddle” area) is particularly excoriated, a flea saliva allergy should be an important differential diagnosis. In severe cases, an anti-allergenic prescription glucocorticoid (steroid) such as prednisone will work wonders for dogs allergic to the saliva of the flea. If you have other pets they may have fleas too but may not be allergic to the flea’s saliva. Be sure to treat your premises with a product such as over the counter Siphotrol Area Treatment spray which contains the insect growth regulator (IGR) methoprene which doesn't allow flea eggs and larvae to develop into adult fleas thus breaking up the life cycle of the flea. Avoid inefficient foggers that can't reach under furniture or into cracks and crevices where flea eggs and larvae are found.

Environmental allergies (atopy) are usually initially addressed with prednisone as well. In some dogs an over the counter antihistamine such as chlorpheniramine (many generics) at a dose of 0.1 - 0.25 mg/lb (maximum) every 8-12 hours or diphenhydramine (Benadryl) dosed at 1-2 mg/lb every 8-12 hours (maximum dose of 50 mg at any one time) may be effective. Antihistamines, however, aren’t reliably effective. Adding fish oil to the diet at a dose of 20mg/lb daily of the EPA in the fish oil might synergize with antihistamines to provide better anti-pruritic action. The omega-3 fatty acids in fish oil are anti-inflammatory but may take 8-12 weeks to kick in. The cytokine antagonist oclacitinib (Apoquel) is likely to revolutionize how we address atopic dogs and should be discussed with Kuma's vet. Oclacitinib works as well as a steroid without a steroid's adverse effects. The injectable immunomodulatory drug IL-31 (Cytopoint) should also be considered. Please note that atopy, at least initially, should have a seasonality to it while a food intolerance should cause pruritis regardless of the season. Chronically atopic dogs may be pruritic year-round.

Food intolerance/allergy is addressed with prescription hypoallergenic diets. These special foods contain just one novel (rabbit, duck, e.g.) animal protein or proteins that have been chemically altered (hydrolyzed) to the point that Kuma's immune system doesn't "see" anything to be allergic to. Over the counter hypoallergenic foods too often contain proteins not listed on the label - soy is a common one - and these proteins would confound our evaluation of the efficacy of the hypoallergenic diet. The prescription foods are available from his vet. There are many novel protein foods and a prototypical hydrolyzed protein food is Hill’s Prescription Diet z/d ultra. (I prefer the hydrolyzed protein diets because they lessen the possibility of my patient being intolerant to even a novel protein.) A positive response is usually seen within a few weeks if we’ve eliminated the offending food allergen. Food intolerance can arise at any age and even after our patient had been eating the same food for quite some time.

We need to consider seborrhea in such a patient as well. This is a skin disorder of keratinization and maturation. It's a diagnosis of exclusion of the above-mentioned skin disorders and can be suggested by skin biopsy.

You also have the option of having a specialist veterinary dermatologist (please see here: www.acvd.org) attend to Kuma. You can expect some combination of skin scrapings, cytology, bacterial culture and sensitivity, fungal culture, skin biopsy, intradermal or blood allergy testing, or presumptive hypoallergenic diet trials to be performed.

Please respond with further questions or concerns if you wish.

Chat 1:1 with a dog veterinarianLicensed Experts are available 24/7

DocPaul
Doctoral Degree
36,028 satisfied customers
My silky has a white blood cell count of 10.000. My 11 yr my
He has a skin infection we are giving him medicated baths … read more

Dr. JD
veterinarian
Doctoral Degree
1,402 satisfied customers
Show more
Disclaimer: Information in questions answers, and Show More
Disclaimer: Information in questions, answers, and other posts on this site ("Posts") comes from individual users, not JustAnswer; JustAnswer is not responsible for Posts. Posts are for general information, are not intended to substitute for informed professional advice (medical, legal, veterinary, financial, etc.), or to establish a professional-client relationship. The site and services are provided "as is" with no warranty or representations by JustAnswer regarding the qualifications of Experts. To see what credentials have been verified by a third-party service, please click on the "Verified" symbol in some Experts' profiles. JustAnswer is not intended or designed for EMERGENCY questions which should be directed immediately by telephone or in-person to qualified professionals.