Dr. Salkin, I write with a sad story, but seek and hope for…

Dr. Salkin, I write with...
Dr. Salkin, I write with a sad story, but seek and hope for some peace. You had previously communicated with me recently about what appeared to be a musculoskeletal issue with my dog. We ended up going to the vet and she was treated with gabapentin and another med. Within three days, her yelping had stopped and she was back to her energetic self. We were thrilled.Last Friday, she spit up a bit of fluid and was lethargic, according to my wife. (I was out of town.) The next day, my dog was back to herself, pulling on the leash on a walk, and pulling on her leash when arriving at dogsitter. My dog was at the sitter for two days. I picked her up on Monday and she was not excited to see me, which was unusual. The sitter said that she was more calm than usual but that she played with other dogs and ate the whole weekend. That day, I took her to an emergent vet clinic that provide me no advice other than to offer 700 dollars worth of tests. I did not trust them and left.The next day, Tuesday, I took her to a regular vet. He said that he felt a mass the size of his fist in her abdomen. He did an X-ray and said that she had two masses. He suggested that she likely had cancer and probably had 1-3 months to live with either surgery (spleen removal) or palliative care. He said that we could learn more by going to get an ultrasound.We went to emergency vet care (not the same one as the day before) and had an ultrasound done. The docs there said that she had two masses on her spleen and another mass (unknown origin) on/near her heart. She was anemic and had a high heart rate 160. She had moderate and then significant pericardial effusion. They advised that the involvement of the heart also suggested a very grim outlook. We were initially willing to spend money in effort to save her, even if was only for a brief period, but the vets continued to suggest that things were mounting against her. One of the final straws was that her blood pressure dropped to sixty. They advised, also, that she urinated on herself and fell (though we did not see that).As best I understand, she had hemangiasarcoma, two masses on her spleen, one on/near heart, anemia, moderate to significant pericardial fluid, low blood pressure, hemoabdomen, multiple cavitated splenic masses. Peripheral Blood results were 30% PCs, 6.4 g/dL TP. Abominiocentesis drawn on 3 ml of non clotting blood revealed PCV 23% and TP 4.6 g/dL.We opted for euthansia after hearing from three vets (one a regular vet and two at the emergent veterinary clinic that did the ultrasound). We sat with her for two to three hours during which we petted her and comforted her and I researched, like mad, for any hope that I could find on the internet. Instead, I found the opposite and found that this was a truly insidious diseases and that it often presented too late despite the dog being in relatively normal form just before the need for emergent care. It was my understanding that one or more of her tumors had burst.Anyway, since the event, I have been worried that I did not do enough and I have found that some people suggest that a drug called I’m Yunity (a medicinal mushroom extract) had resulted in miracles for dogs suffering from hemangiasarcoma. That said, I do not know if it could have stopped the emergent blood loss she was experiencing. (The doctor had offered a transfusion, but thought it would provide only a few hours of release, in all likelihood.). I am very sorry for this lengthy post, but am terrified that I missed a possible solution for my sweet dog. I have put 11 years as her age, but she could have been as old as 13.
Show More
Show Less
Ask Your Own Dog Veterinary Question
Share this conversation

My condolences for your loss. Please be assured that euthanasia was a kindness for her. Hemangiosarcoma was, indeed, the most important differential and it had already metastasized making conservative (medical) care - including the use of medicinal mushroom extract - inappropriate and unreasonable for such an aggressive and advanced cancer. Please respond with additional questions or concerns if you wish.

Verified
Dr. Michael Salkin and 87 other Dog Veterinary Specialists are ready to help you
Ask your own question now
Customer reply replied 6 days ago
I just wonder if that treatment could have slowed her bleeding enough to have allowed us some time to consider other options instead of being under the gun. I read anecdotal stories of people using it and it working wonders but that is all they are - anecdotal. The doctors that diagnosed her last told me that once this had made its way to the heart that there were almost no options. They provided me some options that would have likely been in the ten thousand dollar range and suggested they thought those options were very poor anyway.

To answer you directly, it wouldn't have been standard of care and, in fact, I would have considered it malpractice to suggest that option to you.

Thank you for your kind accept. I appreciate it. Please continue with additional questions or concerns if you wish.

Customer reply replied 6 days ago
Would you mind if I sent you the records from her vet visits? I am sorry to beat a dead horse but this weighs on me greatly.

I would be pleased to review her records for you. You can scan them into your computer and give me the link to them or you could photograph them and send them as images. 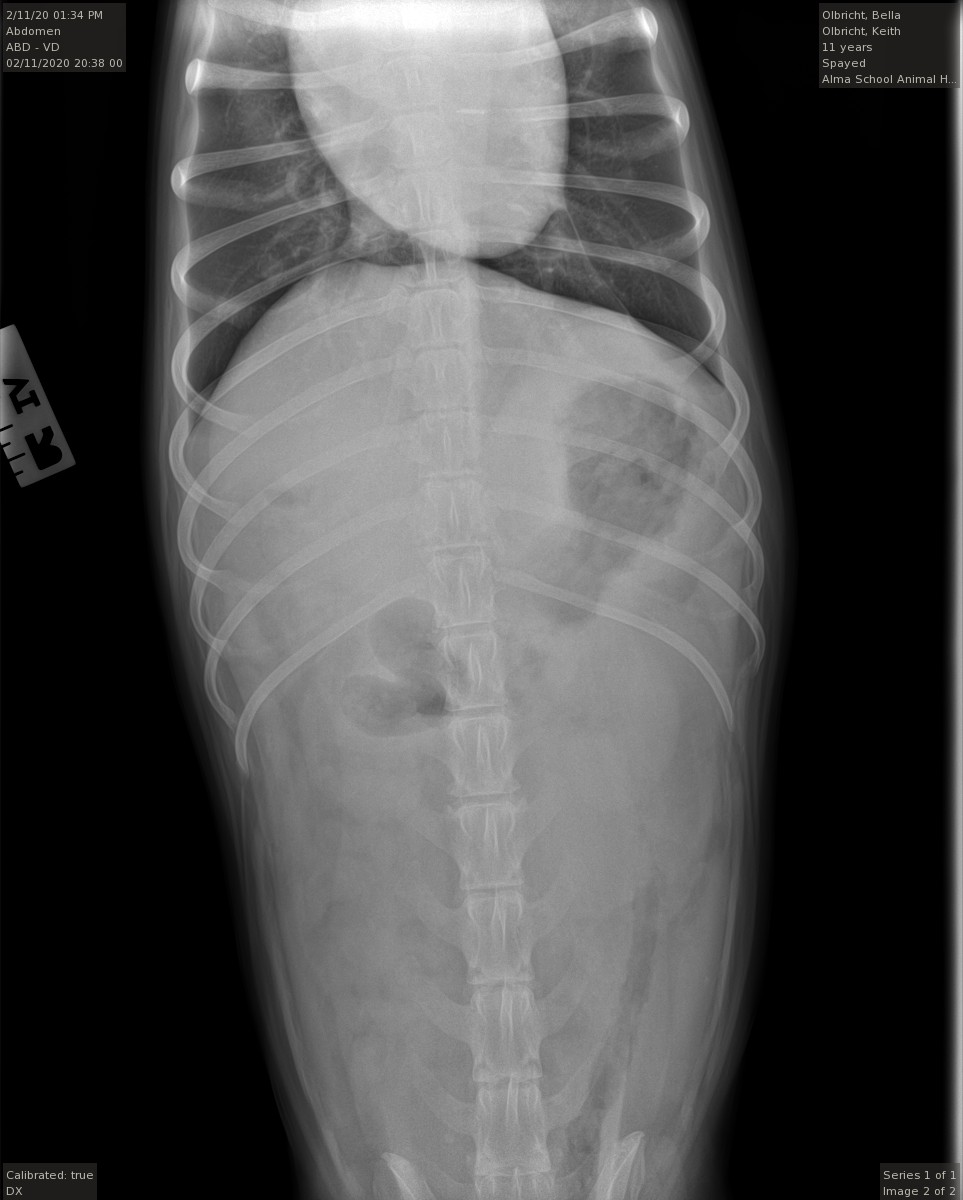 There is no significant difference (a 12% decrease) between 150 and 132 and so it can't used as an indicator of normalization. The history you provided was echoed in your original post...which was more thorough. She would have bled out or died of cardiac arrhythmia if not euthanized.

Customer reply replied 6 days ago
Yeah. I was told that I could give her a transfusion to buy some time. I am just beating myself up that I didn’t get her a transfusion and get her some of that mushroom medicine. On the other hand, from what I understand it is unlikely that she would have lived long even if I had caught it immediately after it was in her spleen only and that a very expensive surgery was likely to buy her 1-6 months.

Is there any screening available for this or is it just a death sentence when it occurs? Thanks

Life expectancy for hemangiosarcoma of the spleen rarely exceeds 6 months. Screening would involve ultrasounding dogs as part of their 6 month physicals, something that is rarely done due to cost restraints.

Customer reply replied 6 days ago
Naturally, we would have done quite a bit for her to get even six months but I don’t sense that was ever in the cards at the time she was at the vet.

How does one know it’s hemangiasarcoma without biopsy? I assume that it is just a classic or typical presentation. Thanks

That can't be done but by the principle of Occam's Razor a heart lesion concurrent with a splenic lesion represents hemangiosarcoma unless proven otherwise.

Customer reply replied 6 days ago
Got it. Sorry to be a pain. Wanting to confirm that our actions were appropriate. Thanks

Not only appropriate but kind. You're quite welcome.

Chat 1:1 with a dog veterinarianLicensed Experts are available 24/7

Dr. Christian K.
Veterinarian
Doctoral Degree
9,018 satisfied customers
Show more
Disclaimer: Information in questions answers, and Show More
Disclaimer: Information in questions, answers, and other posts on this site ("Posts") comes from individual users, not JustAnswer; JustAnswer is not responsible for Posts. Posts are for general information, are not intended to substitute for informed professional advice (medical, legal, veterinary, financial, etc.), or to establish a professional-client relationship. The site and services are provided "as is" with no warranty or representations by JustAnswer regarding the qualifications of Experts. To see what credentials have been verified by a third-party service, please click on the "Verified" symbol in some Experts' profiles. JustAnswer is not intended or designed for EMERGENCY questions which should be directed immediately by telephone or in-person to qualified professionals.