I have a evap leak on my 08 dodge ram 1500 V8 flex. Did a smoke test, and found that the only place that it's leaking is out of what looks like a vent. However I cannot find anything about it online. It is directly behind the engine, and connected to the evap system.

Mechanic's Assistant: How old are the hoses? And what driving conditions do you most often encounter?

I also have pictures. The hoses are org with the truck as best to my knowledge. Its typically used for my wife driving to and from work, maybe 20 mines one way, with the occasional 60+ mile drive highway.

Mechanic's Assistant: What year is your Ram 1500?

Mechanic's Assistant: Are you fixing your Ram 1500 yourself? What have you tried so far?

Yes, manually checked all hoses and connectors. Replaced purge valve, and did a smoke test of the system

Mechanic's Assistant: Anything else you want the mechanic to know before I connect you?

I think thats it. I have pictures of what I found with the smoke test if I am able to send them

Hi, my name is Ed; welcome to JustAnswer!.

Evap system leak diagnosis can be a bit of a pain and since you've included a smoke test in your question description, I'm immediately encouraged that we can fix this thing.

At risk of telling you stuff that you already know, the evap system is governed by the vacuum switch unit that's called the ESIM (evaporative system integrity monitor), mounted on the vapor canister. It vents to the black canister that almost certainly has yakked smoke during your test.

The Gas Law that says pressure in a sealed system will decrease with a drop in temperature is what the ESIM is based upon. There's a certain vapor volume in the fuel tank that will be monitored by the ESIM as the truck sits (turned off) and there's an expectation that when overnight temps drop that the system will develop a small vacuum if there are no leaks. The ESIM detector is just a simple vacuum switch that lightly seals the evap system and allows this small vacuum to build. In the meantime it will close a switch that tells the PCM that your evap system is mostly-sealed and you go on your merry way. The lack of that signal - whether through ESIM failure, actual leakage or electrical system issues - will set the same code.

Pushing smoke into the evap system will overwhelm the ESIM and its rather weak sealing capabilities, ending with smoke pouring out of the vent filter at the end of a 1/2" vent tube from the vapor canister. Actual placement of the canister varies wildly in this model year depending on market, but if you've already identified the point where smoke comes out... just follow the tubing back to the ESIM. It's the white thing-y at the vapor canister that has a 2-wire connector.

There's a certain beauty to the ESIM if you understand it. It uses but two wires to operate a vacuum switch that shorts the pullup voltage of one wire to the ground of the other. Tested with a voltmeter, you'll have some voltage on one wire, with the other being a ground. I don't recall actual voltage - it doesn't come up often - but assume it to be 5v or more, with the ground being quite good at 10 ohms or less. Broken wires sometimes happen and this exactly appears to the Evap Leak Monitor to be a violation. Check to see that you have voltage and ground (key on). Wiring sometimes breaks in the gap spans between the ESIM and the frame.

If wiring checks OK and you have no indication that there are leaks elsewhere, chances are good that the actual evap system COP - the ESIM - is to blame. It happens very often. Scan tool data if available might tell you whether there is an ESIM switch state change during events like purge flow, or you could measure across the two terminals during purge flow (when vacuum is applied to the evap system) to tell if switch state actually changes. Extremely small leaks that smoke testing sometimes fails to find won't be affected by purge flow volume and you should see the ESIM change from voltage to no voltage.

ESIMs also have the added responsibility of lightly sealing the evap system under both pressure and vacuum, but typically the pressure of a smoke tester overwhelms this baseline. Still, the chance of an ESIM failing to seal the evap system exists and happens, so if your testing for voltage/ ground and external leaks turn up negative, chances are good that the ESIM is your boy.

Customer reply replied 3 years ago
I have changed the ESIM module itself, that is mounted on the canister with no change. Attached is the only spot I found that was outputting smoke, rather than the gas intake. 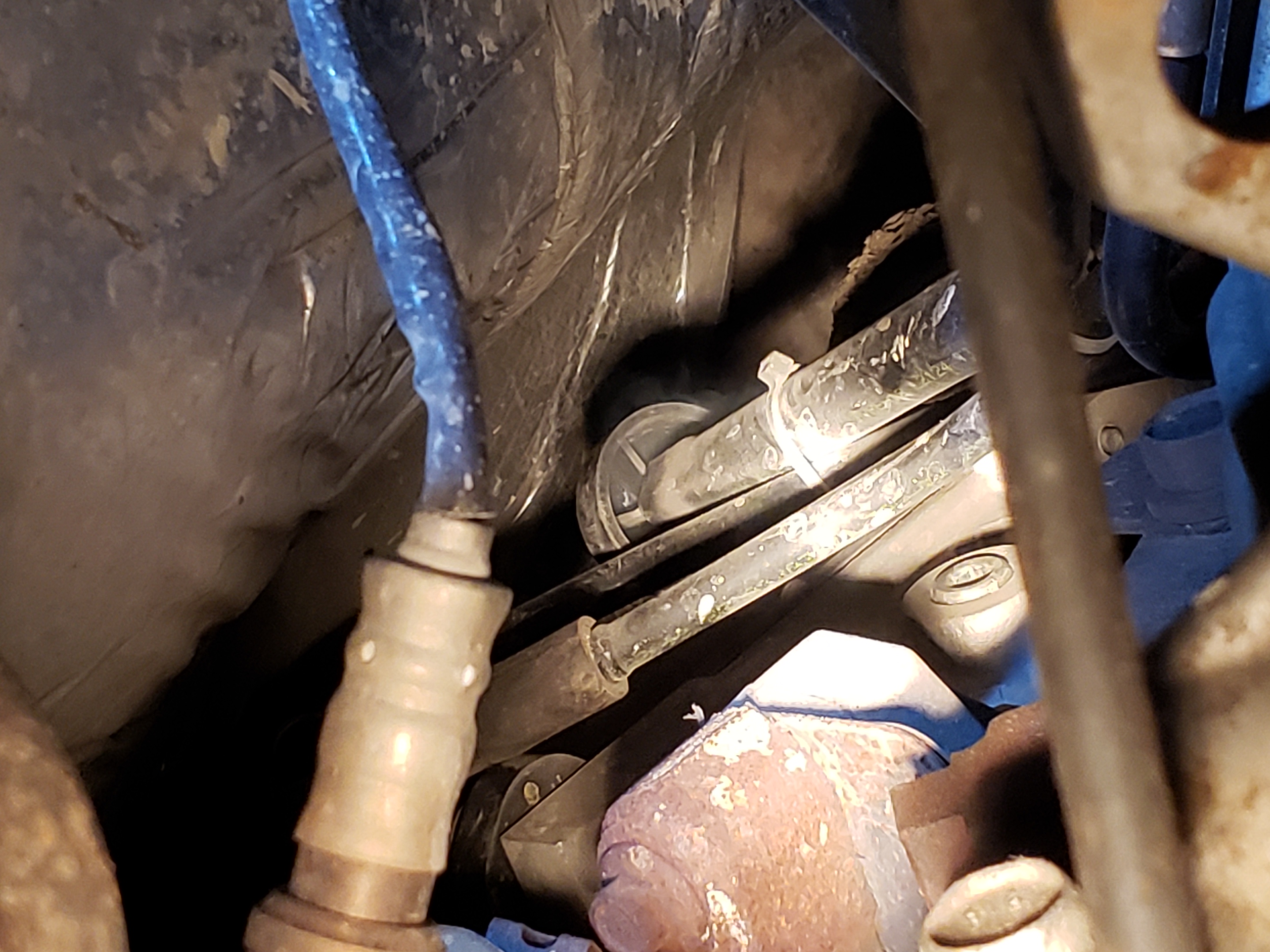 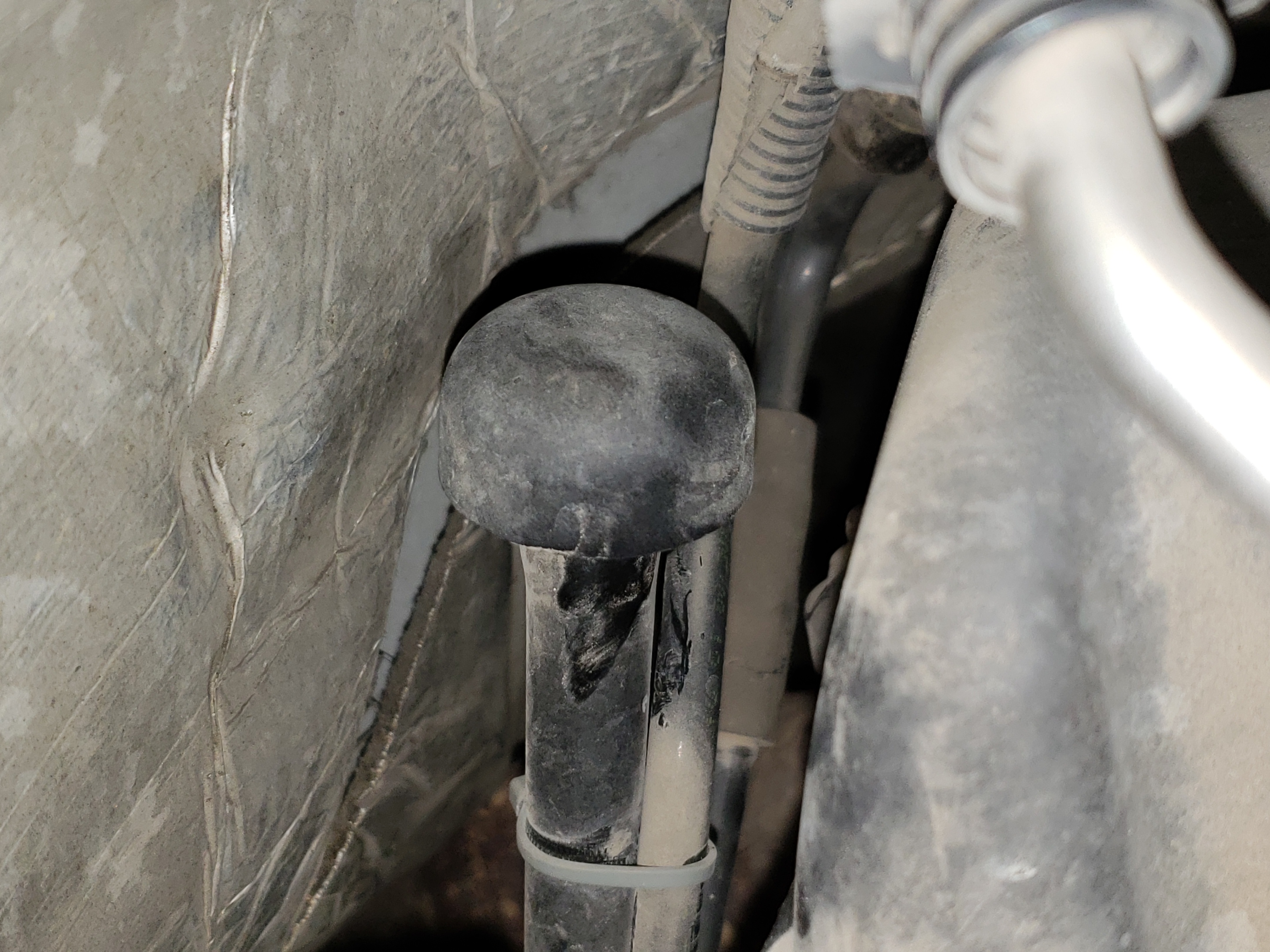 Yep, that's the ESIM vent - the point where anything that's pushed past the canister goes to atmosphere. If the ESIM is new, I'd have a few pieces of advice.

First, break out the multimeter and see what you find on each of the two wires at the ESIM. It's a simple system - a pullup voltage is monitored by the PCM and if not shorted to ground by the ESIM, it assumes there is a leak. Any break in the wiring to the ESIM will make this appear true.

And second, pay close attention to the gasket that sits between the canister and ESIM. I see many, many leak issues that happen because the stupid gasket gets squished and twists when turning the ESIM into position. For that reason, I always use a glob of petroleum jelly on both sides of the gasket when installing the ESIM. On the ESIM side, it lets the sealing surfaces work without binding... and on the back side (canister side) the lube sticks the gasket to the canister, keeping it in place. It works.

Check those two wires with the ESIM disconnected (key on) and let me know what you find.

Verified
Dodgerench and 87 other Dodge Specialists are ready to help you
Ask your own question now
Customer reply replied 3 years ago
Ilk try that, thank you

Thanks, bud. These things are a bit tricky if you haven't lived in them up to your neck for a few years, but even without scan tool info I figure we can sort it out.

I didn't think to ask. What codes are you seeing?

Chat 1:1 with a dodge mechanicLicensed Experts are available 24/7

dodge bum
Master Mopar Technition
Vocational, Technical or Trade Scho
298 satisfied customers
Show more
Disclaimer: Information in questions answers, and Show Less
Disclaimer: Information in questions, answers, and other posts on this site ("Posts") comes from individual users, not JustAnswer; JustAnswer is not responsible for Posts. Posts are for general information, are not intended to substitute for informed professional advice (medical, legal, veterinary, financial, etc.), or to establish a professional-client relationship. The site and services are provided "as is" with no warranty or representations by JustAnswer regarding the qualifications of Experts. To see what credentials have been verified by a third-party service, please click on the "Verified" symbol in some Experts' profiles. JustAnswer is not intended or designed for EMERGENCY questions which should be directed immediately by telephone or in-person to qualified professionals.

I AM VERY GLAD THAT I TOOK A CHANCE ON YOUR PROBLEM SOLVING SKILLS. I WAS SUCCESSFUL IN REPLACING THE FUEL PUMP. MY TRUCK RUNS LIKE A CLOCK. IT RUNS LIKE THE DAY I BOUGHT IT. NO LUNGING FORWARD, THE TURBO REACTS THE SECOND I STOMP ON THE GAS, AND IT HAS A LOT MORE POWER AND EVEN SOUNDS BETTER TO ME. IT SAVED ABOUT $500.00 BY DOING THE WORK MYSELF. I GIVE YOU ALL THE CREDIT FOR YOUR DIAGNOSING THE PROBLEM, JUST FROM THE SYMPTONS I GAVE YOU OVER THE e MAIL. I WILL USE YOUR WEB SITE AGAIN AND REFER MY FRIENDS. THANKS SO MUCH FOR THE HELP.

Just a quick line to tell you how pleased I am to have my brakes working properly after all this time. Your answer was what I needed. I would certainly recommend you highly. God bless!

I recently asked a question about my 2005 dodge ram, and I just wanted to let my Expert know that he hit the nail squarely on the head with his answer. I wanted to thank him again.

Just a quick line to tell you how pleased I am to have my brakes working properly after all this time. Your answer was what I needed. I would certainly recommend you highly. God bless!

I was skeptical at first but thought I'd give it a try. I was pleasantly surprised. Your site actually is a quality service that I would recommend to others in a heartbeat.