Do you have a ct d5n transmission expert? Cat. Complete

Do you have a ct d5n transmission expert?

Mechanic's Assistant: What is the complete model and serial number of your machine?

Mechanic's Assistant: Are you fixing this yourself? What have you tried so far?

Mechanic's Assistant: Anything else you want the construction mechanic to know before I connect you?

Show More
Show Less
Ask Your Own Construction and Road Equipment Question
Share this conversation
Customer reply replied 4 years ago
we completely rebuilt the transmission, it came in for no first gear. We did a complete rebuild, and new ecm. all pressures are to specs. when you shift to second gear when the tracks are in the air, the tracks stop for second and a loud bang then they start moving. It does this between every gear....all 3

Answered in 21 minutes by:
Mechanic: Dan, Technician replied 4 years ago

Verified
Hi my name is***** will be glad to help. I was Prior field service for my local caterpillar dealer before going independent. What is your serial number of your machine? The prefix is all I need which should be some numbers and letters. In other words the first three digits.Do you have caterpillar ET as well?did you run through all the calibrations for the clutch fill calibrations Etc using caterpillar ET after this installation?

Mechanic: Dan, Technician replied 4 years ago
If you have not run through all the calibrations after the rebuild and install and you are sure that the ECM is flashed with the most current updates then you need to run the calibrations through caterpillar ET on this transmission 4 it to shift properly and smoothly.... I would run through that first and try that first. respond back with your results. Please remember to take a moment to rate my answers as that is how the site credits my time helping on the site. Five-star ratings and bonuses are always greatly appreciated.
Customer reply replied 4 years ago
we did calibrate with ET and now trying again with the box, and the ecm was flashed by cat this morning

Mechanic: Dan, Technician replied 4 years ago
This occurred immediately after rebuild.... And all pressures are in specs with none dropping off when shifting between gears? Lube pressure is okay? Did you run through all the pressures or just the main transmission pressure? I did you see how the pressures respond to shifting between different gears?
Customer reply replied 4 years ago
He says the pressure moves just like it's suppose to when shifting, but then he says it drops when it bangs they back to normal, he thinks it's going in 2 gears at the same time for a second then goes on with the shift, does this even in reverse. Don't know if it did this before or not. Tjhe operator said he thought it did but only slightly

If not check that and let me know and also check the filter and screen internally to see if it is starting to produce any metal that would confirm it needs to be torn down again for bench inspection.

Ive gotta run out for a while but we can follow up as needed on here.

Customer reply replied 4 years ago
we have removed it already and reassembled and everything was assembled correctly, the tech is a 20 year cat guy, I think he's missing something simple????

Mechanic: Dan, Technician replied 4 years ago
it does move and there's no indication of it slipping it is just having a delayed shift between gears and banging? Otherwise it pushes good in each gear and everything else operational is good? The temperatures are also good? How many hours are on this transmission now?it is not producing any metal if you were to cut open the filters and squeeze the excess out of your sample in a vice?
Customer reply replied 4 years ago
we have not pushed with it, after the rebuild it has not left the shop

Mechanic: Dan, Technician replied 4 years ago
GotchaUsually it is the clutch fill calibrations and possibly a speed sensor related issue or solenoid. Normally you would get a fault code though indicating this. It is odd that there are no fault codes which starts to make you think that it is mechanical. Between what years are banging or is this between all gear changes that it is banging?

Mechanic: Dan, Technician replied 4 years ago
I have to run out for a little while however please when you get a moment post the serial number prefix and we can follow up as needed on here.

Verified
Dan and 87 other Construction and Road Equipment Specialists are ready to help you
Ask your own question now
Customer reply replied 4 years ago
all gear changes, up or downAGG02851 D5N XLBMA37168/188-2033 AR ESN
Customer reply replied 4 years ago
any more ideas come to you overnight?I drove the machine last night and when shifting between gears, its pretty violent it will rattle your teeth

The transmission clutches are hydraulically engaged and released by spring tension. There is one modulating valve for each clutch. Solenoid (18) is energized in order to engage the corresponding clutch.

The amount of current that is supplied to the solenoid is determined by the response of the machine, which includes the following indicators:

As current is applied to the solenoid, pin (19) extends to the right. The pin moves ball (14) closer to orifice(15). The ball begins to restrict the amount of oil to drain (A). This increases the pressure on the left end of valve spool (16). As the pressure at the left end of the spool increases, the spool shifts to the right. This blocks the drain passage. Oil is now directed to clutch (20). When the clutch fills, pressure begins to increase and the clutch engages.

If the modulating valves are not operating correctly, the valves are designed to be individually replaced.

The modulating valves for the transmission need to be recalibrated if any of the following services are performed: 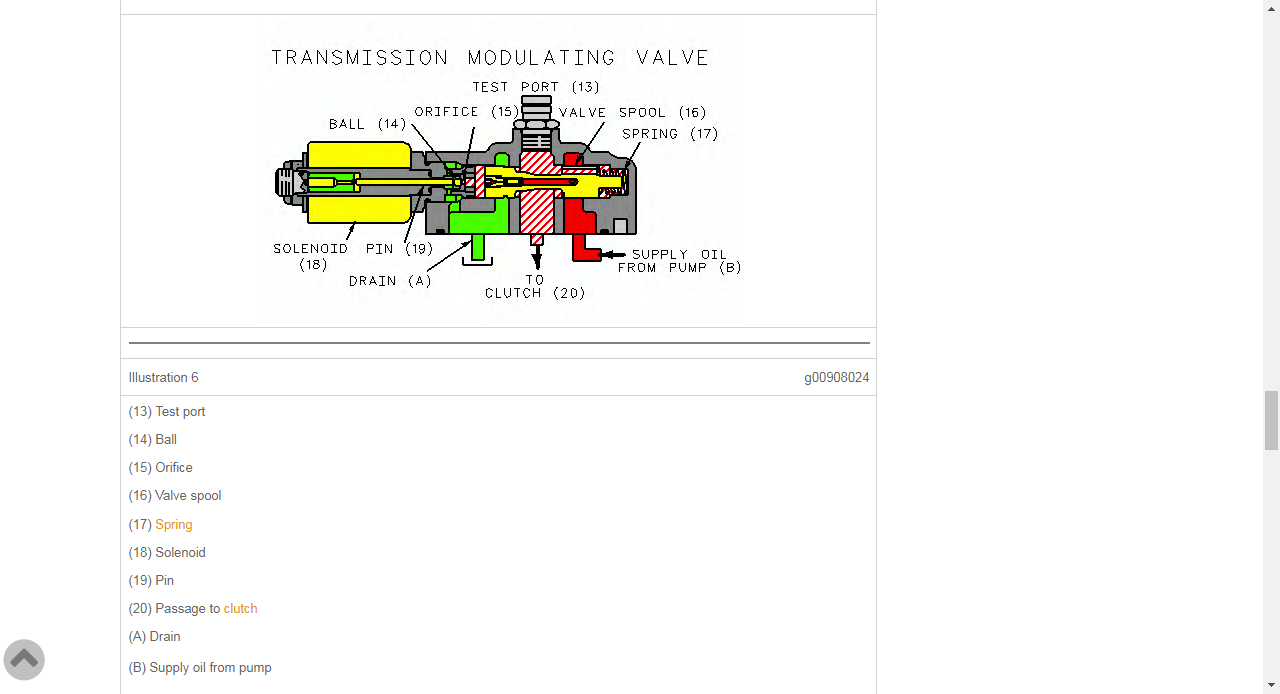 Mechanic: Dan, Technician replied 4 years ago
If you have caterpillar ET available to monitor in live data then an incorrect speed sensor signal from a faulty sensor or wiring harness issue between the sensor in the ECM could cause a false input of speed signal causing harsh shifting. An ECM calibration issue or modulating valve calibration that is not correct could also cause this. A problem with the modulation valves could as well cause a problem but it is unlikely that all of them have a problem unless of course they are out of calibration. The ECM if not calibrated properly could be sending a wrong voltage signal to the solenoids causing harsh shift. Each of these scenarios would have to be investigated individually to isolate this. I would also monitor your pressure right at the modulation valves to see what is happening with those pressures.
Customer reply replied 4 years ago
thank you, ***** ***** a cat tech here now trying to help, I'll let you know if he finds anything

Mechanic: Dan, Technician replied 4 years ago
Thanks for the update. Keep me posted
Was this answer helpful?
Yes
No

Dan
Technician
Auto Mechanics 1&2/diesel mech
15,102 satisfied customers
Show more
Disclaimer: Information in questions answers, and Show Less
Disclaimer: Information in questions, answers, and other posts on this site ("Posts") comes from individual users, not JustAnswer; JustAnswer is not responsible for Posts. Posts are for general information, are not intended to substitute for informed professional advice (medical, legal, veterinary, financial, etc.), or to establish a professional-client relationship. The site and services are provided "as is" with no warranty or representations by JustAnswer regarding the qualifications of Experts. To see what credentials have been verified by a third-party service, please click on the "Verified" symbol in some Experts' profiles. JustAnswer is not intended or designed for EMERGENCY questions which should be directed immediately by telephone or in-person to qualified professionals.