I have a 312 cat excavtor that doesnt want to turn, model…

Mechanic's Assistant: What is the complete model and serial number of your machine?

Mechanic's Assistant: Are you fixing this yourself? What have you tried so far?

Mechanic's Assistant: Anything else you want the equipment mechanic to know before I connect you?

I am not real experienced with hydraulics

Answered in 1 hour by:
Mechanic: Dan, Technician replied 5 years ago

Hi my name is***** will be glad to help. Are all other functions operating normally except for travel?

If so and both travel motors seem slow and sluggish it is unlikely for both to fail at once. 9 times out of ten the cause is the seals in your rotary manifold at the base of your boom and center of the swing circle. Reseal the rotary manifold. this is actually a common wear item on excavators and part of the troubleshooting process as testing is more involved than just resealing the manifold. Let me know

No The seals bypass internally between the ports and you loose pressure and flow to the travel motors and the pressure jumps to the other ports causing it to fight against the other port thus creating travel issues.

Customer reply replied 5 years ago
I see thanks

I was field service for Cat. This is an 8 hour job billed. I did them in 4

Leave the lower section in the machine and lower lines connected... Unbolt enough to angle it if you have to to clear the boom base.... Tag the top lines and sling the top section with a lift strap and lift it off with a lifting crane.

No, it is a small rotary manifold behind the base of the boom

Not much bigger than a coffee can upside down

At operating temperature, the hydraulic oil tank is hot and under pressure. Hot oil can cause burns. To prevent possible personal injury, release the pressure in the implement hydraulic circuits (the boom, the stick and the bucket) before any of the hydraulic lines or any of the components are disconnected or removed.

1. Release the pressure in the hydraulic system as follows:

a. Fully retract the rod in the stick cylinder.

b. Adjust the position of the bucket so it will be flat on the ground when the boom is lowered.

c. Lower the boom until the bucket is flat on the ground.

d. Shut off the engine, and put the hydraulic activation control lever in the "Lock" position.

e. Move the control levers for the boom, bucket, stick and swing through their full travel strokes. This will relieve any pressure that may be present in the pilot system.

f. Slowly loosen the air breather cap on the hydraulic oil tank to release the pressure.

h. The pressure in the hydraulic system has now been released. Lines and components can now be removed.

3. Disconnect four hose assemblies (1) from the top of the swivel joint.

View From Under Machine

6. Remove fittings (6) from both sides of the swivel joint to provide clearance through the mounting hole. Remove four bolts (7).

NOTE: The following steps are for the installation of the swivel joint.

9. Be sure the threaded holes in the undercarriage frame assembly for mounting the swivel joint are clean and free of dirt and debris.

10. Apply 1U8846 Gasket Maker to the surface of the undercarriage frame assembly on which the swivel joint is installed.

11. Fasten lifting straps and a hoist to the swivel joint, and put it in its original position in the undercarriage frame assembly. Be sure the identification mark on the bottom face of the swivel joint is facing toward the front of the machine.

14. Remove the hoist and lifting straps from the top of the swivel joint.

17. Fill the hydraulic oil tank with oil to the correct level. See the Operation & Maintenance Manual for the correct filling procedure.

1. Thoroughly clean the outside of the swivel joint prior to the disassembly.

NOTE: The following steps are for the assembly of the swivel joint.

5. Be sure all of the parts of the swivel joint are clean and free of dirt and debris.

7. Install outside housing (8) over rotor (9). Install retainer (7) and two bolts (5) and the washers that hold the retainer. 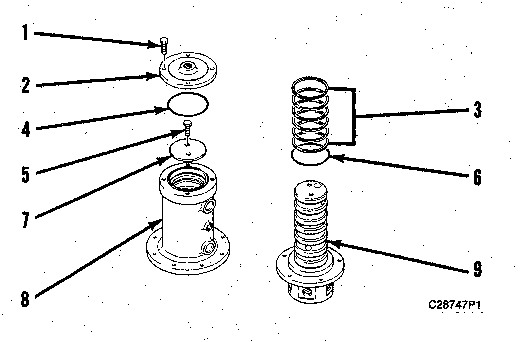 The instructions tell you to remover the lines under the track frame in the middle of the machine. I leave the lower part right in the machine and pull the two sections apart.... Saves a lot of time.

If there are deep grooves where the seals ride you may not be able to get by with resealing it.

That pretty much covers it... That is the step we would take before the travel motors. On those you check for excessive case drain. But usually it would be isolated to one track. unlikely two would fail at once

If successful you should be able to counter rotate in low speed. High speed varies unless you are in soft material...

Customer reply replied 5 years ago
Can I ask What is case drain ?

It is low volume and low pressure return oil. Everything left over after the drive utilizes its high pressure oil supply. Helps to lube and cool the drive as well. When high pressure bypasses to case drain is when the component is worn and failing or has failed.

Pleasure to help. Each of the drive motors has a case drain port for return oil as does the swing motor as well.

Customer reply replied 5 years ago
I want to thank you again for your help. It took me about 6 -6 1/ 2 hrs. I got lucky didn't brake anything took a hydraulic bath though. Cost about $68.31at Milton Cat in Brewer Maine

Thanks for the update. Its a pleasure to help. Same dealer I worked for. Was field service out of Miford MA. Did your travel problems resolve? Please remember to take a moment to rate 5 stars as that is how the site credits my time helping on the site.

Pleasure working with you on this and thanks for the update.

Wayne
Journeyman
Vocational, Technical or Trade Scho
1,298 satisfied customers
I have a cat 303. I have a Cat 303. My Cat 303.5 excavator
my Cat 303.5 excavator stick drifts down. Replaced seals in stick cylinder and it still drifts. The cylinder has no oil bypassing piston seals. Seems like the oil is going back through the valve. … read more

catmastertech
Field service technician
Vocational, Technical or Trade Scho
1,325 satisfied customers
Show more
Disclaimer: Information in questions answers, and Show Less
Disclaimer: Information in questions, answers, and other posts on this site ("Posts") comes from individual users, not JustAnswer; JustAnswer is not responsible for Posts. Posts are for general information, are not intended to substitute for informed professional advice (medical, legal, veterinary, financial, etc.), or to establish a professional-client relationship. The site and services are provided "as is" with no warranty or representations by JustAnswer regarding the qualifications of Experts. To see what credentials have been verified by a third-party service, please click on the "Verified" symbol in some Experts' profiles. JustAnswer is not intended or designed for EMERGENCY questions which should be directed immediately by telephone or in-person to qualified professionals.