My T250 has a problem with the lift/tilt. the indicator light…

Verified
Hello, allow me to make sure of what you're saying, when you push the green enable button, all BICS lights come on except lift/tilt lock? Does the machine make any beeps when this happens?
Customer reply replied 8 years ago

No beeps. Everything else works. I used it to blow snow, parked it and all seemed OK then the next time I turned it on the light would not go on and I hand no lift and tilt.

Mechanic: Fieldtech59, Shop manager replied 8 years ago
Ok, thanks. Since the lift/tilt LED isn't lit, the LED is not flashing, and there's no beeps indicating a fault, it sounds like the ECU isn't sending a signal to the BICS solenoid. It could be a faulty BICS control module on the left control panel, but I kinda doubt it if the other LED's light up. Not likely that it's a problem with the seat bar switch because the parking brake lock would apply if the seat bar switch were faulty, you wouldn't be able to drive it.

Additionally, if the lift/tilt LED doesn't light up, then you shouldn't be able to move the pedals either, that is if it's a standard control machine. I failed to ask you if the machine has Advance Hand Controls or Selectable Joysticks. If you can't move the pedals, then I suspect a problem with either the ECU, or a problem with the harness between ECU and the BICS solenoid and spool lock solenoids at the main control valve.

Could you provide the machine serial number, that way I can make sure I'm looking at the correct diagrams. BTW, it should be a nine digit number, don't post it as number or the website will think it's a phone number and X it out on my end, instead post the serial number with words, i.e., five five seven...
Customer reply replied 8 years ago

The serial number is XXXXX two five six one one four four five.

It also has the Advance Hand Controls and Selectable Joysticks

I hope that helps

Also, could you tell me where the BICS and the spool lock solenoids are located?

Ok, selectable joysticks (SJC), that changes things slightly, you don't have foot pedals with them so there's no spool locks, instead the actuators are locked out by the ECU. It still has the BICS lockout solenoid though like other models. I haven't seen this problem before and I'm a bit perplexed by it.

The thing is, the moment you power up the ignition the ECU makes a quick "flash" of systems and components, any system or component that has a fault will be noticed by the ECU and it will make the alarm beep indicating fault code. And being SJC option, that's even more components that the ECU monitors.

I'm just thinking, though I can't confirm as I've not seen this, that if BICS panel, cab wiring, or joysticks were the problem then the ECU would pick up on that. Additionally, if the wiring harness that goes to the BICS solenoid coil were to short out to ground, it would throw a fault. Same wiring harness disconnect (wire broken, connector unsnapped) it should still throw a fault. BICS solenoid shorted out internally, again, fault. But a broken ground wire from the solenoid to frame, I'm not sure, ECU might not pick up on that. Heck, it could be simply the nut that holds the BICS solenoid coil in place has come loose and the coil fell off, still hooked to the harness, but doing nothing.

I'm going to post a pic that shows the BICS solenoid on the main control valve, but this crazy website, I first have to post this reply, and close out the reply. Then open it back up and edit the post to insert the pic. Yeah...crazy!

The BICS lockout solenoid is the black solenoid coil roughly in the center of the main control valve (see red arrow). 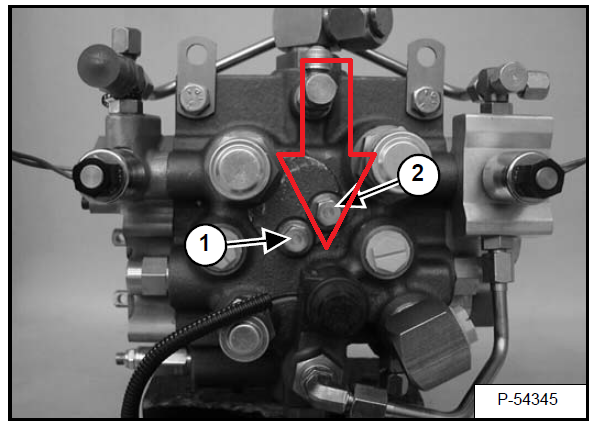 Verified
Fieldtech59 and 87 other Construction and Road Equipment Specialists are ready to help you
Ask your own question now
Was this answer helpful?
Yes
No

catmastertech
Field service technician
Vocational, Technical or Trade Scho
1,328 satisfied customers
Show more
Disclaimer: Information in questions answers, and Show Less
Disclaimer: Information in questions, answers, and other posts on this site ("Posts") comes from individual users, not JustAnswer; JustAnswer is not responsible for Posts. Posts are for general information, are not intended to substitute for informed professional advice (medical, legal, veterinary, financial, etc.), or to establish a professional-client relationship. The site and services are provided "as is" with no warranty or representations by JustAnswer regarding the qualifications of Experts. To see what credentials have been verified by a third-party service, please click on the "Verified" symbol in some Experts' profiles. JustAnswer is not intended or designed for EMERGENCY questions which should be directed immediately by telephone or in-person to qualified professionals.