Have a westerbeke 4-91 need to replace rear main seal.

Customer Question
Have a westerbeke 4-91...

Have a westerbeke 4-91 need to replace rear main seal

Mechanic's Assistant: Sometimes things that you think will be really complicated end up being easy to fix. The Marine Mechanic I'm going to connect you with knows all the tricks and shortcuts. Tell me a bit more about what's going on so the Marine Mechanic can help you best.

Hadn’t run motor in1-2 years, when it started had oil coming out of bell housing

Mechanic's Assistant: Is there anything else the Marine Mechanic should be aware of?

Hello- There are two reasons an engine might start leaking out the rear seal. The first is the seal may have dried out and needs replacing. that is pretty easy. Split the engine from the bell housing, remove the flywheel, dig out the old seal and press in a new one. You don't have to pull the crank or anything normally.

Unfortianatilly that only works about ten percent of the time. The majority of the time the rear seal leaking is caused by excessive blow by in the engine that pressurizes the crank case and the oil itself starts blowing out the rear seal. That won't be fixed by changing the rear seal. It will be better for a short period of time, but the new seal will just start leaking as the old one did.

What can be done you ask. If the engine has not been run for a long time you can run the engine at max load for a while, like an hour or two and sometimes that makes the rings seat again and that saves the engine. The 4-91 only had three rings so this is a bit of a long shot, but it is easy to do.

You can also make sure the vent from the crank case to the air intake is totally free and not clogged as that will also cause the rear seal to leak.

Here is your engine parts manual-

I just went through the whole thing page by page trying to find the breather and they don't have it listed. Very weird. Anyway there will be a tube from the crank case to the atmosphere or the air intake somewhere. That tube has to be clear.

One last test you can do is get the engine running at power and pull the dip stick. If it sprays oill out then you have blowby. If you can feel a steady pressure coming out of the oil dipstick hole then you have blowby. The official pressure that is supposed to be in the crankcase is .5psi. I don't know how you would measure that but a little is too much.

Finally the back of the crank has a reverse spiral cut into it to channel the oil away from the rear seal. thus there are two methods for preventing oil from coming out the rear seal so one has already been overcome with oil. That is normally a poor sign.

Customer reply replied 17 days ago
Question is once I removed fly wheel and out put shaft has plate with 6 5/16” studs.what is best way to remove this plate?

If you go to page 44 of the parts list I linked above you should see part #16. You take out bolt #5, all of them and the generator should pull away from the engine.

That should give you access to bolt #14 where you pull the 5 of them and the flywheel should come off giving access to the rear seal. 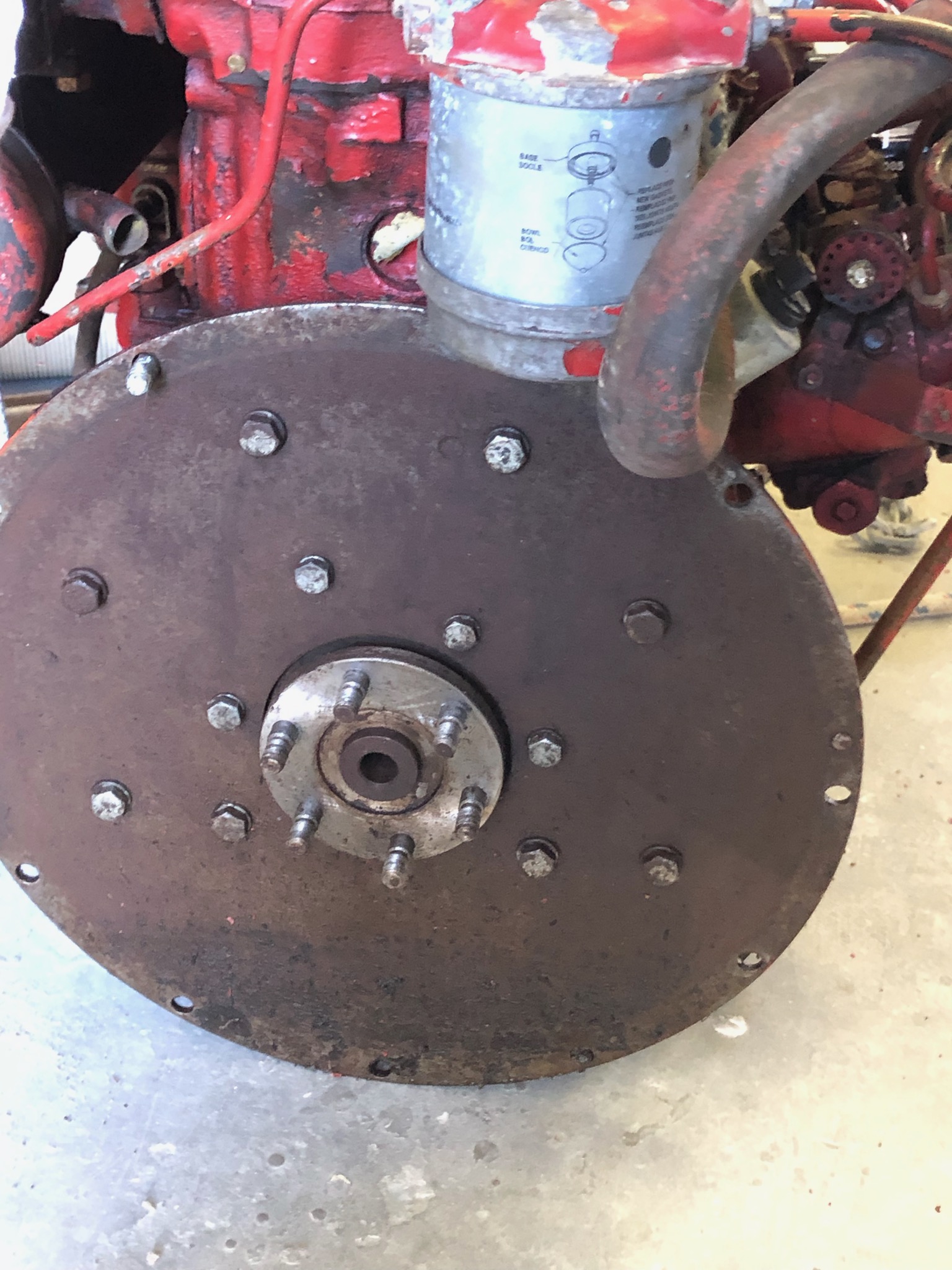 well sorry to say, that looks a lot like a split rear seal. Funny thing was the engine diagram showed almost everything but the rear seal and I looked for it.

So, in this case without a drawing but pretty sure now that I have seen the photo what you need to do is remove that big round aft plate, then remove the oil pan then you can pull out a two part seal that is around the crankshaft. With luck you won't have to slacken all the other journals to get the old seal out and the new seal in. But if you can't get the new seal in and out then that is the next step. Smaller engines sometimes have to do a split rear seal because otherwise the landing for the flywheel would not be wide enough, so because the end of the crank is wide a seal wont fit over it thus the need for a split rear seal.

Customer reply replied 17 days ago
Afraid of that, oh well. Least my suspicions have been answered

Great. Let me know how it turns out.

Customer reply replied 13 days ago
Well, ended up calling Hansen marine in Marblehead Ma, westerbeke dealer. Turns out service manager worked at westerbeke from the 70's and very familiar my mymotor a 4-91. So turns out no main rear. He suggested lead breather hose-into air filter to help pull pressure out of crank. But afraid it is a ring problem andblow by problem. Been pouring Marvel mystery oil in cylinders, so maybe....

Ah, that must be why we could not find the main rear seal on the drawing.

Here is a trick we used to use. If you have a lot of blow-by and want a few more seasons from the engine and are going to put a hose from the crankcase to the air intake you can put the hose into a small cooking pot filled with those stainless scrubbers. Then the air and oil mix can pass through the scrubbies and when it comes out the top it is mostly air going into the air intake. This prevents blowing mostly raw engine oil into the air intake that eventually clogged the intake valves etc.

I will leave it with my last text here or the computer will keep posting the question back to me.

Customer reply replied 13 days ago
with injectors out, motor turns over pretty easy, although it tends to shudder. Wondering if rings /cylinder are scarred?

Cab you take a video of the turning over for about four seconds and post it here. I can tell a lot more if I can see it a bit.

Customer reply replied 13 days ago
Heading back to shop tonight to paint, take it then

Thanks. No hurry. I am here all the time.

I will leave this with my last text so the system doe not keep putting the question back up for me to read.

Chat 1:1 with a marine mechanicLicensed Experts are available 24/7

Jason
Marine Mechanic
Vocational, Technical or Trade School
21,048 satisfied customers
1984 Maxim 2400 SCR: Motor not turning a full 360 degree. Why?
I have a 4.3L Alpha 1 gen 2 in my boat. Last year I took the motor out and replaced it with a long block, swapping over my old components onto the new engine. This year I'm finishing and have the moto… read more

Jason
Marine Mechanic
Vocational, Technical or Trade School
21,048 satisfied customers
hi tan,I have a bravo3 SN#0W971391problem gear lube leak
hi tan, I have a bravo3 SN#0W971391 problem gear lube leak between bell housing and upper shaft drive housing starboard side. I have several quistions. 1: is the u joint inside the u joint bellow lubr… read more

Yachtwork
Marine Engineer
Technical or Trade School
1,400 satisfied customers
Show more
Disclaimer: Information in questions answers, and Show More
Disclaimer: Information in questions, answers, and other posts on this site ("Posts") comes from individual users, not JustAnswer; JustAnswer is not responsible for Posts. Posts are for general information, are not intended to substitute for informed professional advice (medical, legal, veterinary, financial, etc.), or to establish a professional-client relationship. The site and services are provided "as is" with no warranty or representations by JustAnswer regarding the qualifications of Experts. To see what credentials have been verified by a third-party service, please click on the "Verified" symbol in some Experts' profiles. JustAnswer is not intended or designed for EMERGENCY questions which should be directed immediately by telephone or in-person to qualified professionals.