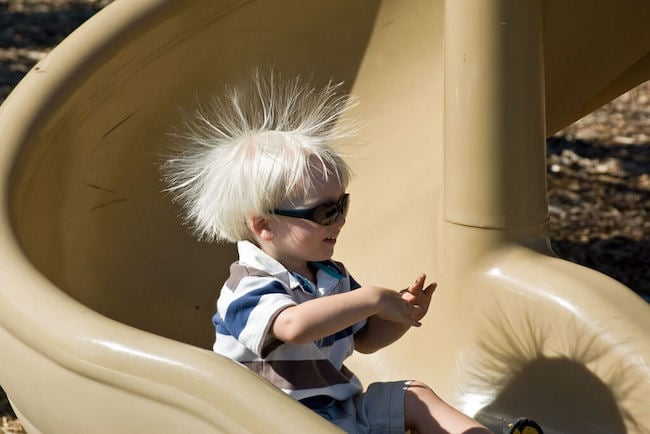 Understanding what causes static electricity can help you avoid static shocks – and worse – in the future.

Most of us have experienced it at some point or another – you’re walking across a carpeted room, preparing to open the door in front of you when you feel a jolt. The moment your hand reaches the metal doorknob, there’s a painful zap! Even those among us who are all too familiar with this kind of thing might not know where it comes from. So what causes static electricity? And what exactly is it?

Simply put, static electricity is created when electrical charges are allowed to build up on non-conductive surfaces. Unlike the electricity you use to power your home, static electricity doesn’t have much of a current. The “shock” it incites can occur when two different materials come into contact with each other, allowing the electricity to move from one to the other. The charges on the two surfaces should equalize, but if they’re too large, there could be an electrostatic charge – this is when you might see a spark!

Looking at the dangers of static electricity

Aside from the jolt you might feel when you touch a doorknob, examples of static electricity also include moments when your hair is standing on end, or the crackling of electricity when you’re pulling on a sweater. These events might not seem like much more than minor annoyances, but there are hazards to consider when it comes to static electricity and how it affects us.

When a customer inquired about their television set, which stopped turning on after a static electricity occurrence, a Consumer Electronics Expert on Justanswer replied, “The only thing you can really do is to unplug the TV from the main wall power and let sit, maybe for a couple of hours or overnight. If still nothing, then it's probably the microprocessor that has been damaged from static discharge.”

Something as simple as a static shock rendered a television inoperable, leading to potential repairs totaling over $200 in order to get it working again. In today’s age of technological dependence, this makes the seriousness of static electricity in the home hard to ignore.

Causes for static discharges may include low humidity

As mentioned above, static comes from built-up electrical charges on materials that aren’t natural conductors. Beyond that, there are certain situations that will allow more static to build up and thrive, which can become an issue over time. One such situation is an environment with low humidity, as explained by Andy Lambert, a Home Improvement Expert on JustAnswer.

“Overly dry air can inflame the symptoms of sinusitis, lead to laryngitis and get in the way of a good night's sleep,” Andy says, before leading into part of what causes static electricity. “Also, low humidity levels cause problems in furniture and pianos due to wood shrinkage and increase the incidence of static electricity shocks.”

Excessively dry air isn’t the only risk factor for static shocks in the home. Sometimes the issue can be more localized, as one customer on JustAnswer discovered when their treadmill machine began shocking them every time they touched the handles. The cause for this? The Fitness Equipment Expert who responded deduced that the machine was in need of a new ground wire. Improper grounding is a common factor when it comes to what causes static electricity shocks in appliances.

Preventing static shocks in the home

Whether you’re tired of getting zapped every time you try to open a door, or you’re concerned about potential damage to your beloved electronics, there are methods to help you cut down the amount of static in your home.

If you wear a lot of synthetic materials, switching to more natural fibers might help you avoid some of the shocks plaguing you. Synthetics tend to attract more static, so making this simple change can actually make a noticeable difference. Beyond that, Pauline, a Health Expert on JustAnswer, has some advice for reducing static shocks.

“Ensuring the environment is moist is also a good idea, difficult outside but at home keep a humidifier going in dry weather,” Pauline says. “Carpets and shoes are a prime cause of static so where possible replace nylon carpets with hardwood flooring. Rubber soled shoes may be helpful.”

Humidifiers can range in price from costly to affordable, and there are other methods for naturally improving your indoor humidity – even houseplants can help combat excessively dry air! To learn more about how you can avoid the hazards of static, or for more information about what causes static electricity, reach out to an Expert on JustAnswer today.

What's the worst case of static electricity you've faced? Share your experiences in the comments below!