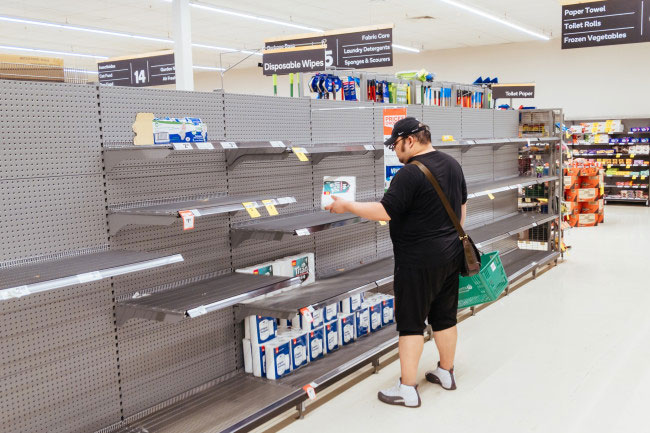 The Weird Things People Are STILL Hoarding During COVID-19

Several weeks into the pandemic, I ran out of cookies. Not an emergency, yet. But I put “chocolate chip cookie dough” on my shopping list to forestall one. When I got to the store, though, there was no cookie dough. The five-pound tub I’ve been walking past at Costco and deeming “dangerous” for years is suddenly out of stock? At Costco? Impossible. I asked for help. “It’s gone,” a masked salesperson told me. “People are hoarding it.”

Hoarding cookies is a terrible idea. But if, as the Mayo Clinic says, people hoard the things they believe they’ll need, that have emotional significance, that remind them of happier times, because they feel safer when surrounded by it, or because they don’t want to waste anything, cookies make more sense than a lot of things.

But everyone hoards the thing that makes them feel safe. They don’t hoard things that make me feel safe. So, in these distressing times, we can learn a lot about the collective psyche of our fellow humans from the things they hoard.

But the number one thing we will learn – as you can see from this list of things we’ve been collectively hoarding – is that people are weird.

In Texas, They Hoard Chickens

We all have our Zombie Apocalypse checklist, right? Well, in Texas, chickens are high on that list. Baby chicks are selling out faster than chick growers can hatch them there. And not just in Texas, either. This is a national trend. I have to admit that I’d be stockpiling baby chicks, too, even though I know they won’t lay eggs till long after we are out of lockdown, if I could talk anyone else in my life into it. Chickens are cute, produce eggs, offer company, are an effective alarm system, eat bugs, and make a nice BBQ if things get bad. Chick hoarding is not uncommon. “When times are tough, people want chickens,” says the New York Times. “Chick sales go up during stock market downturns and in presidential election years.”

Not all hoarding is about food-prepping. People have been panic-buying guns, too. Gun and ammo sellers nationwide are reporting record gun-sale spikes. This makes perfect sense if you apply the “apocalypse checklist” metric to pandemic reasoning. If you need to protect your family and property from marauding Zombies, you’re going to want a few guns. It doesn’t make much sense for a pandemic where everyone is staying home with huge stashes of cookies to avoid a killer that’s microscopic. But maybe some people didn’t have time to update their apocalypse from Zombie to Covid?

Everyone is a Baker Now?

Apparently, when trapped at home, people resort to the behaviors they would have exhibited in preindustrial times: They bake bread. Everyone, even people who’ve never baked before, are doing this. They’re doing this in such numbers that flour has become difficult to find. A friend, yesterday, offered me free flour. She panic-purchased 50 pounds of King Arthur artisan flour. She lives alone. She is not a baker.

This bread-baking mania has also caused a temporary shortage of yeast. Yeast! This is a thing most people could not identify in a lineup three months ago.

The joke on social media is that there are two pandemic looks: Shaggy and buzzed. Hair salons are all closed, leaving people to their own when it comes to cut and color. This has played out, neatly, into two camps. 1. The camp that gave up. And (2.) the camp that didn’t.

The camp that didn’t has been buying up all the hair clippers and hair dye. I, personally, know two women who buzzed their own hair off. And I have learned a lot about DIY hair color from social media lately. Even celebrities are doing their own hair. (With mixed results.) So, this might also lead to a post-pandemic fashion trend. According to Walmart, sales of hair clippers rose by 166 percent early in the pandemic. Hair color sales rose by 23 percent.

If the pandemic shut down lasts two months, you might want a double supply of feminine products on hand. That makes sense. Does that explain why Amazon, Walmart, and other retailers are sold out of all major brands of tampons? The situation has PG (makers of many of those brands) working overtime – while maintaining social distance – to restock the supply. It’s causing a real problem for women without the funds to hoard. And the women of Twitter are not having it.

Cash in the Mattress

There is nothing that illustrates who the hoarders are – hint: not poor people – better than the rush to stockpile cash. In some neighborhoods – hint: not the poor ones – there was such a rush for cash that some banks ran out of $100 bills. People stockpiled tens of thousands of dollars in cash. This trend prompted a statement from Jelena McWilliams, chairman of the Federal Deposit Insurance Corp., which safeguards bank accounts. "Forget the mattress,” she said. “Forget hoarding cash. Your money is the safest at the bank.” Translation: The population that can’t get unemployment because the website crashes are not going to help you when someone steals your giant suitcase of cash.

Given the number of jokes about people coming out of pandemic quarantine and going straight to rehab I’ve seen flying around social media, it comes as no huge surprise that people have been stockpiling booze. Sales of spirits jumped 75% over the same period last year early in the pandemic as people prepped for the lockdown. Wine sales were up 66% while beer sales rose 42%. And online sales far outpaced in-store sales, jumping by 243 percent. I swear that wasn’t all me.

There’s no data to support it but there is a fair amount of anecdotal evidence that people are stockpiling ice cream. Nancy Pelosi certainly is. And there are a lot of frustrated would-be ice cream hoarders on Twitter, myself included. There’s no need to explain this one. I just wish I’d thought of it sooner.

You can only watch so much TV, even Netflix. Bars are closed. Restaurants are closed. No one is having parties. Travel is on hold. The list of things you can’t do is long. Every book loving introvert in the world sees this as an opportunity we never thought would happen. That overstuffed bookshelf is no longer a guilty pleasure. This – right here – is the sort of emergency it was created for. People are so into books, right now, that Powell’s Books in Portland – a much loved-by-readers source -- had to hire back 100 of the 300 people it was forced to lay off to help fulfill online sales. Something good has come out of this after all.