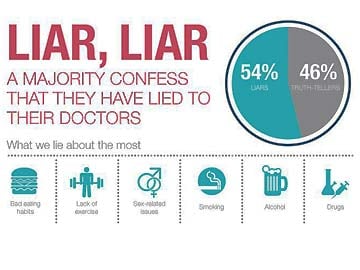 Survey: Most Americans fib to their doctors

If you've ever been too embarrassed to discuss a personal health issue with your doctor, you're not alone.

A new survey from JustAnswer reveals that over half (54 percent) of survey respondents have lied to a doctor about a health issue, and 63 percent admit they are more likely to ask about sensitive topics such as sex and STDs online, rather than addressing them face-to-face in the doctor's office.

What are they lying about?

When it comes to more intimate health questions, Americans are often uncomfortable having an in-person conversation with a medical Expert. The most common topics that 54 percent of respondents are fibbing about to their doctors include poor diet (18 percent), lack of exercise (18 percent), sex-related issues (15 percent), alcohol use (15 percent) and smoking (15 percent) -- with men more likely than women to lie to their doctors about smoking, alcohol and drug use.

In addition, 41 percent of people were more likely to ask questions about sex online than offline. Other topics that were more popular for online conversations: STDs (29 percent), drugs and alcohol (16 percent), and weight (15 percent).