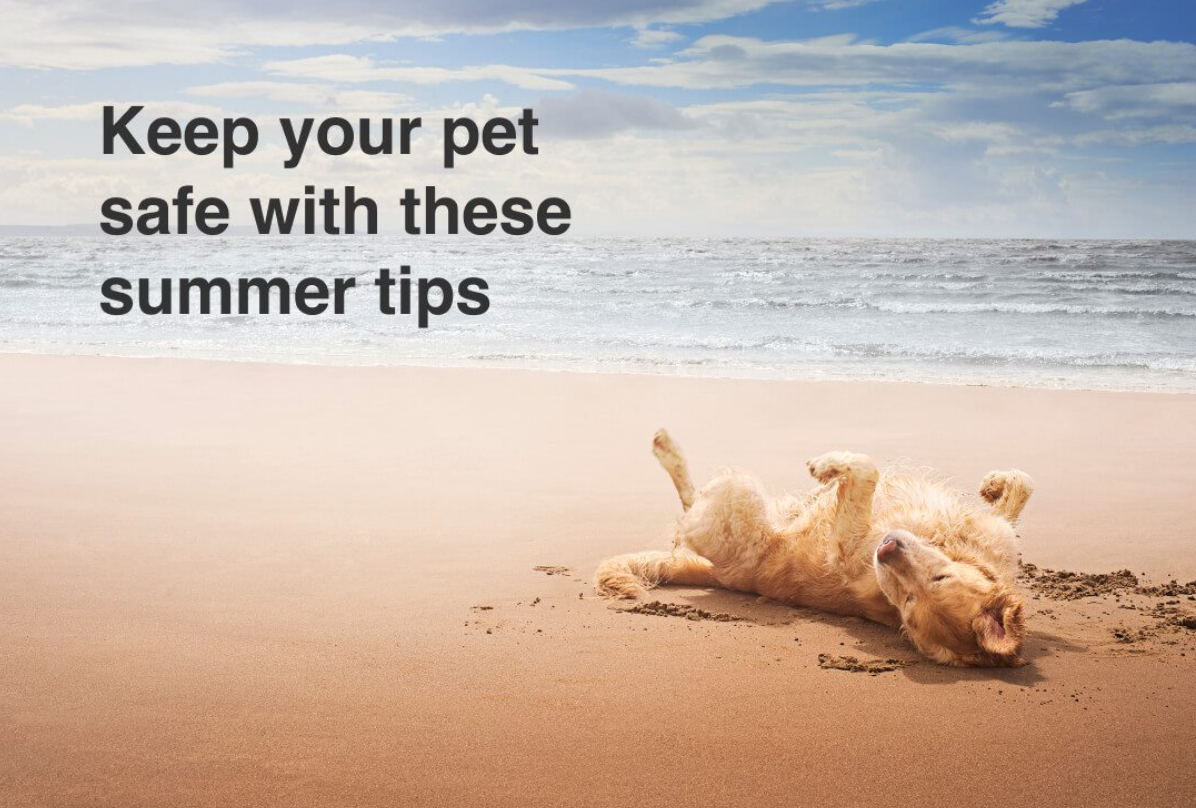 Summer is a fantastic season for enjoying fun activities with your pets, but it has its share of hazards as well. Let's take a look at some of the most common problems our pets face during the summertime and talk about the steps you can take to try to prevent them.

Our pets are at risk for the same types of heat-related illnesses that we are, namely heat exhaustion and heat stroke. Heat exhaustion causes symptoms like muscle cramps, weakness and nausea, but if it escalates to heat stroke, life-threatening organ failure can result. Horses and dogs tend to be at the highest risk because of their enthusiasm for and dedication to exercising with their human counterparts, even when it's getting too hot and they cannot effectively cool themselves. Let’s look at how risky the heat can be for horses and dogs more closely.

A bluebird day may be a beautiful time to go for a trail ride and you can count on your horse to dutifully carry you along, but the heat and humidity can combine to make this potentially dangerous for your horse.  If the air temperature in degrees Fahrenheit and the relative humidity in percent add up to 150 or more, your horse's ability to cool himself is greatly reduced.  This effect is even more pronounced when the humidity is higher than 50%. These conditions might not be terribly uncomfortable for you, but your horse generates a lot of heat while exercising and can quickly end up having problems like heat cramps, heat exhaustion, or even potentially life-threatening heat stroke.

In order to avoid problems like this, check the temperature and humidity and do the math before heading out to ride or exercise your horse. Regardless of what the numbers say, if you’re out with your horse and he has been sweating heavily and becomes weak or reluctant to continue, immediately stop riding him. Move to the shade and remove his saddle and blanket, then pour water over him to help him cool down.

Our dogs also love to join us for outdoor activities in the summertime but it can be hard for them to avoid overheating when they get carried away with their activities and play. A dog won’t usually get overheated on his own initiative and will instead cease his activity and seek a cooler location, but sometimes in the face of overwhelming temptation he may overdo it. It's much more common for a dog to become overheated as a result of trying to keep up with us while we're out in the heat together. He is at higher risk when he’s working harder than you, like when he runs to keep up with a bicycle or four-wheeler. As a result, it’s not uncommon for a dog to overheat before his person does.

If you're out with your dog, pay attention to early signs of overheating like excessive panting, lying down, or stopping to rest in shady places. Sometimes a hot dog will dig up a patch of dirt to lie in so he can cool his tummy. Avoid the temptation to continue in spite of these early signs. Cut your walk short and find a shady place to cool off and wet your dog down before continuing.  Pouring water over your dog is the best way to cool him off if he is overheated. Because heat stroke can be life-threatening, do not hesitate to seek veterinary care if your dog appears to be seriously overheated and is showing signs like weakness, vomiting, diarrhea, or collapse.

Rabbits living outdoors in hutches are also at risk for overheating when the summertime temperatures start to soar. Even if you’ve provided shade and moving air, that may not be enough for rabbits to stay cool. During warmer temperatures, check on outdoor rabbits frequently and keep an eye out for signs of overheating. A bunny that's too hot will lie down all stretched out and may even hold its mouth open and appear to pant. Placing a frozen water bottle next to your rabbit may provide some degree of relief, but it's best to move rabbits indoors during dangerously hot weather.

Indoor pets are at much less risk for heat-related illnesses.  Cats are good at finding cool places to rest and simply avoiding activity and the body heat generated by exercise. Birds and reptiles are somewhat tolerant of higher temperatures and can usually cope with relatively high ambient temperatures like 85-95  degrees Fahrenheit. Small mammals like rodents, guinea pigs, and ferrets can also adapt fairly readily and are unlikely to be affected by temperatures that a human can also cope with. If your small animals are housed in a glass aquarium, however, this can interfere with air flow and increase the likelihood of overheating, so keep a closer eye out if that’s the case. If you are lucky enough to live in a climate controlled space, the air conditioning that keeps things comfortable for you will also keep it comfortable for your pets.  Be sure to have an emergency plan in place, however. If the power goes out, you will need an evacuation strategy for the safety of both you and your pets.

The Dangers of Hot Pavement and Hot Cars

Pavement and asphalt retain a lot of heat and dogs who walk across hot surfaces are at risk for burning their paws. The risk for burns goes up the longer your dog is out walking on hot pavement, but when the temperature is high enough, a burn can occur in a relatively short period of time. Because your dog is happy to be out walking with you, you cannot count on him to show signs but his feet are burning. If your dog starts holding up alternating feet or seems to cry or whine, take action right away to cool his feet. Have a water bottle with you so you can pour it on his feet if needed. More importantly, get off the pavement as quickly as possible, carrying your dog if you need to and are able to.

To avoid burned paws, check the temperature before you go outside. On a sunny, 75 degree day, it doesn’t take long for the surface temperature on the pavement to exceed 125 degrees Fahrenheit. If you are planning to head out for a walk in temperatures over 75 degrees, check the pavement with the back of your hand before making your dog walk on it. If you are unable to leave your skin in contact with the pavement for more than 10 seconds, it is too dangerous for your dog to walk on the pavement. Choose an alternate route where your dog can walk on grass or avoid the heat entirely by going out very early in the morning or in the evening instead.

Hot cars kill dogs. We all know this unpleasant reality and it's terrible considering what a dog would go through when left alone in a hot car. Even though you may think your errand is only going to take a couple of minutes, something unexpected might come up that distracts or delays you. The temperature inside a car can become dangerously high within only a few minutes, exceeding 104 degrees within only 10 minutes when it's 85 degrees outside. In addition to running the risk of putting your dog through a horrible amount of suffering and risking death, leaving your dog in the car on a sunny day might result in returning to your car to find law enforcement there or a good Samaritan who’s broken your window to save your dog.You may also get a ticket, depending on your location. Some cities in Colorado, for example, have ordinances against leaving a dog in a car when it's over 70 degrees Fahrenheit outside.  If it's going to be more than 70 degrees outside and you can't take your dog inside with you, leave your dog at home.

The Other Danger with Cars

More dogs are hit by a car during the summer months than during any other time of the year.  Likely explanations for this include the fact that more cars are on the road and the dogs are spending more time outside. Additionally, kids are home from school and therefore it's more likely that a backyard gate might be left open. Dogs are also more likely to be traveling with their families on vacation, and a dog who slips his leash in an unfamiliar place is more likely to experience an accident before he is found. Even though summertime road conditions are generally better than in the winter, more motor vehicle accidents occur during the summer months. Dogs are often injured during accidents along with their human counterparts, and things get even more complicated if a dog happens to escape the accident scene into unfamiliar territory. Keep your dog on a leash or secured in your yard and put him in a hard-sided kennel carrier in order to prevent injury as a result of an accident with a car.

Summer brings an opportunity for more encounters with other dogs and wildlife. These encounters don't always go well, and injuries can result. Keep your dog on a leash to avoid unwanted encounters with animals of all kinds. It's also better and safer for wildlife if you keep your dog on a leash as you move through their territory. The dog park is a great place to play on a summer day, but when the park is busier, social encounters that go poorly are more common.  If the park seems too busy or is frequented by dogs with less than desirable manners, it's better to opt to go somewhere else.

Bees move slowly and make a lot of noise so it's only natural for dogs to be curious about them. Unfortunately, it's not unusual for a dog to try to catch a bee in his mouth. It's also not unusual for the dog to succeed. The resulting sting can cause pain and swelling, but it's usually not life-threatening. It may be best to avoid locations that have a lot of bees like rose gardens, particularly with a younger puppy.

Puppies at the Picnic

Summer is the season for barbecues and picnics. Get-togethers like this are one of the highlights of the season for many people and dogs will often enjoy these occasions as well.  Food is generally plentiful, but so are distractions. As a result, it's not unusual for a dog to end up eating a variety of things that he doesn't normally eat and probably shouldn't. A kind-hearted guest with the best of intentions might feed your dog from his plate. Your dog might find his way into forgotten plates of food left unattended, unsecured garbage, or even do his best to consume the grease that accumulates on the ground under the grill, gravel and all. This type of dietary indiscretion can  cause a variety of symptoms ranging from minor GI upset to more serious problems that require hospitalization, like pancreatitis. Sometimes dogs end up eating things like bones or corn cobs that cause a blockage in the digestive tract and then life-saving emergency surgery is necessary.

Get out there and enjoy summertime activities with your pets, but be aware of these common summer hazards so you can take steps to prevent them. Recognize early symptoms of heat stress and heat exhaustion so you can take corrective action before it progresses to life-threatening heat stroke. Keep your dog on a leash and be vigilant to avoid a variety of summertime hazards. After all, you want to spend the summer enjoying the beautiful weather with your canine companion and not worrying about him in the emergency hospital or how you’ll cover the expense of a large vet bill.