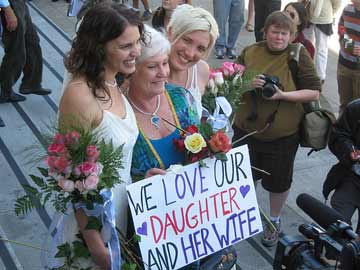 While the Supreme Court's historic rulings on same-sex marriage are good news for many couples, the remaining complexities highlight how much same-sex couples may still need legal help to guarantee certain marital and family rights.

"There will be just a ton of issues, quite frankly -- at least in the short term," said Benjamin M. Burt Jr., Esq., a lawyer on JustAnswer. "Especially in the states that don't recognize same-sex marriages," he said, noting that the dismantling of the Defense of Marriage Act (DOMA) is favorable to couples who marry in states where it's legal.

Same-sex couples may still face complications, for example, if:

Divorce may also be a particularly difficult issue. Recently Burt worked with a gay couple who sought help on the site. They wanted a divorce but lived in a state where their marriage wasn't even recognized. He told them news "they hoped not to hear" -- they had to file for divorce in the state where the marriage license originated.

So what's an eager, marriage-ready same-sex couple to do now? Two attorneys on JustAnswer offered these tips:

Burt: "Realize that the law creeps along at a snail's pace and very often lags well behind social progress and contemporary mores. Also, don't abandon 'work-arounds' -- such as drafting contracts, wills, power of attorney, and other documents -- that same-sex couples have relied for many years prior to the modern era."

Ely: "If you do wish to be formally joined in a same-sex marriage, marry and live in a state that has a strong foundation for it and has survived challenges in the past, like Massachusetts. If anything, you will know that in Massachusetts the marriage is always likely to be recognized."

"As our country moves closer to full marriage equality, I'm proud that JustAnswer helps same-sex couples navigate the tricky legal or tax issues," said Andy Kurtzig, CEO of JustAnswer. "These Supreme Court decisions will trigger a lot of questions for same-sex couples, and the Experts on JustAnswer are ready to provide quick assistance for couples in every state."

The following advocacy groups offer many resources for same-sex couples who want more information about laws and policies: Lambda Legal, the Freedom to Marry Coalition, National Center for Lesbian Rights, and the Human Rights Campaign.

If you want to contact a lawyer about any issue with your marriage or family situation, you can speak to an attorney anytime on JustAnswer.