How long after shoplifting can you be caught?

If you’re wondering how long after shoplifting you can be caught, maybe it’s your conscience talking to you

There are a couple of topics that literally rule the Legal category on JustAnswer. One of them involves an activity we don’t normally discuss in polite society. But the other we can – and should – consider in public: Shoplifting.

Over the past 12 months, one particular question drew curious readers in droves – 20,104 of them, to be exact, spending about 10 minutes each – and overall, there are more than 8,500 questions about shoplifting on JustAnswer.

What subject matter is so absorbing, and what does it say about shoplifters?

How long after shoplifting can you be caught?

In fact, this question in some form or other appears not just all over JustAnswer, but all over the Internet. Some people are asking for themselves, some for “a friend,” and some for their children. The bottom line is, lots of people appear to get away with shoplifting – but an awful lot of them are haunted by the specter of legal retribution down the line.

How long after shoplifting can you be caught? That depends.

"Shoplifting" generally refers to the theft of merchandise from a store or place of business. Shoplifting is a type of larceny, which simply means taking the property of someone else without their permission, and with the intent to permanently deprive the owner of the property taken.

Though states may punish shoplifting under their general larceny or theft statutes, many states have enacted statutes to specifically address shoplifting.

Even if you get out of the store unnoticed, there’s no way to know how long it might take to be caught. Technically, there’s a statute of limitations on crimes such as shoplifting, typically one to two years. It depends on the state where it takes place, the value of the merchandise stolen, and the type of merchandise stolen.

Firearms or explosives will cost you much more dearly than will inexpensive jewelry lifted at WalMart!

But it also depends on whether anyone will spot your crime on surveillance video. You may not realize it, but with shoplifting losses spiraling out of control, cameras are literally everywhere these days, as are trained loss prevention (LP) professionals.

I stole some stuff from JCPenney but I was not caught, but I think they saw me on the camera. Can they arrest me out of the store? They haven’t contacted me yet, but when I went there the next day they were all around me, even the security, even though I did not do anything at that time. 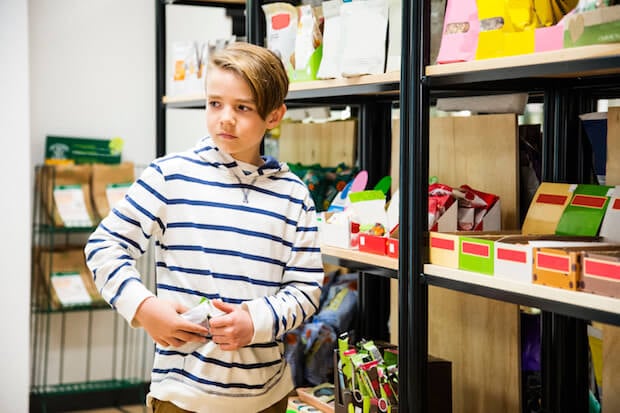 Who's watching you when you shoplift? That's the question you have to ask yourself.

The answer is complicated, and there’s not a lot of reassurance for a guilty – or just worried – conscience. The JustAnswer Expert, Hammer O'Justice, explained to the customer that while a shoplifter cannot be arrested at the store for a crime previously committed, the store could have police swear out a warrant based on evidence, or file charges against the thief, who would then receive a summons and would have to appear in court.

So a shoplifter who escaped without arrest at the store can definitely be charged with a crime later. But security personnel would ether have to have a reason to go back and view earlier surveillance video – such as seeing suspicious activity – or would have to be viewing that footage randomly, which, LP pros say, seldom happens.

Of course, you may be thinking that a shoplifter is still off scot-free because the store doesn’t know his or her identity. But if the individual has used a debit or credit card at the store, identification is fairly simply because many retailers now employ security software with face recognition features. If a shoplifter’s face shows up using a card at a specific time, it’s only a matter of checking the sales records for an identity.

Also, many shoplifters on JustAnswer and around the Internet report that while they weren’t stopped, they were followed out of the store, where LP officers may have been trying to catch sight of a license plate.

Why shoplifters sometimes aren’t stopped in the store

And for those wondering about being picked up after the fact, it’s also true that there are many reasons why they might not have been stopped at the store, and only one of them is because the security team has no evidence.

First, in order to ensure airtight cases and to avoid lawsuits, LP officers are taught that if they didn’t see it happen, it didn’t happen, so they’d let a shoplifter leave if they have only a suspicion. But it the shoplifter really did steal something, all the LP staff has to do is review surveillance tape and provide it to police.

Such video can also lead to having your photo plastered all over a mall, or at least by employees’ time clock, so you’re more likely to be under personal surveillance and finally caught if you try shoplifting again.

Also, if you’re stopped outside a store but run away, the LP officer is not allowed to touch you or chase you. This is a liability issue for the store as well as a safety issue for employees and shoppers. But again, that doesn’t mean there’s no proof of your crime. As one attorney advise a shoplifter: “Cameras make excellent witnesses.”

And finally, keep in mind that stores are becoming increasingly sophisticated in their treatment of loss prevention, and you could be placed into a massive database. You will be profiled, and you never know when that might come back to bite you.

As avvo.com reports, shoplifting is one of the most common theft crimes in the U.S. It’s estimated that some 90% of the population has shoplifted at least once in their lifetime – costing businesses about $16 billion every year. 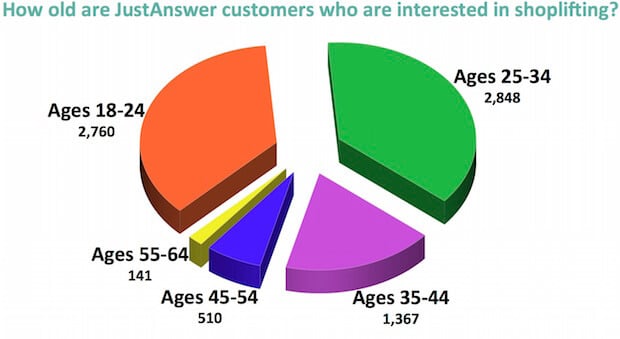 Statistically, adolescents are the biggest shoplifters, accounting for nearly 50% of all shoplifters. However, they only steal one-third as much as their adult counterparts. At JustAnswer, customers reading about shoplifting during the past 12 months are overwhelmingly age 18 to 34, with the numbers getting smaller as the age group goes up.

For those JustAnswer customers whose gender is known to Google, females outnumber males by more than 2 to 1: 7,313 to 3,735.

Even more interestingly is this fact: Most people asking questions anywhere on the Internet are “asking for a friend.” Here’s a classic from JustAnswer:

My friend shoplifted in December. Cop came to his door March 20th, per neighbor, but I had moved 2 hours away …

The Expert on JustAnswer who responded promptly asked for clarification, and the customer decided to come clean.

My friend is me ... sorry for the confusion.

The customer then added:

May 11 received phone call from police but no voicemail. I called back but was unable to be helped as to why call. No warrant or summons received in mail. I did have my mail forwarded. Should I answer next phone call? Am I probably under investigation? How long does it take to receive a warrant? Item was $500.

The Expert could not predict how long it might take for this situation to develop, given the variables – and the customer’s anxiety over not knowing what was coming was clearly evident in the repetition of questions throughout the session.

Even greater anxiety was apparent this shoplifter’s comment on another forum:

I am terrified that one day I will be arrested this year for the shoplifting I did while I was in school and ruin my life.

And this is the bottom line. While minors are rarely charged, many others are these days, as shoplifting costs continue to rise for retailers. Such charges could range from a misdemeanor to theft, and penalties range from a slap on the wrist to a fine to jail time – and lately, retailers are also taking more and more to threatening to sue shoplifters for damages if they don’t fork over hefty sums to cover the cost of loss prevention.

So if you’re searching the Internet for answers to the question, “How long after shoplifting can you be caught,” you’re in for a lot of stress and anxiety. Not only is there no solid answer, but during the entire time you’re wondering, you get to deal with a guilty conscience and the real possibility that the rest of your life could be impacted by having a criminal record!

If you’re wondering about when the axe will fall after you acquired a bit of merchandise through a five-fingered discount, clearly you’ll need advice to sort through the variables. And just as clearly, the legal Experts on JustAnswer are experienced and accustomed to helping customers with these questions.

Have you ever shoplifted without getting caught? How did you feel afterwards, and for how long? Please share your thoughts with us in the comments below.