Fearful pets: A look at dog and cat anxiety triggers

Sometimes, sifting through data that was compiled over time can reveal unexpected tendencies and trends. When we took a look back over the course of an entire year for the most popular pages on JustAnswer related to being “afraid,” this is exactly what happened. We found that the top four results, responsible for a whooping 40% of all the views, had nothing to do with issues directly impacting people. Instead they were all connected to pet behavior, and more specifically, surprising dog and cat anxiety triggers.

To make the trend even… trendier, the top five pages and the concerns depicted on them could be grouped into two categories. Having a cat or dog that is irrationally afraid of something is hardly a rarity among pet owners, but the nature of the following phobias may still catch you off guard, as it did for the concerned owners who sought out Expert assistance online. For a look at the anxiety triggers for cats and dogs that have garnered the most attention among visitors to JustAnswer, read on!

Many of the things we as people are afraid of are very specific. Some individuals are afraid of spiders, some have a fear of heights, and a portion of the population even manifests a fear of the dark. When it comes to animals, phobias are all too common, but they can be much more difficult to define. For one thing, your pet most likely can’t communicate the specifics of their fears to you. For another, animals tend to have much more general fears than many people experience, as is evidenced by the top two pages we uncovered:

Why is my cat so skittish and afraid of everything?

It probably can’t get any more general than being afraid of “everything.” In spite of the scope of this brand of phobia, it’s something a lot of cat owners deal with – after all, the question accounted for a whopping 26% of all the views we looked into! In any case, the concerned owner was hoping to better understand why their cat was so afraid all the time. They also wanted some advice regarding ways of helping the feline calm down.

The cat in this case was typically quiet and well behaved, but also prone to leaping with fear due to any sudden movements. His jumpiness even made it hard to pet him, and he’d hide from strangers whenever they’d enter the house. Cerecita, the responding cat veterinary Expert, offered some guidance and peace of mind:

“Some cats are just more skittish than others. Some are very mellow and others are just 'fraidy cats; different personalities, just like people. If this is how your cat's always been, it's probably just part of his make up,” she explained. “If he was calmer and suddenly became skittish, that would bear checking out with the vet to make sure there is no medical basis for this behavior.” 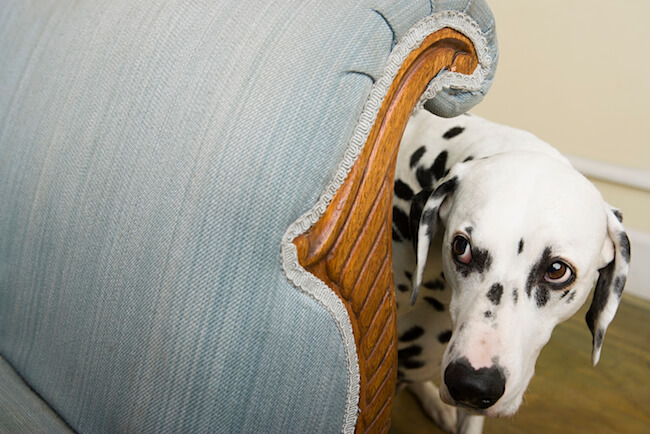 Cerecita went on to stress the importance of taking steps to keep the feline as comfortable as possible, like leaving him alone when he’s sleeping and allowing him to approach the owner for bonding, not the other way around. Providing a cat bed or hiding spot could also inspire more feelings of safety, thereby lessening the jumpiness.

My dog is suddenly afraid to go outside.

This troubled customer was hoping to learn why their pup, who used to enjoy walks as much as any dog, had suddenly developed a fear of the outdoors. This phobia reached a point where the dog would only go outside if forced to – luckily, the animal behaviorist who replied was able to provide some helpful insights on what might correct the issue.  \

The Expert, Sally G., recommended trying to retrain the dog to understand that going outside for a walk is perfectly safe. If the outdoor phobia was caused by something scaring or hurting the animal during an outing, the dog might have forged a connection between going outside and bad things happening. By teaching it that this isn’t the case through gradual steps (carrying the dog outside yourself, driving it to different places where it used to enjoy going, etc.), the owner could remove the bad connection and restore the dog’s trust in going outside. 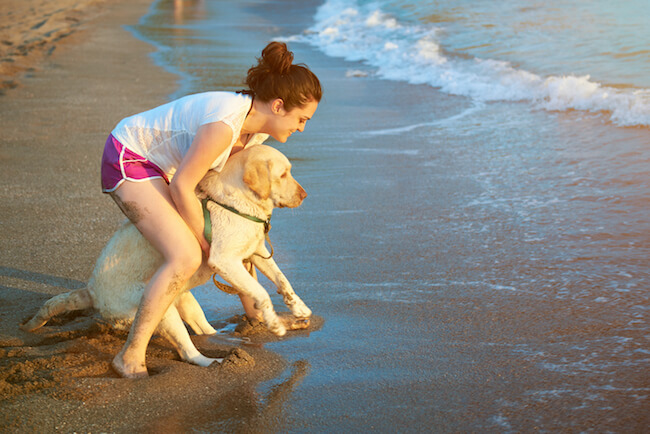 Fear of water is common, and can be beaten with love and support.

Household pets and their fear of… food?!

Who doesn’t enjoy a nice meal? Our animals do as well… until they don’t. Commonplace as unexpected fears might be among pets, a fear of food-related things is particularly intriguing, if for nothing else than the sheer oddness of it. However, food phobias can be triggered by a range of causes, including some that are serious enough to warrant a trip to the vet’s office, as soon as possible.

We have a 13 year old cat who is suddenly quite skinny. Over the past week, he has gone from nibbling at food, to only drinking a bit of milk, to avoiding the food/water bowls altogether.

The customer in this case was concerned about their older cat, who’d reached such a level of fear that he actually ran away from the water bowl as if stung by it! The answer here was fairly simple for the responding cat veterinary Expert to discern.

“It sounds like he is obviously experiencing pain in the mouth or upper GI tract,” said Micki. “I would carefully inspect his mouth and as far back in his throat as you can. Look for anything foreign: sores, redness, broken teeth, cuts, that sort of thing.” The customer went to the vet, where they discovered Micki was correct – the problem was due to inflammation of the gums, which made eating and drinking very painful for the poor cat.

My dog has just developed a fear of her food bowl and refuses to eat or drink.

This customer had already been the the vet, where they were unable to uncover anything that could be wrong with the poor pup, who’d already lost a lot of weight to that point. After asking some questions for the sake of familiarizing herself with the customer’s situation and the specifics of her dog’s case, the verified dog trainer on JustAnswer was able to provide some advice.

The Expert, Martha, believed there was a possible connection to a traumatic event that occurred during feeding in the dog’s past – possibly even when she was just a puppy – that was affecting her in the present. Something could have triggered the old anxiety, bringing it back to the surface, and given that this could be just about anything, there would be no way to identify it.

Martha went on to recommend building up the dog’s confidence through leadership exercises and training her while employing positive motivation techniques. Agility training and “purposeful” exercise, that is, walks that are meaningful and focused on a destination and not simple meandering, can also be beneficial. In the short term, Martha advised changing up the feeding circumstances as well, by adjusting things like the location, food dish, and general environment.

If your dog or cat is afraid and you don’t understand why, take your concerns to the Experts on JustAnswer! They can provide some insights that may clarify what’s going on, and the faster you understand the issues at hand, the sooner you can get your furry friend the help they need.

Have you found yourself dealing with a scared, anxious pet? What remedies worked or didn’t work for you? Please share your experiences with us in the comments below.