Don’t sleep on the warning label: Medications that cause insomnia

If you’re dealing with insomnia, the culprit may actually be something you were prescribed by a physician.

Insomnia can be a serious issue, to which anyone who’s dealt with this debilitating disorder can attest. Not getting enough sleep can hurt every other aspect of our lives, and when it’s bad enough, it can impair us to the point of making us a danger to others. Sleeplessness affects tens of millions of Americans, and to make matters worse, it can arise as a result of complications from the drugs we take.

It’s bad enough that the supplements and medications we’re prescribed don’t always work as they’re supposed to. But when they lead to insomnia, which in itself could require its own medications to correct, you’re left with a truly frustrating experience. And worse still, this issue occurs more often than anyone would like. How often, you ask?

Out of all the page views related to insomnia on JustAnswer over the course of a year, over 44% were related to supplements and medications as the root cause! Of the top 10 most-visited pages on the topic, seven fit into this category.

Out of the seven relevant pages we looked at, the question that produced the most visits was:

Can I take melatonin and Nyquil for my insomnia, after taking USP Labs Oxyelite Pro?

This question was responsible for a whopping 25% of all the visits related to difficulty sleeping. As such, it’s safe to say that a lot of people have found themselves faced with sleeplessness as a result of taking Oxyelite Pro, a weight loss supplement commonly utilized as a fat burner.

As for the answer, we have Dave, a pharmacist on JustAnswer to thank for that:

“Yes, it is fine to take the melatonin and Nyquil together,” he says, “but if you take the Oxyelite Pro earlier in the day, you may not need anything!”

Dave also cites that the reason behind the insomnia is the fact that the supplement’s formula includes stimulants like caffeine. Ensuring that your dose is taken earlier in the day, such as in the morning or around lunchtime at the latest, can help prevent the sleeplessness that can sometimes occur when taking stimulants.

Some other commonly reported Oxyelite side effects include:

Some medications make you choose between depression and insomnia

When it comes to insomnia, some categories of medication have more of a reputation than others. Antidepressants are one type of drug that has been known to cause sleeplessness in patients, and this is an observation that is fully supported by JustAnswer’s statistics.

Insomnia due to antidepressants accounted for at least 10% of views. This is highlighted via three question topics in particular, with each one pertaining to a different medication.

Can I just stop taking Lexapro after 3 days? The insomnia is too much.

Just under half of the antidepressant-related views went to this question, which was put forward by a customer who’d decided they were ready to move on from their Lexapro medication. In their opinion, the difficulty sleeping was overwhelming the benefits of the drug, and they wanted to know if stopping altogether would produce any harmful effects.

Dr. Z, a psychologist on JustAnswer, advised that: “If you have only been on the medication for 3 days, then it is permissible to stop the medication right now with no risk for adverse effects.” On the other hand, he went on to say that the insomnia many people experience with Lexapro and other antidepressants is “usually only temporary as your body adjusts to the medication.”

I need a remedy for insomnia, from taking 100 mg Zoloft for 3 weeks now

This customer was also in need of help with sleeplessness, with the added complication of having already tried a solution without success. A 150-mg dose of Trazodone helped them sleep, but not without also leaving them with hangover symptoms. Dr. Vikas, a psychiatrist on JustAnswer, recommended a re-evaluation of the sleep aid previously prescribed to the customer.

“The first thing you can do is to discuss with your doctor about reducing the dose of Trazodone to 50 mg, to be taken at night. Zoloft, being an activating antidepressant, can be taken in morning. When taken in the evening or at night, it can cause insomnia.”

Can I take melatonin with Pristiq to help with insomnia? If so what dose is effective?

Guidance on this topic was provided by Dr. Vikas once again: “There is no significant interaction reported between these two medicines, but since every patient is unique,” he warned, “please take melatonin only after your treating doctor agrees to it. For insomnia, 3 to 5 mg is sufficient in most cases.”

The doctor went on to call on some of his own experience, as he found that melatonin was not a useful sleep aid based on his own recollections. Instead, he recommended another alternative, such as Zolpidem, which could be prescribed by a medical care practitioner to combat insomnia. 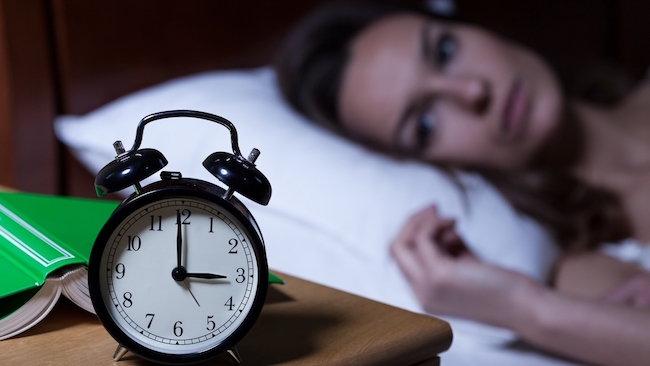 In fact, both of the next two items, which account for over 6% of all the insomnia-related views, are connected to anxiety medication withdrawals:

I ran out of Klonopin and I'm having insomnia and anxiety. Will Benadryl help? What else can I do?

I took Xanax for 3.5 weeks, with 11 days ago being the last night. I have been going through withdrawal since. I stopped cold, and the insomnia is insane.

In both of these cases, the Experts on JustAnswer stressed the importance of “tapering off” dosages instead of stopping cold turkey. Stopping with benzodiazepines needs to be a gradual process, or you will deal with potentially severe withdrawal symptoms. Insomnia is never fun, but stopping your Klonopin or Xanax doses abruptly can put you at risk for even more dangerous complications, like seizures.

If you’ve run out of your medication, notifying your doctor immediately is the best course of action. Taking something to help with falling asleep, like Benadryl, would not prove to be helpful in this type of situation.

Insomnia can also be caused by the unexpected

There’s probably nothing groundbreaking about the revelation that anti-anxiety medications and antidepressants can, either directly or indirectly, lead to insomnia. What is surprising is the fact that hundreds of internet users sought out this page:

Why does metronidazole cause insomnia?

You wouldn’t think that metronidazole, an antibiotic used in the treatment of infections, would cause insomnia. As it so happens, if you’ve been having trouble sleeping lately, and you’re taking this medication, the two could be connected!

Insomnia isn’t listed as a common side effect, yet it still has been reported in patients who’ve used the drug. Dr. Gupta, a medical Expert on JustAnswer, elaborated:

“The drug does penetrate the central nervous system easily, and can thus cause certain problems including insomnia,” he said, although he added that the exact cause for this result is unclear. As for whether the customer’s sleep habits would normalize after discontinuing the medication, Gupta maintained that: “It will get better, if related to the metronidazole.”

Insomnia never happens for no reason. Sometimes it’s because of our diet, with factors like sugar and caffeine intake determining the quality of our sleep. Other times, the source can be traced back to our lifestyle – not exercising enough, exercising too close to bedtime, staring at too many bright screens late at night. And these are only a small sample of the habits that can harm good sleep.

Of course, while these issues can all be addressed with the right adjustments to your routine, the same can’t be said for insomnia due to side effects from medication. If you suspect something you’re taking has affected your sleep, get in touch with an Expert on JustAnswer right away. Getting the information you need, as quickly as possible, could help you avoid a lot of lost shut-eye.

Have you beaten insomnia symptoms before? Are you battling it now? You’re probably tired, but take a moment to share in the comments anyway!