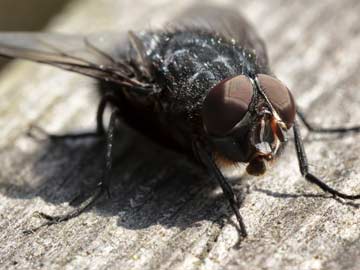 Can you get HIV from accidentally swallowing a fly?

Q: Is it possible to become infected after accidentally swallowing a black fly that might be carrying HIV+ blood? I was camping with my neighbor who has been HV+ for 9 years and two black flies were in my orange juice at the campsite. I took a drink and swallowed them before I realized. I have had 3 wisdom teeth removed, and there is still blood coming from the extraction sites.

A: There is absolutely no scientific evidence that someone could become infected in such a scenario. Honestly, I believe you have a much higher risk of being struck by lightning.

A number of scientific articles (including this one) have looked at the risk of HIV transmission from insects and concluded that it's not possible.

However, if you are still concerned by this, you can have an HIV test now, and again in 6 months. A negative test in 6 months would be considered 100% definitive.

I honestly would not worry about this episode as a possible route of HIV transmission. HIV is not as easily transmitted as most people believe.

-- Answer from Dr. Frank P., a family physician on JustAnswer.