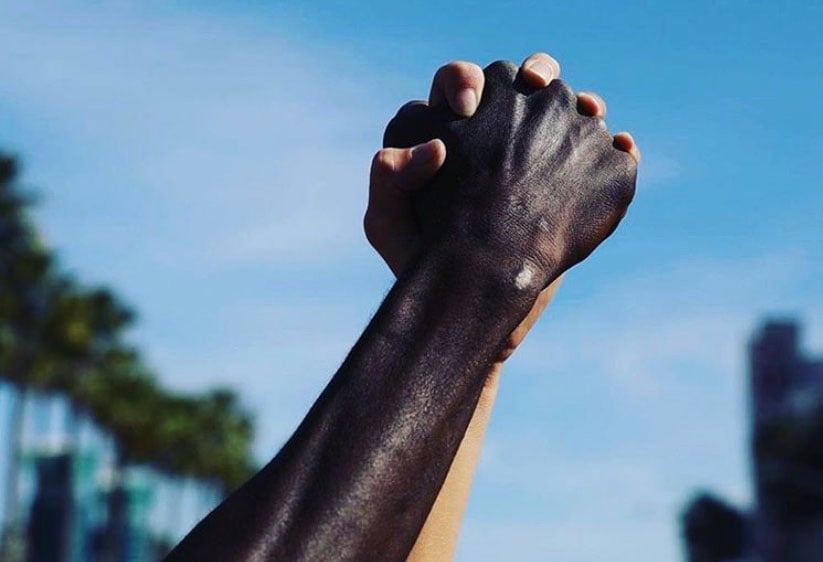 Black Lives Matter: Be an ally to the cause

We are all angry, furious really, about the injustice, the lies, the intimidation, and the brutality we see unfolding in the news and in our social media feeds daily. In the wake of the George Floyd murders, our collective fury erupted into the streets.

And when we got there, it was dangerous.

My daughter (21) went to a protest and, while trying to be an ally to a black man there who was being threatened by an armed police officer, was thrown against a wall, threatened, and “gassed.” (According to news reports, this was inert gas.)

She wasn’t hurt. The black man, though, was arrested at gunpoint.

“He was saying the same things as me. Doing the same thing I was doing,” she told me, furious. “They didn’t arrest me. But they arrested him! You have to show up with your white skin and privilege and take a stand against this horrific injustice!”

I’m proud to be schooled by my daughter on white privilege and systemic racism. But I’m also worried about her. She’s young. She’s right. And she’s brave. But protesting is dangerous work. Especially if you’re black or brown. But even if you’re white.

So, since this is what I do, I pulled together some resources for both of us.

How to be an ally to the cause

Showing up at a protest is great. But there are plenty of other things you can do to support this movement, even if going to a crowded space is not something you are willing to during this pandemic.

We all live in a bubble of our own perspective. Don’t assume you know what you’re talking about until you have done some actual research. Start at Black Lives Matter. Then fill your social media feed with the voices of people, organizations, and channels that are taking on these issues: Marc Lamont Hill, Brittany Packnett Cunningham, Check Your Privilege, the NAACP are just a few. Listen.

Donate to a bail fund

Getting arrested is scary. And, for anyone without the cash for bail, it can quickly lead to a prison term, even when no crime was committed. (Protesting is not a crime.) Jail is always a dangerous place but, during this pandemic, it’s really scary. Donating to a bail fund helps people get out of there. The Community Justice Exchange lists the bail funds by state. Or you can donate to the National Bailout or split your donation among over 70 bail funds.

Give to the cause

There are a lot of organizations working on this but enacting social change is difficult and expensive. They all need your help and support. Consider a donation to Reclaim the Block, The Minnesota Freedom Fund, Campaign Zero, The Innocence Project or Black Lives Matter – to name just a few.

Poverty is oppressive. And the history of this country has led to disproportional poverty among the African American community. Only one of every eight Americans is black. But one-fourth of America’s impoverished are black. Support black entrepreneurs with the dollars you spend and you can help change that. Skip Amazon and buy from a black-owned business. BLK + GRN is a market of natural products created by black artisans. Buy from a Black Woman is a directory of black-woman-owned businesses. We Buy Black is like a big-box store where all products come from black-owned businesses.

Now that you are up to speed on the issues, use your voice, and speak up about them. Your local prosecutor, for example, has a lot of influence over how the black community is treated by the justice system where you live. Put eyes on what that person is doing. Ask them where they stand on issues that are important. Start at the Winning Justice Prosecutors directory to learn about the issues and find your local representative.

How to protest yet stay safe

I want my daughter to be as safe as possible when she goes to a protest. Here are some ways she can do that.

It’s still a pandemic. And, while wearing a mask isn’t perfect Covid-19 prevention, it helps. It also might help keep facial recognition software from identifying her, though that’s hardly a sure thing.

Not every protest is peaceful. Not every moment is a safe time to be out. And some protests are being hijacked by miscreants or policed by an unidentified militia. It’s important to remain aware of what’s happening around you. Get real-time alerts to your phone from the Citizen app, make sure someone knows where you are. Maybe even have someone track while you’re out with Life360 or Google Maps so they can find you if you don’t check-in.

Your entire life is on your phone. And you could be arrested for protesting. If you feel the need to bring your phone with you (it can also be a safety tool), protect it. Be sure you know how to lock it so that, if someone takes it or the police want to access your data, it’s difficult to do. Know what buttons to push to lock it instantly. Set a passcode. And turn off biometrics so you can’t easily be forced to unlock it. If it is lost or taken, go online (go here for Apple and here for Android) and lock or brick it immediately. If you want to use an app – to message or film, for example – and lock everything else, turn on Screen Pinning (for Android) or Guided Access (on Apple.)