Customer Question
I got a parakeet...

Veterinarian's Assistant: I'll do all I can to help. Can you tell me a little more about the parakeet's situation?

Veterinarian's Assistant: What environment do you keep the parakeet in? Are there other pets or animals around?

I have them in the living room we’re I can keep an eye out. I have a Guinean pig but the bird can’t see hom

Veterinarian's Assistant: And what's the parakeet's name and age?

Pretty Girl she is about 5 months

Hello, thank you for contacting us at Just Answer. I will do my best to answer your questions and help Pretty Girl. How big is the cage that they are both in? Are they both females?

Ok, does it look like just some squabbling or is your male actually creating wounds? 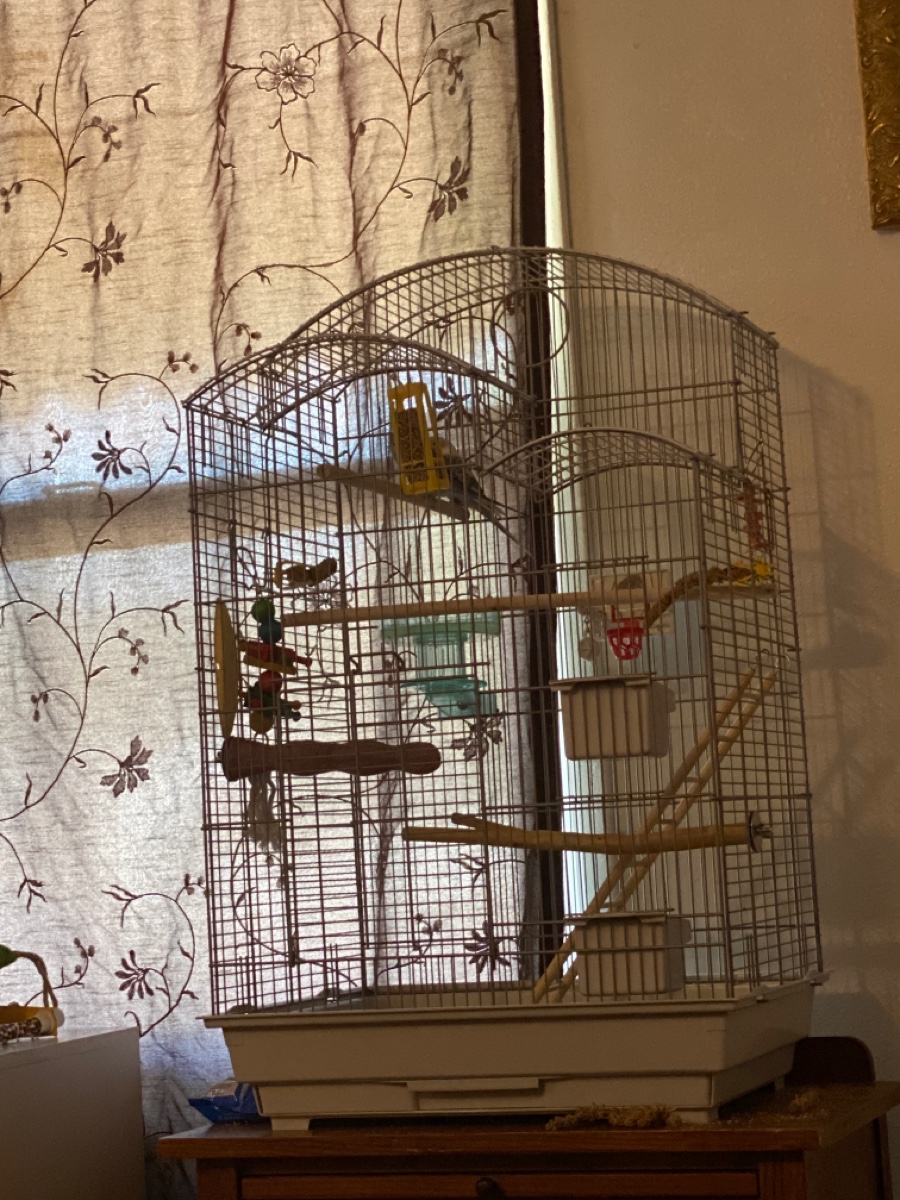 Ok, that looks like a nice cage and set-up. If it just sounds like some squabbling and not loud shrieking, and you are not seeing any wounds, then I think you can try to work this out with the two of them together. It is really important though for you to get a second bowl of food and put it in a different location so that each bird can have a bowl and one is not 'guarding' the food. This will help them both relax and cause less fights. Make sure they have plenty of space to get away from each other, and give them toys to play with. I think with some time and plenty of food, they should adjust to each other and be fine.

Are you able to put food in opposite corners? Or do you have a bigger cage that could give them a little more space? If not, housing them in separate cages but right next to each other would be recommended. It may take them some time to start to like each other and if you have them in their own cages they can feel relaxed and safe, then you can do short visitations until they are getting along.

Ok, I'm glad you are already separating the food and that you have a bigger cage. Give me just a minute to type up a longer response on doing parakeet introductions.

These are recommendations in general for introducing a new parakeet to another:
Although budgies are naturally social, don't ruffle his feathers by putting that new bird into his cage too quickly and intruding on his territory. Gradually introducing the two parakeets is the best way to make them BFFs.

Keep the new parakeet quarantined in a separate area of your house for 30 days to make certain he has no contagious diseases or parasites. Feed the parakeet water and food from his own bowls, and thoroughly clean his cage daily.

Move the parakeets into the same room, but keep them in separate cages. They'll be able to size each other up, but your original parakeet's territory will be protected. Give both parakeets equal amounts of affection. Showing favoritism to the new parakeet could upset your existing bird. Attend to the older bird first to help him remain confident and ward off any feelings of jealousy. Leave the parakeets in separate cages for one week.

Close the doors and windows. Allow the parakeets to fly around the room and enjoy hanging out with each other. This will give them time to bond on their own terms and build trust without feeling intruded upon in their cages. Return the parakeets to their cages if they show signs of any aggression toward each other, such as lunging, squawking, screeching or nipping.

Place the parakeets in one cage that's big enough for both of them, once they've gotten used to each other's presence and they're digging each other's company. Give each bird his own water, food bowl and perches to make sure they don't have anything to squabble over, and they'll know they're equally loved and cared for.

I know that sounds like a long, difficult process that is going to take a lot of work, but it will be completely worth it for them to bond and be buddies with each other.

Chat 1:1 with a bird veterinarianLicensed Experts are available 24/7

Dr. Pat
Veterinarian Avian Health Consultant
Doctoral Degree
3,596 satisfied customers
parakeets: healthy..cage, twichting with wounds on his head, bloody
Six weeks ago my parakeets had 3 live babies... All were born healthy and seemed happy...The other day I noticed the dad pecking at the eldest. When I got home from work yesterday,the baby was at the … read more

Dr. Pat
Veterinarian Avian Health Consultant
Doctoral Degree
3,596 satisfied customers
Show more
Disclaimer: Information in questions answers, and Show More
Disclaimer: Information in questions, answers, and other posts on this site ("Posts") comes from individual users, not JustAnswer; JustAnswer is not responsible for Posts. Posts are for general information, are not intended to substitute for informed professional advice (medical, legal, veterinary, financial, etc.), or to establish a professional-client relationship. The site and services are provided "as is" with no warranty or representations by JustAnswer regarding the qualifications of Experts. To see what credentials have been verified by a third-party service, please click on the "Verified" symbol in some Experts' profiles. JustAnswer is not intended or designed for EMERGENCY questions which should be directed immediately by telephone or in-person to qualified professionals.

35 years in general practice, including avian.

I have been practicing for 10 years. I work with exotic pets, dogs, cats, small ruminants, camelids and pigs.

Over 22 years of experience with pet birds, wildlife, and zoological avian collections.

Mostly experience with chickens and ducks.