I submitted my deposit ( conure, bald spot problem) via

I'm sorry that your question wasn't answered in a timely manner. We don't have many avian vets on this site. The link you provided gives a 404 error. You can use the paperclip icon in the toolbar above your message box (if that icon is visible) or you can have***@******.*** help you. I can be more accurate for you if I can see what you're seeing.

Customer reply replied 6 years ago
OK, I'm using now firefox and the "Access denied" issue seems to be resolved.
Let me go back to the actual question.
I found a large-wound-like bald spot on my sun conure wing. there is also little one like like that on the leg.
They don't appear to be physical damage.
Please see pictures I took and let me know if those are satisfactory or you need larger scale.
https://www.dropbox.com/sh/n4puvoi1esp4uef/AABKjlVuxvsS3iSBebJsXK0Ua
(I verified the link is working, just make sure it is not broken into two parts during the message transfer)The link has 13 images, I'm attaching 3 of those to this message just in case.
Please let me know if I can provide any more useful info.
Thank you for looking into the issue,
David 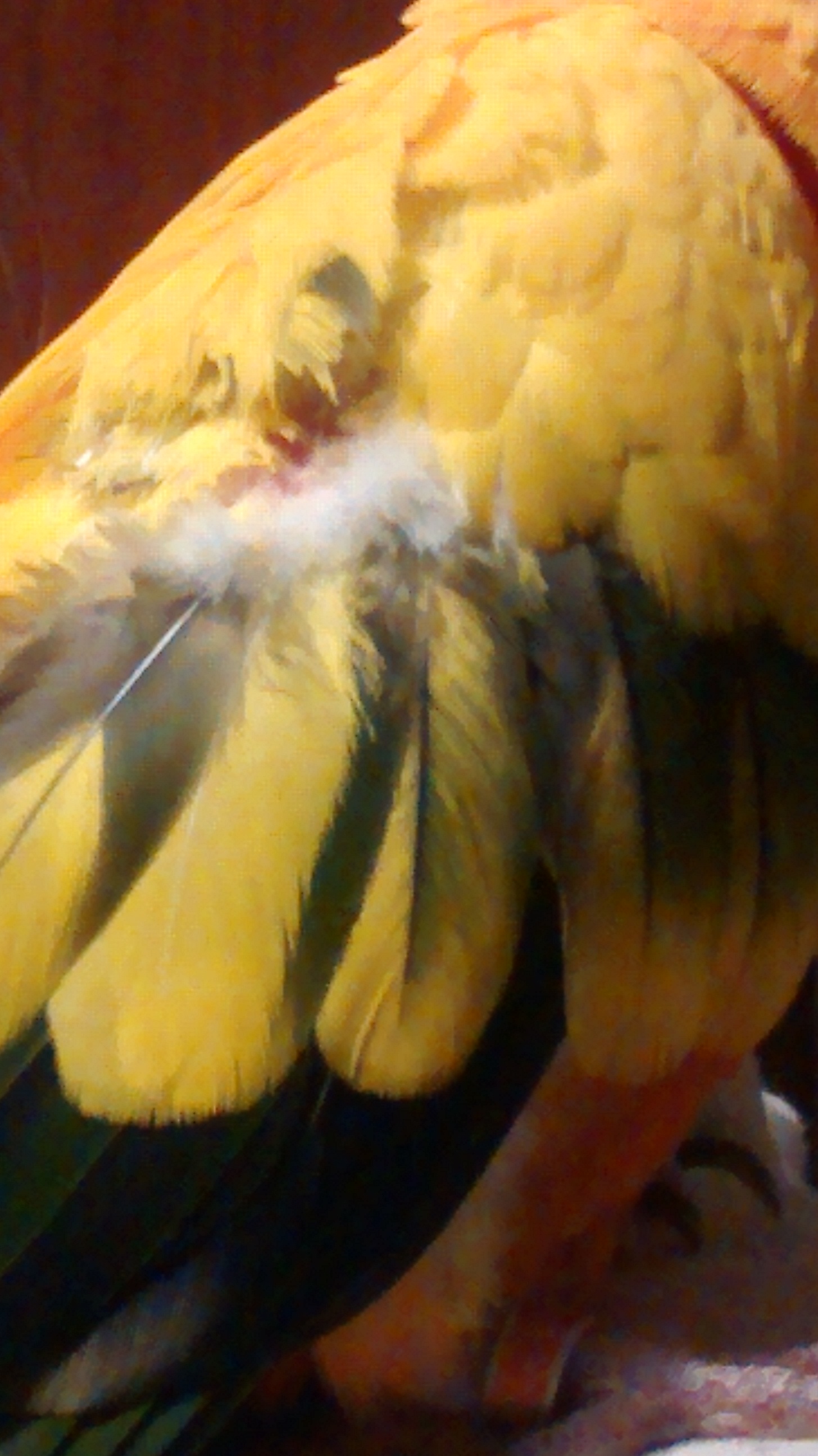 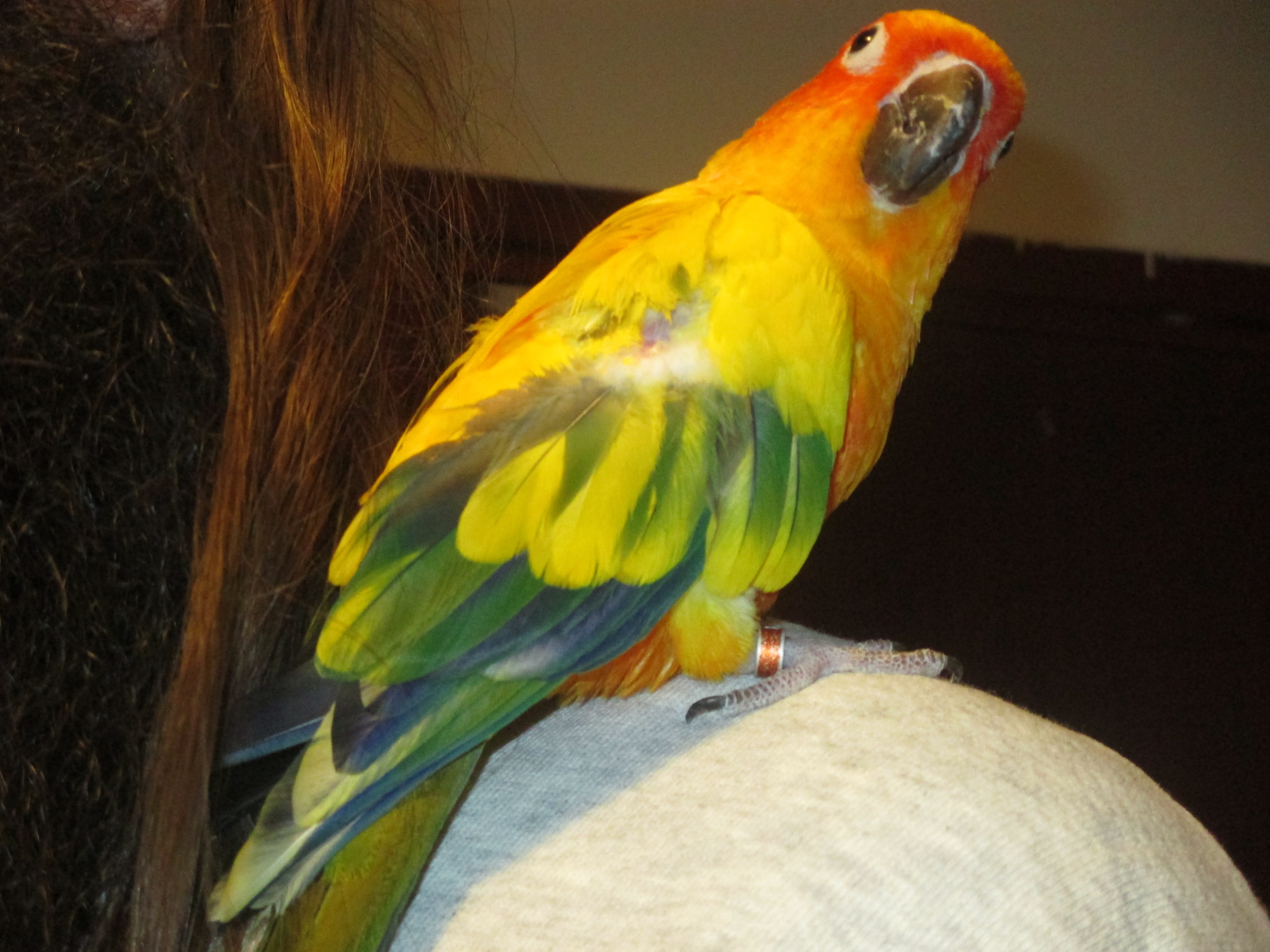 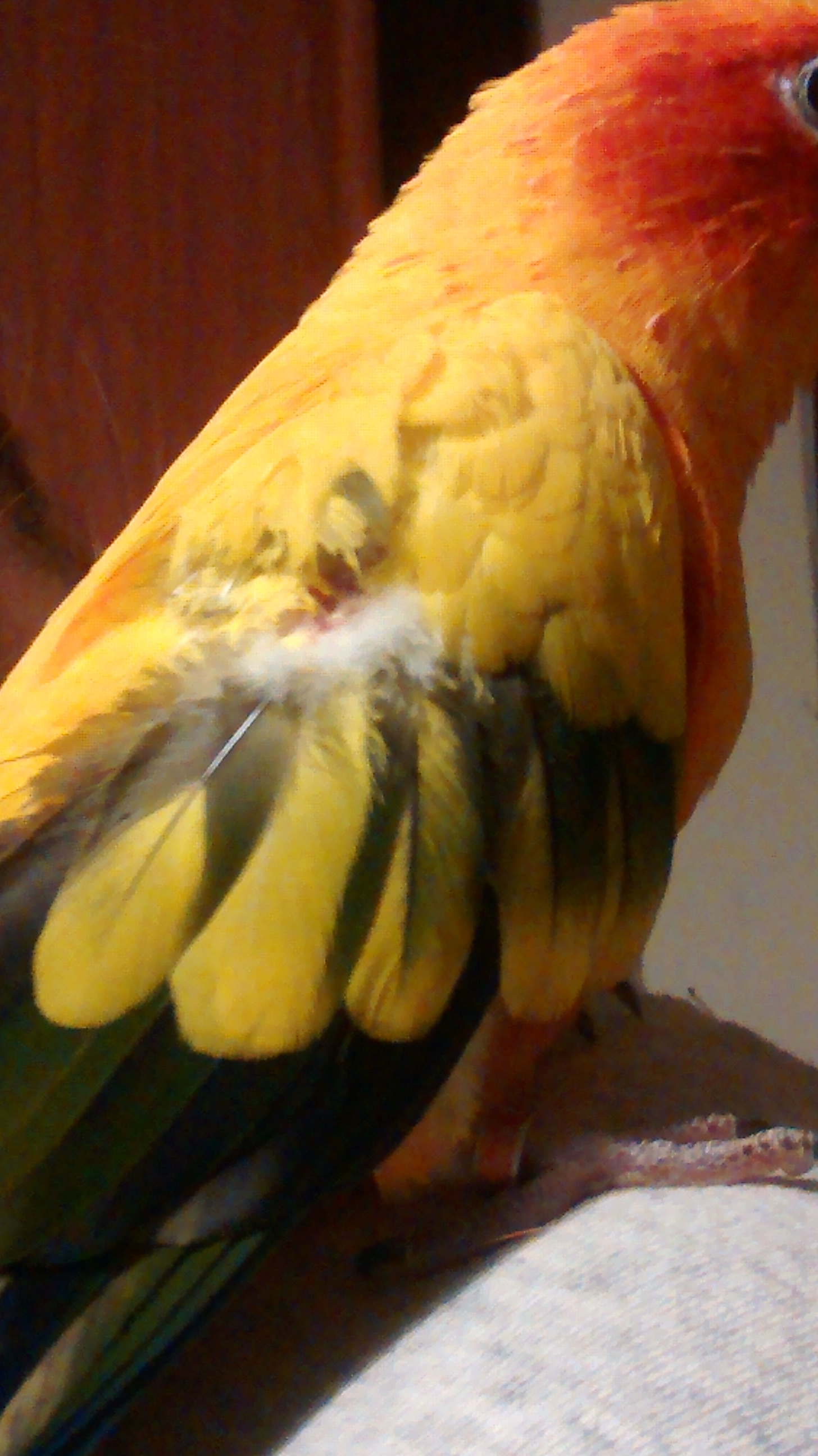 Thank you! Have you seen that incredibly cute bird annoying those areas? I can't see the one on the leg but the one on the wing is very suspcious of a feather plucking bird.

Customer reply replied 6 years ago
Not specifically those places... How can we positively determine if it is feather plucking bird condition?

You'll need to directly visualize the behavior. It can be occult - occurring only in the dead of night. I'm going to post my synopsis of this behavior for you but do your best to confirm if plucking is indeed occurring...

The etiology of feather picking/chewing/self-mutilation can be a challenge to determine particularly if you don't have an avian-oriented vet (please see here: www.aav.org) available where you live. Both medical and behavioral causes exist.

Birds usually chew the breast feathers and areas under the wing and around the legs but any pattern can present. Feathers on the head remain unless a molt or medical disorder is present. Medical disorders include viral infections such as psittacine beak and feather disease or polyomavirus, bacterial folliculitis, dermal parasites, yeast infection, and topical irritants need to be considered as well. Rarely do birds feather pick due to external parasites. Less commonly, infection with the protozoan parasite Giardia spp. will cause picking of the feathers over the ventral (lower) abdomen and heavy metal ingestion such as zinc can cause a feather-picking toxicosis due to chewing on zinc-plated cages. Anecdotal reports suggest that a unilateral (one-sided) pattern of picking may indicate a disease process under the area of picking such as ovarian or renal disorders.

There are many rule-outs for behavioral feather picking including improper socialization when raised by humans resulting in phobic birds or those with obsessive-compulsive disorders - which should be a consideration when this behavior is preceded by a molt. A traumatic event can cause a bird to become nervous and pick; anecdotal examples abound such as witnessing an attack by a hawk outside the window at a bird feeder, the owner leaving for vacation, a change in the color of the cage, a nervous owner, and the death of a mate or owner. Some birds improve in a new home with a new owner for unknown reasons.

Here's where an avian-oriented vet will be necessary...

All possible medical causes for a bird's feather picking are evaluated first; then if no medical cause is found, behavioral causes are explored or presumptively treated with psychotherapeutic drugs such as clomipramine which would need to be prescribed by a vet. A complete blood count and biochemical profile, blood lead and serum zinc test (Louisiana Veterinary Medical Diagnostic Laboratory can run this test on just 0.1ml of blood and serum), X-rays, psittacine beak and feather disease test, and fecal ova and parasite exam and fecal ELISA test for Giardia spp., if necessary, are performed along with a feather follicle biopsy and culture. Consider the introduction of toxins into Kivi's environment as well - the great majority of which can’t be tested for.

General and presumptive treatment includes removing any stressors, improving Kivi's diet and restoring what he perceives as a normal environment. Consider clomipramine which works well in true obsessive-compulsive disorders. Distracting him with toys and a "sweater" over the area may help but be sure that he can also engage in normal and necessary preening behavior. A collar isn't recommended as it doesn't allow him to engage in normal preening behavior, normal feeding behavior, and normal movement. A collar should only be used if he's in imminent danger of hurting himself (self-mutilation). Finally, many birds normalize once their molt is complete and so simply "watchful waiting" may be appropriate at that time.

Please respond with further questions or concerns if you wish.

Verified
Dr. Michael Salkin and 87 other Bird Veterinary Specialists are ready to help you
Ask your own question now
Customer reply replied 6 years ago
Thank you :)

You're quite welcome. Thank you for your kind accept. I appreciate it.

I can't set a follow up in this venue and so would appreciate your returning to our conversation with an update at your convenience.

Chat 1:1 with a bird veterinarianLicensed Experts are available 24/7

Dr. Dan
Veterinarian and practice owner
Doctoral Degree
8,877 satisfied customers
Show more
Disclaimer: Information in questions answers, and Show Less
Disclaimer: Information in questions, answers, and other posts on this site ("Posts") comes from individual users, not JustAnswer; JustAnswer is not responsible for Posts. Posts are for general information, are not intended to substitute for informed professional advice (medical, legal, veterinary, financial, etc.), or to establish a professional-client relationship. The site and services are provided "as is" with no warranty or representations by JustAnswer regarding the qualifications of Experts. To see what credentials have been verified by a third-party service, please click on the "Verified" symbol in some Experts' profiles. JustAnswer is not intended or designed for EMERGENCY questions which should be directed immediately by telephone or in-person to qualified professionals.

35 years in general practice, including avian.

I have been practicing for 10 years. I work with exotic pets, dogs, cats, small ruminants, camelids and pigs.

Over 22 years of experience with pet birds, wildlife, and zoological avian collections.

Mostly experience with chickens and ducks.