Talouse letrec print or lithograph. No there is neither. Do…

Expert's Assistant: What would you like to learn about the lithograph? Is there any info on the back, or a certificate of authenticity?

No there is neither

Expert's Assistant: The Appraiser can help. You can also send photos once I've connected you. Do you know how old the lithograph is? What condition is it in?

Do not know the age, condition is good

Answered in 6 hours by:
Appraiser: Natalia-mod,  replied 6 months ago

Hello, My name is ***** ***** I’m a moderator for this topic! My goal is to help you get the best out of JustAnswer. Experts are much more likely to answer your question quickly if they can see pictures of your items. Please attach pictures using the information here: https://www.justanswer.com/help/how-do-i-send-photo-or-file-expert Thank you for your help and patience, Natalia - Moderator

Greetings, welcome to JustAnswer, my name is ***** ***** I will be happy to help you with your appraisal questions.

If you wouldn't mind sending an image of the work including detail shots of any signatures or markings that would be really helpful. Please post photos by clicking on the blue document icon next to the red send button or clicking on the paperclip icon above the text box. Also, would it be possible to include dimensions (height x width)?

Once I receive the images, I will conduct some research and get back to you as soon as possible. Many thanks!

Please note: I do not participate in the phone call service, this is an automated offer by JustAnswer. I will continue to correspond via written messages such as this one. 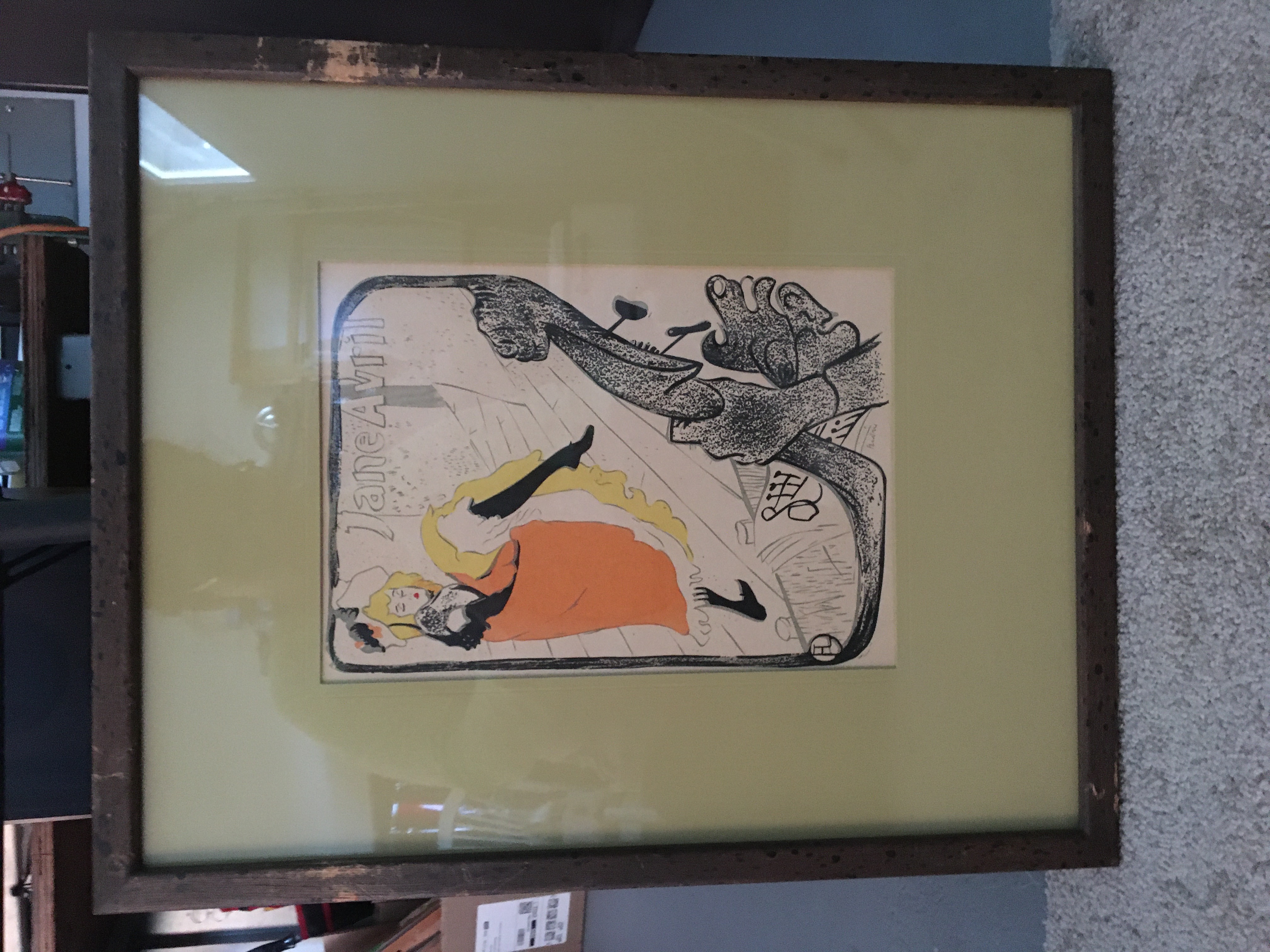 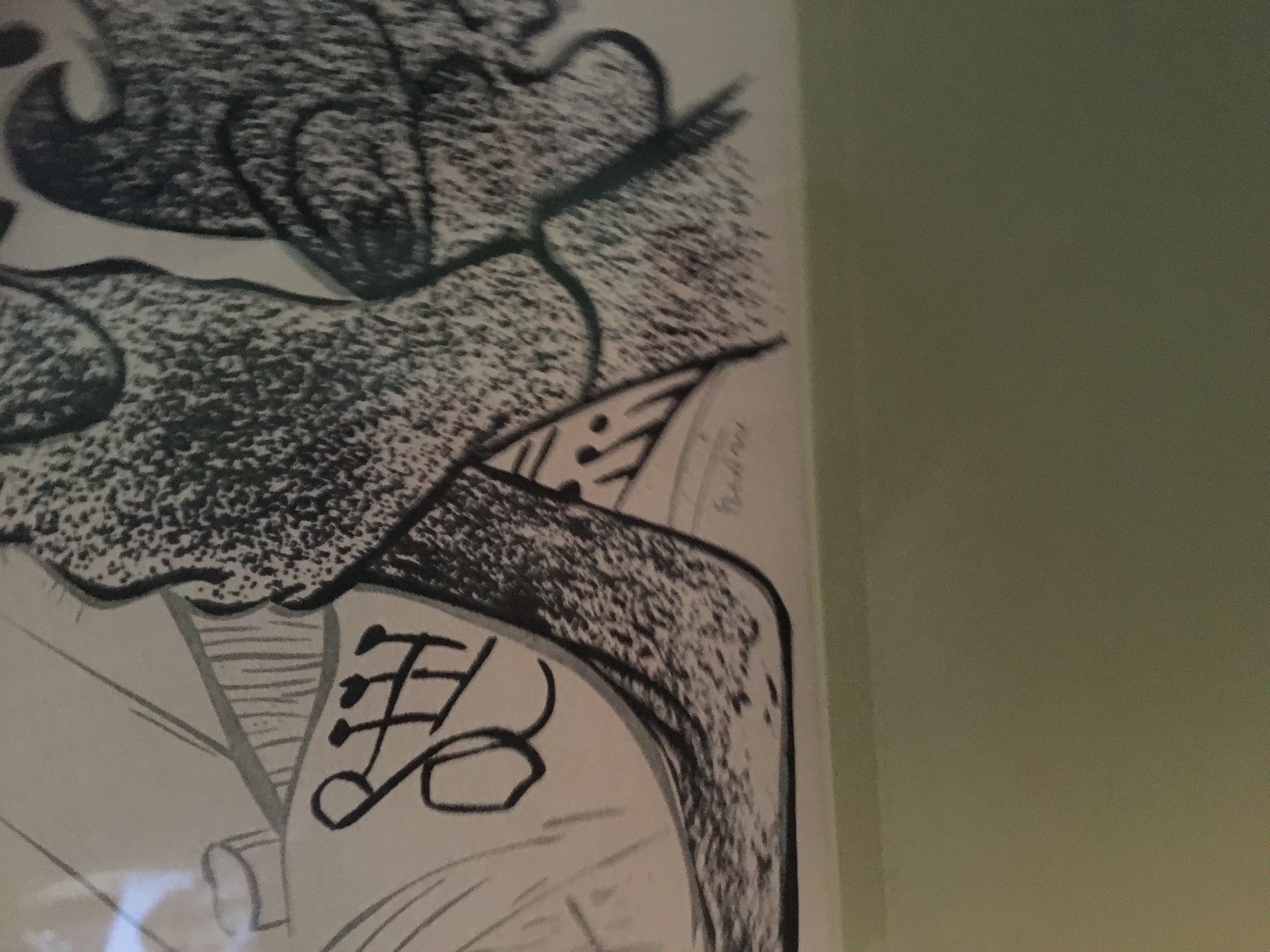 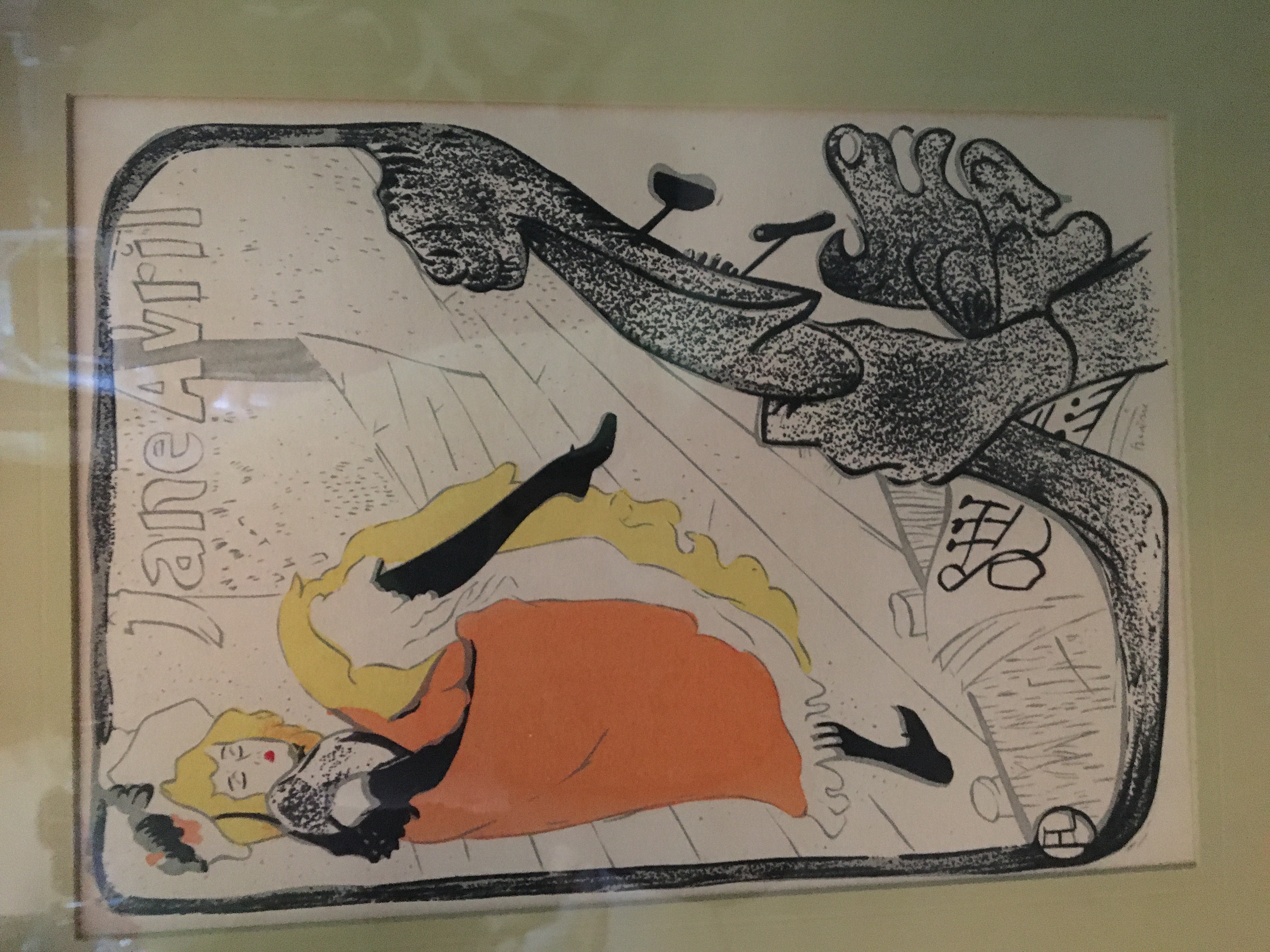 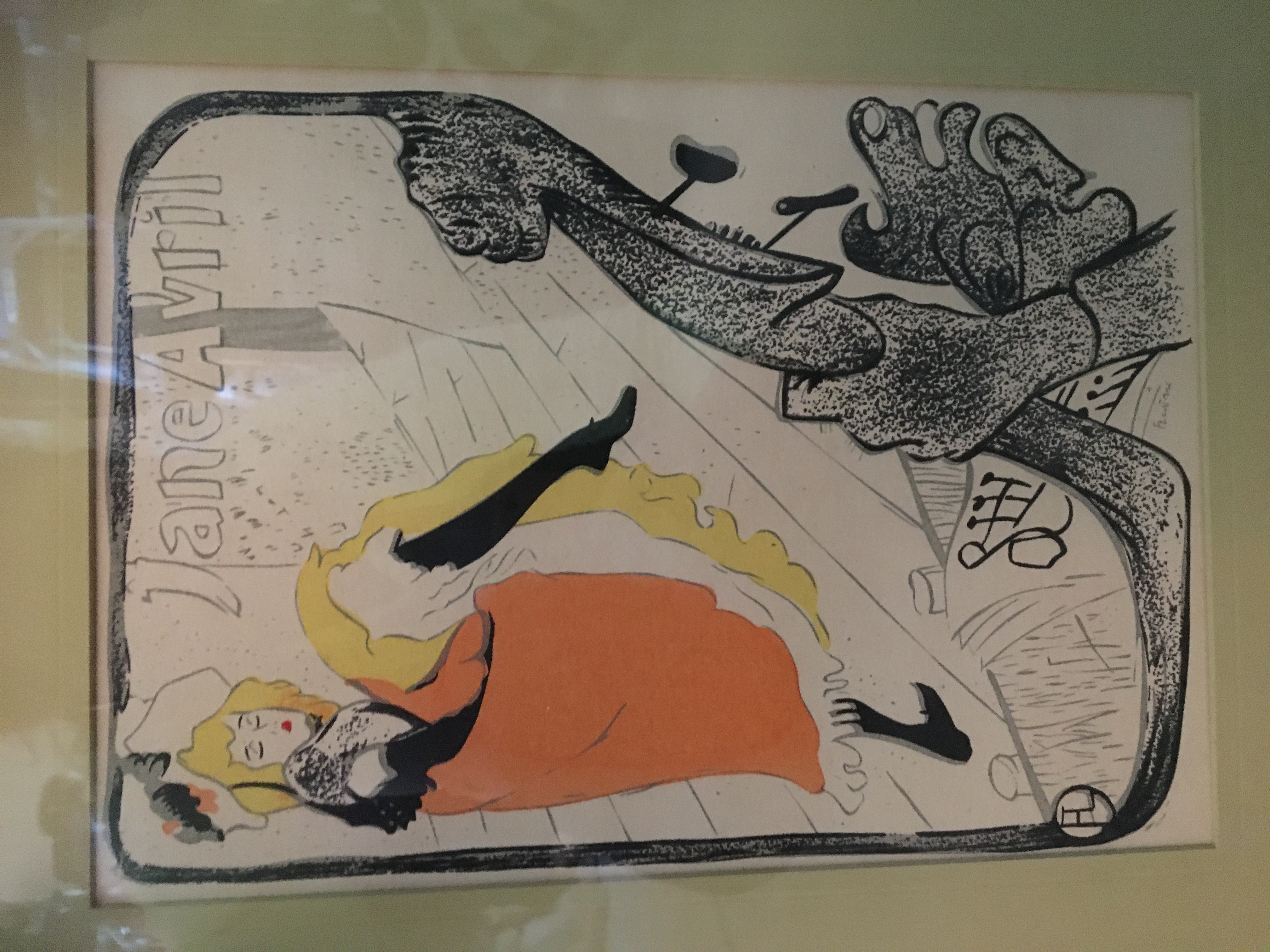 Thank you for sending images along, I will take a look now and get back to you soon.

Hi again, thank you for your patience.

Since I am not able to fully answer your question, I will opt out and allow another appraiser to work with you.

Hello, thanks again for contacting justanswer.com. I have taken over this question for Jessica. My name is ***** ***** I am your art expert.

Henri Henri De Toulouse-Lautrec (b. France, 1864-1901) was one of France's most prominent Post-Impressionist painters. "Toulouse-Lautrec moved to Paris in 1882 in order to learn from artists by working with them in their studios. He was especially impressed with Impressionist painter and sculptor Edgar Degas. Lautrec's subjects were primarily the bohemian world of Montmartre, the city's quarter where he lived and the area that had a mix that included starving' artists, actors, actresses, singers and dancers such as La Goulue who created the Can Can and performed at the Moulin Rouge. It was also the location of racetracks, dancehalls and many bars and brothels, likely the places where he, a frequent visitor, got the syphilis that along with excessive alcohol consumption added to his health problems and caused his death. He partied and sketched the nightlife, and in the daytime, converted his sketches into paintings and lithographs." (via askart.com)

Jean Avril was one of the stars of the Moulin Rouge in the 1890s. This image depicts her in the middle of the can can at the Jardin de Paris and it is credited as the work that launched her career. Your work does appear to be a lithograph (based on the photos you sent) but it does not appear to be from one of the original editions. The definitive state is from the edition on wove paper and measures 15.6 X 11.4. There is also a small state on Japan paper. These two small prints were, of course, taken from the larger, 1893 poster of the same title and issued as plate 110 (of 256) in the series Le Maîtres de l’Affiche. It has a blindstamp of the program (Lugt 1777c) in the sheet lower right. Published by Jules Chéret; printed at Impremiere Chaix (Atelier Chéret), Paris.

When comparing your lithograph to the known example, we can see a number of difference. Most noticeably is the lack of depth and detail in the hand, arm and instrument in the right foreground. Also, in the center of the work at the bottom you will see a mark that looks like a cursive "L". The shape of this mark is different on your version than on any of the other versions I could find as it has an area on the left which is flat instead of round. Finally, the size is not consistent with what we would expect from a work from the authorized edition. I have included an image comparison so that you can easily look back and forth. It is attached to this message in a pdf format.

As I am sure you've found, there are numerous reprints of this famous work and based on the information I have on hand, I believe that is what yours is. The paper it is printed on appears to be of higher quality and for that reason it would likely have a little more value than a poster but the value is nominal. I hope this answer is helpful to you.

If you found this information helpful, if you would be so kind as to leave me a positive review I would appreciate it.

Thank you for contacting us. We hope to hear from you again in the future.

Verified
ChristianT1127 and 87 other Appraisals Specialists are ready to help you
Ask your own question now
Was this answer helpful?
Yes
No

Will
Executive Director
Bachelor's Degree
440 satisfied customers
Show more
Disclaimer: Information in questions answers, and Show More
Disclaimer: Information in questions, answers, and other posts on this site ("Posts") comes from individual users, not JustAnswer; JustAnswer is not responsible for Posts. Posts are for general information, are not intended to substitute for informed professional advice (medical, legal, veterinary, financial, etc.), or to establish a professional-client relationship. The site and services are provided "as is" with no warranty or representations by JustAnswer regarding the qualifications of Experts. To see what credentials have been verified by a third-party service, please click on the "Verified" symbol in some Experts' profiles. JustAnswer is not intended or designed for EMERGENCY questions which should be directed immediately by telephone or in-person to qualified professionals.