For Robert S: hi! I...
For Robert S: hi! I found a 6.5” green glazed jar that I can’t wait to show you. It’s ringed, etched and bumpy all over. It has an old Chinese look and feel to me but I’ve been wrong on that point a few dozen times already this year alone. Thanks for your help!
Show More
Show Less
Ask Your Own Appraisals Question 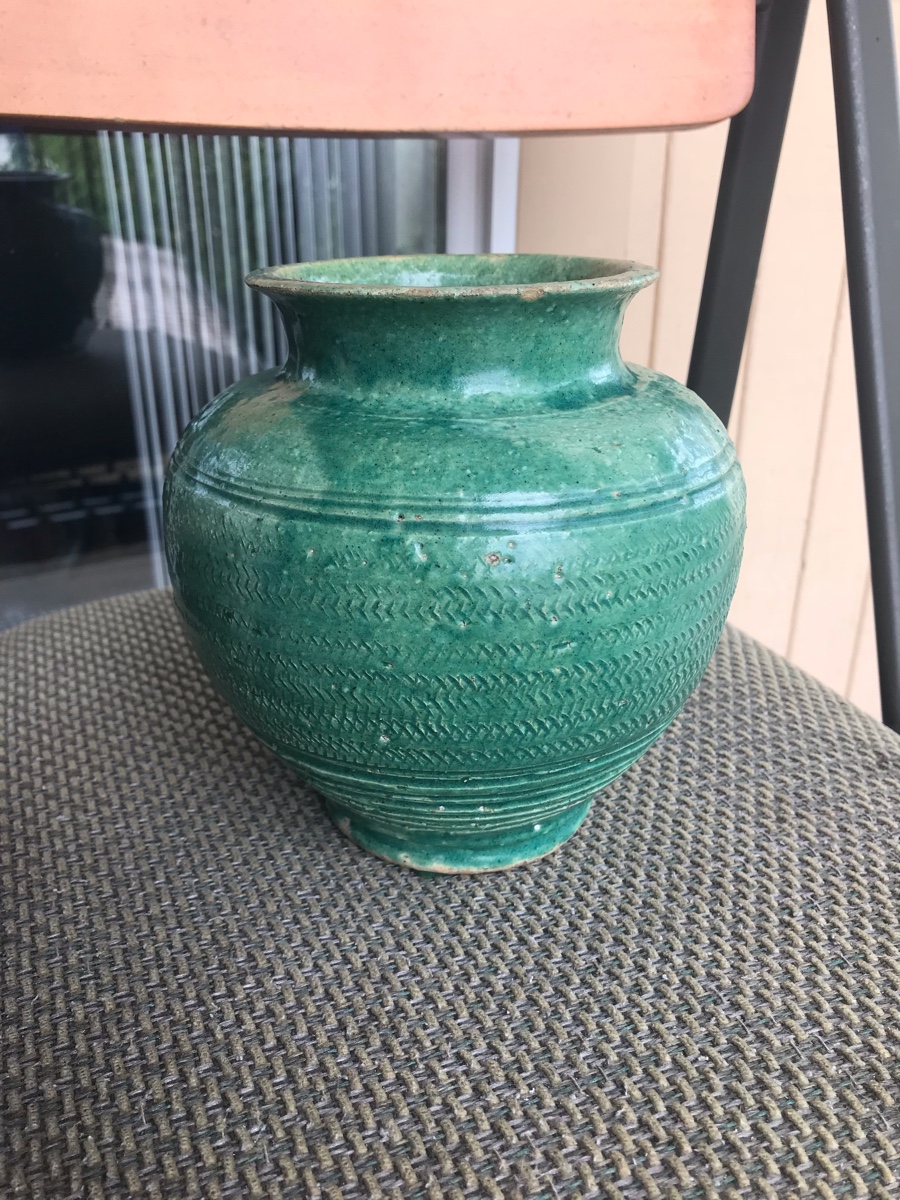 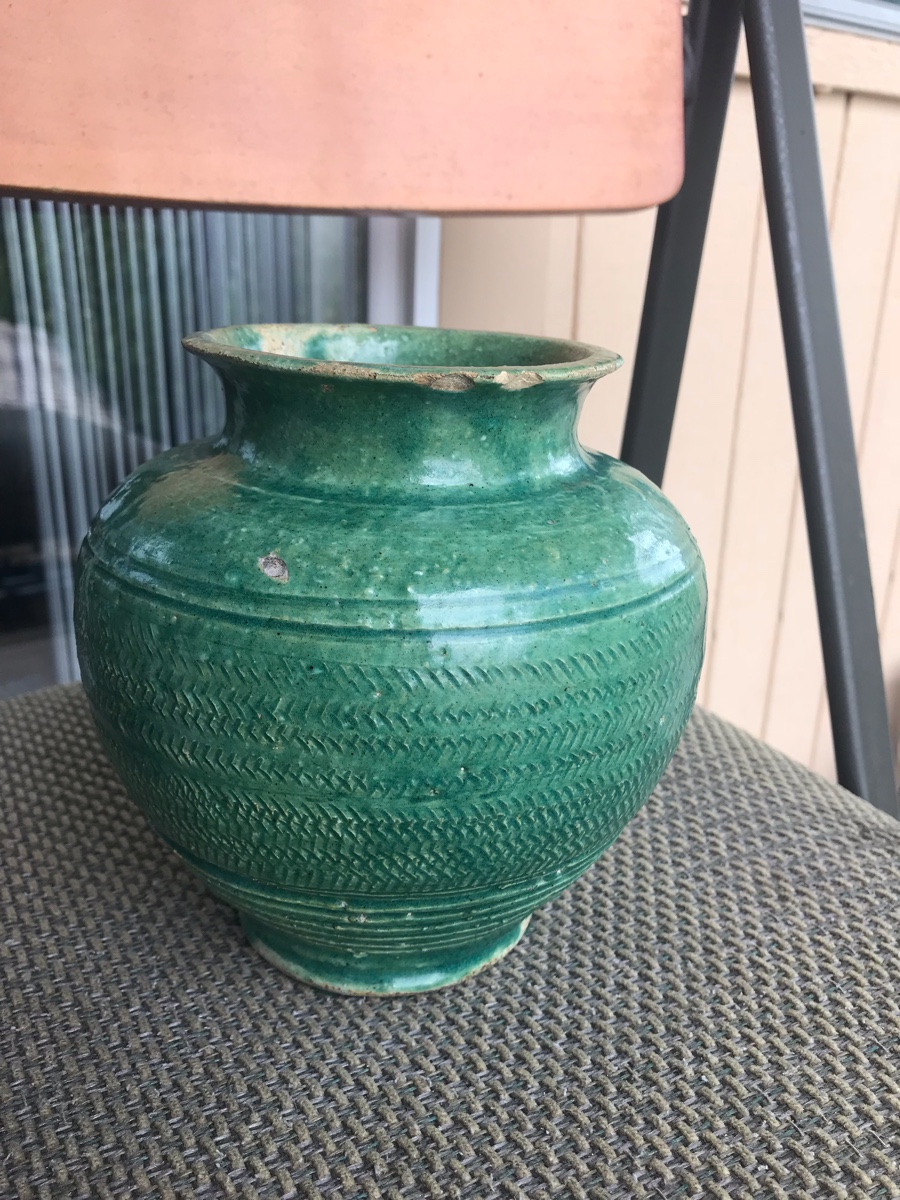 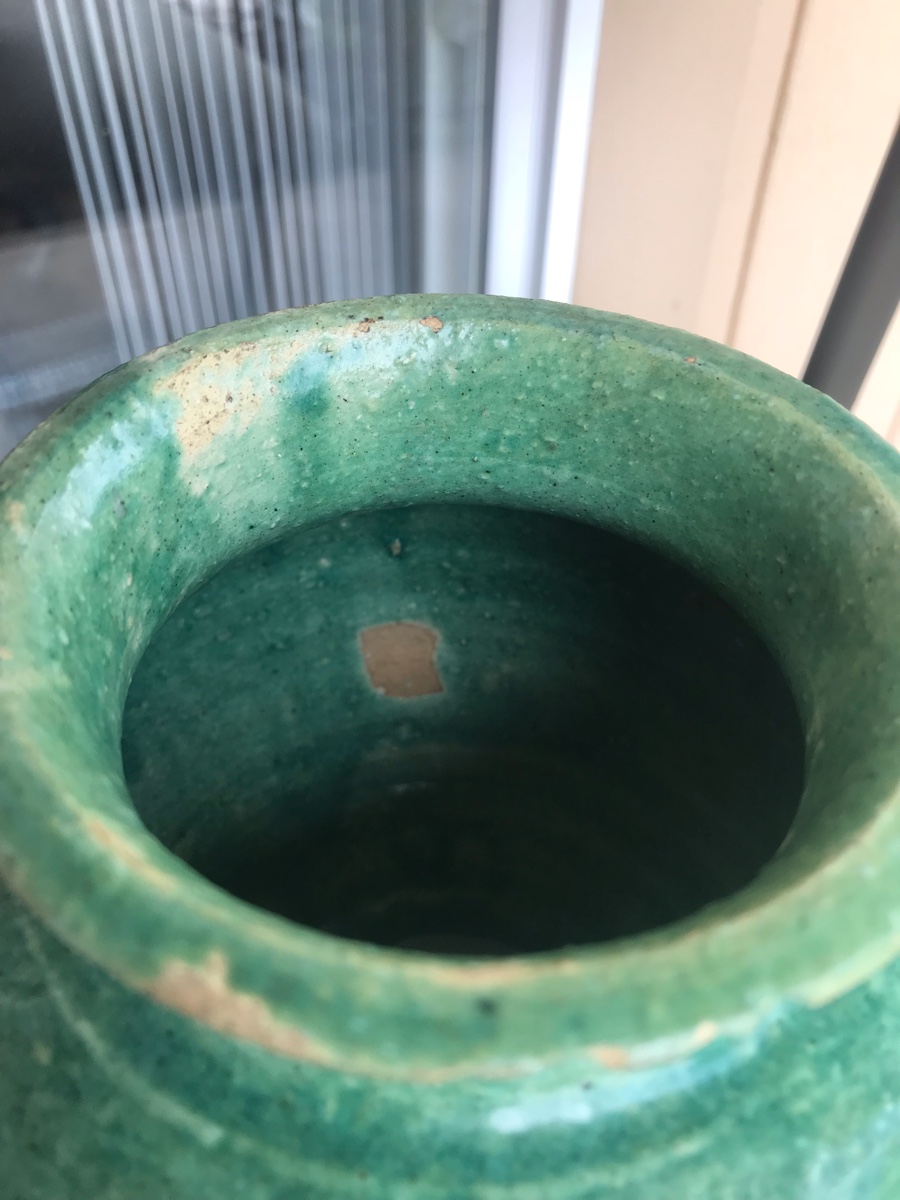 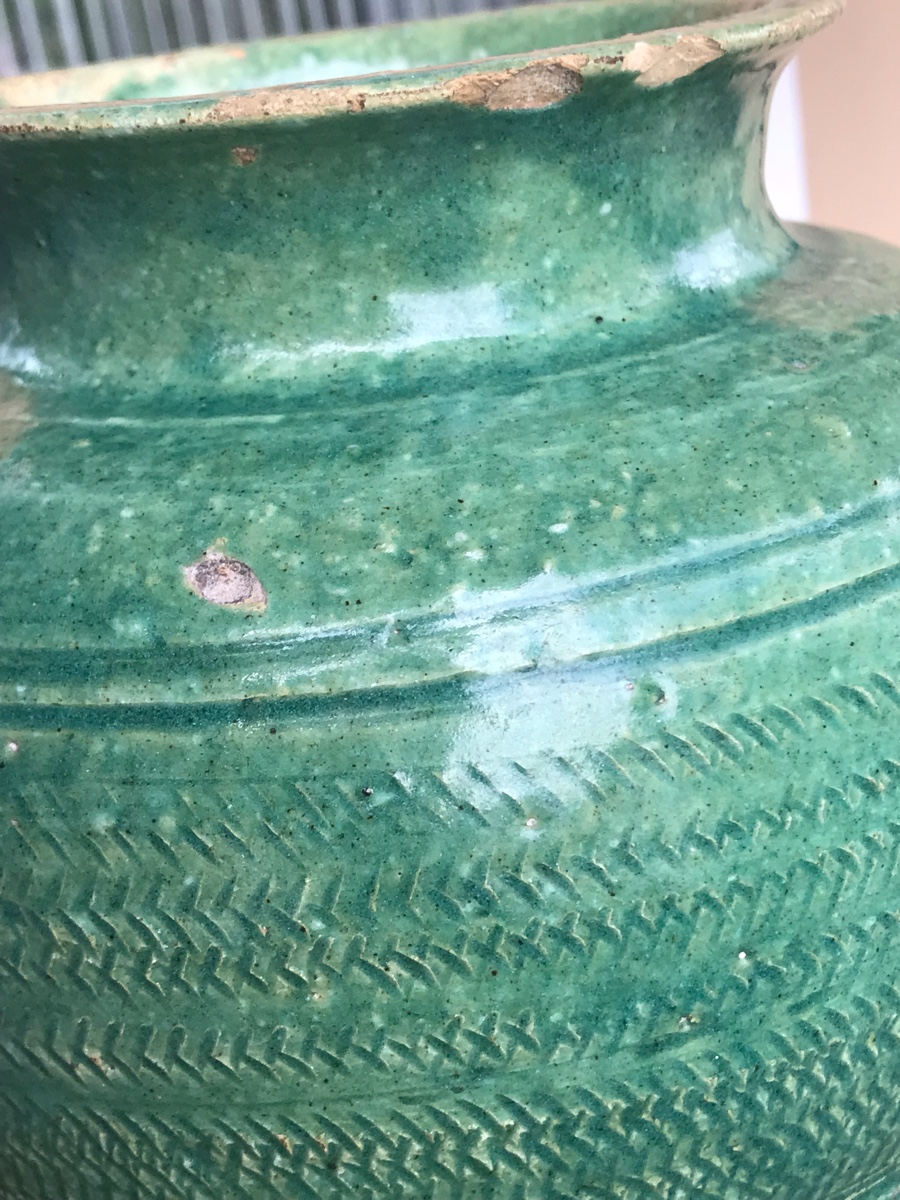 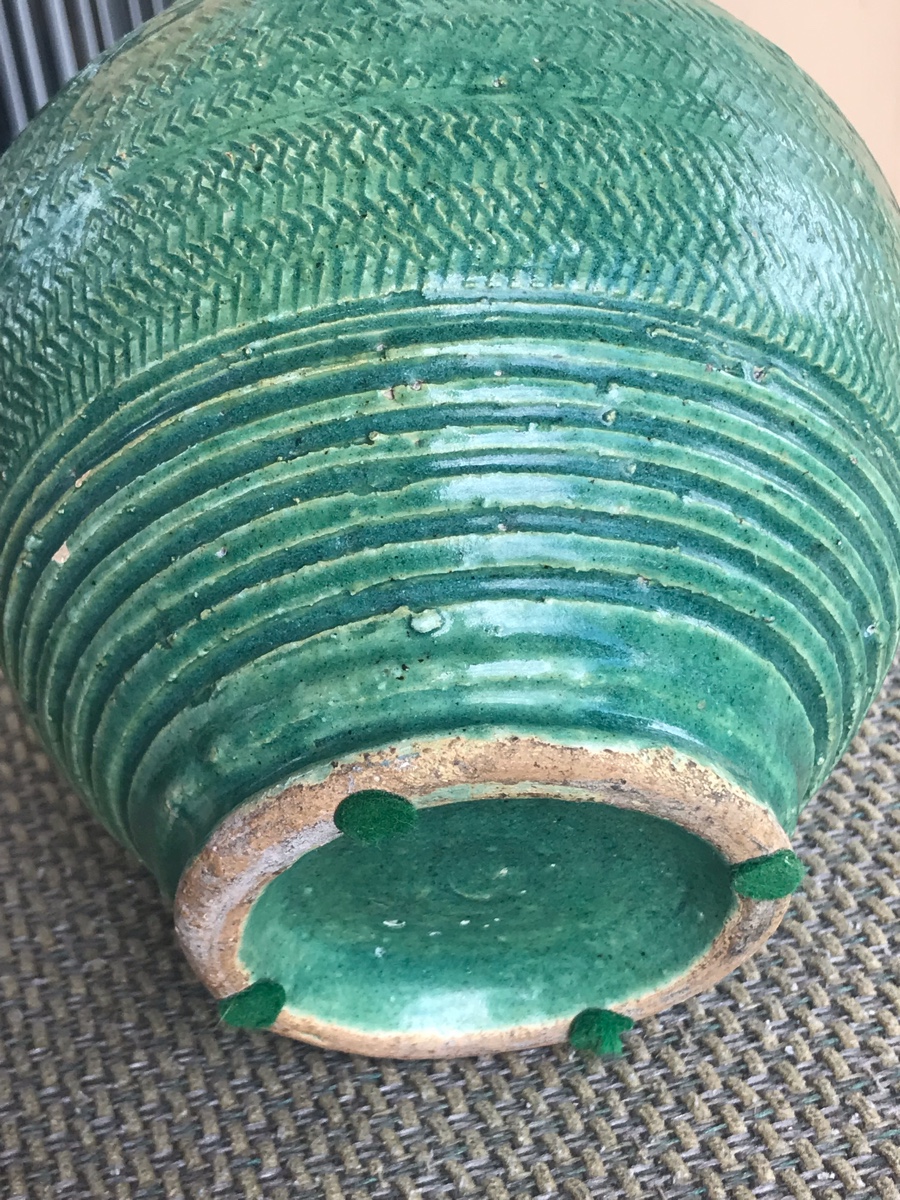 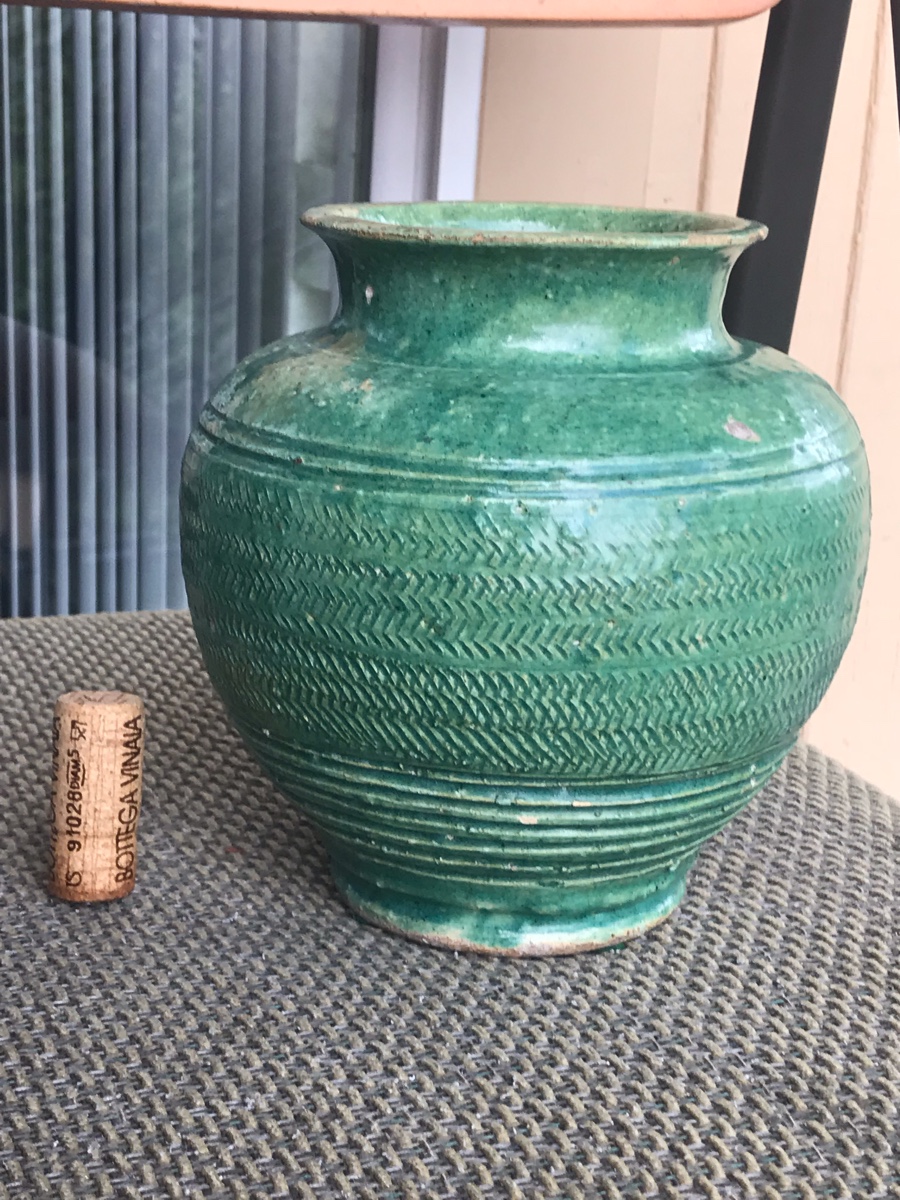 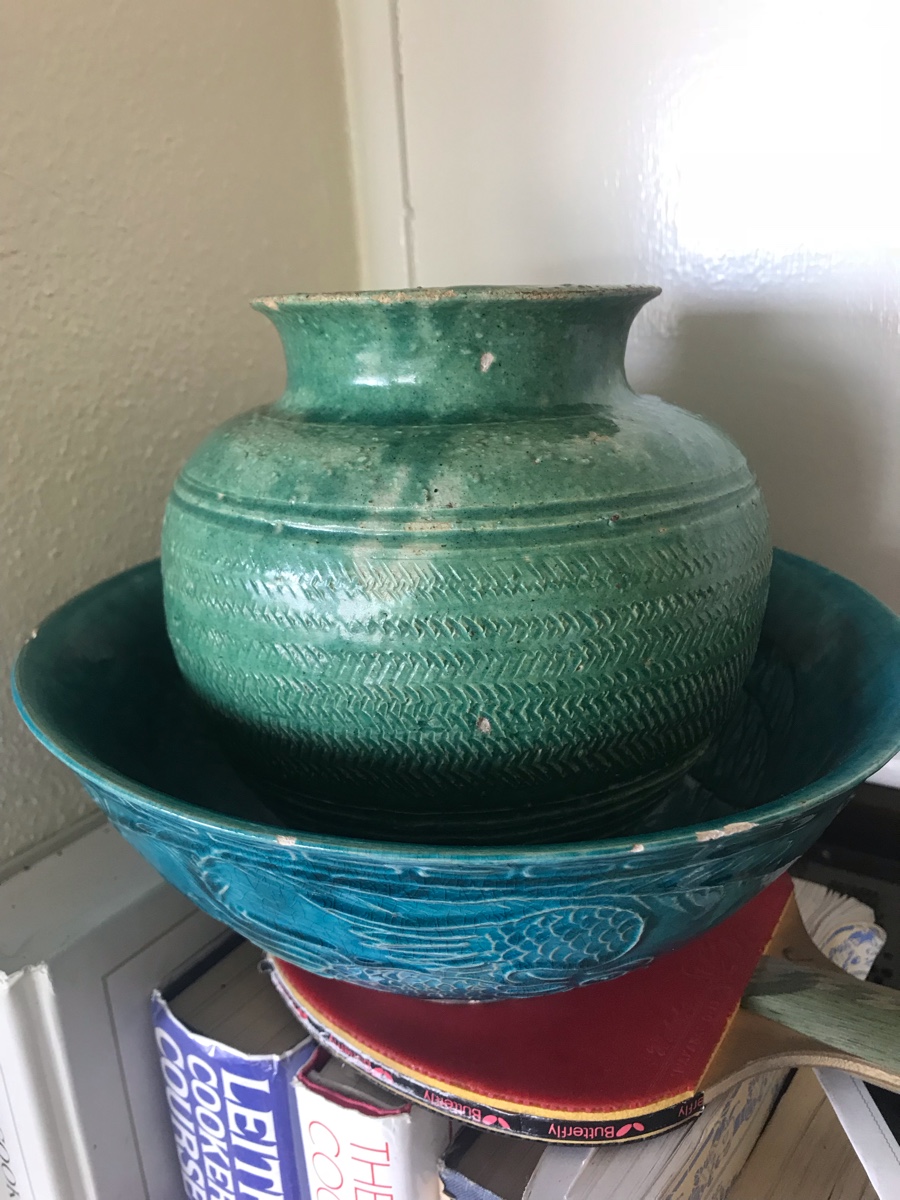 Just letting you know I got your latest find, the pretty green glazed jar.

I'll have an answer for you as soon as pos.

Customer reply replied 1 year ago
Thanks! Not sure it matters but the photos I sent are not quite color true. This new one is more color accurate, with quite a lighter-appearing green as well as faded beige areas. 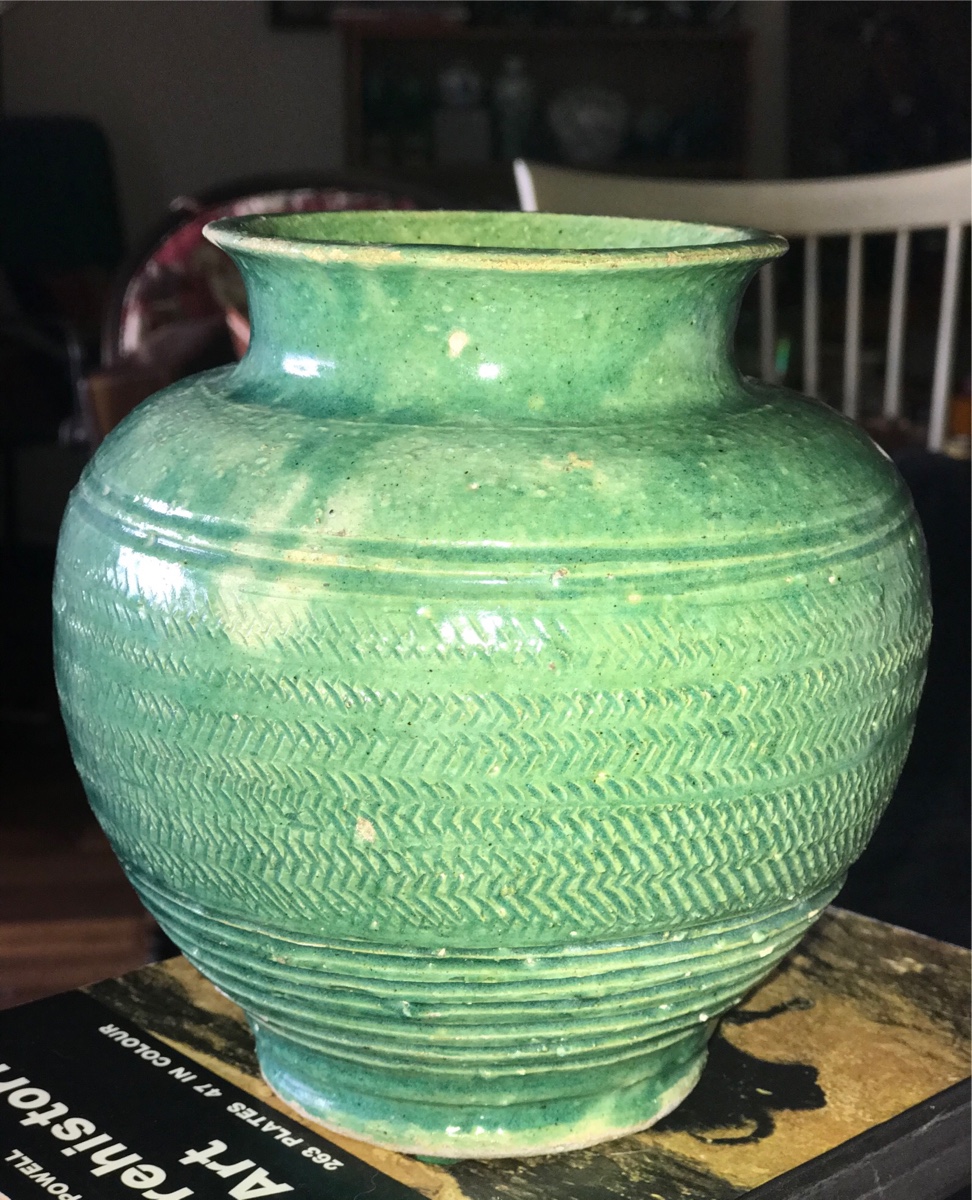 On first glance this looks like a variety of earthenware pottery from Indonesia, and Java in particular, called gentong ware where this green glaze and incised decoration is very similar, but there are several differences, mainly the fact that the base is glazed and the rim is everted not thickened.

It's also similar to some of the glazes on martabans -traditional Chinese earthenware vessels used for transport and storage- but again the only similarity is the glaze.

Shiwan pottery from the Pearl River Delta in Guangdong province, China, also has an identical green glaze, but the form and incised decoration is unlike any in the Shiwan oeuvre.

Looking West to Europe, this particular incised decoration, which is called rouletting, (it's done with a small fired clay, or metal, wheel embossed with the pattern) we see on Bulgarian vernacular earthenware, but the fineness of the potting around the rim and the glazed base is atypical. The same is true of the northern Italian and southern French olive jars. Again, the same green glaze and clay body, but the form is not right.

Neither is it Mexican, or Persian, or African, or Northern Indian, or Vietnamese, all of which use rouletting on vernacular ware, but not like quite like this. So you've stumped the chump with this one, and it really could just be a one-of-a-kind example of individual folk art pottery.

It's certainly old, but not ancient. It has to be from the era when this distinctive green glaze was created -a combination of copper oxide and lead oxide. Invented by the bucket chemists of the Tang Dynasty appearing around 700 AD and pottery decorated with it became known as sancai or "three color ware" as there were typically only three colors, brown, yellow and this mint green.

Also, the fact that the bottom is glazed is an indication of it being vintage rather than ancient. The practice of immersing and wiping the footrim is a practice from the industrial age, as opposed to the more ancient method of dipping, that is, immersion to the foot but no further, leaving the base entirely unglazed. So my estimation is that it's no older than early 20th century.

As for value, it's a decorative thing and would certainly persuade a bidder or two to part with $30 - $50 for it on line.

Hope this helps! And at least you know what it's not!

Verified
Robert S. and 87 other Appraisals Specialists are ready to help you
Ask your own question now
Customer reply replied 1 year ago
Thank you, ***** *****'m gratified to know even the form and techniques you've described, rouletting in particular as well as the history and manifestations of green glazed pottery. And it's pretty! Thanks again. dThe glazed bottom was also what I observed as the biggest "problem."

Thanks! It's always fun to put together the jigsaw puzzle of clues that a piece of pottery throws up, it's just not quite so much fun to end up with that last piece missing: the actual maker. But you're so right, it should not affect ones enjoyment and appreciation of it any the less.

Have a wonderful day!

100% satisfaction guaranteeGet all the answers you need
Share this conversation
Related Appraisals Questions
S. Only I have a Ming (1628-1644) Stoneware Vase with lid.
For Robert S. Only I have a Ming Chung Ching (1628-1644) Stoneware Vase with lid. The vase is 11” tall and 14” with lid. It weights 7lbs. 9 ounces with lid. This is what I was told. There is a small c… read more