Good day Ms. Diana F...
Good day Ms. Diana F. # items today: Dolphin statue, Wall Plaque and Antique Chinese Cellaret. The first is a bronze statue of 2 dolphins. The size is 13 1/2 inches tall x 17 inches long x 8 inches wide. It is marked but I cannot make out signature or stamp...good luck! the second one is a 36 inch in diameter copper or tin (painted copper finish) wall plaque. The third is an antique Chinese cellaret? At least that is what the auctioneer said. It needs some touching up where there is some black enamel paint missing. The inner tin sleeve is removable. in my little research said that it was used for salt? Anyway good luck. Gary
Show More
Show Less
Ask Your Own Appraisals Question 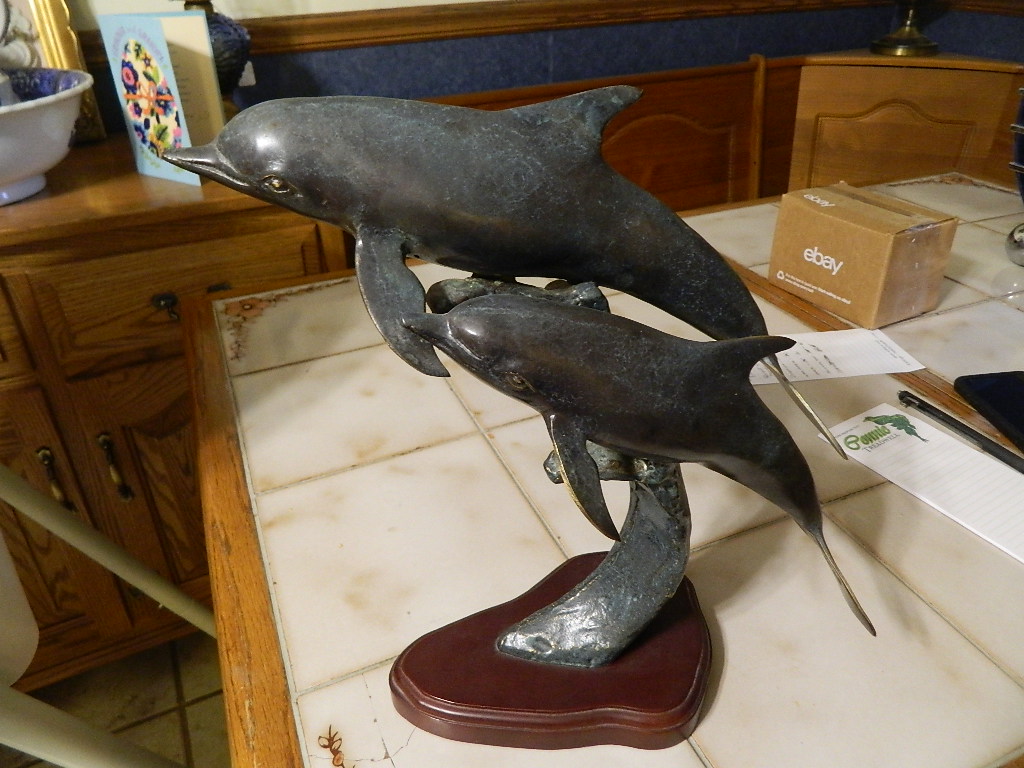 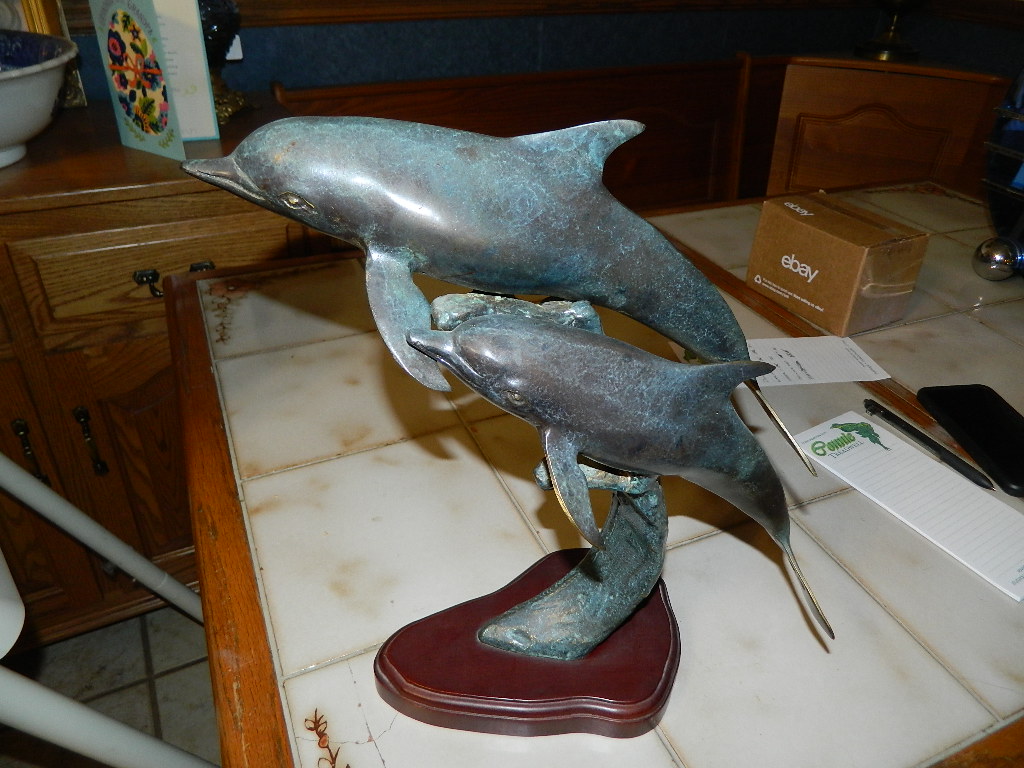 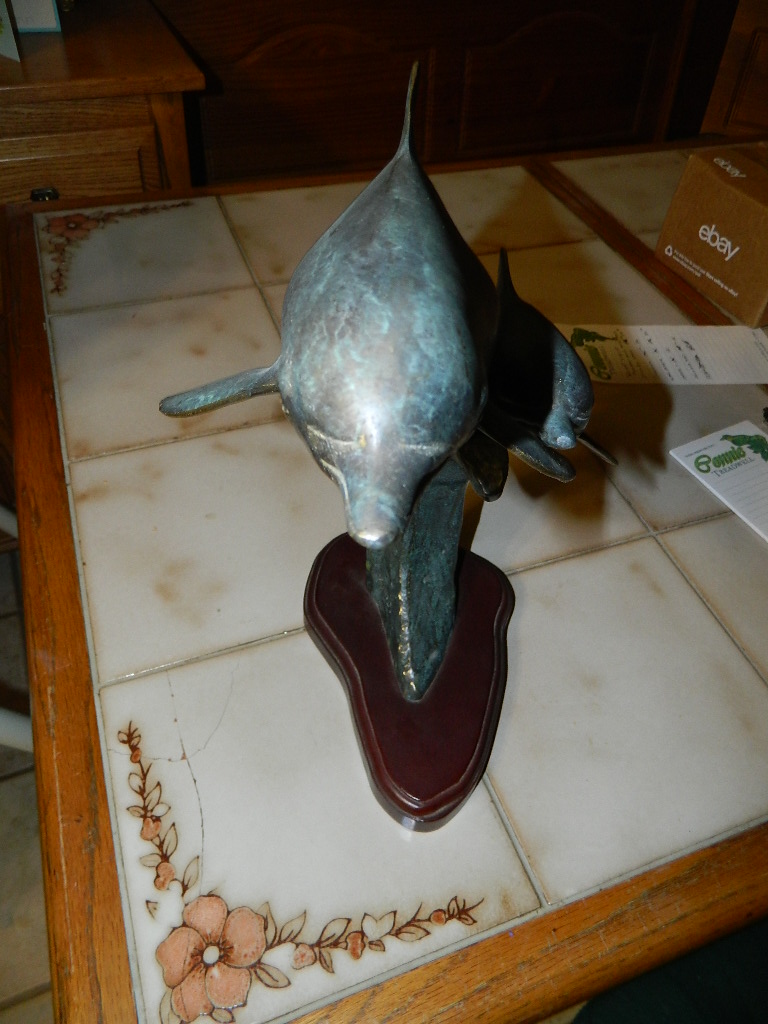 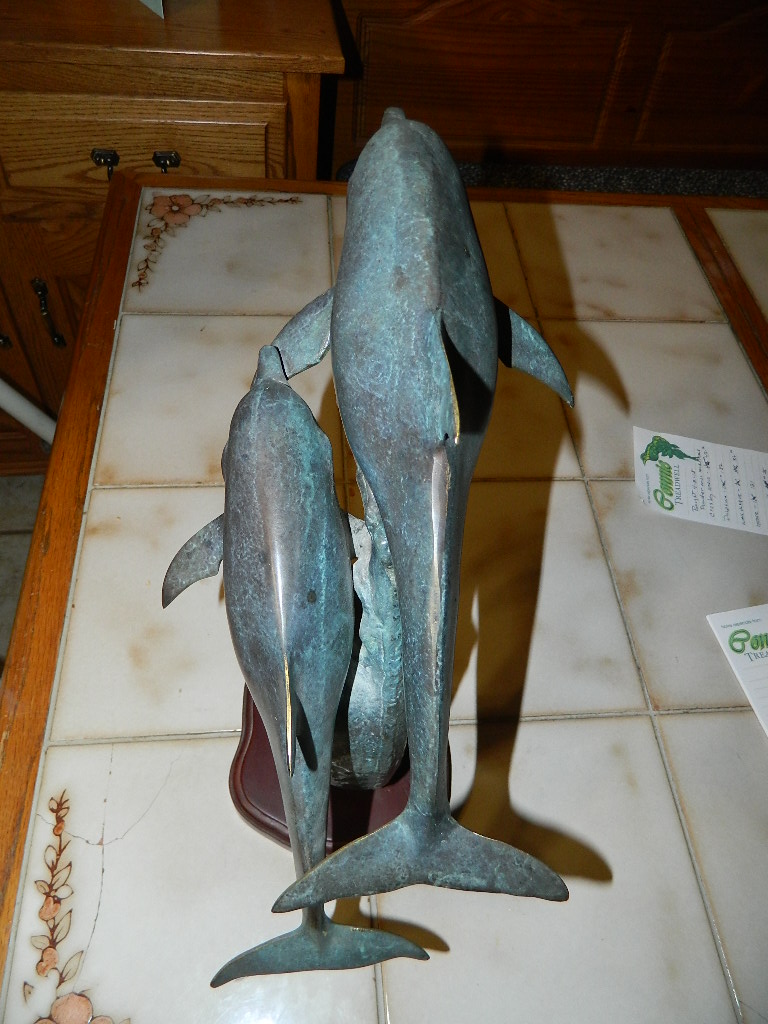 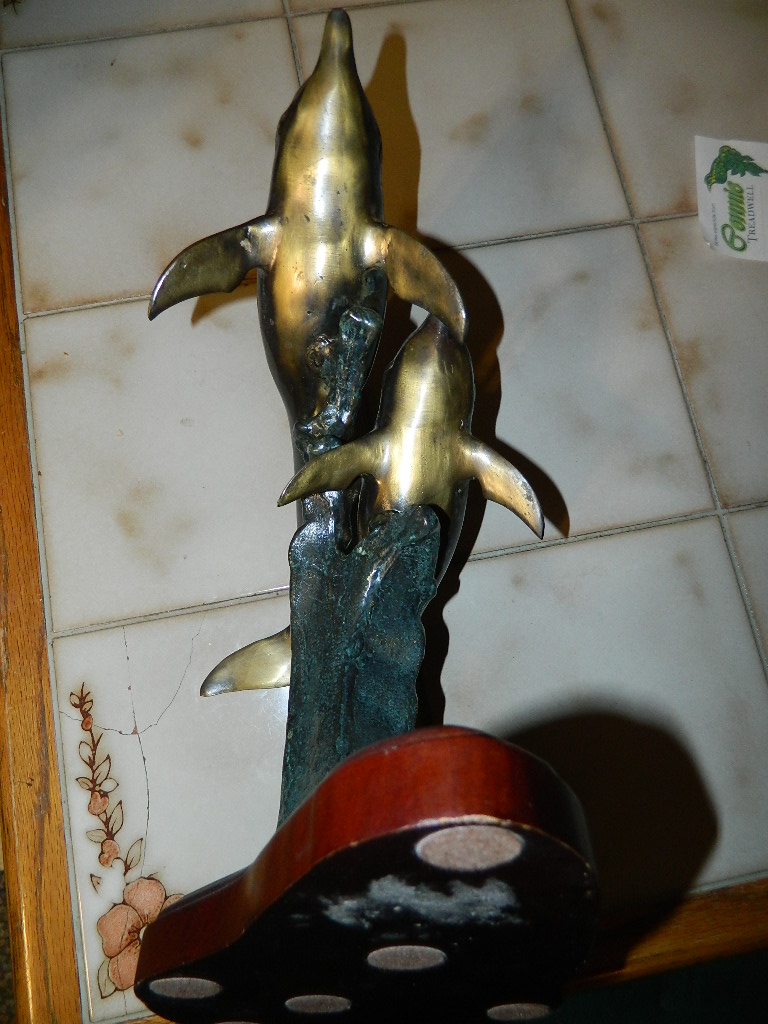 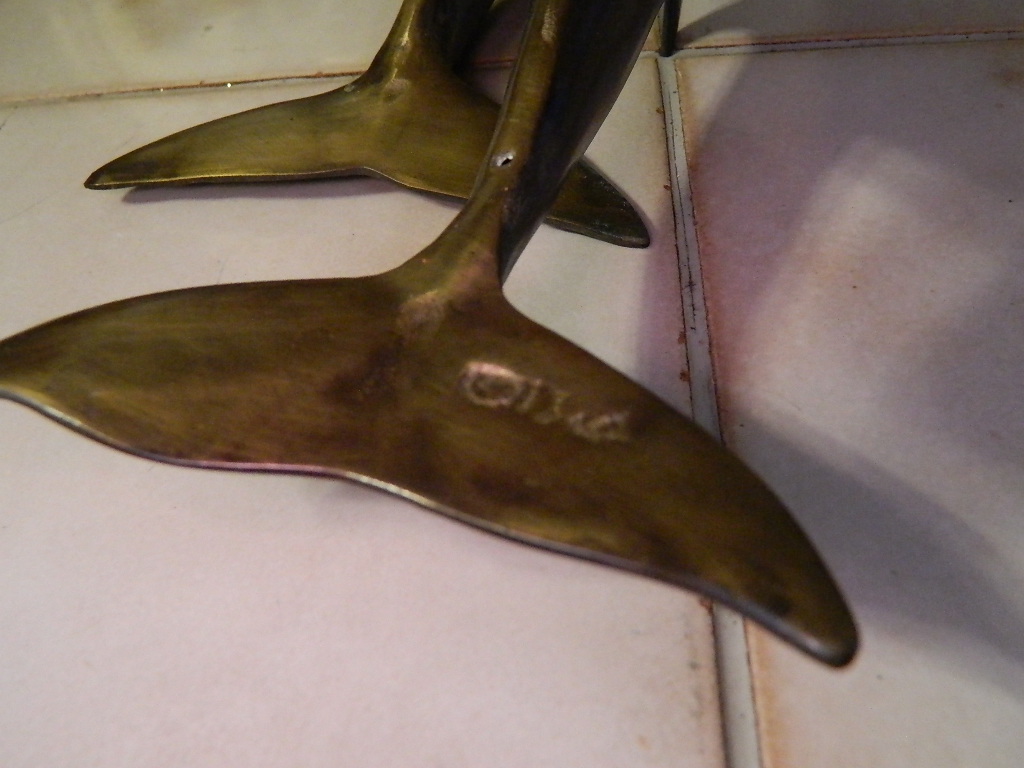 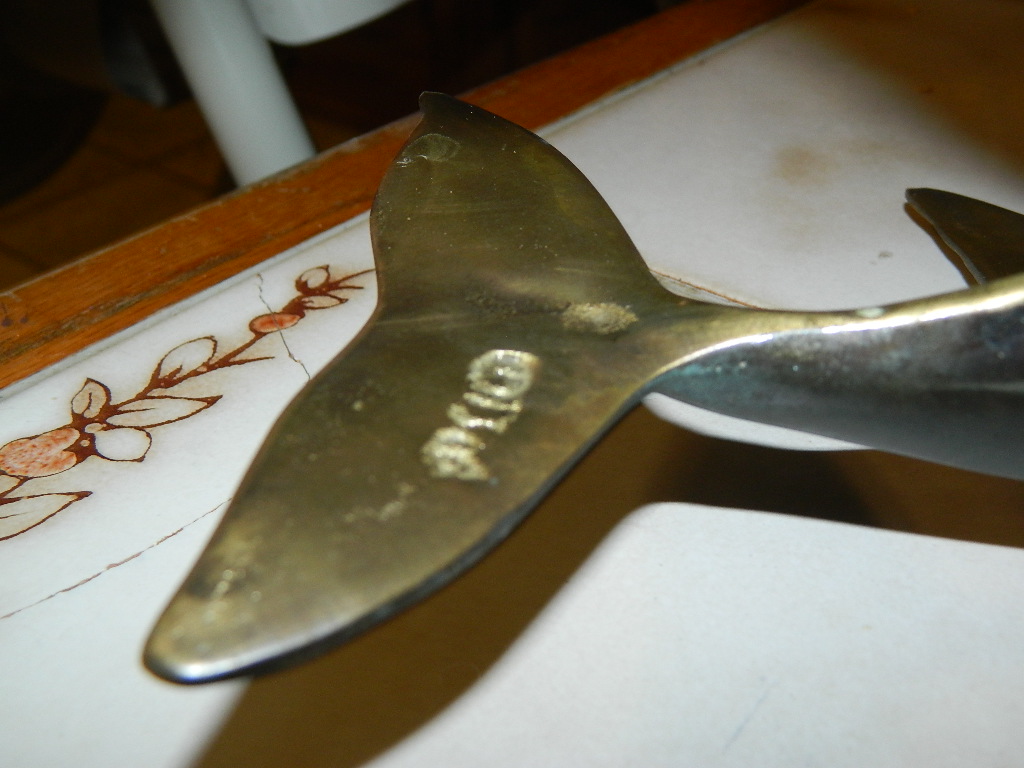 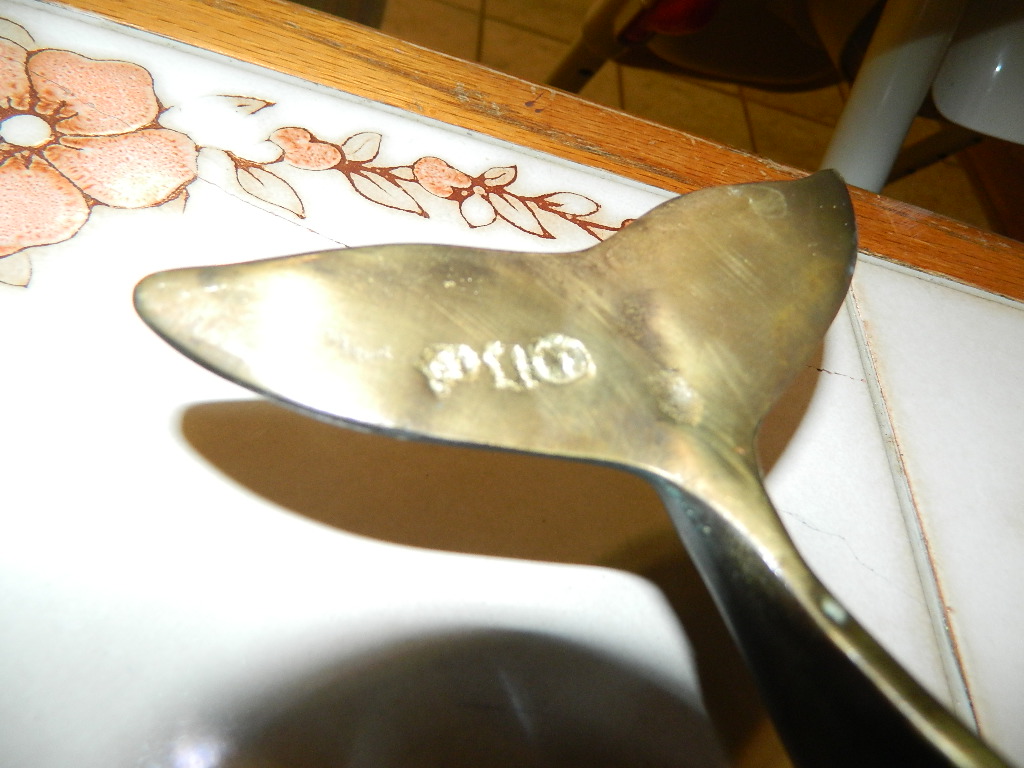 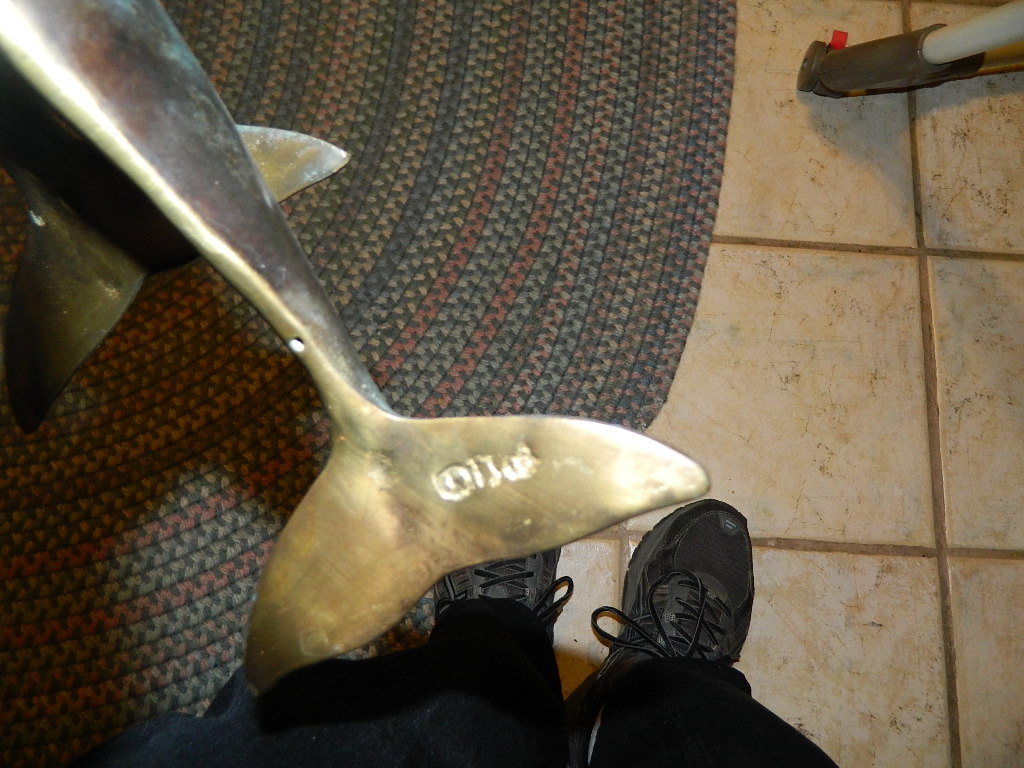 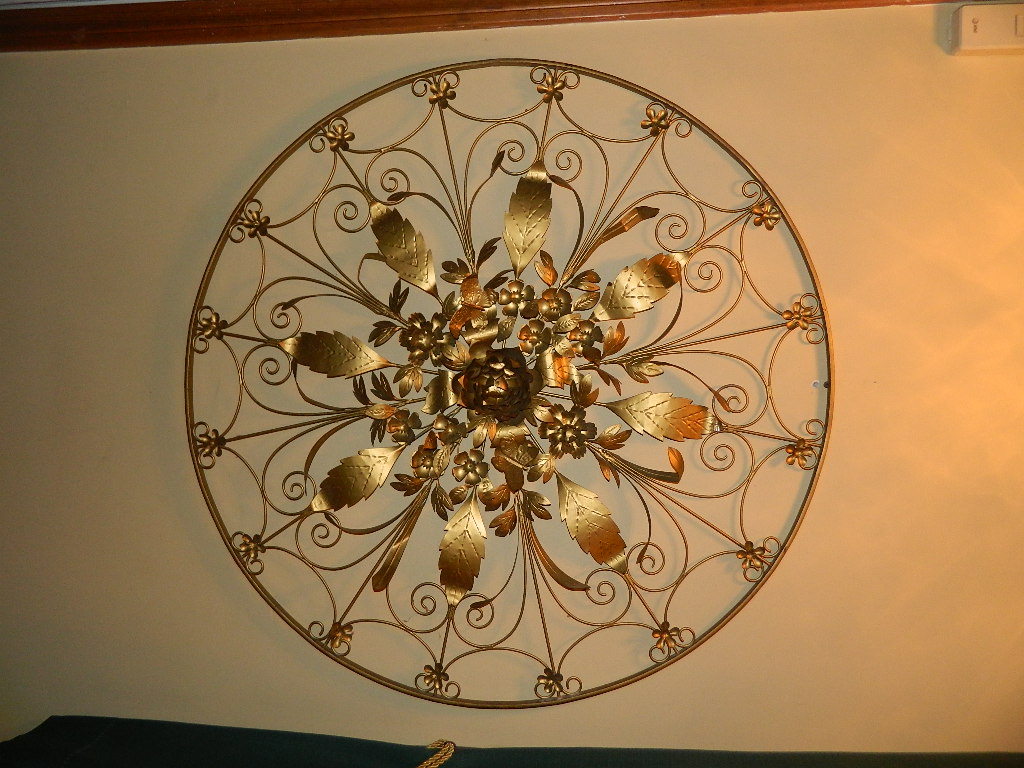 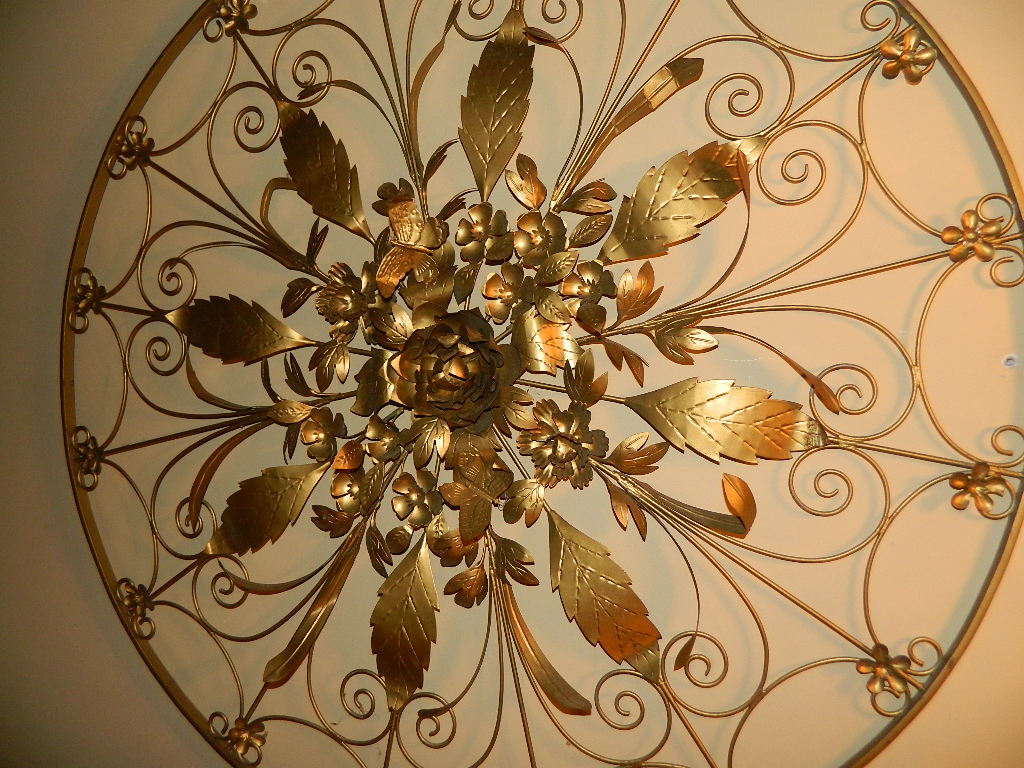 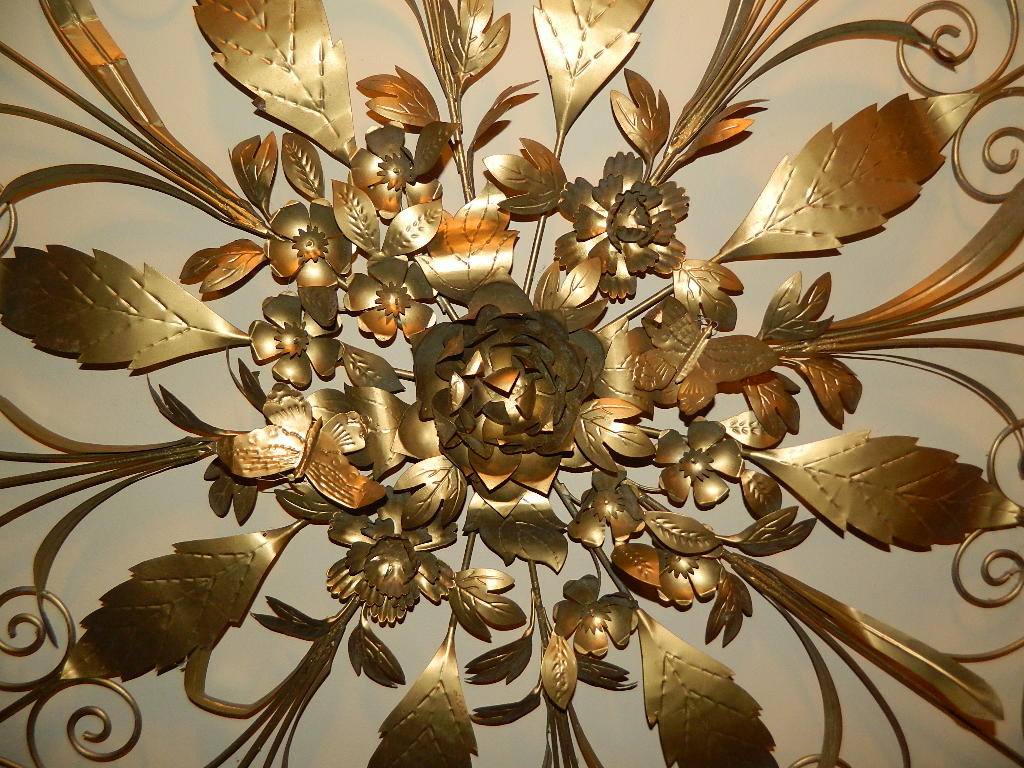 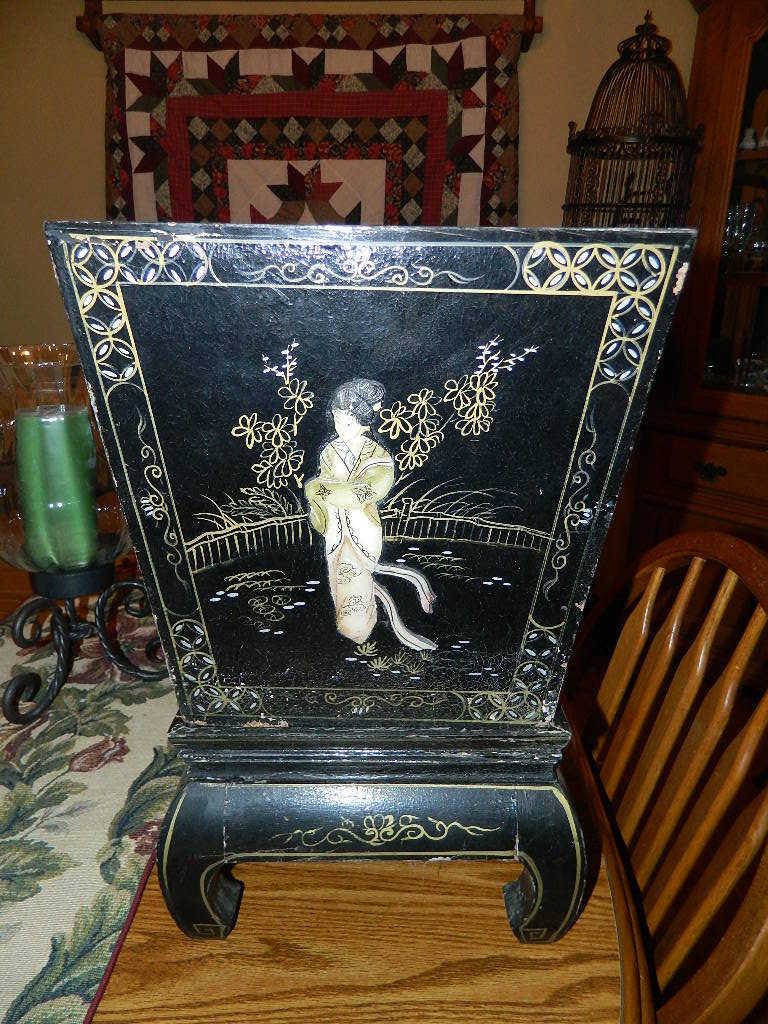 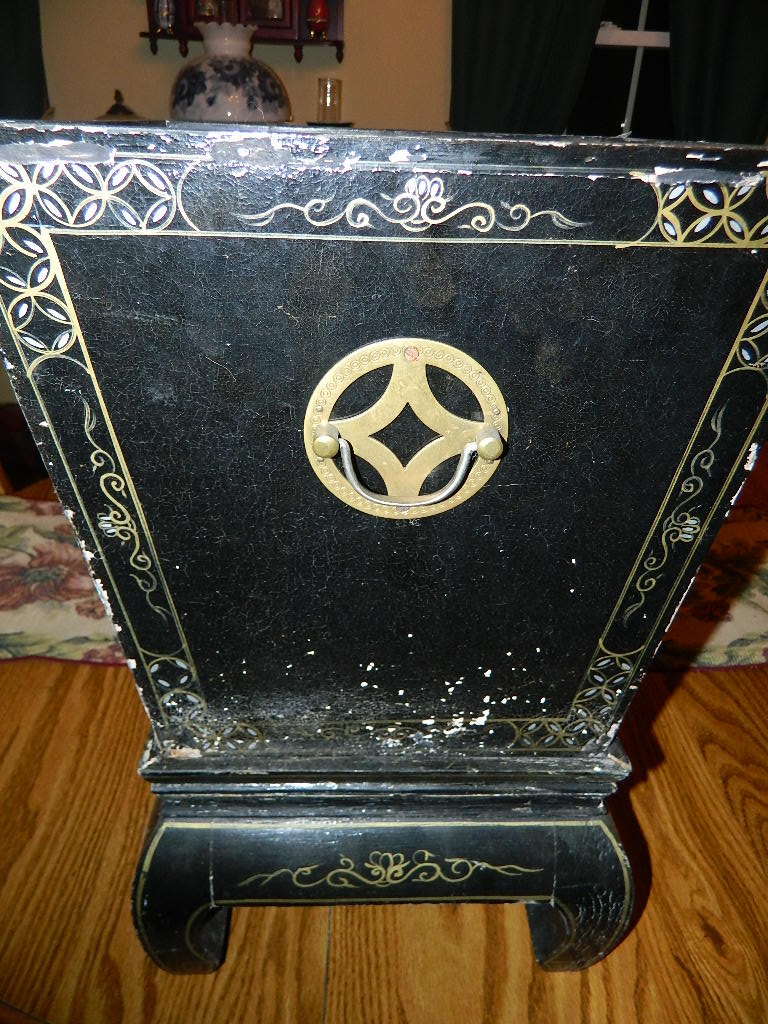 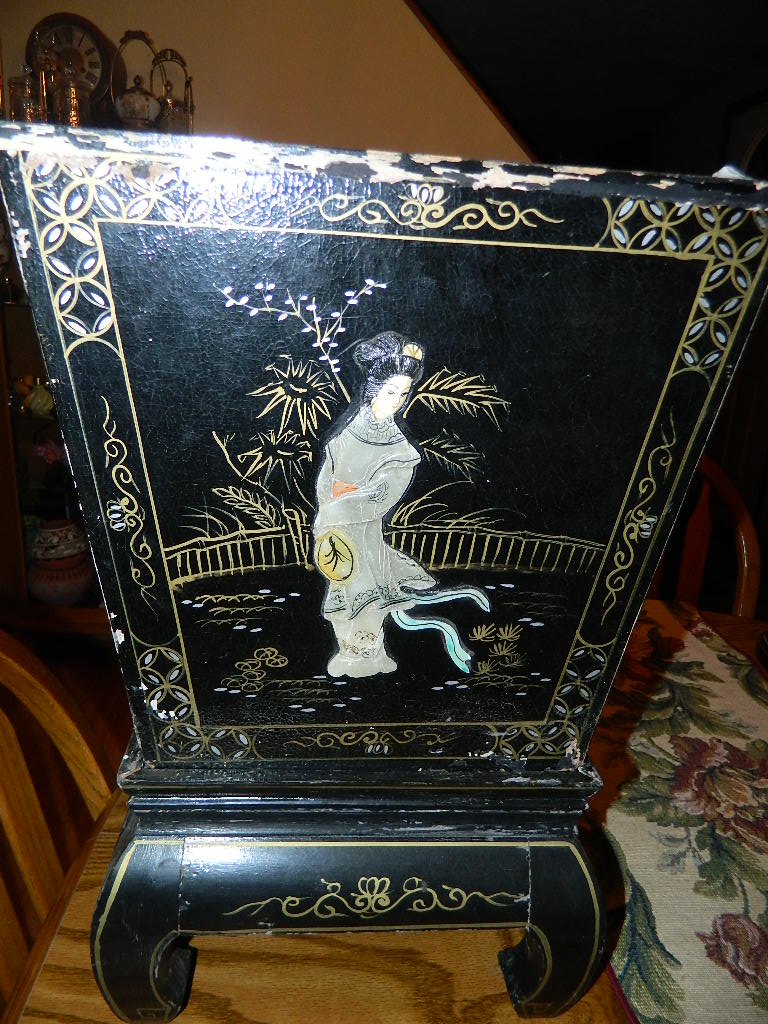 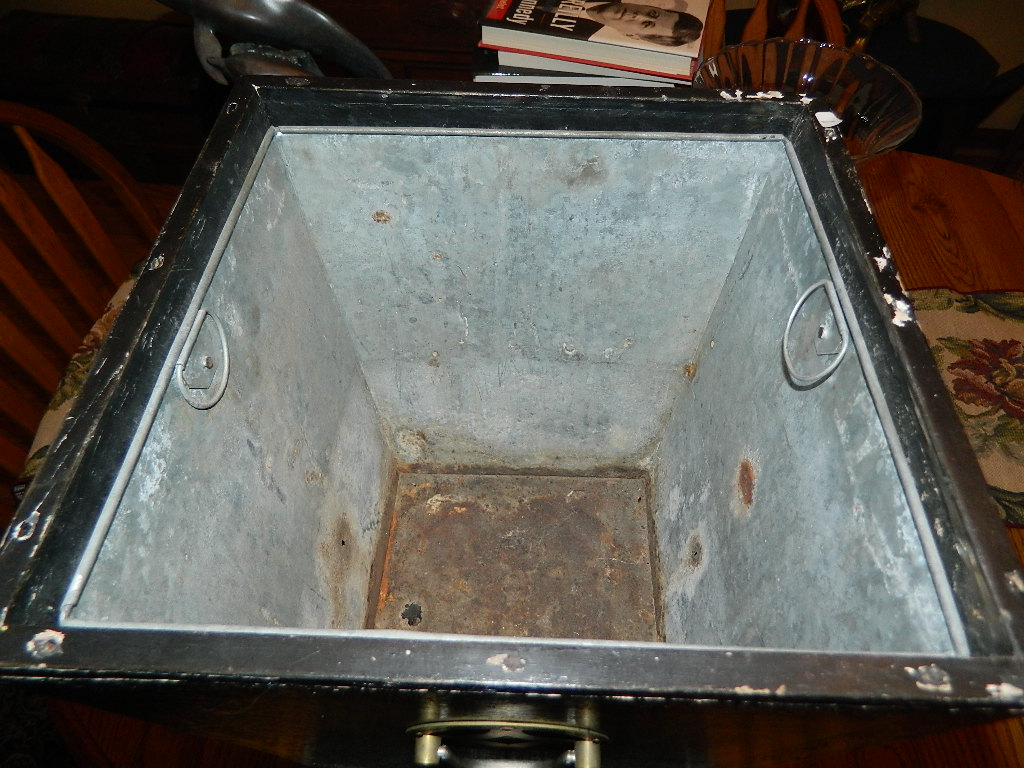 Well, I didn't have any more luck with the dolphin statue than you did. I'm not sure what that stamps says and I ran it through every filter I have. The first part almost looks like a sort of copyright symbol, but I'm not sure. On the plus side, it is signed. That carries more weight than generic mass produced statue.

With how shiny it is, it looks a bit more like brass than bronze on your closeups. It's a really neat statue. It features 2 dolphins swimming or playing along w wave. Judging by the size, I'd say it's probably a mom and calf. It's a well done piece. There is texture to the wave and you can actually see a sort of ripple effect to the wave. It has a lot of nice subtle details that are typically glossed over in your more mass produced pieces. Dolphins don't exactly have a large amount of detail, but, if you look closely, you can see the actual musculature to them. You can see where the body slightly shifts and turns as if they're slightly moving on the wave. It reminds me a little of some of San Pacific International's statues. It shouldn't be too old. It likely dates to the late 20th century.

On your second piece, that's a large metal floral and leaf wall hanging. It kind of reminds me of a rosette window design. I think it's likely tin that's been painted a copper finish. I found this one that is the same sort of metal, but this has been heavily painted and kind of lacquered:

It's very reminiscent of Italian towelware, which is tin that's been japanned or lacquered. You're probably more familiar with the English and French (and American folk style) versions which are kind of like painted sheet metal. You find it on kitchenware a lot. I find the Italian style to be a bit more extravagant. You find it more with wall hangings, sconces, candelabras, etc. as opposed to the more utilitarian northern european style. Like with anything, much of the style was copied by Japan and China and sold back to us as export decor during the 20th century.

Based on the ones I found, it looks like it most likely came out of Hong Kong around the 1970s. That kind of fits the Hollywood Regency revival we had going on around then.

I found the similar ones trying to be sold for about $900 to $1100 without much luck. I think the sellers are shooting a little too high. Realistically, I think you'll be looking more toward $600 to $700

Lastly, your Chinese box. Cellaret's are similar. There are salt boxes and wine cellaret's (which are kind of like the original ice chest) that were metal lined and had a similar design. I think what you have is actually a planter.

I found a few of these:

They're actually listed as planters. They're black lacquer wood and feature either handpainted designs and often have mother of pearl inlay. They typically feature traditional scenes, like courtesans, geisha, cherry trees, birds, etc. Some insides are tin, some are galvanized steel. Most were made in Macau, which is typically thought of as region of China known for ceramics, but they actually produce quite a variety.

.
This one still had the sticker on the bottom

I think the wear on it causes the confusion on the age. Most of these date to late 20th century and I even found a few modern reproductions. Places like Lowes actually have a few for sale. I think yours is no older than late 20th century.

If you have any questions, let me know.

If you would like to use me on any further questions. Requesting me expires in just a short time. If you put my name (DianaF) in the question, that will make sure it gets to me.
.
I look forward to working with you again.
.
I hope you have a great day.
~Diana

Verified
Diana F. and 87 other Appraisals Specialists are ready to help you
Ask your own question now

Thank you for the rating and bonus! If I don't hear from you again this week, I hope you have a good one!

Customer reply replied 2 years ago
MS Diana F., Same to you! Won't be back until next auction which is in a couple of weeks. Although, I may send you one more item which is a J.E. Burke Aluminum Spring Horse that I picked up. Doing research right now on it. Otherwise, will be getting ready for our May Brimfield Antique and Flea Market show. Wish you could come so I could meet and thank you for all your assistance in person. Best Always, Gary

Spring Horse? That's one of the old playground horses, right? I haven't seen those in forever. I once had a customer with mysterious carousel-type horse that for the life of me, I could not track down. It was just made super weird.

I would love to get up that way sometime. I've never been up to that part of the country at all. Seeing the show and meeting you would be a great bonus. =)

Wayne
Appraiser
2,196 satisfied customers
Show more
Disclaimer: Information in questions answers, and Show More
Disclaimer: Information in questions, answers, and other posts on this site ("Posts") comes from individual users, not JustAnswer; JustAnswer is not responsible for Posts. Posts are for general information, are not intended to substitute for informed professional advice (medical, legal, veterinary, financial, etc.), or to establish a professional-client relationship. The site and services are provided "as is" with no warranty or representations by JustAnswer regarding the qualifications of Experts. To see what credentials have been verified by a third-party service, please click on the "Verified" symbol in some Experts' profiles. JustAnswer is not intended or designed for EMERGENCY questions which should be directed immediately by telephone or in-person to qualified professionals.