Ms. Diana F. I am going to an auction tomorrow night and I…

Hello Ms. Diana F. I...
Hello Ms. Diana F. I am going to an auction tomorrow night and I have attached several pictures of items they are going to sell. I know this is unusual, but I cannot find anything like these items and have no idea how much, or how high to bid on them. Unfortunately I only have pictures of what they displayed on auctionzip. So, with that said I would like to know what to call them and if they are worth any money. Not sure of material. Thanks, Gary
Show More
Show Less
Ask Your Own Appraisals Question 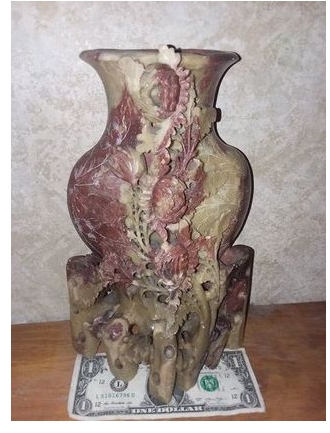 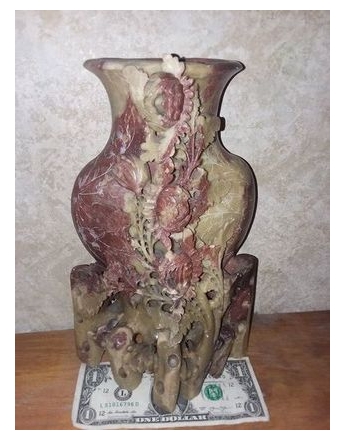 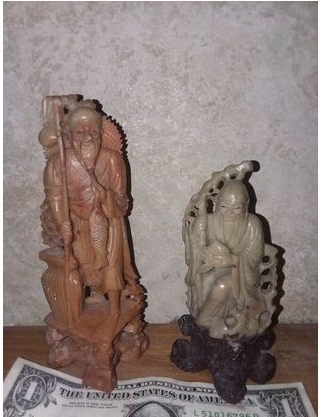 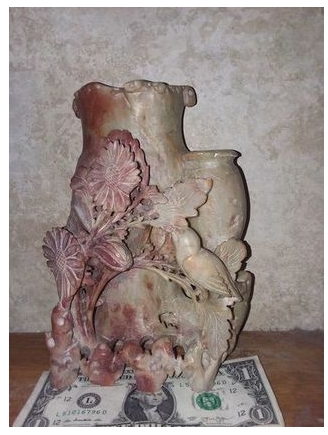 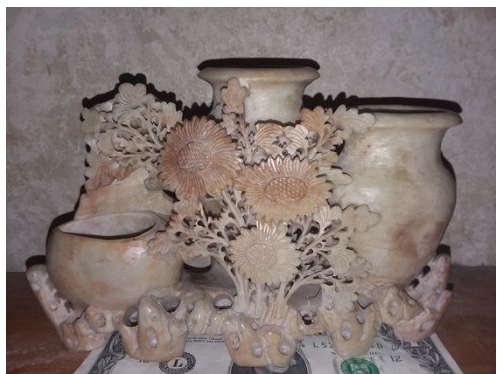 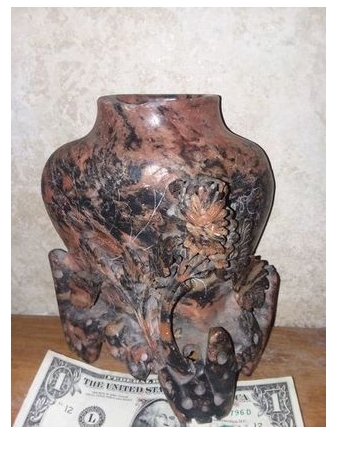 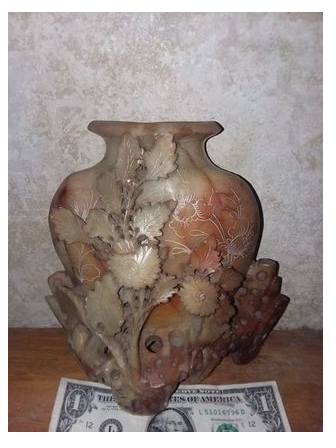 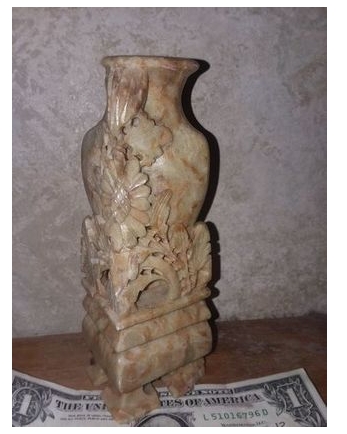 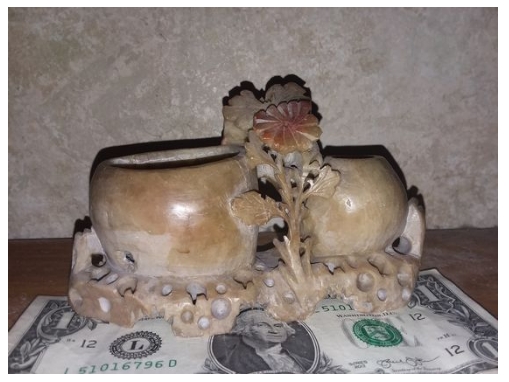 That's old soapstone carvings. How many are here? About 7?

I figured I would go ahead and give you some info on these. We've got some storms rolling in and I don't have much faith in my internet or power. =)

These all look to be vintage Chinese Soapstone Carvings. Soapstone is rock that is largely made up of talc, which makes it great for carving. As an art form, it goes back thousands of years, but much of what we find has been made in the 20th century. In fact, most of the Chinese soapstone carvings you'll find, were made from about 1910 to 1960. Most of it made it's way to the states from soldiers sending gifts home or bringing back souvenirs. Judging by what I see in the pics, I'd say most of those probably date to about the 30s/40s.

They're rarely signed and aren't very uncommon. I'll be honest. They can be a hard sell. They're not unusual, so you don't have a big rarity factor going for you. There are collectors out there, but they're not for everyone. Values are generally based on size, color variations, what kind of grouping, and how intricately they're carved. Unless you have very large or unusual pieces, most tend to sell for around $50 give or take a few.

I know I'm working off rough pictures, so I'll try to do my best on sizes for these. I'll label them according to the picture file names I see:

1) Ethan 4 - This is a grouping of about 3 brush pots with what looks like chrysanthemum flowers. It's a bit of a two-tone though the reddish coloring is more of accent. It looks smaller. It looks to be about 5" tall by about 6" to 6 1/2" wide. One like this will generally be worth about $40 to $45.

2) Ethan 1 - This is a large vase with a carved base that mimics wood a bit. It also has what looks like flowers and vines. It's a larger size. It looks to be about 6" wide by about 11" tall. It has a gorgeous color variation. That reddish purple really pops and creates a great contrast to the lighter greenish coloring. It's pretty well done and from what I can tell the flowers look to be intricately carved. A piece like that is generally worth about $100 to $125.

3) Ethan 6 - This one looks to be about 6" wide by about 7" tall. The coloring is great. It's a two-tone purple and black piece. I see some hints of an orange coloring too. It's mostly a single brush pot, but I do see what looks like one large flower carved up the side of it. The coloring really stands on this one. It'll be worth about $60 to $70 just because of that.

4) Ethan 3 - This one looks to be about 5 1/2" wide by about 12" tall. It's a large one, but not very detailed. It's a two-tone with two staggered vases and what looks like large flowers and a carved bird. The coloring is a little interesting. I like the fact the flowers were carved to take advantage of the reddish variation in the stone. I think it really words to call attention to the details there. Given the size, it should be worth about $100 to $125.

5) Ethan 2 - The smaller one looks like a representations of Shou Lao. Shou Lao is the God of Longevity. He's one of the Sanxing; one of the gods of the three stars and the qualities. He's typically found with a cane. He's a more common, more modern carving. He looks small---about 3" tall or so. He'll be worth about $20 to $30

The larger looks to be about 5" tall. He's carrying a fish. I don't know of any immortal that's generally represented that way so I think he's just an old fisherman. He should be worth about $40 to $50.

6) Ethan 8 - This a smaller one that looks to be about 3" by 6". It's a much lighter tone with minimal variations in coloring. It features a carved pedestal style base. This looks to be a more modern style that you'll find closer to the midcentury. Given the style and size, it's the kind you often find being used as an incense burner. It should be worth about $15 to $25.

7) Ethan 9 - this one looks to be about 5" x 3". It's a double vase style featuring 2 very rounded pots with a carved floral design between them. It's a much lighter tone with very little color variation. It should be worth about $25 to $35.

8) Ethan 7 - this one looks to be about 6" wide by about 9" or 10" tall. It's a bit short and squat. It does have some great color variation that ranges from a sort or greenish color to orange to an almost deep reddish purple. It features a single vase with a floral and vine design. It also looks like it might have an engraved design along the vase. I think the colors work well with the details in the carving. They creates an almost gradient across the vase that makes them pop. A piece like that should be worth about $75 to $100.

So, the values will vary a bit. If you can get them super cheap, you might go for a few of them. Just keep in mind, you might have to sit on them or list them a few times to get them sold. =)

If you have any questions, let me know.

If you would like to use me on any further questions. Requesting me expires in just a short time. If you put my name (DianaF) in the question, that will make sure it gets to me.
.
I look forward to working with you again.
.
I hope you have a great evening.
~Diana

Diana F.
Antiques Expert
Bachelor's Degree
11,789 satisfied customers
Show more
Disclaimer: Information in questions answers, and Show More
Disclaimer: Information in questions, answers, and other posts on this site ("Posts") comes from individual users, not JustAnswer; JustAnswer is not responsible for Posts. Posts are for general information, are not intended to substitute for informed professional advice (medical, legal, veterinary, financial, etc.), or to establish a professional-client relationship. The site and services are provided "as is" with no warranty or representations by JustAnswer regarding the qualifications of Experts. To see what credentials have been verified by a third-party service, please click on the "Verified" symbol in some Experts' profiles. JustAnswer is not intended or designed for EMERGENCY questions which should be directed immediately by telephone or in-person to qualified professionals.