I am trying to file a flood insurance claim and need a value to claim on my Kimball upright. Can you help?

Expert's Assistant: I always love having an appraiser look at my stuff. Sometimes its turned out to be surprisingly valuable. Tell us what else you do know and the Musical Instrument Appraiser will be able to better assist you.

Well, I don't know much. Is there something inside of it that might give me more information? I bought it barely almost used 30 years ago. It had been custom made for the original owner. There's a little brass plaque on it that says "Made especially for . . . "

Expert's Assistant: I love the notion of my brother's old guitar having a history and belonging to someone famous. Maybe you have something valuable or historical. Let's find out. Is there anything else important you think the Musical Instrument Appraiser should know?

I would be happy to send a photo if that's possible.

Show More
Show Less
Ask Your Own Appraisals Question
Share this conversation
Have a specialty? Apply to be an Expert

Hello, my name is***** am a certified appraiser and would be happy to help you. Please post photos fo the piano and look inside for the serial number. It should be on a metal square with information listing the company and will say serial number. To post photos here click on the file upload, add files, or the paperclip button and follow the prompts. I look forward to helping you.

Customer reply replied 3 years ago
This is all I could find. I looked inside, behind, and underneath the keyboard, and I could find no sign of a serial number. 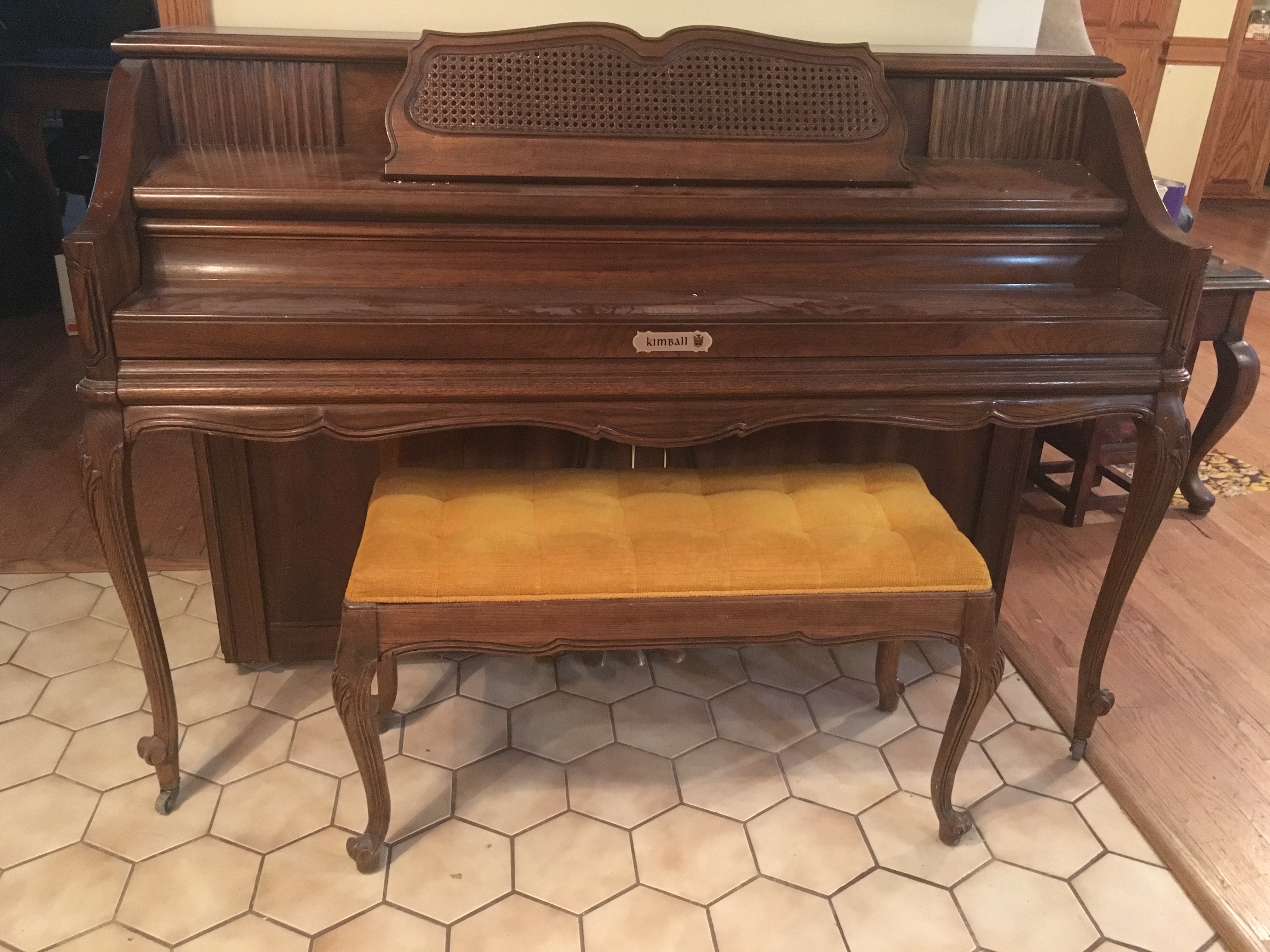 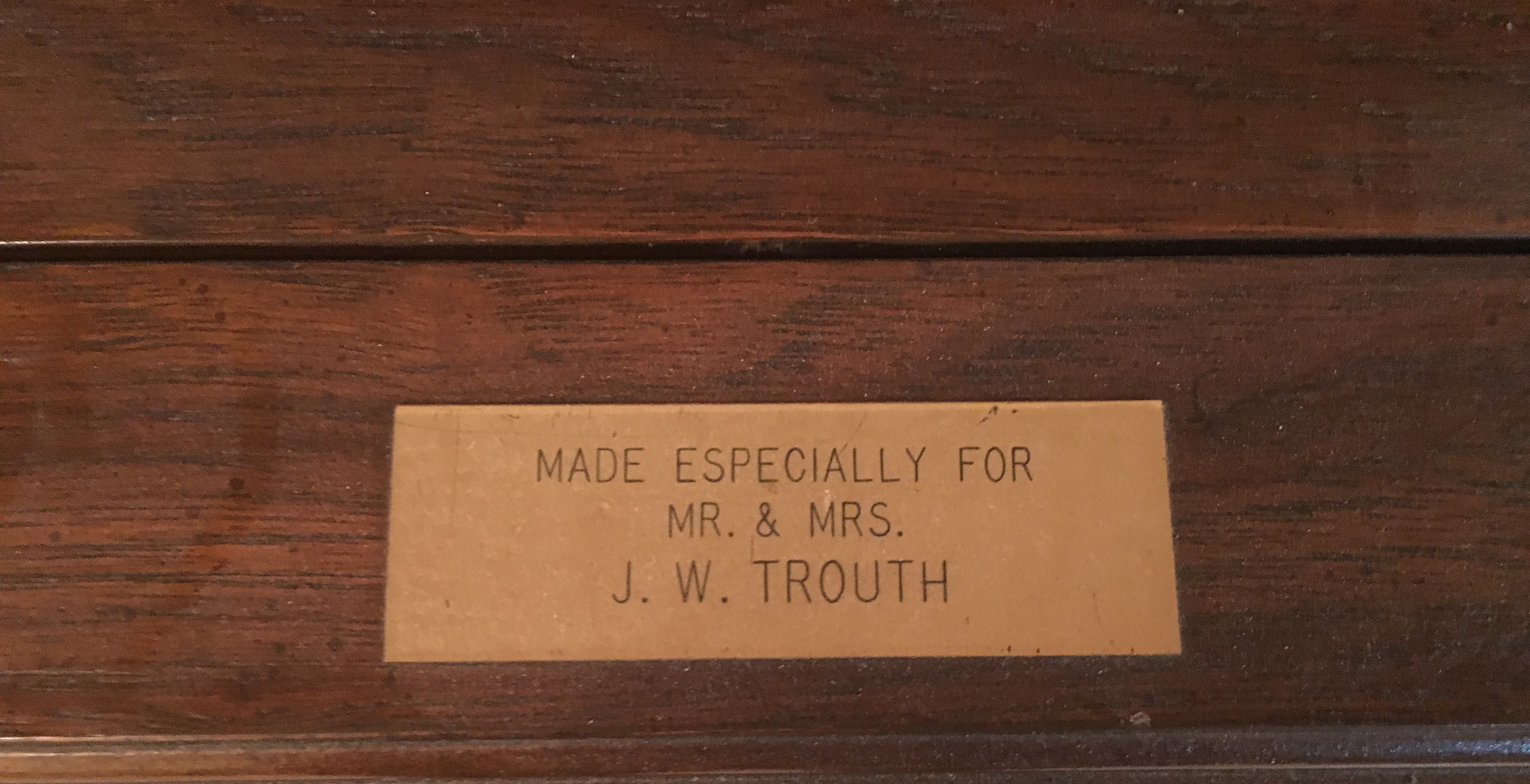 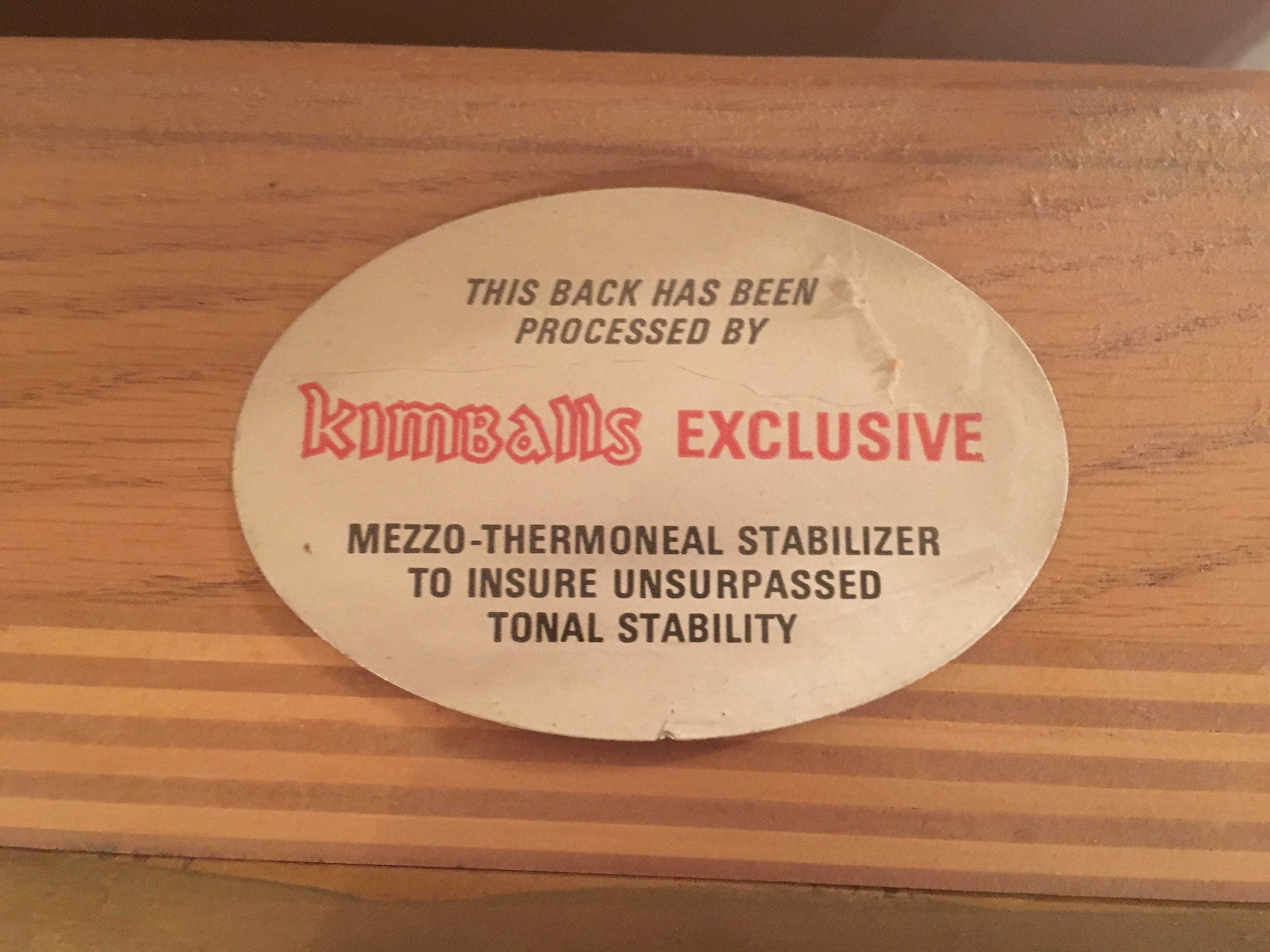 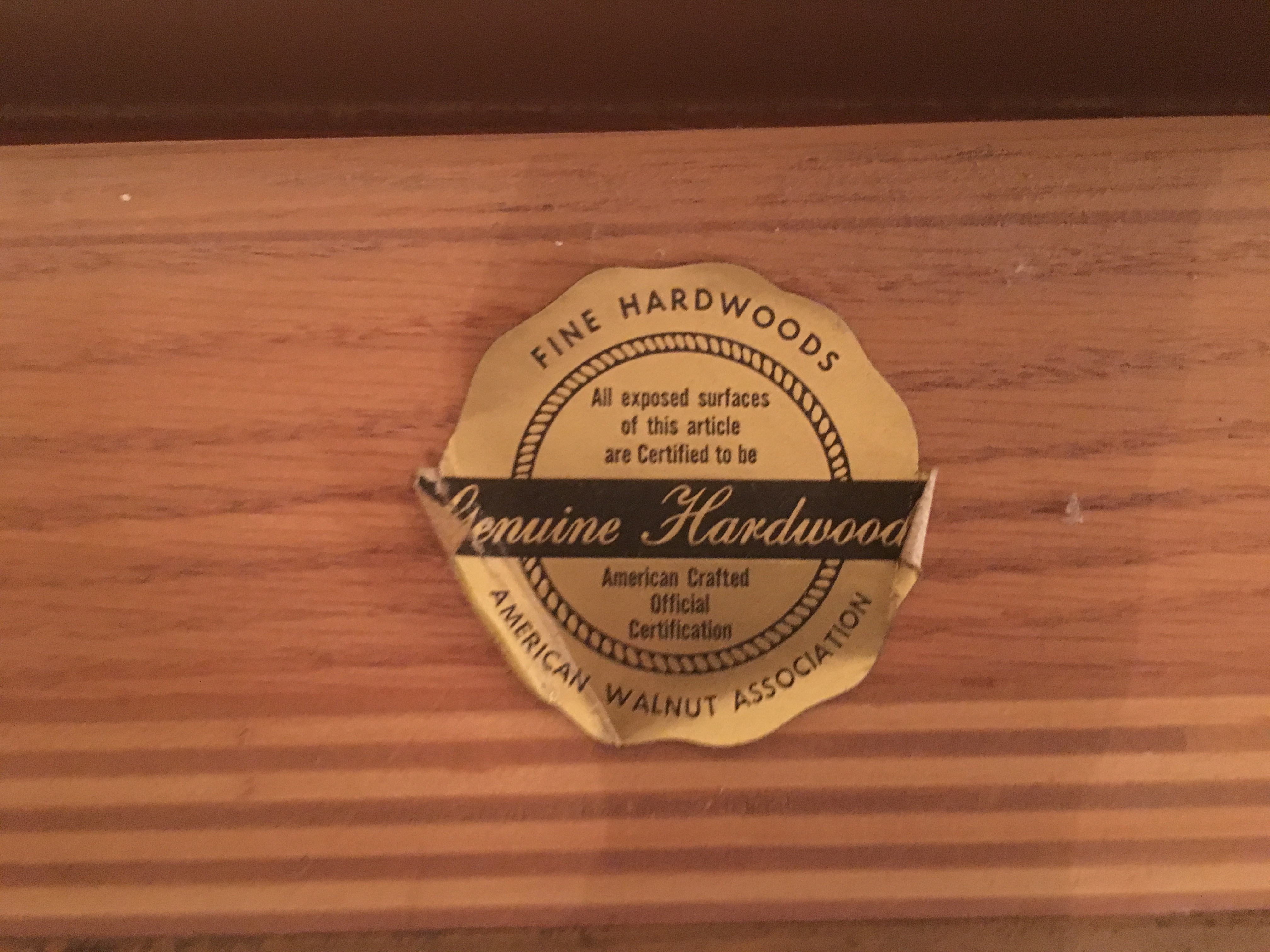 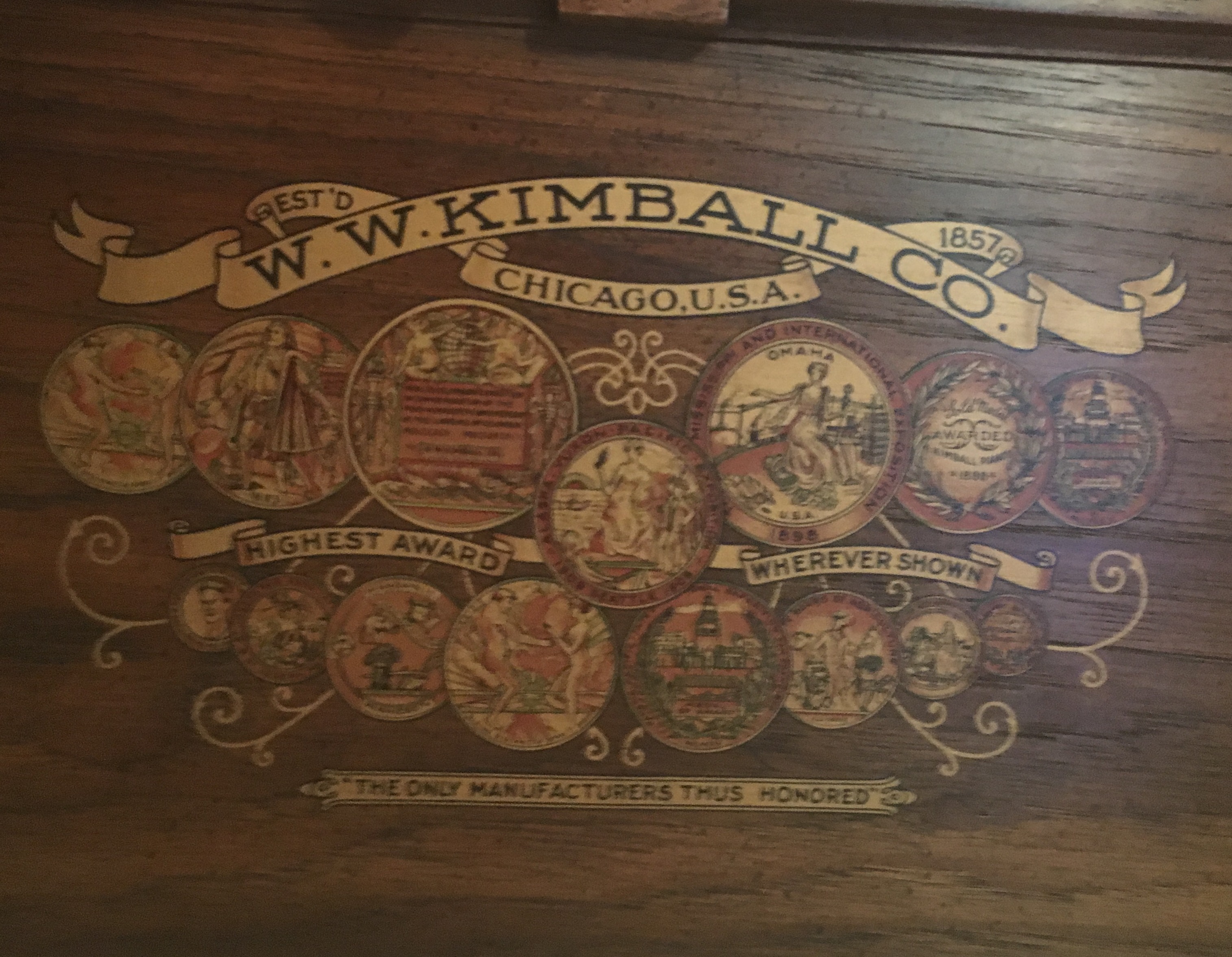 IMG_2157.JPGIMG_2157.JPG
Customer reply replied 3 years ago
You can call me if you like, but I would like to have something in writing to submit to the insurance company. Thanks!

Hi I do not do phone calls, I like ot keep it all in writing so you have written info for future reference. Thank you I do have the photos. I will do this now.

Customer reply replied 3 years ago
Hi! I just got a text that I had a response from you, but I don't see a response.

Hi I am typing now but have not hit send I will post here in a short while.

I do not send emails these come from the company I am sorry about that.

This is a beautiful piano and custom made. The age is 1930-1940s era and being custom made it is one of a kind. The value in working condition is 1200.00 The stool looks to have the original upholstery or has been reupholstered during the 1950s the last time that material was openly available. The piano bench is original to the piano. Beautiful set.

The history of the Kimball Company from the Wikipedia website:

This division started as a piano dealership in Chicago in 1857 as W.W. Kimball and Company by William Wallace Kimball (1828–1904). In 1864, Kimball moved from its earliest location in the corner of a jewelry store to sales rooms in the Crosby Opera House where Kimball sold pianos made by East Coast piano makers Chickering and Sons, the J & C Fischer Piano Company, Hallet & Davis, F.C. Lighte, Joseph P. Hale, and the W.P. Emerson Piano Company. Kimball also sold less expensive reed organs. The Great Chicago Fire destroyed all of Kimball's commercial assets in 1871, but he continued selling from his home, and rebuilt his dealership business.[2]

In 1877, W.W. Kimball began assembling its own reed organs, using actions made by the J.G. Earhuff Company and cases made by contractors. After three years, the company began offering organs made entirely in house. In 1882, the Kimball company was incorporated, and an expansive factory was built to produce reed organs. Soon, the factory was producing 15,000 organs a year; the world's largest organ maker.[2] Kimball stopped making reed organs in 1922 after having produced 403,390 instruments.[2]

In 1887, Kimball began building a five-story factory for making its own pianos, and the next year produced 500 instruments of indifferent quality. Kimball hired veterans from Steinway & Sons and C. Bechstein Pianofortefabrik, and these men initiated improvements to the piano line. By 1893 at the World's Columbian Exposition, at which Kimball received the "Worlds Columbian Exposition Award", Kimball was known for high quality, efficiency in manufacture, and aggressive sales practices using 35–40 traveling salesmen to cover cities and remote areas. Prominent East Coast piano makers snubbed the Chicago exposition because they feared Chicago favoritism, and because of philosophical differences between their reliance on traditional name brand faithfulness and Kimball's streamlined modern efficiency which greatly threatened their sales.[2]

In 1890, Kimball hired Englishman Frederic W. Hedgeland, trained at his family's organworks in London: W.M. Hedgeland. Hedgeland supervised a portable pipe organ design about the size of a large upright piano. The pipe organ division of Kimball also built large, permanent pipe organs, including one for the Mormon Tabernacle in 1901. When the pipe organ division was closed down in 1942, some 7,326 models had been built.[2]

Kimball was involved in making player pianos, the first effort being an automatic mechanism in 1901. As well, from 1915 to 1925, Kimball produced a popular line of phonographs.[2]

During World War II, Kimball produced aircraft parts for major military airplane manufacturers such as Boeing, Douglas and Lockheed. After the war, piano production resumed but a series of poor financial decisions by W.W. Kimball Jr led the company into decline. In the mid-1950s, Kimball built a luxurious new factory in the Chicago suburb of Melrose Park, Illinois, but the factory's high costs, its poor performance, and flagging sales brought the company into grave financial crisis.[2] Kimball had slipped from being the world's largest piano maker to the seventh largest, and it was nearly insolvent.[3]

At the top left above our post are a series of 5 stars: 1 or 2 stars are that I have not helped you in answering 3-4 I have helped you yet not completely and 5stars are I have answered you and been fully helpful. If you still have questions please allow me to help you fully before rating with the stars. I enjoy helping customers and do my best to fully answer all questions.

Verified
LadyTanya65 and 87 other Appraisals Specialists are ready to help you
Ask your own question now
Was this answer helpful?
Yes
No

Tyler
Doctoral Degree
159 satisfied customers
Show more
Disclaimer: Information in questions answers, and Show More
Disclaimer: Information in questions, answers, and other posts on this site ("Posts") comes from individual users, not JustAnswer; JustAnswer is not responsible for Posts. Posts are for general information, are not intended to substitute for informed professional advice (medical, legal, veterinary, financial, etc.), or to establish a professional-client relationship. The site and services are provided "as is" with no warranty or representations by JustAnswer regarding the qualifications of Experts. To see what credentials have been verified by a third-party service, please click on the "Verified" symbol in some Experts' profiles. JustAnswer is not intended or designed for EMERGENCY questions which should be directed immediately by telephone or in-person to qualified professionals.