Hi Pearl. I am actually looking for a tea cup made by grindley c 1920s pattern name is "The Wyndham" reg no 737553. Any chance you can help me find one? Cheers Janelle

Can't tell you much more. The pattern is a transfer not hand painted.

I really, really want one. I have the cake plate and saucer but no cup. Happy to buy a whole dinner set etc. They used to belong to my grandmother.

Hello and welcome! My name is Doris.
I have been an antiques and art collector as well as dealer and appraiser for over 56 years.
I will be pleased to help you. Please know I do not send pop-up offers. Thoughtful responses take time.
My responses are not instantaneous.

Customer reply replied 4 years ago
Hi Doris.
It is definitely "The Wyndham" with reg no 737553. Hopefully I have attached photos of the cake plate and the stamp for you to see. It is not a pattern you see very often. I've only seen it once outside of my grandmother's house.
Kind regards
Janelle 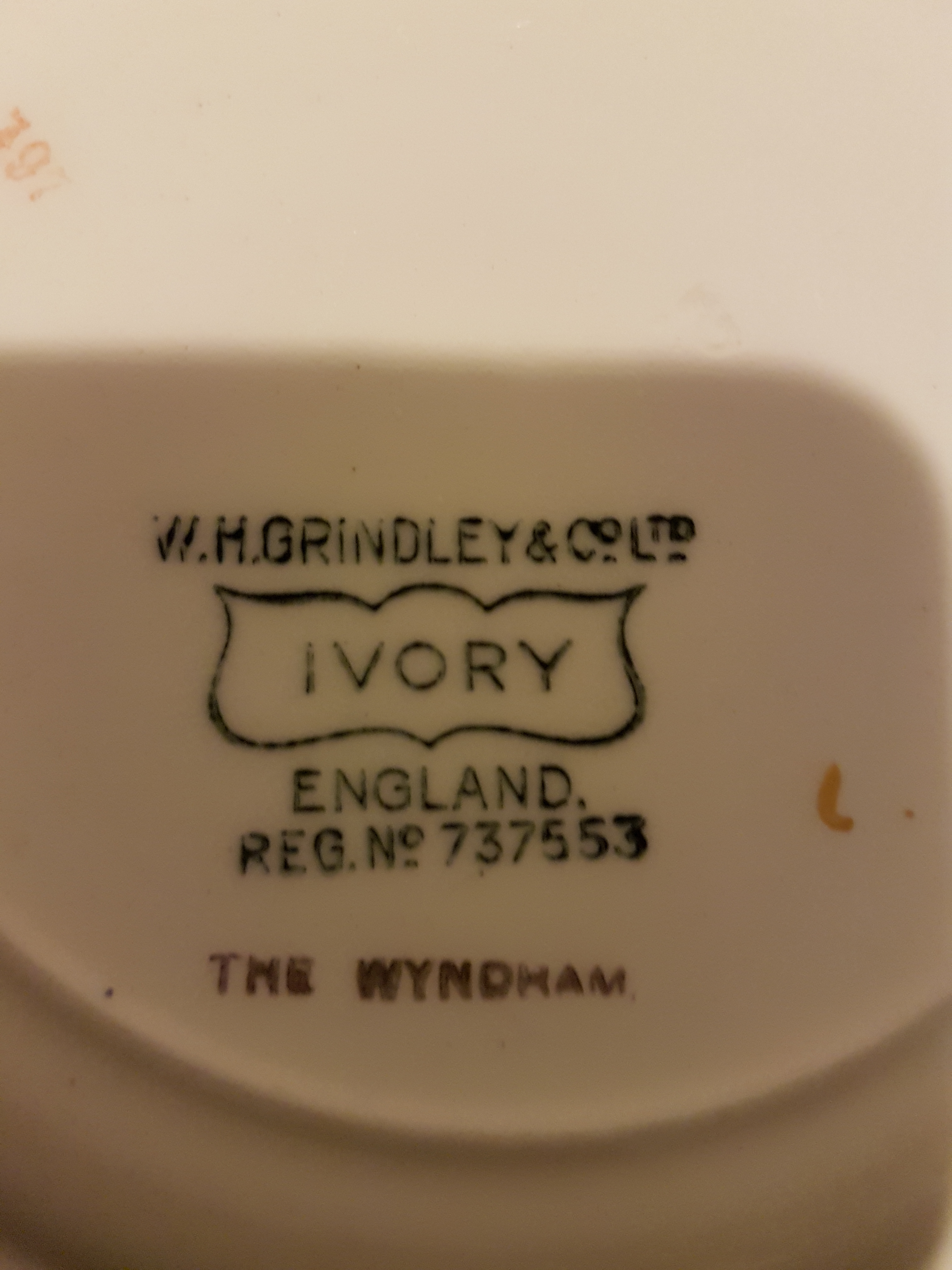 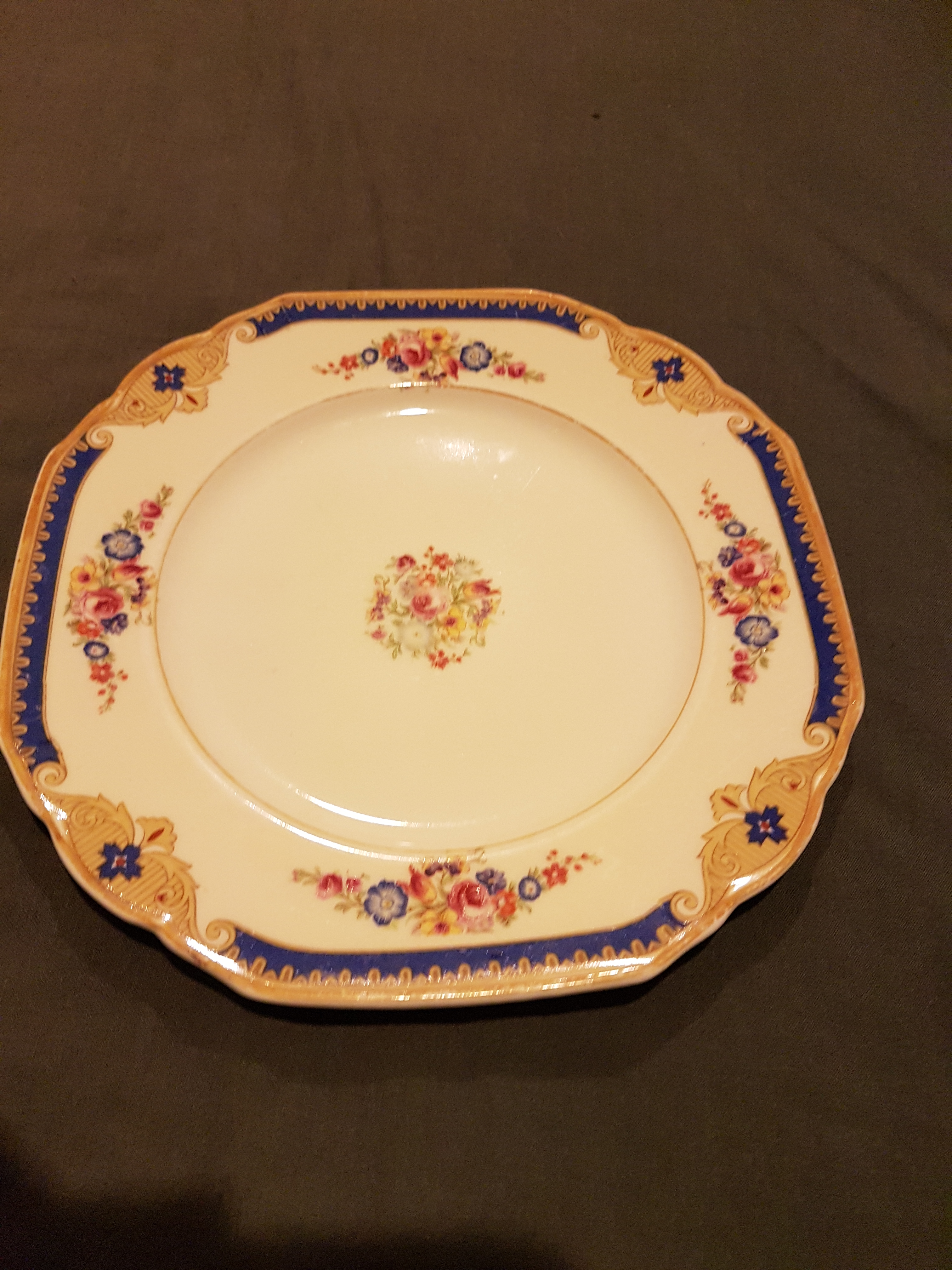 Unfortunately, I cannot find an accurate answer for your question. I will release your question so that all the other professionals can choose to answer you with accuracy.
I want you to have the best answer possible. Releasing your question is called "opting-out." I will not be able to respond to you once I opt-out.
I am very sorry.

Looking at the records for W.H.Grindley patterns, it's clear that The Wyndham was made exclusively for the Antipodean market as the only sales records I can find for it are in Australia and New Zealand. This is not unusual, Grindley did this with a number of their patterns, as did many other Staffordshire makers, particularly Carltonware and Royal Doulton who made many patterns for Australia & New Zealand only.

So the only way you'll find it is on the secondary market in Australia/NZ (local auctions and on line sales etc). However, you also have the added problem of it being a rare pattern, probably produced only for a year or two in the late 1920s or early to mid-1930s. It can be no earlier than 1925 in date because that's when Grindley added the "Ltd" to their name.

Nor can it be any earlier than 1928. The "737553" is the British Design Registry copyright for the "IVORY" clay body that Grindley registered in that year (on which they printed many other patterns too) so "The Wyndham" was issued no earlier than 1928, and probably only for a brief period in the late 1920s to early 1930s according to the fashion for tableware patterns at the time. This was an era of great transition in style from the conservative, formal motifs of small floral bouquets and rococo borders to bolder Jazz Age patterns.

It's interesting that a site like Replacements.com (which is usually remarkably omniscient about obscure Staffordshire patterns) does not even record "The Wyndham", so the only hope of finding a cup is to set up a Saved Search on sites such as Gumtree.com.au or the best New Zealand on line auction site, Trademe.co.nz.

Here's an example of a large service of "The Wyndham" listed recently on Gumtree, so we know it's out there!

You should also set one up for eBay too, it's still the international behemoth when it comes to hard-to-find items and patterns. You never know, there may be someone in England, at Tunstall, Stoke on Trent in Staffordshire, say, where the Grindley factory used to be, whose great aunt hoarded a stash of all the remaining unsold stock of "The Wyndham" in her attic (unlikely, but one can hope!).

Once you've set up your Saved Search on eBay (by clicking the "Follow This Search" link) then as soon as someone lists one, eBay will send you an email alert. You may have to wait a while. I have a couple of "Saved Searches" that have sat for more than two years before an email arrived. Such a buzz when it does, though!

I do hope this helps and best of luck with the search.

Verified
Robert S. and 87 other Appraisals Specialists are ready to help you
Ask your own question now
Customer reply replied 4 years ago
Thank you for your help Robert. This all makes sense. My mother was born January 1934 so I'm guessing Grandma got married about 1932. She got the full dinner set with gravy boat and serving dishes for a wedding gift.
I have had a search on eBay here and England for a few years now. I will now start looking on Gum tree and Trademe.Thank you again for your help.
Kind regards
Janelle

Well that just about nails it! It was surely a wedding gift. My grandmother was married in 1927 but there's not a shard of her china left. What a great survivor yours is! Best of luck with the hunt and thanks for your very appreciative response, delighted to help!

twinb1201
Appraiser & Author
Bachelor's Degree/Graduate Chef's Diploma
929 satisfied customers
Show more
Disclaimer: Information in questions answers, and Show More
Disclaimer: Information in questions, answers, and other posts on this site ("Posts") comes from individual users, not JustAnswer; JustAnswer is not responsible for Posts. Posts are for general information, are not intended to substitute for informed professional advice (medical, legal, veterinary, financial, etc.), or to establish a professional-client relationship. The site and services are provided "as is" with no warranty or representations by JustAnswer regarding the qualifications of Experts. To see what credentials have been verified by a third-party service, please click on the "Verified" symbol in some Experts' profiles. JustAnswer is not intended or designed for EMERGENCY questions which should be directed immediately by telephone or in-person to qualified professionals.