A style horse and rider. Interestingly the rider's head is…

Hi Robert A Tang style horse...
Hi Robert
A Tang style horse and rider. Interestingly the rider's head is unglazed, but nicely detailed and patinated. The only mark on the base is a figure 7. oddly it does not stand solidly on its base but it wobbles.
It stands a healthy 18 inches tall.
I would appreciate your opinion as to age, pedigree and value as always.
I hope you are well and wish you all the best for 2017.
Regards Chris
Show More
Show Less
Ask Your Own Appraisals Question 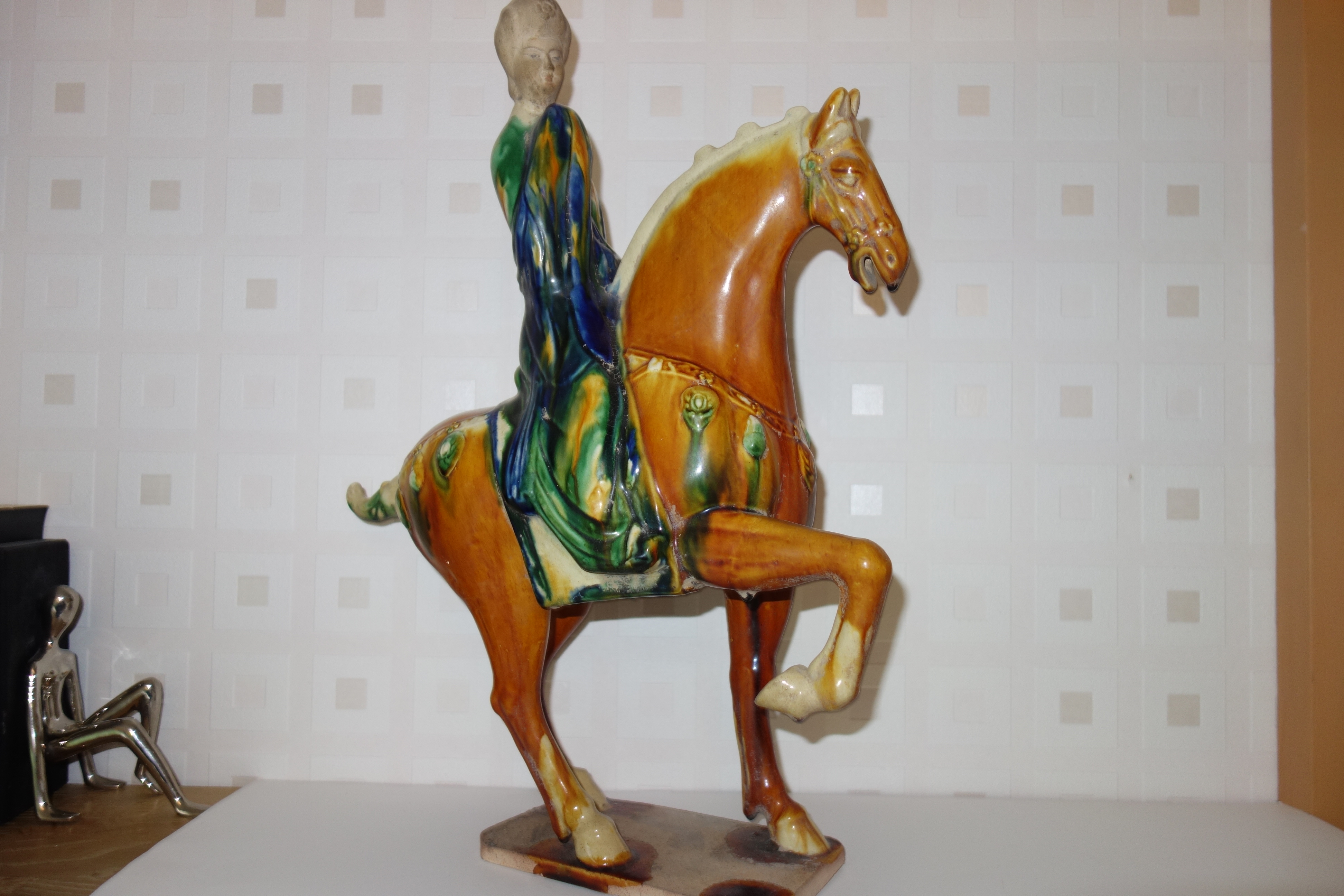 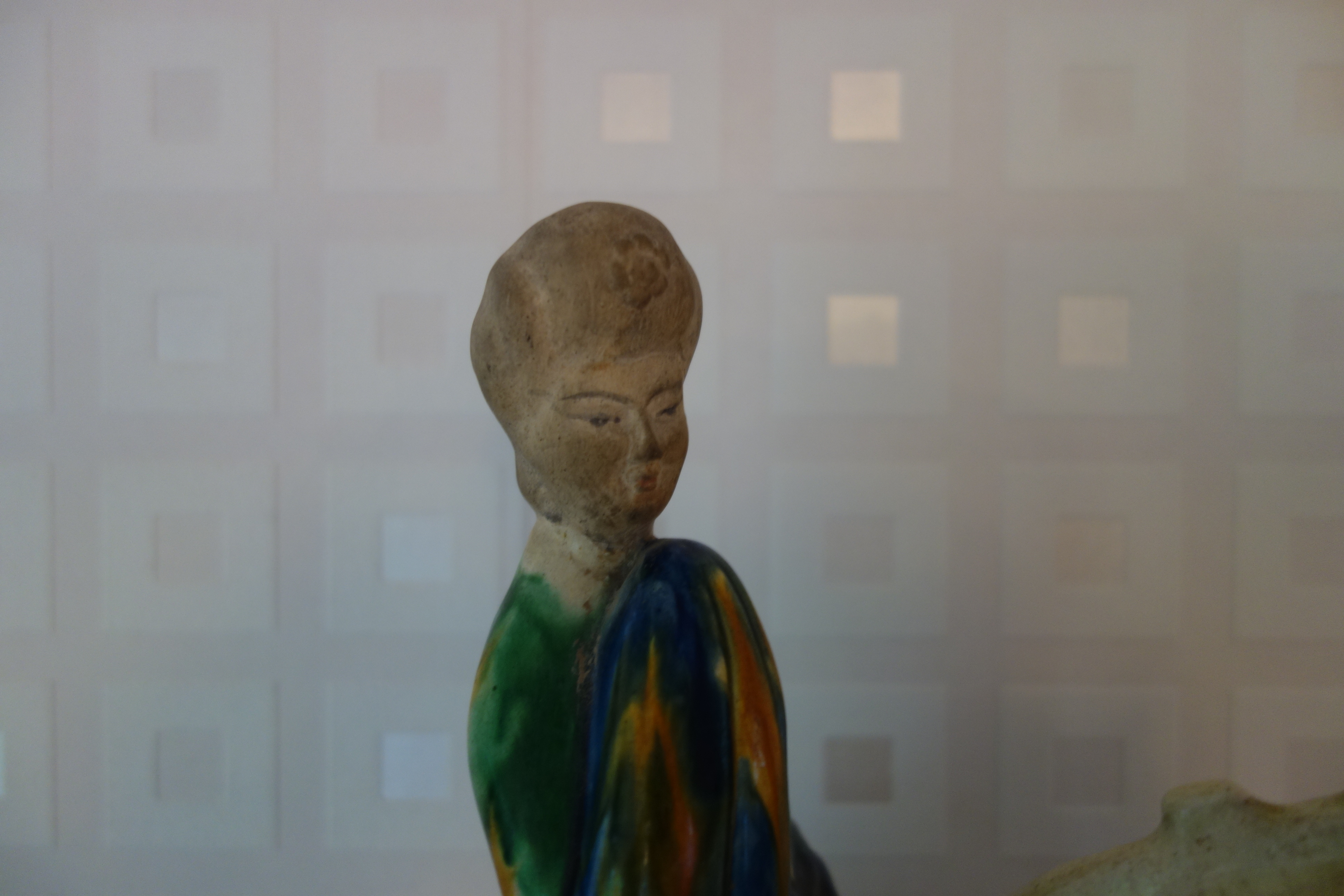 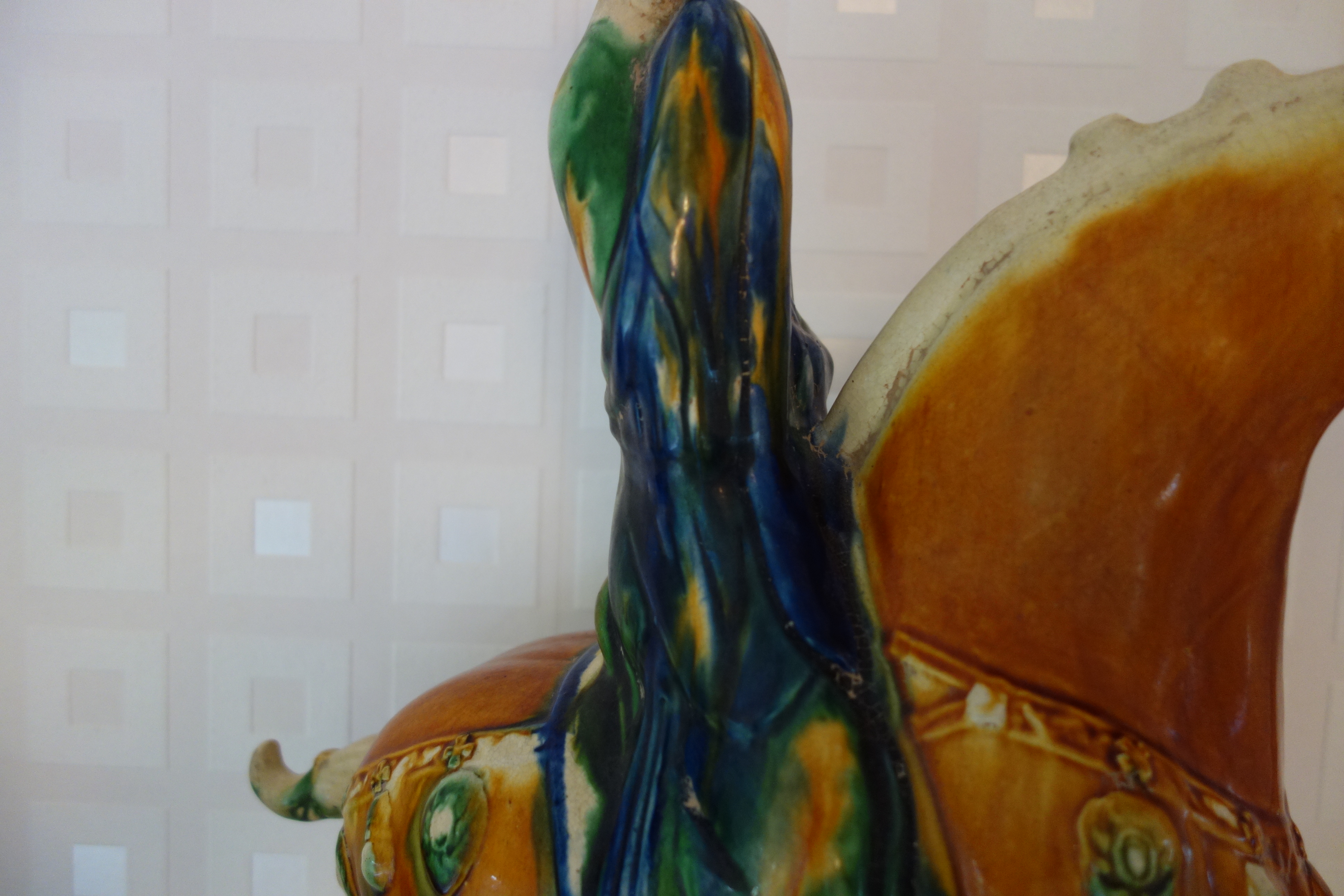 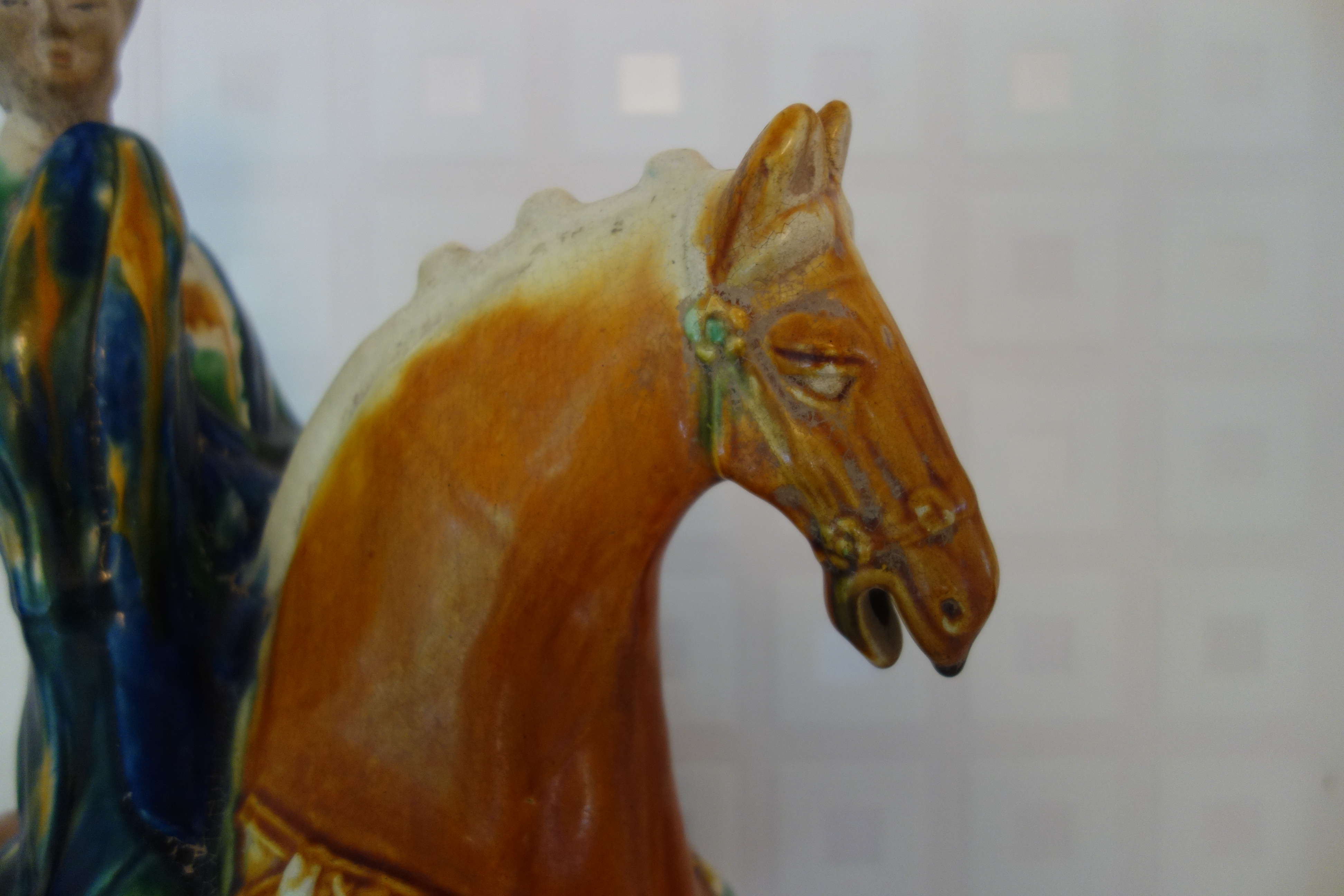 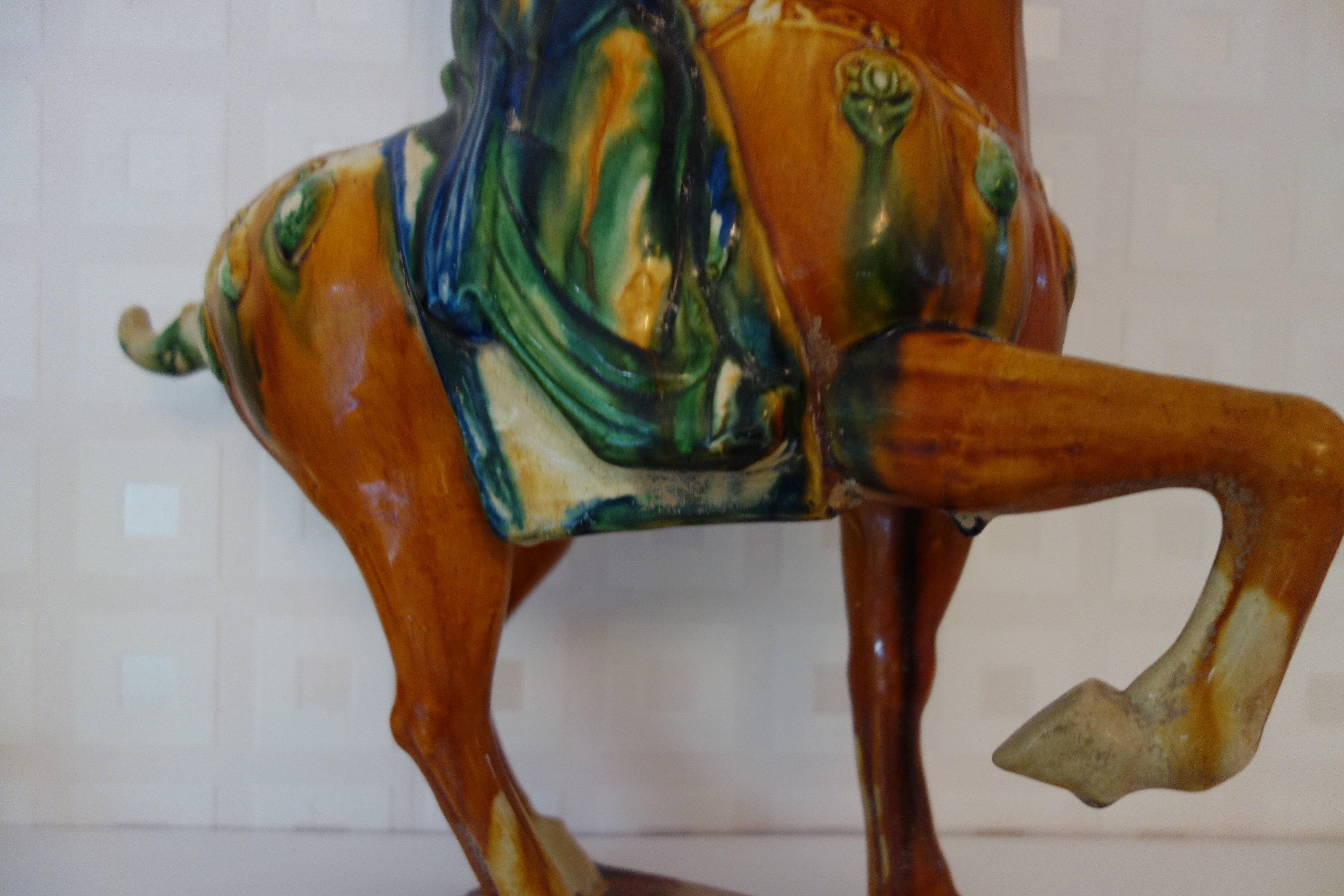 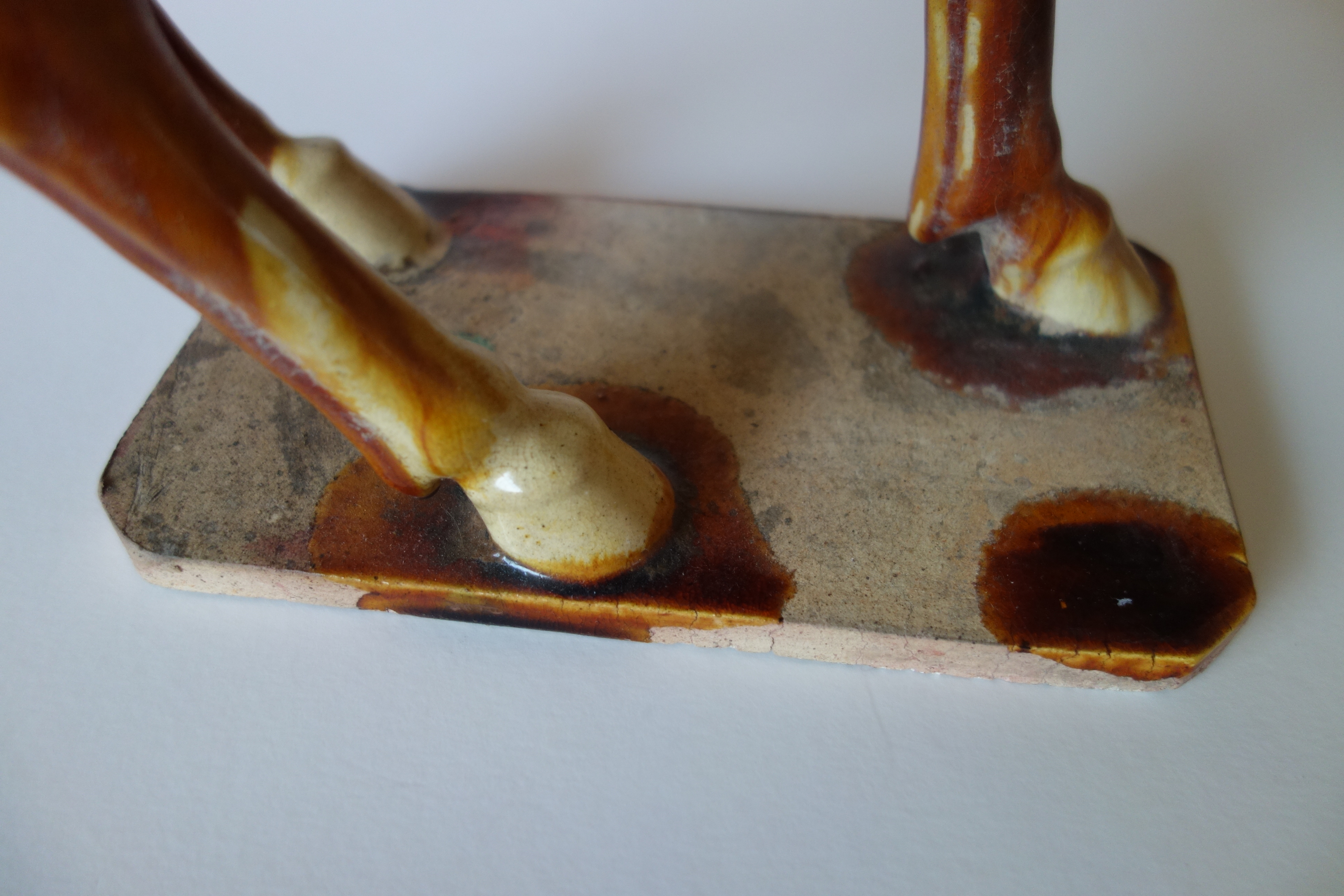 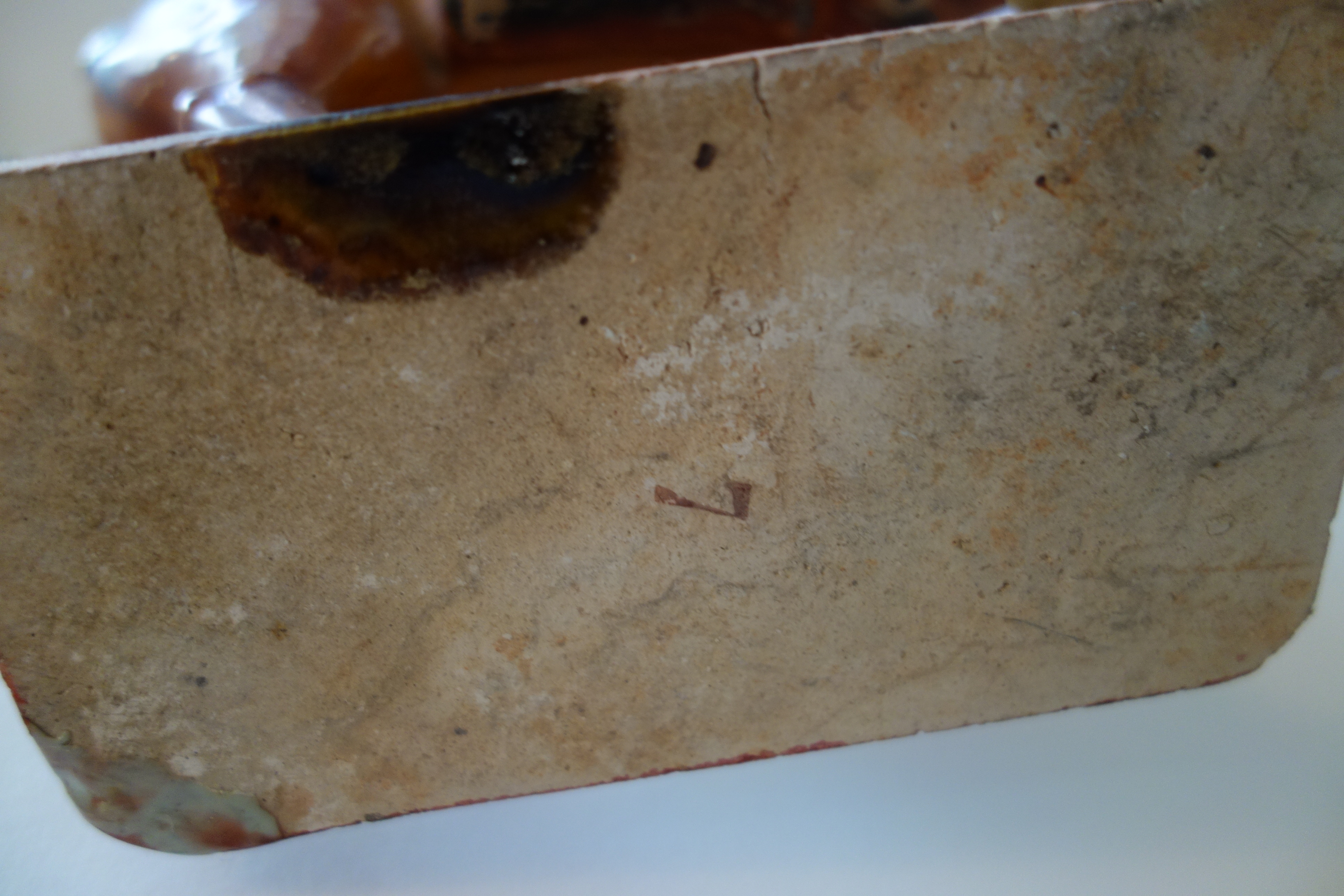 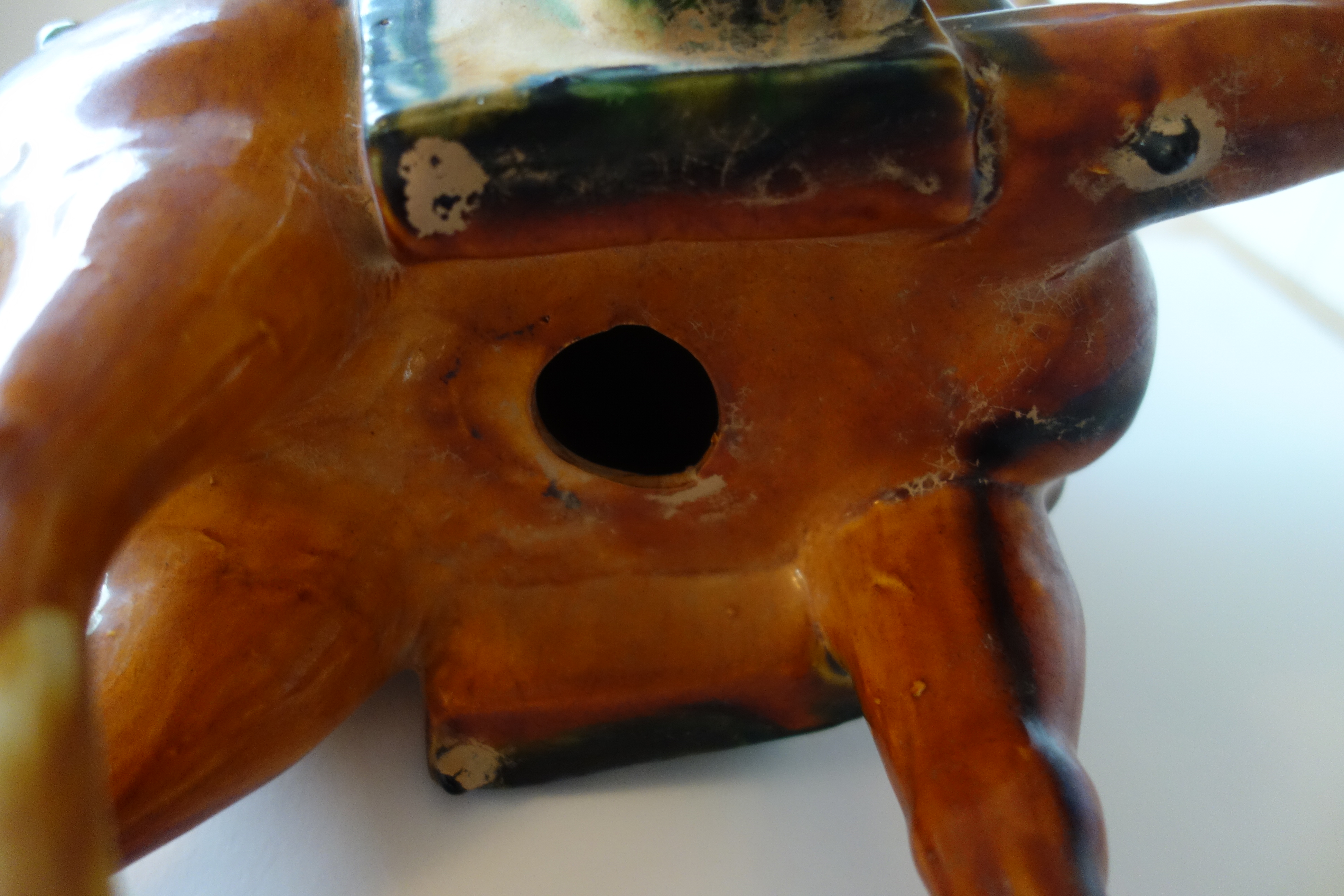 Happy New Year and what a great way to start, with a Tang horse. One of my favorites; timeless and completely pleasing and made the same way for well over a thousand years, to celebrate what is considered the golden age of art and ceramics in China, 618 - 907, the Tang period.

At a time when we were plunged into the dark ages and the ability even to read and write was all but lost, banished by barbarism to fringes of northern Europe -only in Ireland and the western Isles of Scotland did it survive- the Chinese were mastering sophisticated bucket chemistry and developing these wonderful sancai (three color) glazes, to create some of the most beautiful examples of the decorative arts.

This bisque headed version is unusual (but not unheard of) though the wobbly base not so much. The Shiwan mud these were made from (from the Pearl river delta just southwest of Canton at Fushan) was very hard to prevent from warping in the kiln, especially if fired in a hurry before the clay had become truly leather hard, a process that could take six months in the humid conditions of southern China. These days it's done in climate controlled conditions in just a matter of days. So I would look on the wobble as a mark of age and authenticity.

So this piece was made in the same area, Fushan, and of the same clay as your magnificent peacock, and is probably about the same age. The impressed 7 indicates early to mid-20th century when China began introducing western or Arabic numerals as random factory marks.

Horses in the Tang era were a rarity and highly prized for both military purposes and hunting. They were depicted as magnificent, idealized animals and often accompanied by figures of foreign riders and grooms, typically small youthful men ('twas ever such in the world of jockeys) indicating their origin outside of China. However, there are a small number, that are of the period, that depicted a female figure, as here, but the mudan rose in her hair betrays a 'recent' date. Also the raised front hoof usually indicates a recent date too. The Tang originals with riders stand four footed.

All horses belonged to the emperor or wealthy courtiers and they conferred the same sort of status as owning a Toyota technical used to confer to a Jihadist before the advent of precision air strikes. Actually better, as the car industry, not even Toyota, are still a long way from making the self reproducing pickup truck.

These horse sculptures were made deliberately as grave goods, buried with the body of the deceased to help them in their journey to the afterlife. It also explains how this relatively fragile pottery has survived all that time. If they had not been buried out of harms way and instead, displayed in the modern way as a furnishing ornament, there is no way any of them would have survived 1300 plus years of defying the triple domestic perils of gravity and dust ups, literal and marital -not to mention earthquake and war.

Sancai, or "three color ware" are all lead based glazes that are either ochre, green and blue, though often there are more than three. Additional colors include purplish brown, brown, black, white and occasionally a rust red. Certain areas such as the base and in this case the lady's head are left unglazed which, along with the way the glazes all run together, gives them an odd but ever fascinating combination of primitive folk art in shiny modern tie-dye colors.

As far as value is concerned, sadly this composition has been so mass produced, particularly in the last 50 years, that its 'currency' is woefully devalued.

The only ones the market will pay big money for are period Tang examples accompanied by thermoluminescent dating certification. These earlier, 1930s or mid-20th century Chinese Republic, Shiwan examples do attract a small premium but it's always a stretch to get more than two or three hundred dollars for them on line.

Hope you find some useful info in all of this otherwise rather wordy answer.

Verified
Robert S. and 87 other Appraisals Specialists are ready to help you
Ask your own question now
Customer reply replied 4 years ago
I love your wordy answers you know I crave the history so I know what to look for.
Meanwhile in typical style it cost me £25.
Sad life ain't it
Regards
Chris
Was this answer helpful?
Yes
No