Hi Robert, Thanks so much for all the details you provided…

Hi Robert, Thanks so much for...
Hi Robert,
Thanks so much for all the details you provided on the wood blocks!
I have two items that I'd like to get estimates for:
1. Jade citron vase: 5" tall by 2.75" wide, weight 13.2 oz.
https://app.box.com/s/vpqi3t7471aq9ooxmmjo
2. Rose quartz Gwan Yin: 8" tall by 5" wide
https://app.box.com/s/z4u26yv0v60xdcnh9qwq
The stands are not included in the measurements. I purchased these at an estate sale earlier this year. They are both in very nice condition.
Please let me know if you need more info and I will be glad to get it to you.
Thanks, Robert!
Best,
Eugene
Show More
Show Less
Ask Your Own Appraisals Question
Share this conversation

Just letting you know I got this Q and will have an answer for you as soon as I can.

Many thanks as always.

I'll try to get to this today, but it may be tomorrow.

Sorry for the delay, Eugene, I am only now getting back to work again after some unexpected diversions, (aka, mother-in-law visit)

These are two really beautiful examples of Chinese hardstone carving.

This is a vary fine example of a carved and polished hardstone citron fruit & leaves, often called a "Buddha's hand" or foshou 佛手. In the eccentric Chinese world of superstitious puns this sounds so much like "Fu" 福 and "Shou" 寿 the words for happiness and longevity respectively that the citron, or Buddha's hand, has become a popular symbol for both. The citron is also one of the Three Abundances, along with the peach and the pomegranate, so considered very auspicious.

Dating these pieces is always difficult, but the quality of the carving, as well as the style and condition of the carved stand, which is almost certainly contemporaneous, points to a late 1800s to early 1900s date.

As far as the material is concerned, although these are always called 'jade' I am 99.9% sure that it won't be true jade, which is either jadeite or nephrite, the only two minerals considered to be true jade. Most of the carvings of this color and hardness and age that originate in China turn out to be either aventurine, serpentine or (rarely) bowenite or in modern times some type of quartz, usually dyed. These are all almost as hard as jade (not easily scratched with a steel needle) but none of these has the density of jadeite (which has a density of over 3) and nephrite (which has a density of just under 3). If you want to know more about how to tell the difference there's a great site here to begin with.
http://www.wikihow.com/Tell-if-Jade-Is-Real

Authenticating jadeite/nephrite involves a combination of tests for density and hardness and electrical conductivity as well as examining the opacity and microstructure and color.

So the rule of thumb with hardstone carvings of this size is: if it looks like jade and it comes from China (and is sold as 'jade' or 'jadeite'), it probably isn't. Having said that, this is all a bit of a red herring because collectors understand this and place value on other features of the item such as the artistic merit of the carving rather than on the rarity or type of material.

So a Buddha's hand of this age, style and artistic merit, no matter what the hardstone species is a very desirable item and would sell at auction in an Asian arts sale in the range of $1200 - $1800. Replacement/insurance value $3600.

A figure of Guanyin, holding a fan, or possibly Diaochan, one of the Four Chinese Beauties, often depicted this way in a bower of mudan or tree peony, symbol of loyalty, happiness and eternal beauty.

I love the translucence and delicacy of the carving in these Guanyin figures, always a marvel how the artist worked on these for the weeks and weeks it would have taken without breaking any of the finer detail. But then we only see the successes.

Going by the carving, I would date this to the early Chinese Republic era, certainly pre-1950.

Like the 'jade' pieces, rose quartz carvings are also highly collected, but oddly (because they are often more ornate and detailed) do not fetch prices quite as high. 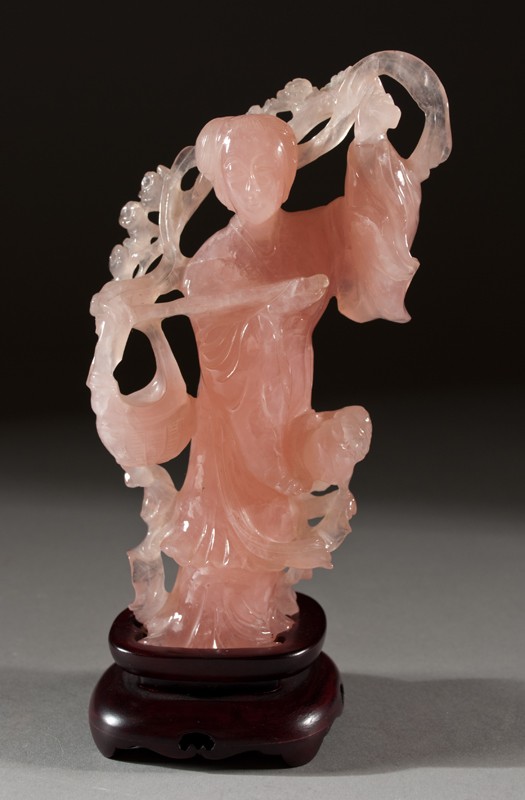 This similar one to yours sold recently at auction for $750, which is about right.

I do hope this is helpful.

If there's anything more I can help you with on this question, please let me know.
If not, could you very kindly rate my answer as I'm trying to get loose threads tied up before the holiday break.

Meanwhile, I hope you have a wonderful Thanksgiving!
Many thanks and best wishes as always.
Robert

I'm always amazed (and totally impressed) with all of the information that you find on my items. How do you do it? :)

Thanks, Eugene! I took a break from the turkey and saw your note.

Hope you are having a wonderful Thanksgiving yourself.

Look forward to seeing more of your treasures as and when.