Sorry I'm a bit slow. I'm going to be off/on for the next few days so if I take awhile to respond, don't worry. My grandmother passed and we're getting ready for the service, trying to fly my brother in and all that fun stuff. I'm still checking in and working when I can grab time. I keep your stuff on my top priority list, so I shouldn't be too far off my normal speed.

97. new Little Chef with tray 12"h (resin I think) - it should be. These were little poly resin figures. They had a little series of them- each holding things. I think one was even a wine bottle holder. It's worth about $15.

98. six Christmas mugs with lids "The Toscany Collection JAPAN all pieces are china inc. tops -That's called Deer Christmas. It's a modern pattern, but based on my records it is discontinued now. They're worth about $5 to $8 each.

99. 8 linen vintage napkins - Those are roughly from about the 40s or so. Linens in general don't bring what they used to, but they still have some value. The embroidery work looks good. It almost a French style. They'll be worth about $30 for the set.

101. 15 x 12 blue birds not blue birds blue..birds lol n info can't read sig. If I had to guess I'd say Thomas Jefferson lol - Sure. If that was Jefferson's I'd be putting you in touch with the biggest auction house I could find. I'm not sure what that says. It's small and faded. =( I think they're types of blue jays (like a blue jay or a scrub jay). It's a print from what looks like one on of the old illustration books (kind of like the prints your mom has). I would say it's from the 60s or so and worth about $30.

102. two pics both have same info on back 18.5x16" (see pic) - Those are pieces by Carl Spitzweg, a german bidermeier style artist from the mid to late 1800s. One is the portrait painter from 1858. Your print is a cropped version of it, most likely from the midcentury or so.

103. T Kinkade Painter of Light 1995 Light Post Publishing with Easel and signed - This little miniatures were so popular in the 90s. I think they're cute. They're little keepsake versions. Yours is in a bit more of an ornate frame. As is..it'll be worth about $30 to $40.

104. Pimpernel hard placemats made In England four different scenes - Those are modern. Pimpernel has been producing that kind of line for about past 20 years or so. They are pretty. They're worth the full $38, but won't sell that high used. Used, they'll be worth about $20 to $25.

105. It's really hard to take pictures with glass..my house has so many lights lol "the Kiss" by Francesco Hayez vintage litho told it would be $125 - Hayez was an Italian romanticism painter during the early to mid 1800s. The Kiss is one of his most famous works. It's a beautiful frame job. It's a high quality print too. About $125 isn't bad. I'd actually put about $125 to $175 on it.

106. carriage 12" long with vase 7"h on bottom Japan plastic carriage Personally that vase doesn't go with that "carriage" color is all wrong - Are they separate? If they can be detached..sell them separately. It'll look better. They're import pieces from the later part of the 20th century. The vase will be worth about $15. The carriage or rickshaw looks like a YAMANAKA piece. It's plastic lacquerware. It's would make a better plant stand. It'll be worth about $10

107. Kimono price? I assume it is for a doll 12" top to bottom - I think that's just considered a traditional jacket. Kimonos tend to be more like robes. I think it's called a pankou. It's modern, but cute. The symbol should be a happiness or double happiness symbol. It'll be worth about $10.

108. made expressly for Upper Deck Ltd. Made in Taiwan... Blue salt and pepper 4"h - Upper Deck is a modern giftware co. They specialize in reproductions, gifts, etc. They're modern but made to look like cobalt shakers from the 40s/50s. They'll be worth about $10..maybe $15.

109. Royal Crystal Rock candles and candle holders found them on line but no price 4.25"diam - That's a modern giftware/glassware company that specializes in Italian styles. The pattern is Aurea. The pattern ran from 1989 to 2009.They're worth about $30 to $35.

110. Formalities trinket box egg by Baum Bros. made in China 3.5"h -Formalities was a line they produced around the 70s/80s until...about the 90s give or take a few. Their trinket boxes are very much like the old Limoges trinket boxes. It'll be worth about $5 to $10.

111. 3.5"sq x 1"h ashtray? = That looks like one. I see about 6 dents which would be right for an ashtray, but they're big. Ashtrays tend to have a hole just big enough for a cigarette. Yours has more like slots. I think it's the bottom of a candy dish. It's a little hard to see but... 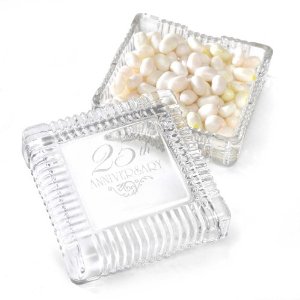 It looks like their piece. It's by Hortense Hewitt. It's a gift ware co. With just the bottom, it would be worth about $10.

If you see anything just let me know. =)

When you get the survey in email please consider filling it out. These ratings should be based on my professionalism and courteousness to the customer. I am not responsible for any issues with the site or any values that are not as high as expected. I cannot control either one. Thank you so much!

Have a great night!

first of all sorry to hear about your grandma..my thoughts and prayers are with you and yours.

thanks for always thinking of me and having me on your top priority list..

Thank you. That means a lot. It's wasn't unexpected, but ..still.

the next one August #2 I forgot to sign...first time ever, I think

~Helen maybe that will make up for it (:

Register Here
Was this answer helpful?
Yes
No

Diana F.
Antiques Expert
Bachelor's Degree
14,298 satisfied customers
Show more
Disclaimer: Information in questions answers, and Show Less
Disclaimer: Information in questions, answers, and other posts on this site ("Posts") comes from individual users, not JustAnswer; JustAnswer is not responsible for Posts. Posts are for general information, are not intended to substitute for informed professional advice (medical, legal, veterinary, financial, etc.), or to establish a professional-client relationship. The site and services are provided "as is" with no warranty or representations by JustAnswer regarding the qualifications of Experts. To see what credentials have been verified by a third-party service, please click on the "Verified" symbol in some Experts' profiles. JustAnswer is not intended or designed for EMERGENCY questions which should be directed immediately by telephone or in-person to qualified professionals.