Robert S, if available. I have 3 plates marked Bavaria 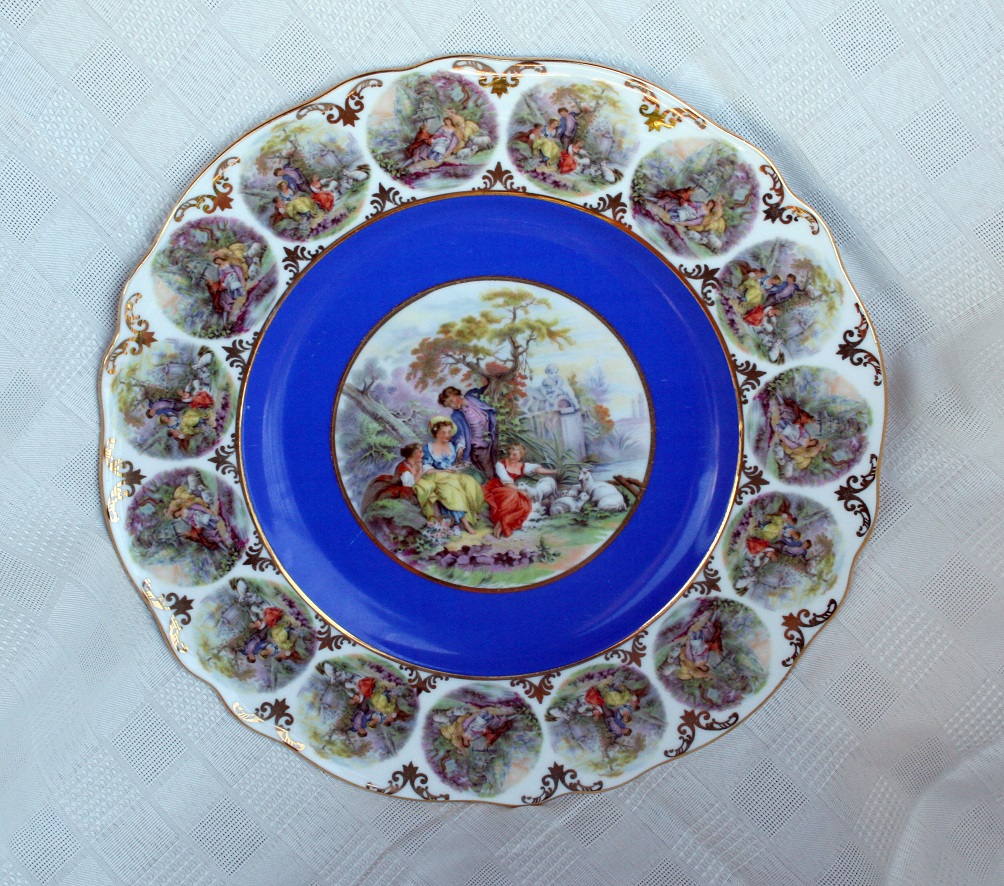 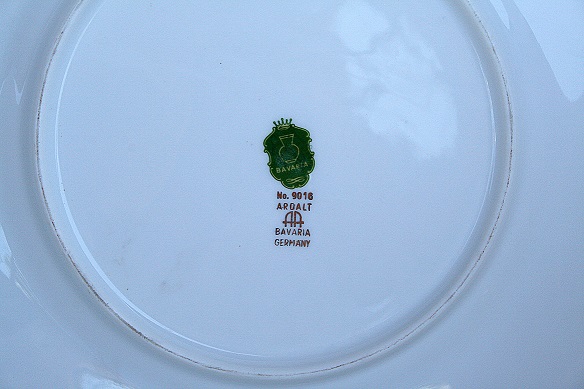 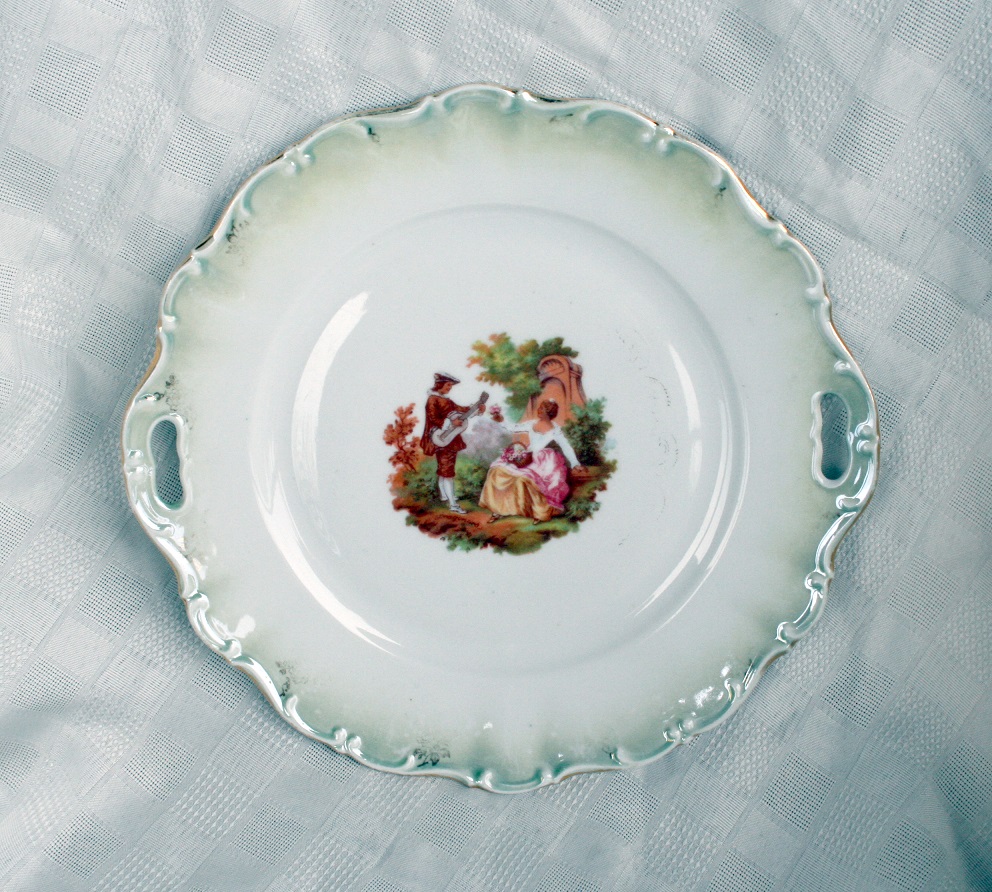 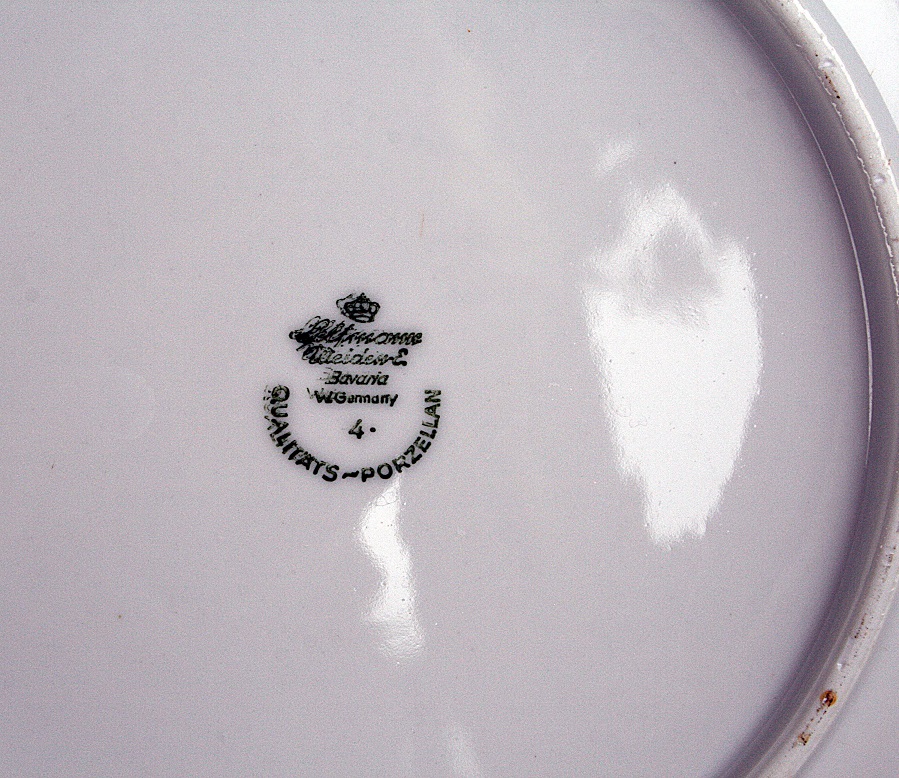 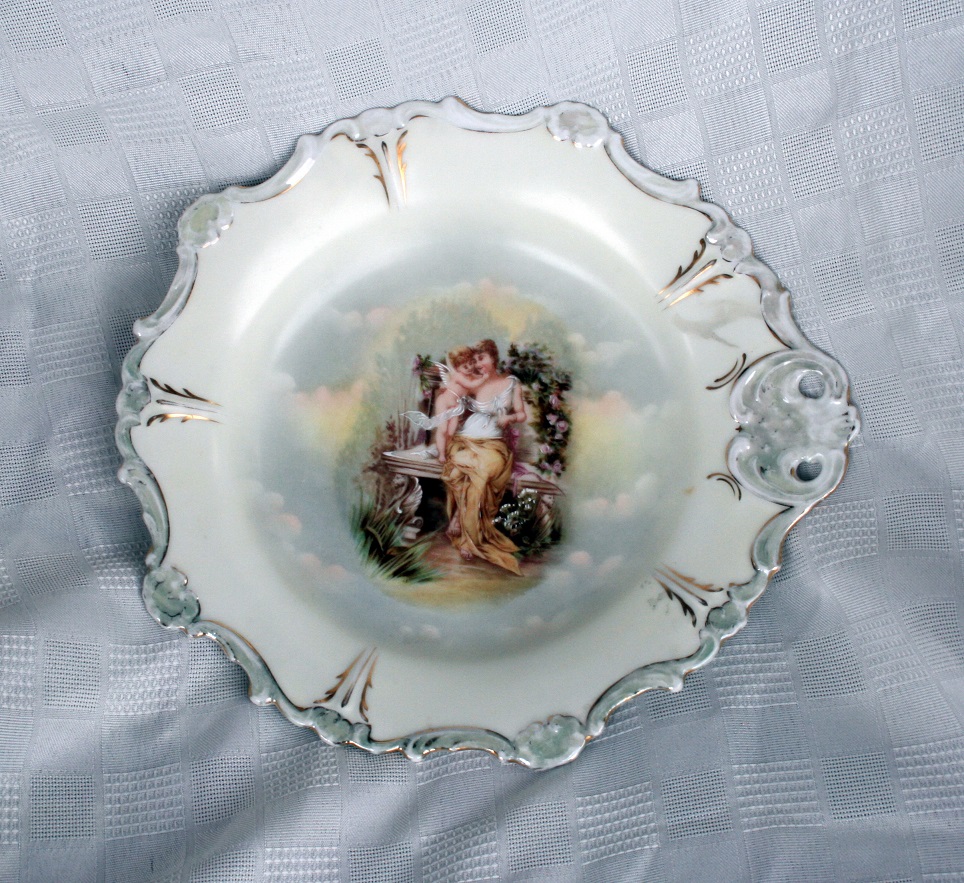 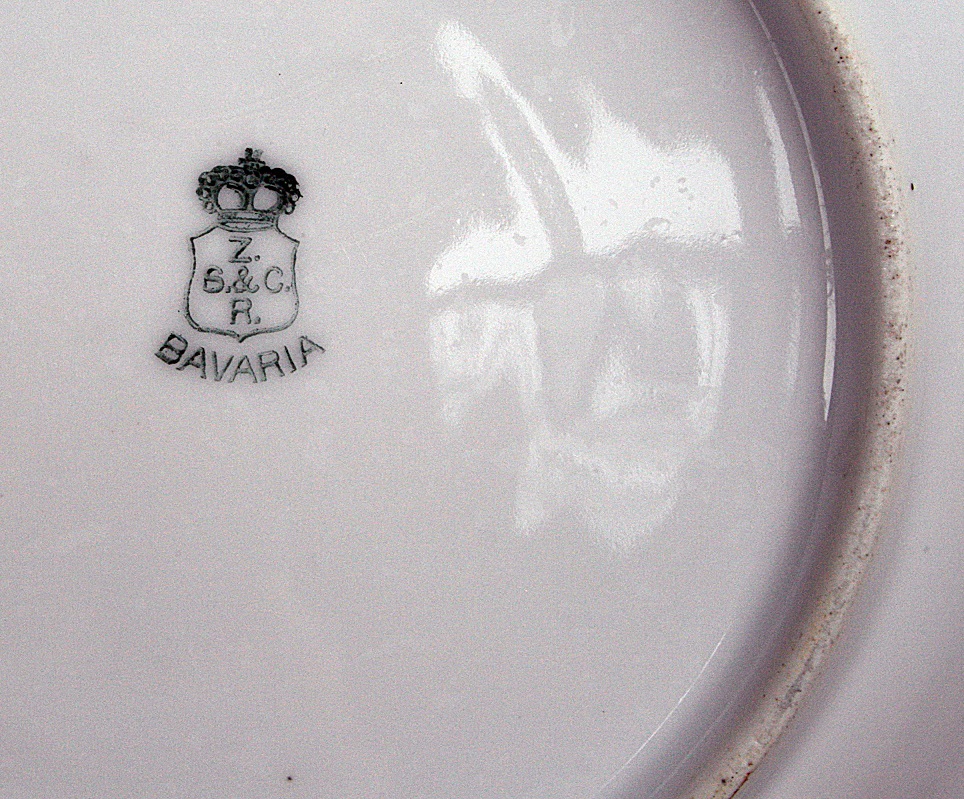 Robert S, if available. I have 3 plates marked Bavaria each with figurative illustrations for your review. The FIRST is a two handled plate, 10 1/2" diameter marked QUALITATS-PORZELLAN and Bavaria W Germany - the mark is blurred but I will provide a photo. The illustration is a man dressed like a troubadour playing an instrument to a seated woman who is handing him a flower. The gold on the face of the plate is worn off and the edges are pale green with some gilding. The SECOND is a single handled serving plate/bowl 9 1/2" diameter marked Bavaria with Z S&C R. The illustration is a woman seated on a bench with an angel and raised white paint on the angel wings and the woman's blouse. The plate is white with pale green and gold trim. The THIRD is a round plate with a central image and alternating images around the edges marked ARDALT No.9016 Bavaria Germany. The central illustration is a man with three seated women and sheep. The alternating image is a reclining man with two women and sheep. There is a cobalt ring around the central illustration. For each, could you tell me: (1) the manufacturer and style (2) something about the illustration (3) age (4) value. Thanks - John

Answered in 1 hour by:
Appraiser: Josie-ESA,  replied 7 years ago

Hi, I'm Josie and I am a moderator for this topic. I sent your requested Expert a message to follow up with you here, when he is back online.

Verified
Hi John!
Just letting you know I received your question.
I'll have an answer for you as soon as I can.
Many thanks,
Robert

This plate was made at the well-regarded porcelain works of Christian Seltmann founded in 1910 in the city of Weiden, Bavaria. The fact that the backstamp also includes the words "W.Germany" indicates a post-WWII date. The style is rococo revival with a C-scrolled rim in raised relief.

The decoration is a color print, or decal, adapted from an 18th century painting by the French artist Jean-Honore Fragonard,(1732 - 1806) whose courting scene reproductions were very popular throughout most of the 20th Century. Sometimes you'll be able to see a facsimile reproduction of the 'Fragonard' signature in the artwork.

(4) Value. These rococo revival serving plates are not as popular with collectors as they once were, I'm afraid to say, and values reflect this. The auction/eBay value is $15 - $20. Replacement/insurance value $40.

This plate was made at another of the reputable porcelain factories of Bavaria, known as Zeh, Scherzer & Co founded in 1880. This is an older plate, over a hundred years old, the backstamp dating it to the period 1899 - 1910. The style is also quite similar to the first, a rococo revival design with a foliate scrolled rim in raised relief.

The decoration is also a color print, or decalcomania ('decal' for short) but with some hand heightening and airbrushing of clouds and aura around the central scene which, in this case, is most likely an adaptation of the work of another 18th century artist, this time a Swiss woman by the name of Angelica Kauffmann (1741 - 1807) whose mythological scene reproductions were also very popular with Continental porcelain decorators of the day.

This plate is also Bavarian porcelain. The green & gold cartouche mark is a decorator mark, applied over the top of the manufacturer backstamp in order to mask it (a common practice at the time, so the maker of the blank would remain unknown, as decorators would source their blanks from many different manufacturers). The mark most likely belongs to Josef Kuba who operated a large decorating works in the town of Wiesau in Bavaria (having moved from Karlovy Vary in Bohemia before WWII). If so, the blank is most likely made by Carl Schumann in Arzberg, Bavaria, who provided most of the blanks for Josef Kuba during this post WWII period.

Ardalt were an American importer of tablewares and decorative china that emerged after WWII. It first appeared as ARDALT Inc. Corp.,95 Madison Ave, New York in 1945 and continued into the early 1960s. The principal countries of manufacture were Germany, Japan and Italy. The design is reproduction of the rococo style of the 18th century royal porcelain factory in Vienna.

The illustrations are also a number of color prints from another neo-classical artist, most likely the Frenchman Jean-Antoine Watteau (1684 - 1721) whose pastoral scenes are very similar to these.

As always, please feel free to ask questions or further explanation on any of the above,