Answered in 10 hours by:
Appraiser: Josie-ESA,  replied 7 years ago

Verified
Just wanted to let you know I got this and I'm working on it.

You should have the answer for the other one by now.

49. oriental vase 12" h see numbers on bottom - That's a Japanese vase with a brush style painting and what's probably a proverb on it. It has no mark on the bottom, so I'd say late 20th century. It has a modern styling to it. It should be worth about $30 to $40.

51. 13.25" h candlestick handcrafted in India - That's a brass and glass candleholder. They tend to call the pattern a diamond weave pattern. It's a later midcentury style (circa 70s or so). They were sold in pairs, but just one of that size isn't bad. It should have a value around $15 to $20.

54. one serving pkate 9" with 5 small bowls 5" diam Oremont Bavaria - Oremont looks to be an early 20th century dinnerware company out of Bavaria. They had quite a line of lusterware patterns. It looks like they were in business during the early 1900s before fading out around the 40s or so. The serving plate should be worth about $40 to $50 and the small bowls around $10 each.

55. blue and clear glass pitcher 4.5"h - That's a cobalt blue glass pitcher with a clear applied handle. The pattern is a pressed glass diamond point style pattern. It's a vintage piece...most likely from around the 60s. Overall the design looks like it might be a Pilgrim glass piece. It should be worth about $20 to $25.

56. Pitcher and bowl no marks pitcher 6"h and plate 9.5" diam - This is sort of an Asian style. I would bet it came from China or Japan. It has a very geometric paneled design. That's a style found more with Japanese imari and similar "copies" of that style. It's pretty interesting. I would say last 10 years tops. It's a transferware design with gold accents. The over all look is very modern and very artistic. I would put about $30 to $40 on it.

58. 4.25"h x 15.25" diam blue (is that milk glass because of the bumps?) bowl is 3 footed and quite elegant - Milk glass looks like milk--- white, thick, non-see through. Bumps would be kind of a hobnail pattern though the bumps aren't quite right. I did find it 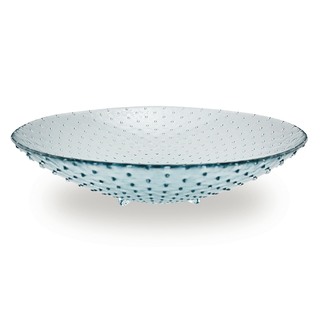 It's American made. It's called textured. There's no factory name though. It's worth about $20 to $25.

59. green glass platter handle to handle 12" octagon shape - This should glow under a blacklight. It should be Imperial Glass in the Twisted Optic pattern from the late 20s.


It glows because of the minerals in it. Uranium oxide content in the glass glows under a blacklight. Scientifically speaking, it's because the UV-radiation excites the electrons of the uranium atoms which makes it seem like it's glowing. The higher the Uranium oxide, the brighter it seems. This was pretty common in glassware during the 1920s.

60. picture 31.5 x 25.5 Blue throated Barbeis by Pat Moran - I think the bio is wrong. This should be by Pat Moran, the Australian artist. She specializes in nature images---flowers, birds, etc. Her work dates to around the 80s. The signature matches so, you might alter the label on the back. Her prints are worth about $50. That looks like it might be an original painting. Those are worth about $150 to $200. Make sure you look it over real good.

61. cup and saucer very pretty (sticker on bottom is torn and hard to read) - The label says Styled by Stafford. I think the name was a reference to the old English Staffordshire style, which fits the design. It's a midcentury company (circa 40s to 60s). It should be worth about $25 to $30 for the set.

62. oval pic 14.5x 12.5 lots of damage and mold is pic worth anything. Signed by Maude Eggmer or Eggmen - That should be Maude Kauffman Eggemeyer. She was an early 20th century painter from the Richmond Group, which was a group of Impressionist artist out of Illinois. She was born in 1877 and died in 1959. She's mostly known for her garden scenes and still life work. That's a nice Victorian styled couple. It does have some foxing in the print, but looks pretty good. It should be worth about $50 to $75.

63. Cherry Blossom picture with bamboo frame signed 18 x 17 - it's signed and has the publisher's chop mark. Problem is.. I don't know who it is. I'll admit..only about 1/20th ever get identified. It's a ink wash print from around roughly the 50s or so. Given that it's a later reproduction..you're looking at about $50 to $75 for it.

64. 24 x 20 signed Thomas Kinkade (client says it is worth $100) - Maybe. Generally the value depends on which edition you have. That doesn't look to be an artist proof or a numbered edition. So it's not super high in value. That looks like Sunset at Riverbend. It also looks cropped and missing part of the image. I'll be honest.. Kinkade prints are a hard sell. They're so mass produced and so full on the market that selling is hard. That looks a bit like the library edition. It's a decent version and a good frame. $100 is possible. I'd shoot for the $75 to $125 range and see if it moves at that.

Let me know if you have any questions..

Please Rate Me Only, not the Website or the values I provide.

I am a appraiser who uses this site to answer questions for customers who come here. I do my very best to offer you the most current values using the latest guides and recorded sales and any information I can find for you.


Please keep in mind I am only credited for my answer if you rate me with at least 3 stars or 3 smileys and above. If you feel the need to use a lower rating which adds a negative mark to my profile, please use the blue continue the conversation link instead - and tell me what else I can do for you to improve my rating.

You do not have to choose a rating in order to continue our converstion. You can just click the blue continue the conversation link if you want to reply to me.

Have a great night.

Diana F.
Antiques Expert
Bachelor's Degree
13,583 satisfied customers
Show more
Disclaimer: Information in questions answers, and Show Less
Disclaimer: Information in questions, answers, and other posts on this site ("Posts") comes from individual users, not JustAnswer; JustAnswer is not responsible for Posts. Posts are for general information, are not intended to substitute for informed professional advice (medical, legal, veterinary, financial, etc.), or to establish a professional-client relationship. The site and services are provided "as is" with no warranty or representations by JustAnswer regarding the qualifications of Experts. To see what credentials have been verified by a third-party service, please click on the "Verified" symbol in some Experts' profiles. JustAnswer is not intended or designed for EMERGENCY questions which should be directed immediately by telephone or in-person to qualified professionals.