Answered in 9 hours by:
Appraiser: Josie-ESA,  replied 6 years ago

65. 16.5”longx4.75” w clear bowl with gold trim pretty heavy – That’s a molded glass console or centerpiece bowl with gold trim. I believe it’s a Gondola bowl by Jeanette glass. It’s part of their Antique classics series from the 50s and worth about $30.

66. 10.25h heavy vase - hat's a pressed glass diamond and stars pattern. I believe it's an Anchor Hocking Prescut piece from the 60s or so. The pattern was started in 1960 and still being produced. The vases are worth about $20 or so.


67. 6.5h ?crystal med heavy pitcher – That’s a water pitcher in what I think is a pineapple pattern but I’m not sure of the maker. It should date to around the 50s or so. It’s similar to old oatmeal glass----the kind you could get by Anchor hocking. Based on the size..that could be a creamer. It would be worth about $15.


68. four peach with flowers shades 5”h - Those are 1960s era pieces. They’re ruffled flower form style shades. The flowers are a transferware style, not handpainted. They’re a chandelier or scone style shades and should be worth about $10 a piece.


69. crystal decanter 12”h heavy – It’s a bit of a diamond pattern. The shape is a bit odd---as is the footed base. Given the look, I want to say Waterford , but it’s not in their catalogs. It’s a higher end piece, but not marked…so think 2nd tier… like maybe Stuart or Goddinger. It has a nice cut, a good shape, and the stopper looks more quality than your average glass piece. I don’t think it’s that old---last 20 years or so. It should be worth about $40 to $60.


70. smoke vase 5.5-6” h – That’s a fishbowl style glass vase. The color is smoke. It’s a swirl pattern . Tho closest match would be anchor hocking, but they didn’t make a vase like that. I would say it’s a late 20th century blown glass piece in that retro style. It would be worth about $15.


72. 3 footed candy jar with lid 9”h crystal – That’s a footed lead crystal candy dish with a tall finial, a sort of fan pattern with pinwheels and starbursts. I found copies but no maker name. It looks to date from about the 70s. It looks to be a from a giftware line. It’s worth about $15 to $20.


73. compote? Not heavy ?glass 8”h – That’s a glass compote with a sawtooth edge. I see a braid pattern, diamonds and starbursts in a button design. McKee made some similar patterns, but their pieces don’t have quite that variation in the design. Overall….It’s Early American Pressed glass and should date to the early 1900s and be worth about $40 to $50.


74. ginger jar 8”h Japan – Nice Iris design. The characters are similar but not any used from a major company. The mark is similar to Sanko Toen, but not exact. It’s a double borded stamped mark, which means a later piece. Given that it just says Japan and not “made in”, it should date to about the 60s. It’s in good shape with minimal crazing and no damage I see. It has the shape (w/pointy lid) that typically call an urn style vase. It has a brushwork design instead of traditional Japanese designs. I would say it was meant for export and worth about $30 to $40.


75. sugar bowl Noritake #5852 ‘Wheatcroft’ FYI there is more Wheatcroft later on..it wasn’t packed together and I thought this was a misc pc. So indvid. Price is fine ty


76. 9”l dish heavy for its size – That’s an anchor hocking prescut gondola bowl from about the 60s/70s. It should match your vase. Some call these cranberry or relish dishes. I like gondola. It’s worth about $15.


77. 2 vases 7”h gold trim with flowers and mop with no marks ‘waterfall’ vases? How am I doing so far with my guessing? You are such a good teacher - Thank you! Those are pretty. They’re lusterware. That’s why they have that pearl like finish. It’s a bit of a waterfall style. I think it was made by Kass. Look at this: 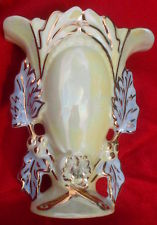 
78. teapot 7”h made in China white with black flower. I love this teapot—he says he has more of the set and will find it later so I guess the value of the pot for now – Neat piece. It’s a sort of abstract, silhouette design. The shape is a midcentury modern design—circa 1960s. They also call this atomic styling. Very cool design. I’d put about $40 on that at least.


79. 9 soup bowls ‘Suzy’ Japan Fine China #3101 – That’s a discontinued midcentury design from a company that is no longer in business. In fact, I think they were only around during the midcentury (around the 30s to 70s or so). The soup bowls from the Suzy pattern are worth $10 to $15 each.

80. teapot with flowers 6”h Signature collection Japan Oriental Garden 118 – Signature Collection is the brand name… Oriental Garden is the pattern. It’s a midcentury pattern and long since discontinued. You don’t see the teapot often. It’s worth about $20 to $25.

Diana F.
Antiques Expert
Bachelor's Degree
12,116 satisfied customers
Show more
Disclaimer: Information in questions answers, and Show More
Disclaimer: Information in questions, answers, and other posts on this site ("Posts") comes from individual users, not JustAnswer; JustAnswer is not responsible for Posts. Posts are for general information, are not intended to substitute for informed professional advice (medical, legal, veterinary, financial, etc.), or to establish a professional-client relationship. The site and services are provided "as is" with no warranty or representations by JustAnswer regarding the qualifications of Experts. To see what credentials have been verified by a third-party service, please click on the "Verified" symbol in some Experts' profiles. JustAnswer is not intended or designed for EMERGENCY questions which should be directed immediately by telephone or in-person to qualified professionals.