Answered in 10 hours by:
Appraiser: Josie-ESA,  replied 8 years ago

I'm just picking your two questions up, but I wanted to make sure you knew that I did see them. I've been pretty much out for a few days with what I think is a cold or something. I'll be back in the morning and playing catch up.

Appraiser: Diana F., Antiques Expert replied 8 years ago
I'm working on it. I'm not the only one with it so either it's a horrible allergy attack from spring finally starting or I picked up a cold. Either way... boo. lol

I'm working on it. Thank you for the get well wishes =)

Well I was going to send flowers but with the allergies.......?????? thought that might not be a good idea

78. grey and clear decanter 13"h - That's blown glass decanter. The color is usually considered smoke. It's most likely Italian from around the 1950s or so. It looks a lot like Empoli. It's a very cool free form design. It should be worth about $50 to $75.


80. urn strawberries 12"h Western Germany on bottom and A t H - I think that's actually a Cross with an A and H. I found the mark, but no record of who the factory is. Western Germany places the date from about 1949 to 1990. I would say it's from around the 60s. It's a strawberry urn vase. It's a good quality too. The crazing is more for look than the glazing breaking down. It makes it look older than what it is(which is the point). It should be worth about $40 to $50.


84. egg cup made in France Cordon Bleu B.I.A France 3.25"h - BIA Cordon Bleu was started in 1952. They produced porcelain and stoneware. They produced what is basically restaurant grade. Based on the mark... it should date to around the 70s/80s or so. An egg cup is worth about $15. 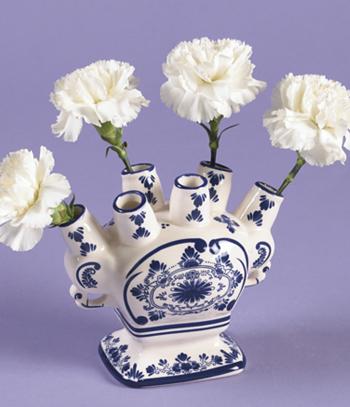 It's advertised as more giftware. It's worth about $15.


87. 5"h teapot Printemps fine china Japan - Fine China Japan is actually listed as the company name, but records are pretty off about it. Some list it as a description more than company name. I think it's actually the trade name of the company personally. For one reason...I find about 40 patterns under that name. Printemps is your pattern. It dates to about the 60s/70s or so. A teapot is worth about $40 to $50.


88. blue and pink pot 7.75"h 10" dia - That's a fish bowl pot. The mark looks like Zhong Guo Zhi Zao. That basically means China Made. It was used around the 50s which would fit the style. It has a bit of a familie rose color scheme, which used mainly blues, pinks and purples. It should be worth about $75 to $100 and I'd definitely shoot for higher end of that scale.


89. crystal vase 8.75"h - That's an art deco motif on that. It's a bit of a chevron or herringbone style. I can't find the maker though. It's similar to Davidson glass but there's wasn't quite like that. Overall.. It should date to roughly the 40s or so. It should be worth about $25 to $35.


90. crystal vase 7.5 "h - That does look like lead crystal. It's a wild rose and what looks like a diamond pattern. I don't think it's a regular American company. It looks more like a piece of Bohemia glass (Czech) from the late 20th. The cut and look is more of their lead crystal style. It should be worth about $40 to $50.


91. crystal vase 9.25"h - That's more midcentury American style. It's a fluted diamond pattern with a sawtooth rim. Kinda reminds me a lot of hoosier but they didn't really used a sawtooth edge like that. It should be worth about $25 to $30.


92. two small tidbit? china dishes no marks 6.5" long each - Those are bone dishes. I would Japanese from the mid 50s or so. They look similar to Lefton, Ucaggo, companies like that. They'll be worth about $10 each.


I hope this has been helpful to you. I do my best to offer you the most current values and information using the latest guides and recorded sales.

Have a great night.

Even though it still says "responded" does it still give you the option to rate the answer when you open the email?

Diana F.
Antiques Expert
Bachelor's Degree
14,072 satisfied customers
Show more
Disclaimer: Information in questions answers, and Show Less
Disclaimer: Information in questions, answers, and other posts on this site ("Posts") comes from individual users, not JustAnswer; JustAnswer is not responsible for Posts. Posts are for general information, are not intended to substitute for informed professional advice (medical, legal, veterinary, financial, etc.), or to establish a professional-client relationship. The site and services are provided "as is" with no warranty or representations by JustAnswer regarding the qualifications of Experts. To see what credentials have been verified by a third-party service, please click on the "Verified" symbol in some Experts' profiles. JustAnswer is not intended or designed for EMERGENCY questions which should be directed immediately by telephone or in-person to qualified professionals.