Answered in 59 minutes by:
Appraiser: Josie-ESA,  replied 7 years ago

Hi, I'm Josie and I am a moderator for this topic. I sent your requested professional a message to follow up with you here, when she is back online.

While I'm waiting to hear back on that one, I'll get started on these. =)

I hope you got them I put them at the top at the time and sent you a mess like I am typing on now...did yu get um??

also asked you how to clean somethingl

Appraiser: Diana F., Antiques Expert replied 7 years ago
I did. I got all your messages (I think). =)

49. Plate 3" sq Denmark pls read the back of plate in the pictures - That's a Bing and grondhal plate. It was designed by Kjeld Bonfils. Storkereden is a location in Denmark. The numbers are a pattern/inventory reference. There were actually a lot of these miniature plates. There were about 6 in the series. Each plate in the series runs about $5 to $8 each.


50. 3 ½" diam plateLangelinie..girl on rock pls read back of plate - That's a Royal Copenhagen plate. It depicts the little mermaid statue that watches over Langelinie harbor in Copenhagen, Denmark. Based on the number it dates from around the 70s. It's worth about $10.


51. 3 ¼" diam plate Denmark pls read back of plate - That's another Royal Copenhagen plate. That's an older beehive mark. The little mark on the bottom is the artist mark. It's Kaj Lange, an illustrator and designer at Royal Copenhagen from 1919 -1983. He designed plates, lamps and vases. The plate is worth $6 to $8.


52. Figurine 5"h - It says Hand Painted M/K Design Registered. From what I show..it looks like they were an artware and giftware company from around the 50s. Most of what they made were figurines. I found musical sets, nuns, old men, etc. and most have a slight cartoonish flair to them like yours. It should be worth about $8 to $12.


53. 6 silver plate goblets Salem Portugal before and AFTER shots (tarnished and cleaned) 3 ½"h - They date from about the 1950s. Salem is the maker. Portugal is where it was made. There were a tall goblet and a champagne glass that came in this series-----usually sold in sets of 4 to 8 place settings. For a set of 6---- they should be worth $40 to $50.


54. 3"h..dish silver plate tarnish protected (balogna) made in Japan - That's a silverplate pedestal bowl. It's made in Japan and dates to about the 60s. The actual company.... Holiday Imports Inc was out of San Francisco. It's a dogwood/floral motif. That's very reminiscent of the old early 1900s Reed and Barton and similar styles. It should be worth about $20 to $25.


55. 6"h wood (candle holder?) - That's a pretty grain pattern. It held a big fat pillar candle. =) These were popular round the 60s/70s. They sell them these days as vintage rustic modern. Pottery Barn makes a killing off them. The style of yours really looks like a hand-turned, hand-crafted artisan style. It's a pretty look. It should be worth about $30 to $40.


56. Boyertown PA U.S.A. and Coles Brookdale Iron Co let me guess...hmmmm...maybe an iron?? Weighs 4 ¼# XXXXX Yup Iron. You must be physic. =) It's an iron. . Colesbrookdale Irons was started around 1835 and was sold around the 30s or so. They were originally known for irons and trivets. They call them sad irons (which is an old way of saying "soild iron" or "heavy iron"). The term goes back to the middle ages when they first started using the old flat irons. They had to withstand fires. =) It dates to around the 1920s


57. Corday dish 5 ½"x4 ½" - Corday is sometimes spelled Cordey. They were a midcentury giftware company. Much of their ceramics look a lot like Lefton's pieces. That should be a pin dish. It's worth $30 to $40. 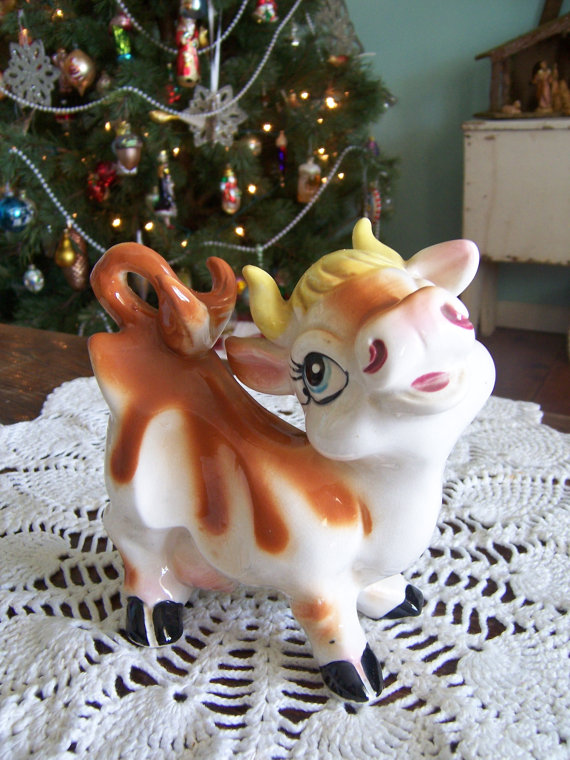 
59. Candlestick 2"h - O.P.Co. stands for Onondaga Pottery Company. Syracuse China/Onondaga Pottery Company was founded in 1871 when a group of investors bought out the W.H. Farrar Pottery Company of Geddes, NY. They produced a lot of restaurant and railroad dinnerware. Any Syracuse pieces marked with that are pre-1966. Given that it has both, they should date from about 1897 to 1946. The mark is a personal crest. It looks like it might be for a business---like a restaurant or hotel. Most won't know that since it's not out-right labeled. It has the advantage of having a cool looking crest. That will help. =) It should be worth about $10.


60. Lenox Holiday candlestick 3 ½" - Holiday is also called Dimension. It was started in 1974 and is still in production. The small candle holder is worth $3 to $5.

61. Fenton coaster 1987 Austrailian Victoria Ace 3" diam - Both 61 and 62 were part of a souvenir pattern. They were collected by carnival glass collectors. They were part of a set produced to celebrate milestones. The Coasters, Magpie plate and Bells were made by Fenton Glass Co.
in the history of the Australian Carnival Glass clubs. For the most part, the values run about the same and they're worth $35 to $40.

64. Salt thing 3 ½" x 2 ½" chips on top inner edge - that's a neat starburst pattern on the salt cellar. It's from about the 40s. Most of these are usually paneled. You don't see completely round ones as often. With the chip on it...it should be worth about $8 or so.


Let me know if I missed anything. =)


Please keep in mind I am only credited for my answer if you rate me positively. If you feel the need to use a lower rating which adds a negative mark to my profile or if you have any further questions about your item please feel free to reply to me and tell me what else I can do for you.

Have a great weekend.

Diana F.
Antiques Expert
Bachelor's Degree
13,258 satisfied customers
Show more
Disclaimer: Information in questions answers, and Show More
Disclaimer: Information in questions, answers, and other posts on this site ("Posts") comes from individual users, not JustAnswer; JustAnswer is not responsible for Posts. Posts are for general information, are not intended to substitute for informed professional advice (medical, legal, veterinary, financial, etc.), or to establish a professional-client relationship. The site and services are provided "as is" with no warranty or representations by JustAnswer regarding the qualifications of Experts. To see what credentials have been verified by a third-party service, please click on the "Verified" symbol in some Experts' profiles. JustAnswer is not intended or designed for EMERGENCY questions which should be directed immediately by telephone or in-person to qualified professionals.