DianaF: Im gonna take a chance you have frozen up yet...if…

Answered in 22 minutes by:
Appraiser: Josie-ESA,  replied 7 years ago

Hi, I'm Josie and I am a moderator for this topic. I sent your requested professional a message to follow up with you here, when she is back online.

We're bit frozen it, but still have power so far. =) We got about 2 inches of sleet/ice. That I can deal with. Highs of 27 and lows of 8 on top of having ice, I can do without. lol. Hopefully you're just cloudy and don't have bad weather on top of it.

I'll take a look and get started.

well weather wise it is cold windy and rain on the way....

Do you have those handy?

Well..that's because I was trying to clean them and forgot to get the pics. Can I use lime-away on the caps...they are gross. Last night I soaked them in vinegar and salt and it didn't help

Lime-away can pit softer metals if you're not careful.

This site has one of the best lists of cleaning methods for about everything:

As far as yours go, they look like they might have been zinc or aluminum. Zinc is usually cleaned with fresh lemons. Literally, you cut a lemon and rub it on it or leave it soaking in the juice for about a minute or 2, then wash it with mild soap and water.


For aluminum you can take 2 tablespoons cream of tartar dissolved into 1 quart (1 liter) water. Bring the mixture to a boil inside a pot, put the lids in and boil for 10 minutes.


34. '31 Doozie and I have two '37 Bugatti's - These were also part of a Treasure Hunt series. Yours are referred to Blue Card versions because of the packaging. The Doozie is worth $5 to $10 and the Bugatti is worth about $4 to $6.


35. #1 and #4 of a set of four Team-Ford Racing...Deuce Roadster and Ford GTX1 and I also have 40's Woodie (older pkg) I remember having a woodie when I was a child ! - For the Ford Racing ones---they're worth $1 to $3 each. The Woodie is an old 80s version Hot Wheels car. This set was called HiRakers because the rear axles could be Raised or Lowered. It's worth $3 to $5.

Your family had a real Woodie car?


#3 I thought these were a pair but the one on the left has a hand painted look kinda like sponge painting and the one on the right has a floral design 4" high . - The one on the right looks like textured glass with a plastic lid. It actually look like a set of Imperial shakers from around the 40s. It also look a bit like Hazel Atlas' Royal Place. It should run about $10. The other looks like it was flashed or frosted and is flaking a bit. I don't show anything like that in any of my books. It's a bit of an oddity. I'd put about $10 on it just for unusual factor.

This is interesting. I've seen the same big pig as a bank. 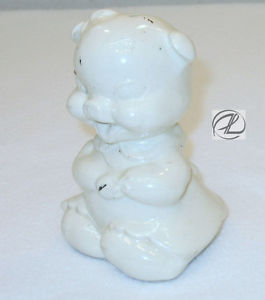 I think she think's it a cotton ball dispenser from the 30s/40s. Given the holes and placement...she's very likely right. =) It's worth about $25.

The salt/pepper shakers look like Shawnee knock offs from about the 40s. They're adorable. The blue paint is a bit worn off in places, but overall...cute. They should be worth about $15.


39. Cup only 2"h Simpson's Ambassador ware..England - Simpson pottery was originally Soho pottery. It was started around 1944 and closed down in the late 1970s. Ambassador ware was the pottery line. The pattern should be Hampton Court. For just a cup ...it's worth $4 to $6.


41. Salt thing 3 ½"x2 ½"x1 ½" h - That's a depression glass salt cellar from around the 30s. They're fairly common and almost impossible to accurately ID, but most collectors don't care. =) Looking at the style and pattern it should be worth about $10.


43 tag says sugar cube tray 6"x2" - It is. It's a Sugar Cube Tray (Holder). They were very popular during the Victorian Era. It's most likely silver plated. The design is called Reticulated. Some call it pierced. Frank Whiting made a lot of these. It should date to the early 1900s. It should be worth about $30.


44. 6 ¼"h - That's a beautiful ball stem wine glass. It's a ball stem with a ribbed design and etched flowers. It's very similar to Tiffan from late mid century. It's called elegant glassware. A wine glass of that size should be worth about $20 each. It's not unheard of to get $25 or even $30.


46. 3"h -That's a green hobnail style compote. It's also unique in that the outside is almost more like points than traditional hobnail. It's very similar to Fenton, but the way it's broken up in a ribbed design is more like something napco did. I'd put more money on it being an import piece like theirs than a major company like Fenton. It should be worth about $25 to $30.

Please keep in mind I am only credited for my answer if you rate me positively.If you feel the need to use a lower rating which adds a negative mark to my profile or if you have any further questions about your item please feel free to reply to me and tell me what else I can do for you.


When you get the survey in email please consider filling it out.These ratings should be based on my professionalism and courteousness to the customer. I am not responsible for any issues with the site or any values that are not as high as expected. I cannot control either one. Thank you so much!

Have a great day!

Diana F.
Antiques Expert
Bachelor's Degree
13,080 satisfied customers
Show more
Disclaimer: Information in questions answers, and Show More
Disclaimer: Information in questions, answers, and other posts on this site ("Posts") comes from individual users, not JustAnswer; JustAnswer is not responsible for Posts. Posts are for general information, are not intended to substitute for informed professional advice (medical, legal, veterinary, financial, etc.), or to establish a professional-client relationship. The site and services are provided "as is" with no warranty or representations by JustAnswer regarding the qualifications of Experts. To see what credentials have been verified by a third-party service, please click on the "Verified" symbol in some Experts' profiles. JustAnswer is not intended or designed for EMERGENCY questions which should be directed immediately by telephone or in-person to qualified professionals.