Have you been sick? I hope it's nothing too serious.

I'm good. Ready for the holiday weekend. How about you?

I got these and I'll get started.

DianaF: well I hurt my leg but it is getting better ty for asking. I'm just going to get caught up on my things this w/e and how about your w/e plans?

No major plans. I'll be doing pretty much what you're planning. I'll be using the fact that we'll have fewer questions coming in to finish up house projects. We've been repainting and building new gardens and planting, so the plan is to get that all finished.

You'd better be taking it easy.

1) Since there are no marks or labels, it's hard to say who made it, but it looks like a early to mid century era lamp. It has a tapered box design and metal base. It's almost a regency style. Around the 30s/40s the faceted style was pretty popular as were simple floral arrangements. 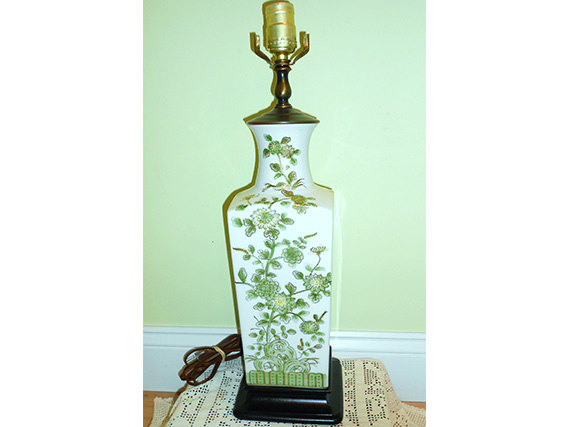 Normally they came in pairs. They would have a secondary value in the range of $75 to $125 for each lamp.

3) Takahasi was an import company out of San Francisco. There were actually a smaller trade name of Kutani Centric Purchasing Office (a major exporter). There items were often sold on military bases and shops. That should be a 70s / early 80s piece.

5) Baum Brothers is an import company out of NY. They import many from the Czech Republic. They date to about 1950 and are still in business. Formalities is a relatively new "brand" they've put out. It's an assortment of giftware, accessories, figurines, plates, and teaware. They started it about 2000 and it still runs. The pattern doesn't have an official name, but it's called Pink Roses with Green Leaves. It is discontinued. The teapot values in the range of $40 to $60.

6 and 7) It's similar to Blue Onion. Blue Norkin was Meakin's answer to original Miessen and later Japan Import patterns called blue onion. Meakin's was very popular in the 1960s. The cup and saucer sets are worth $5 to $10 each

8) Irritating huh? Chantilly is usually bears and musical animals. Not so much people. They sing and dance. Gram's Cracker Guys is actually still in production. There's a grouchy woman too. They're part of a"grumpy" line. They have about 4 different t-shirt designs too. They have 2 in that immediate series and about 4 others that are similar. He's worth about $15 to $25.

9) Linens are hard to date. The patterns look to be pretty basic and nothing too extravagant. They're most likely hand crocheted. Odds are they actually came in the neutral colors and haven't "aged" and turned more brown. Cotton sells better than nylon ones and gets higher values. They look early to mid century. Bascially you're looking in the range of about $5 to $10 for small nylon ones, $8 to $12 for small cotton ones, around $30 for table runners, $20 to $40 for large nylon ones, $30 to $50 for large cotton ones, and extra large ones can value as high as $75 to $100. If they have a lot of embroidery or embelishments, you can add about $15 to $50 to the overall value (depending on the size--- $15 for the smaller ones and up to $50 for the really large ones).

10) Shofu is a dinnerware company out of Japan. They were based out of Nagoya Japan. They date back to about 1920 and most records stop right around WWII. Your mark looks like what was used around the 40s. They did a lot of handpainted designs and scenes similar to what Noritake and similar companies were producing at the same time. 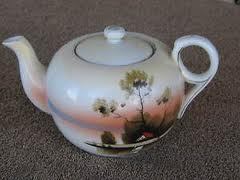 11) That's cut glass bell. I see a fan and diamond pattern. It looks like a Bohemia (Czech) crystal piece. 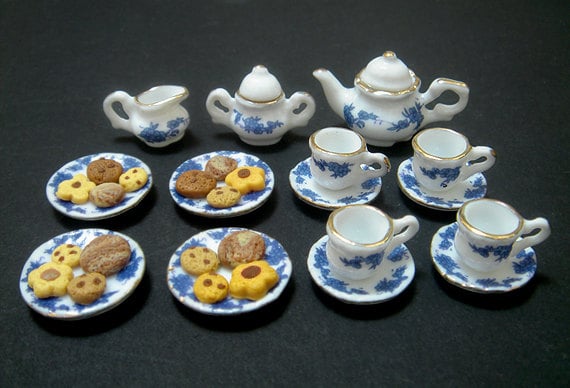 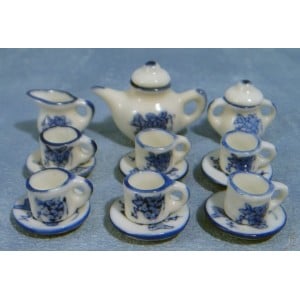 They have that "thicker" look to the handles and lids. That shows that up on miniature items because it's super hard to create super fine handles and detail when you're working that small. I would say it most likely came out of Japan or China during the 70s or so. It should have a value around $15 to $25 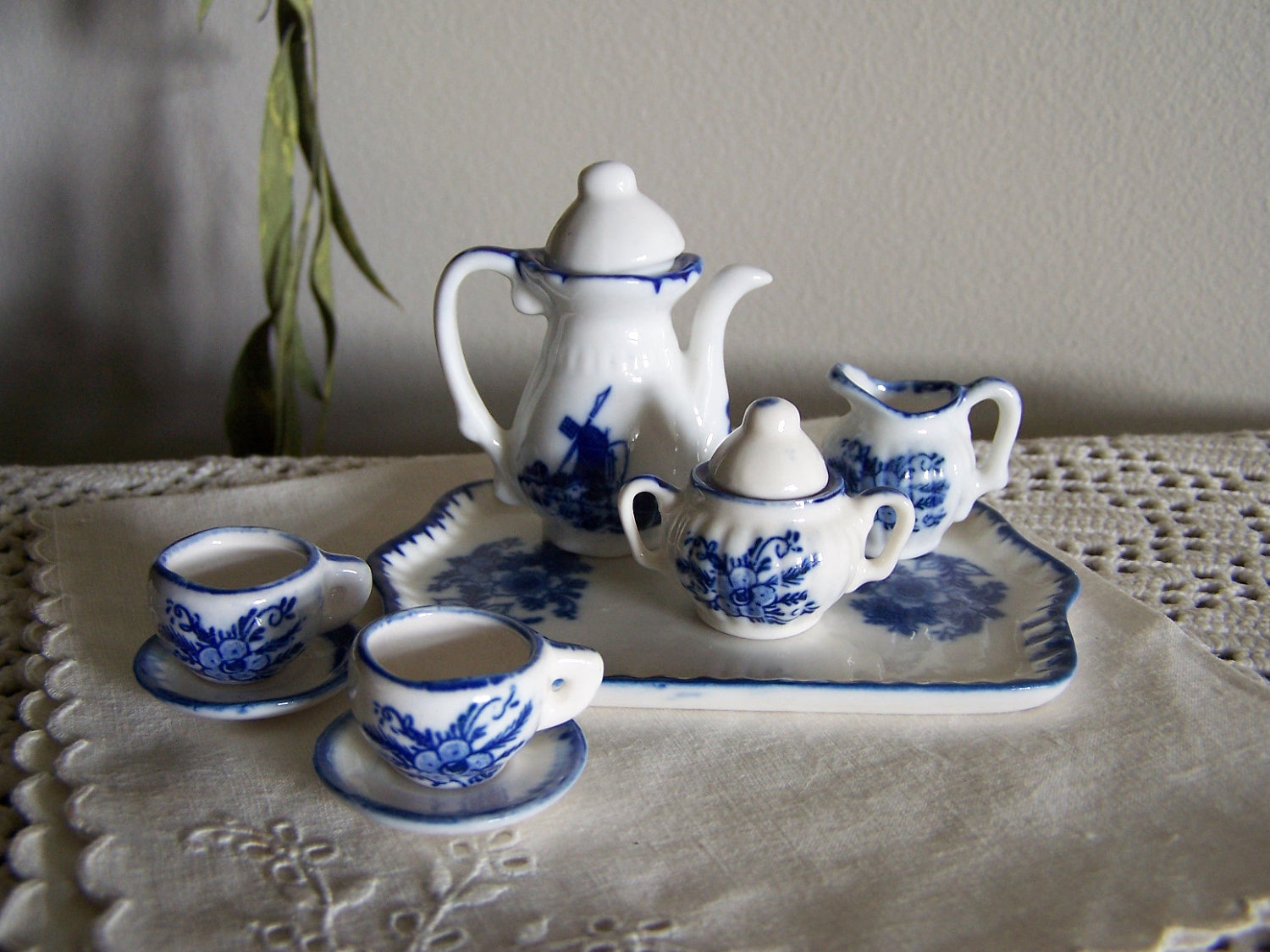 Supposedly this pattern was actually made in Holland during the 1960s. The windmills actually run a bit higher--- $20 to $30 for the set.

14) With an Occupied Japan mark you know the date--- about 1947 to 1952. It actually looks like a Saki cup/saucer set. It's not a real busy pattern. It's a very clean simple mid century design with gold trim. 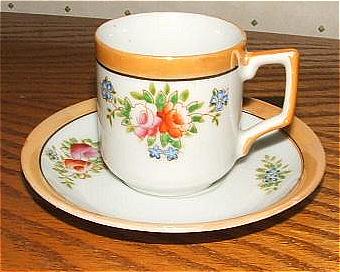 15) these were made in 1994 to celebrate the 125 anniversary of major league baseball. Each team got a patch and balls were printed with the individual team logos. You could get them at sports shops or at the games. I wager yours probably came from the ball field. =) They're worth about $5 to $10

If you find any goofs let me know.

Have a great night
Diana

Diana F.
Antiques Expert
Bachelor's Degree
13,258 satisfied customers
Show more
Disclaimer: Information in questions answers, and Show More
Disclaimer: Information in questions, answers, and other posts on this site ("Posts") comes from individual users, not JustAnswer; JustAnswer is not responsible for Posts. Posts are for general information, are not intended to substitute for informed professional advice (medical, legal, veterinary, financial, etc.), or to establish a professional-client relationship. The site and services are provided "as is" with no warranty or representations by JustAnswer regarding the qualifications of Experts. To see what credentials have been verified by a third-party service, please click on the "Verified" symbol in some Experts' profiles. JustAnswer is not intended or designed for EMERGENCY questions which should be directed immediately by telephone or in-person to qualified professionals.