Hi Robert , I have a framed 1831 Silhouette to be appraised…

Hi Robert , I have a framed 1831 Silhouette to be appraised , History is on the back .

Let me do a little research and get back to you. I'll have an answer when you wake tomorrow.

Hope you are doing well!

Have a great night (my day is just starting!)

Hi Robert , Got the message , no rush i can wait .

How long do you think i sleep for ?,or did you mean the following morning .

Yes i am doing well thank you and you .?

Your day is just starting .doing anything special ?

Haha notice i an keeping letter short this time . Don't want to exhaust you !.

Oops I think I missed a day. I can't get my head around all this time difference arithmetic, it's too confusing. Anyhow here I am again.

Silhouette of a Gentleman. The artist is Charles Rosenberg (1745-1844) who describes himself thus on many of his paintings:

"Profile painter to their Majesties, THEIR ROYAL HIGHNESSES The Prince and Princess of Wales, AND THE DUKE AND DUTCHESS OF YORK,"

He lived at Number 14, Grove, Bath, at a time when Bath, in the south west of England, became the height of fashion among high society and royalty as a destination to "take the waters" and "see and be seen".

Rosenberg had close ties with the royal family having come to England as a page to Princess Charlotte of Mecklenburg-Strelitz, later Queen Charlotte and wife of George III. He became very well known in his day for his perfect caricature miniatures of the wealthy and the famous.

The other locations mentioned in the note on the back are Wetherby, a market town in west Yorkshire in the north of England and Boston Spa, a small neighboring village. So it is not surprising that a miniature painting that used to belong to someone in living in Boston Spa would end up in an antique shop in Wetherby nearby.

Both locations are a long way from Bath, which is irrelevant because society traveled to Bath from all over England at that time. Neither would give any indication as to who the 'sitter' actually was.

The last piece of information: rec'[eive]d with [undecipherable] from A.York Esq, April 1831 is the only possibly helpful connection with his identity which, sadly, will have to remain unknown, as is the case with so many of Rosenberg's subjects.

This date could be a little later than the date it was made. This is very much a Regency period style of miniature, with attire typical of the 1820s with the high collar and cravat.

Charles Rosenberg painted his images onto the reverse side of the convex glass and backed the painting with plaster of Paris. The frames were usually made of papier-mâché which was then gilded, which I am sure yours is.

Rosenberg miniatures are still highly collected and valuable though interest in them has softened somewhat.

This one of an anonymous gentleman sold at auction in London 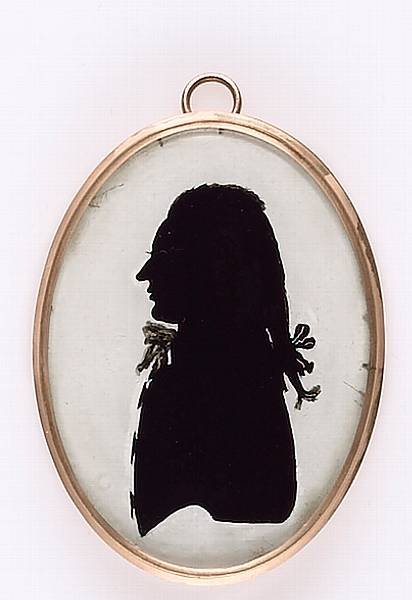 for $425 which is about right for yours.

The insurance value would therefore be at least $1000.

What a lovely little time capsule of history this painting is.

Verified
Robert S. and 87 other Appraisals Specialists are ready to help you
Ask your own question now
Customer reply replied 8 years ago

Hi Robert , Just letting you know i am having a problem on this end ,takes 2 min to lode your page , and again i have to write because other letting must not have went through.

I hope you relize that something must be wrong this end , No tip not like Eva .

That is right i went to tip you and said ''access denied '' .

so i will tip you double on next Q on silhouette.in next letter .

thank you for all the great information .

Robert sent another Q please let me know if went through . thank you Eva

Okay I see your other Q. Thanks!

Sorry about the slow down on the site. It is happening to me too. Not sure what's causing it. Probably not enough Greenland mushroom oil lubrication.

Thank you , i can relax now , i still feal pretty bad for not tipping .hope all goes well next tip .

I'll give it oil lubrication alright , straight through the window .

You go girl! Lubricate away!

You are very sweet to be concerned about the lack of tip, I do appreciate it, and don't worry even if you can't make it up on the other.