I have Silver Dollars, Brilliant, Uncirculated and was 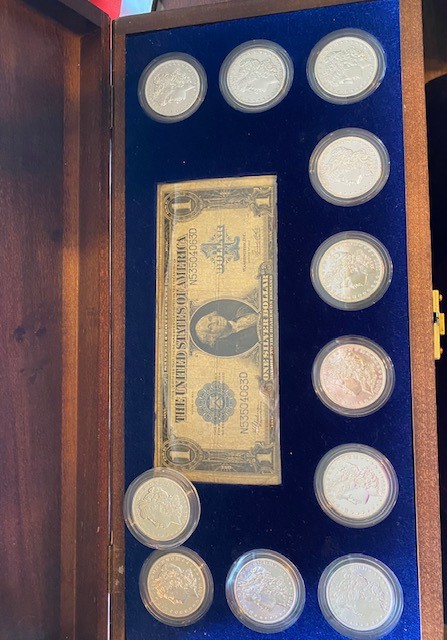 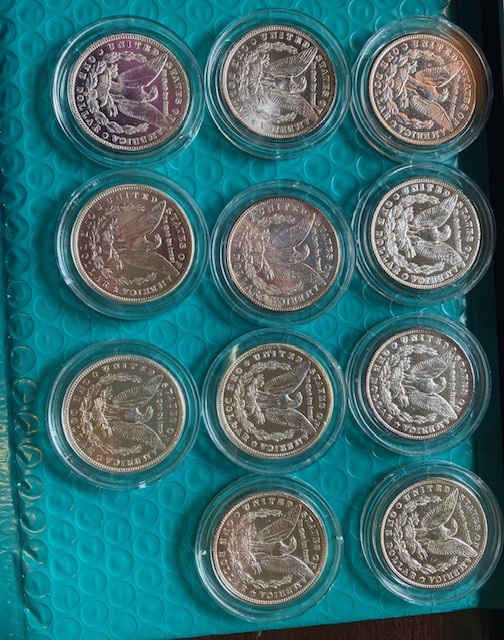 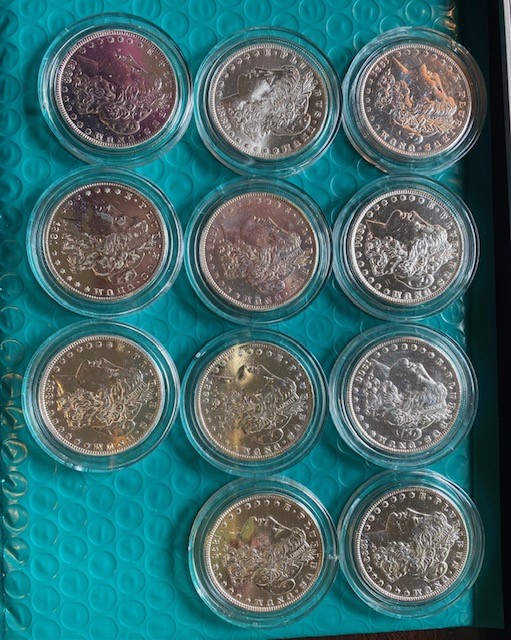 We experts are not site employees and as such must adhere to site guidelines. We're not allowed to address more than approx. 4 items in one post. If you agree, I'll look at what you've posted and try to address the ones I feel are more significant.

- Or - you can list the 4 you think are more significant

Are these all uncirculated, mint condition? Do you have provenance on them (how did they come to be with you and when, etc) ?

I understand your frustration with internet searches and prices. There are a lot of frauds, cons and scams out there with regard to coins and paper money.

Once you respond please be patient. I've been dealing with some site 'glitches' all morning - freezing - being thrown off the site - just a bunch of frustration !

Customer reply replied 1 year ago
They are all uncirculated - inherited from my Father. They are in mint condition but not certified.

They are beautiful! The reason I had to ask is because some fly-by-nights have offered a similar and almost identical set in recent years with the tiniest print in their ads indicating they are "silver clad" reproductions. Meaning cheap metal with a microscopic, worthless amount of liquid silver sprayed over them.

This will take a few minutes for me to look them over, enlarge them and then get you today's (current) values.

I may need to ask you some questions - especially if I can't enlarge large enough to see clearly. The side most important to me is the 'flip side' - the side with the eagle.

Hang with me ok?

Customer reply replied 1 year ago
Absolutely, thank you for the help

OK - yep, need your help. The eagle side of these dollars are just not enlarging clear enough.

You'll be my eyes (or maybe take a more close up shot?)

Do all of the coins have the same letter or lack of a letter?

OK this is excellent. Now, let's hope your eyesight is really good. As crazy as this sounds, please count the eagles tailfeathers. There will be either 7 or 8 or what looks like a double layer of tail feathers.

It may be expected that on the older ones you'll count 8; on the newer ones, 7 - but still need to verify

(are we having fun yet?)

Customer reply replied 1 year ago
I'm getting one heck of an education!they all have 7

Oh you have no idea! You'll be an expert by the time I'm done.

Way back in 1878 when a law went into effect dictating that our gov’t had to purchase millions of dollars worth of silver and make it into coins - the mint obliged. Now mind you, none of this was necessary for our monetary system, but done at the behest of the West (California, Nevada, etc) to stabilize the price of silver.
***** ***** was an engraver and shortly after this law went into effect, he sculpted what has become known as the “Morgan Silver Dollar”.

It took 17 years before silver dollars restarted being minted in earnest, only by now it was a design called the “Peace silver dollar”. But wait, there’s more! For a portion of this year (1921) the Peace dollar wasn’t quite ready for the presses so the old Morgan dollar design filled that void temporarily. You’d think those few 1921 Morgans would be worth more right? Sometimes there’s no rhyme or reason to valuations - they are not.

As if the variation in mint marks wasn’t enough - consider that there were three different dies (or molds). The very first one gave the eagle 8 tailfeathers, until someone being a nitpicker pointed out that Bald Eagles have only 7 tailfeathers - that was mold # 2
Then, the design was modified to have double layered tailfeathers. 7 feathers superimposed over the 8.
There was also a 4th design, but that involved a variation in arrows. I won't get into that at this time since from what can see it doesn't apply to yours.

Then there’s grading. Proof coins are created specifically for collectors and considered the highest grade: At the mint, specific blanks (unstruck coins) are used and then struck slowly and deeply onto that blank, 2x’s. After that they are handled with kid gloves (literally) or tongs, but never human hands and then encased in various packaging so to speak that shows both sides.
It’s never this easy in grading coins though. Generally speaking, such proof sets range from MS-60 to MS-64 and since I can’t see with ‘hands on’ clarity I can only give you a general/ballpark idea of value.
It’s always suggested that with sets like these that you take them to a reputable coin shop in your area and get them officially graded and appraised. It’s always worth that effort and cost (costs vary; I cannot address that) .

I can start with the 1921 S (San Francisco mint) given that this was the last time the mint, any mint, produced these coins.

It's not a shabby value either. That one coin in mint, uncirculated condition has a value in the $100 range.

I know it might not be as much as you've seen it "listed" for elsewhere online, but those are individuals either delusional or dishonest.

Please stand by again -- I'm having difficulty with this site and those difficulties are what is delaying my getting responses through to you.

Yours are closer to the MS-60 to 64. Mint State coins. I do not believe they are "Proofs"

Apologies for that - my end keeps freezing and I've been losing all or parts of my responses. Still working on it!

Ahh, I think the site is over being 'wonky' (for a while?)

1881 to 1900 without mint mark means they came from the Philadelphia mint.

These prices are for each, not for a grouping.

The Silver Certificate dollar bill ? I can't see the details I need to see. Specifically date. Can you tell me what it is?

Thank you again! Now if this unusual by today's standards were in uncirculated condition it would be valued at "up to" $300. Talk about inflation?

In this circulated condition, but still good to very good you may expect $50-100.

All in all, I'm sure you've seen some crazy inflated listings online. Listings are meaningless; sales are what indicates values

Those 5 or 6-figure listings are, as I mentioned earlier, either uninformed owners or people perpetuating a full on scam hoping to snare naive victims with their claims.

Your collection is nothing to sneeze at right? Your dad had a very good eye and made his collection the higher end of what was likely his budget at the time. This is a very nice collection

Verified
August Abbott and 87 other Antiques Specialists are ready to help you
Ask your own question now
Customer reply replied 1 year ago
You were beyond helpful! Thank you!
Was this answer helpful?
Yes
No

Mark P
Appraiser/Sales Consultant
Bachelor Arts - Art History
3,084 satisfied customers
Is a Morgan dollar 1878 worth anything? I can't find a
it is in good condition but dirty. I'm afraid to clean it … read more

Diana F.
Appraiser
Bachelor's Degree
11,034 satisfied customers
Show more
Disclaimer: Information in questions answers, and Show Less
Disclaimer: Information in questions, answers, and other posts on this site ("Posts") comes from individual users, not JustAnswer; JustAnswer is not responsible for Posts. Posts are for general information, are not intended to substitute for informed professional advice (medical, legal, veterinary, financial, etc.), or to establish a professional-client relationship. The site and services are provided "as is" with no warranty or representations by JustAnswer regarding the qualifications of Experts. To see what credentials have been verified by a third-party service, please click on the "Verified" symbol in some Experts' profiles. JustAnswer is not intended or designed for EMERGENCY questions which should be directed immediately by telephone or in-person to qualified professionals.