I have a Tulley 1967 oil painting gulf shore painting can…

Customer Question
I have a Paul...

I have a Paul Tulley 1967 oil painting gulf shore painting can you give me value of it . It’s in the original frame

Expert's Assistant: The Antiques Appraiser can help. You can also send photos once I've connected you. Is there any info on the back of the painting, or a certificate of authenticity?

Expert's Assistant: What condition is the painting in?

Thanks! Happy to help! (Please ignore phone call requests)
You can attach a photo by clicking on the Blue Document Icon by the Red Send Button;
https://www.justanswer.com/help/search?f=send+photo 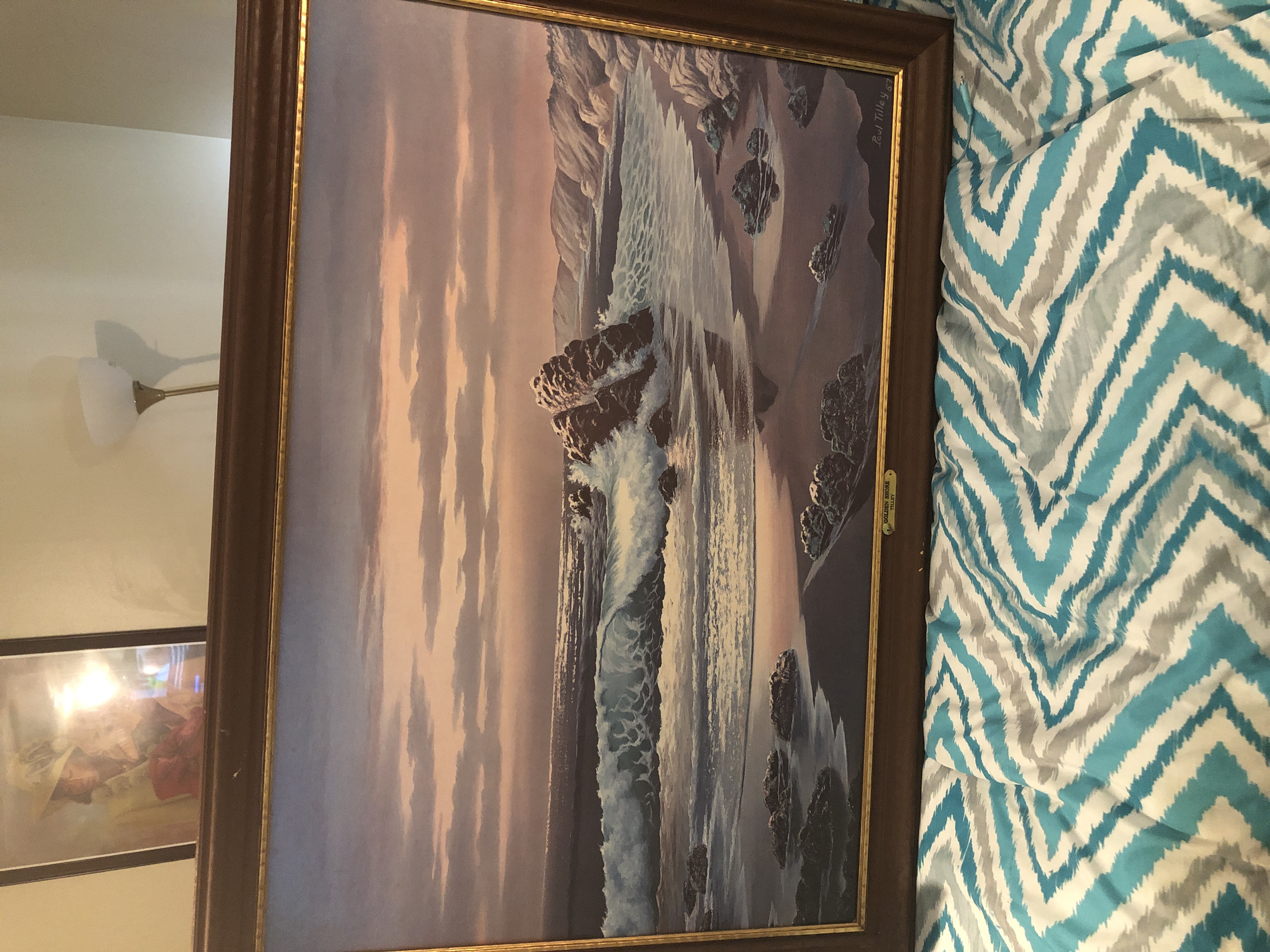 Thanks! I believe this is by California artist Paul Raymond Tilley (1891 - 1990) and this is typical of his large, over the sofa sized seascapes and today they sell at auction for $275 to $400 and at an antique or consignment shop they can bring a bit more, at the $400 to $600 level.

From AskArt: This information was submitted by Frank Abrams who wrote: "I have two paintings, coastal scenes, by this artist. One has a pamphlet with his biography, which he gave to the purchaser. On the front is his picture along with his Painting, Days End, a large coastal scene). Based upon his age here (72) and his age at death, (99 in 1990), this pamphlet was from the early 1960's. He seems to have lead a very interesting life. Also interesting is that he was "totally deaf" since WW!, yet he apparently loved music and played the organ.

On the back of the Tilley pamphlet it says the following:

Paul Tilley is an artist of the realism approach who tries from the depth of his soul to paint a pleasing picture as nature has composed it.

He has lived much of his life out-of-doors and has learned to know and appreciate the beauty of the world about him. Having lost his hearing in First World War, his total deafness has taught him to observe much that helps him in his paintings.

Paul Tilley has roamed and camped the deserts, mountains and seacoasts. Much time has been spent in studying how the ocean waves break into spray along the rocky cliffs and how the bright green moss on the wet rocks comes to light at low tide. He knows the golden tones of autumn in the deep woods. He knows how the desert can be a riot of flowery color in the spring and how the dark sky turns to gold at sunrise.

Paul Tilley has worked at many trades including the movies, photography, soldiering, ranching and as a Texas game warden. Having had less than two years schooling he is entirely self-taught in all his projects, among which have been the construction of homes, airplanes, machinery; pipe and electronic organs.

He loves good music. In his beautiful studio is a large organ which he frequently plays.

At seventy-two years of age, his day usually runs from 5 a.m. to 10 p.m. In his well equipped shop he makes his own picture frames, picture lamps, easels, color slides, slide viewers and other painting equipment.

He does not compete for prizes at art shows, his only exhibit being at the Laguna Beach Festival of Arts. His aim in painting is to create a beautiful picture at a reasonable price. Those who purchase his paintings are his judges and their appreciation his reward.

Within the last few years Paul Tilley has become one of the successful artists of Laguna Beach. He is a Christian gentleman and an American of Colonial ancestry.

Again, thank you! Is there any additional information that I can provide? Rating my professionalism using the 5-star system is the only way that JustAnswer recognizes my work in helping you and closes the question. It does not cost you anything additional. (https://www.justanswer.com/help/how-do-i-rate-answer) Also, I don't participate in calls that cost additional money for you: these requests come from JustAnswer and not the expert. If you have any more questions, let me know!

Thank you for reviewing your answer, but I noticed that you did not rate it. Is there any additional information I can provide?

Rating my professionalism is the way that JustAnswer closes a question and lets me help others. If you need help rating the question, see: https://www.justanswer.com/help/how-do-i-rate-answer or alternately, a reply like "thank you that was helpful" allows me to close it manually. Again, thank you!

Checking in one final time as some users have had reported issues in the past few days.

My goal is to give you the best experience possible! I hope I have earned a 5 star rating today. Please remember to rate my service by selecting the 5 stars at the top of the screen before you leave JA today. If you need more assistance, please use the reply box below and let me know. Alternately, a reply like "thank you that was helpful" allows me to close it manually.

100% satisfaction guaranteeGet all the answers you need
Share this conversation
Related Antiques Questions
Do you know of Bernard Bosman, artist? He passed in 1986.
Good, original frame has some water spotting or stains, back of frame has bosman writing and mention of Spain. I'm not with painting right now so don't have exact wording. But, it is etched in frame … read more

Nora
Expert in Fine and Decorative Arts: Renaissance through Contemporary
Post-Graduate from Christies London
26,584 satisfied customers
I HAVE 2 ORIGINAL HUBERT SHUPTRINE PAINTINGS. ONE PAINTING
ONE PAINTING IS OF A HARBOR WITH HOUSES ALONG THE WATER AND A SAILBOAT IN THE WATER. DONE IN BLUE HUES. … read more