Only: Glenda, I'm back again. I found Mom's Rosenthal china…

For Glenda B. Only: Glenda...
For Glenda B. Only: Glenda, hi. I'm back again. I found Mom's Rosenthal china set that I'd like to ask you a few questions about. I believe it's considered a Mid-Century Vintage piece. According to an online outfit named Replacements, Ltd. it's "Manufacturer: Rosenthal - Continental, Pattern Name: Bramble (Form E), Pattern Code: R BRAM" however a fellow on Etsy has pieces with the same pattern, some of his pieces say "R. Loewy" on it, who I researched to be a famous industrial designer, and he claims it's the same stuff, yet Mom's doesn't have the designer's name on the bottom. I'd like you to take a look at some photos and ask you further questions about the set and whether it's worth me filling out what's missing or not. A Consignment shop told me a "full set" is 8 pieces yet my Aunt who remembers Mom buying the Rosenthal thought a "full set" is 12 pieces. I'll need some help deciding what to do...
Show More
Show Less
Ask Your Own Antiques Question
Share this conversation

Answered in 14 hours by:
Antique Expert: Glenda B., Antiques Appraiser replied 11 months ago

I hope you are doing well.

Ok send me pictures and listings to his stuff on etsy 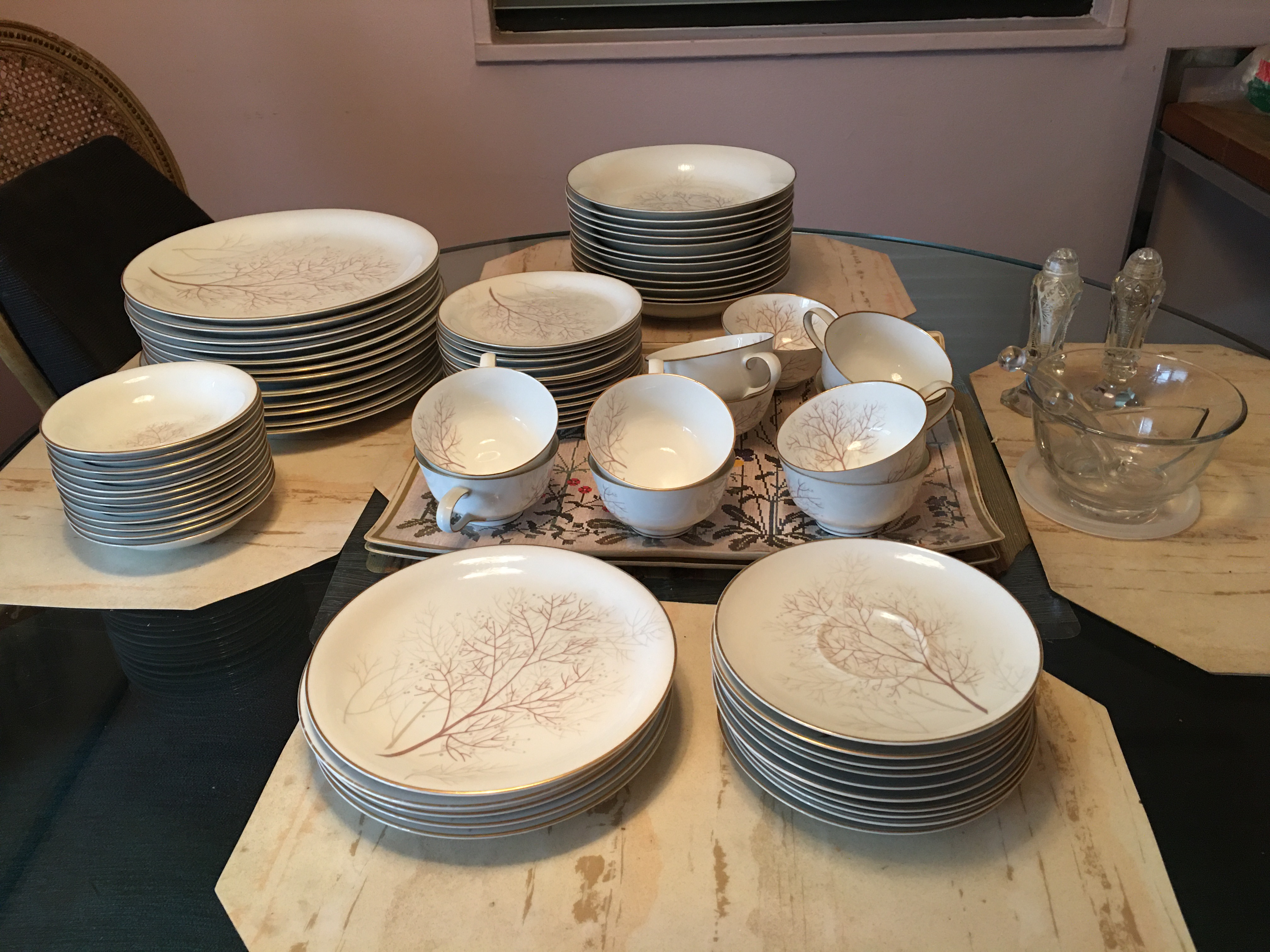 IMG_8088.JPGIMG_8088.JPG
Customer reply replied 11 months ago
Now onto Mr. Etsy's 3 serving platters. Unfortunately he has a bunch of 6" plates but mine are fine... 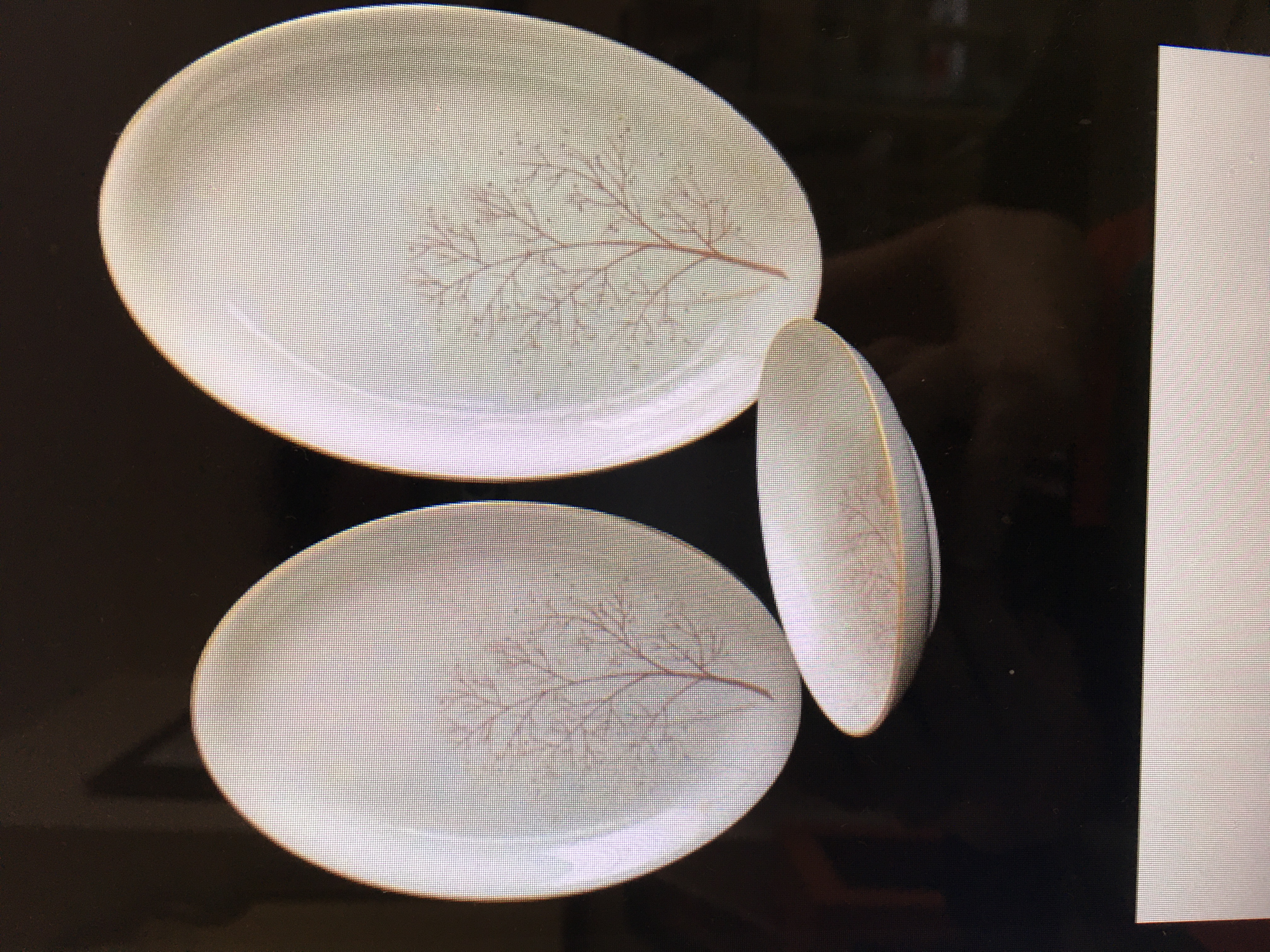 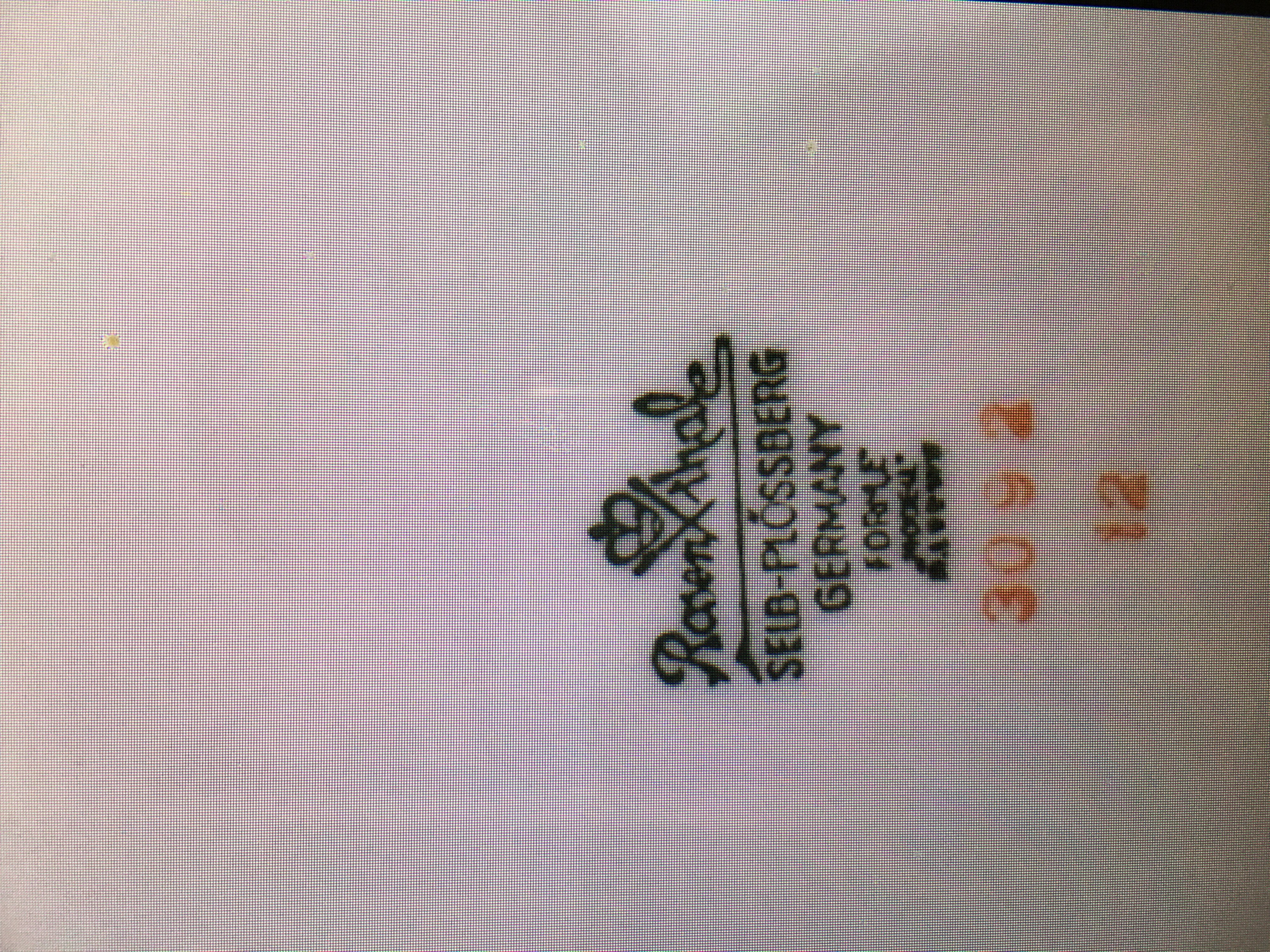 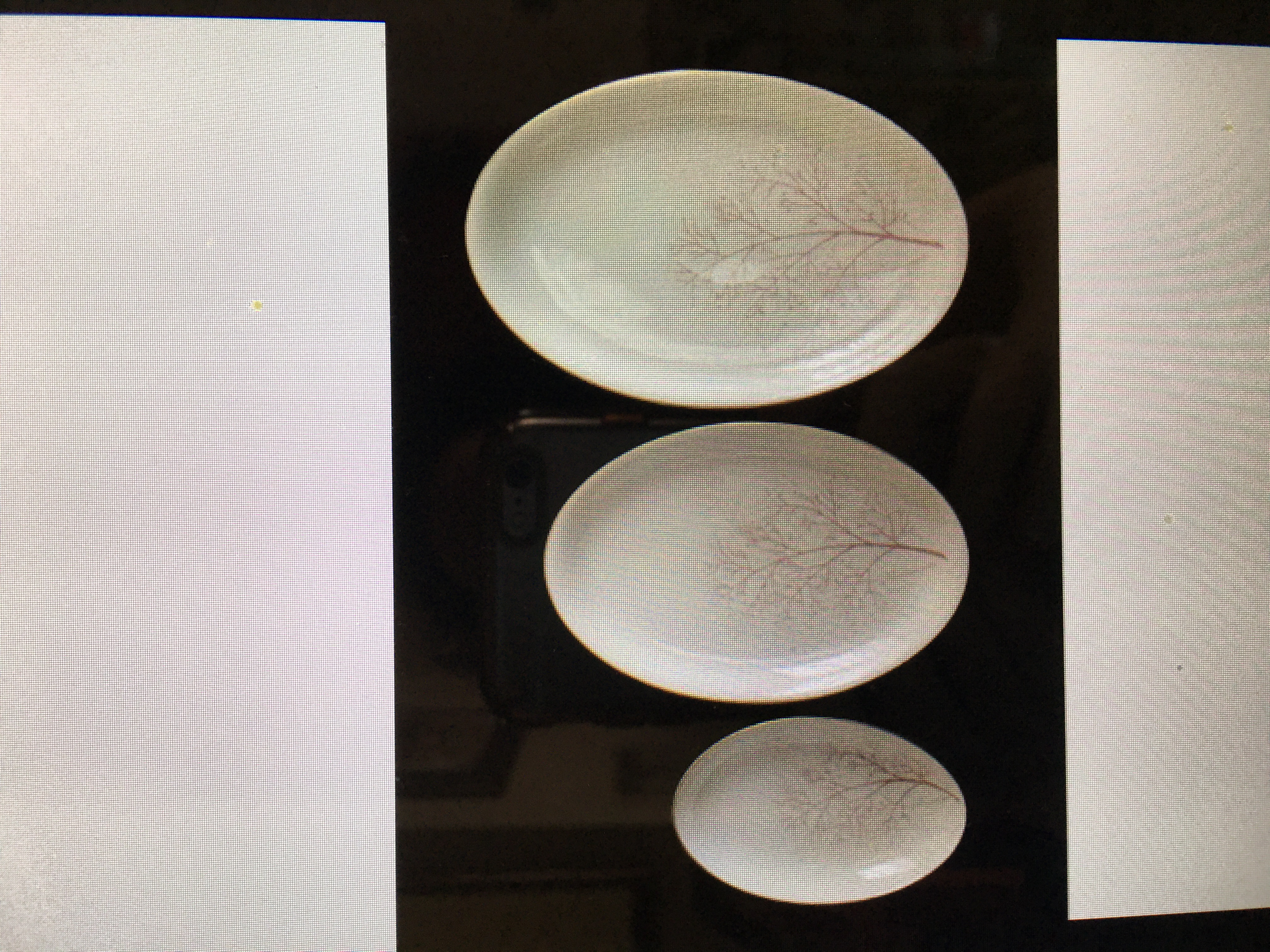 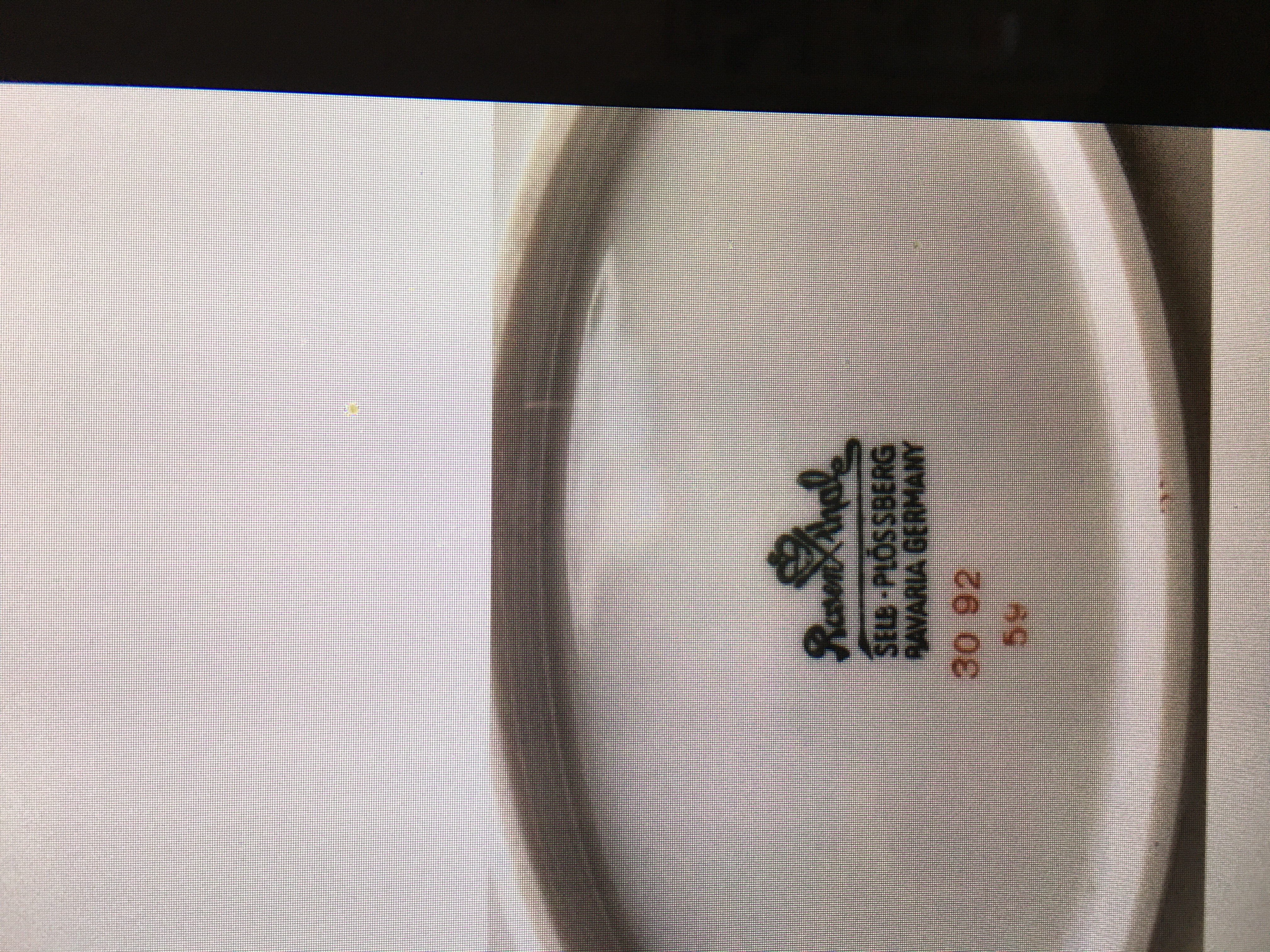 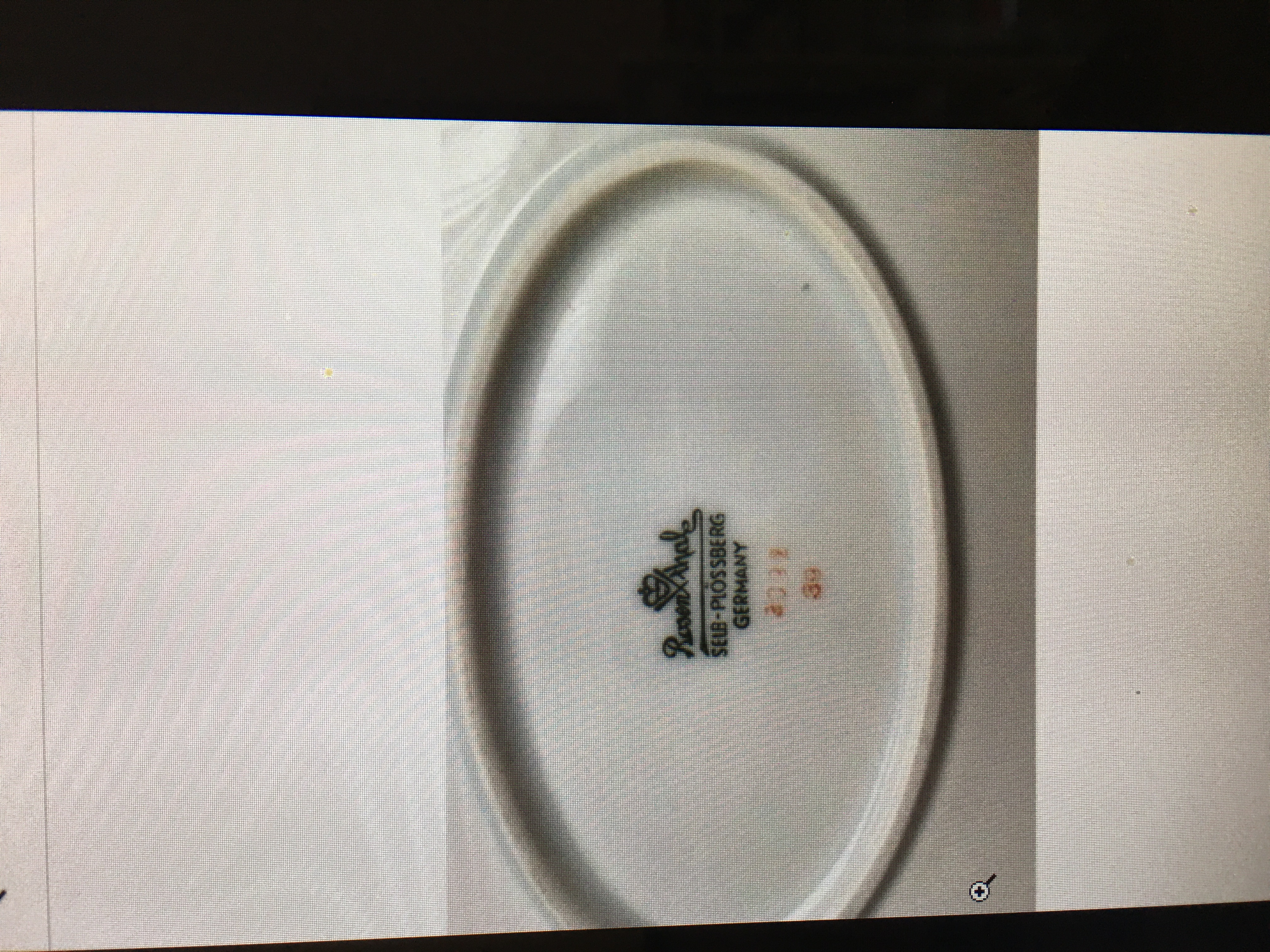 IMG_8151.JPGIMG_8151.JPG
Customer reply replied 11 months ago
Mr. Etsy also has a Tureen and sent these pictures of it 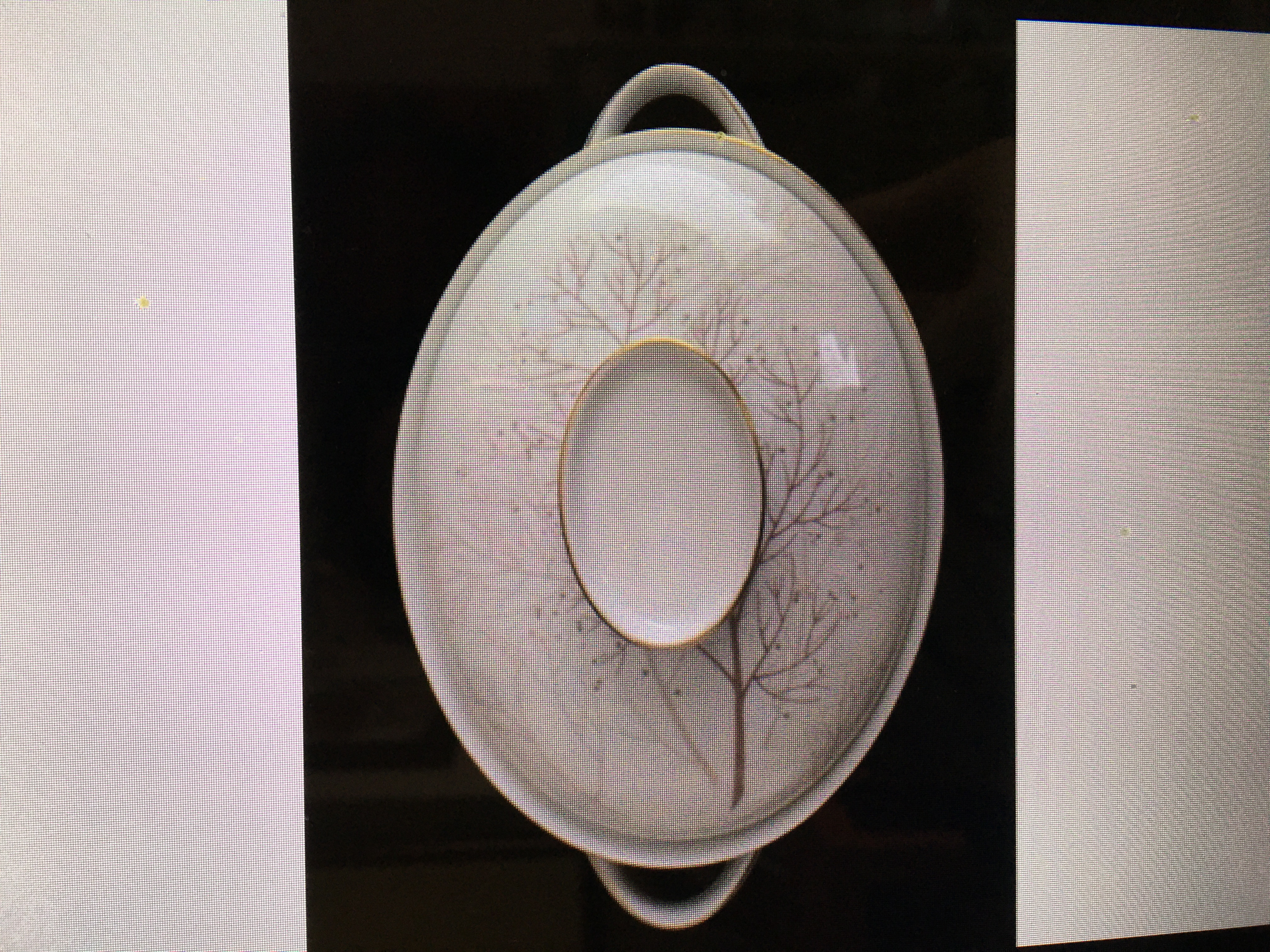 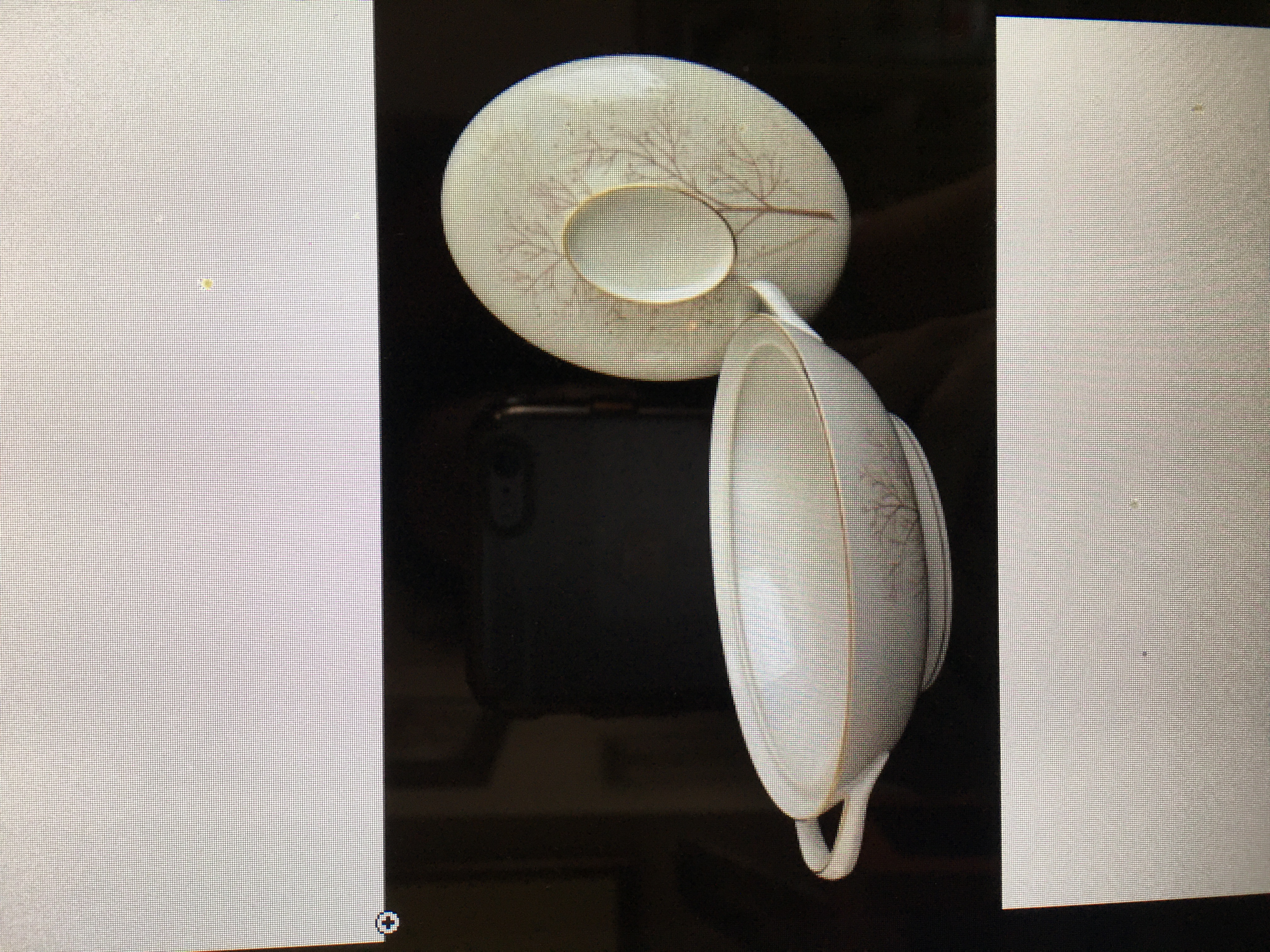 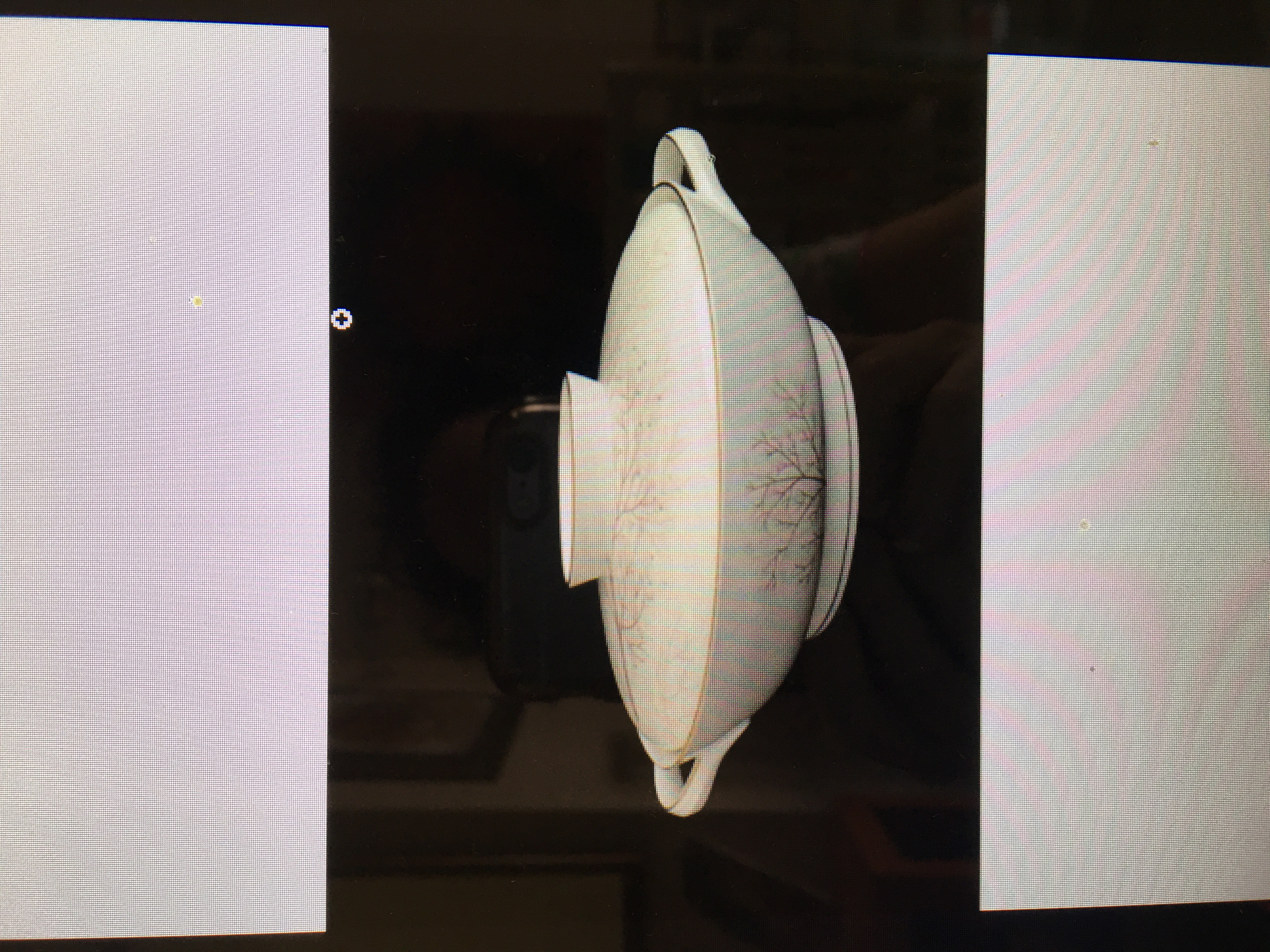 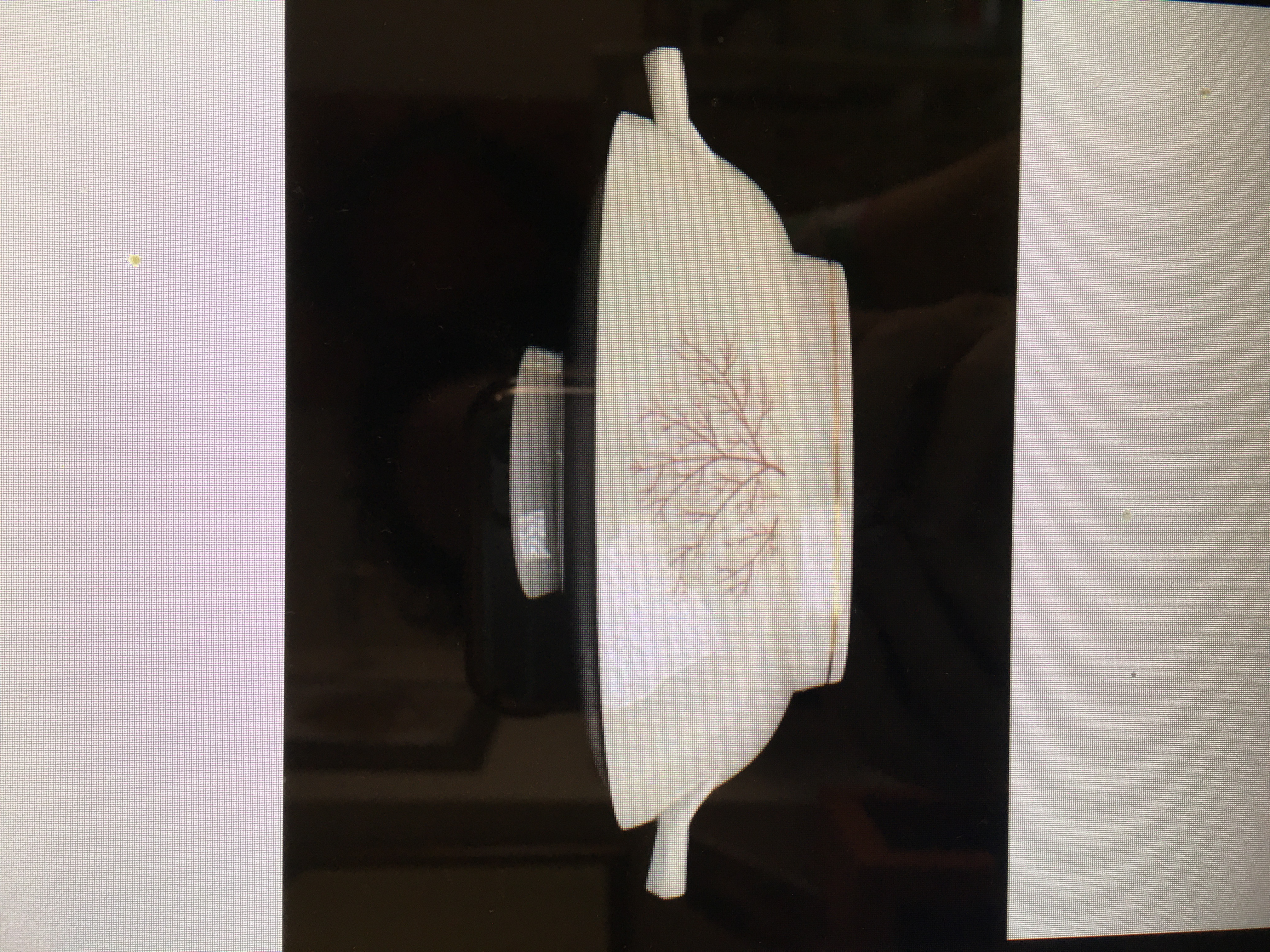 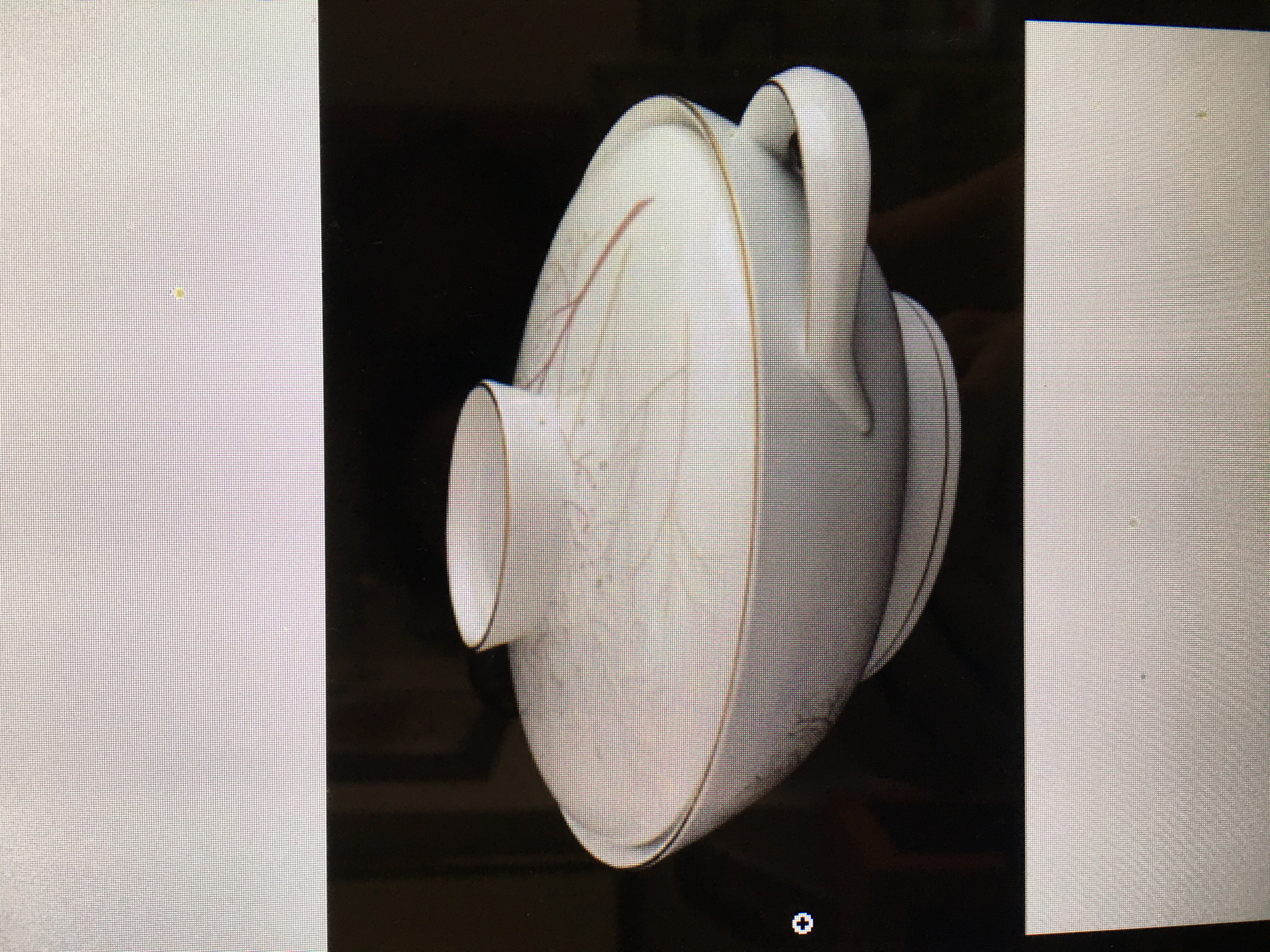 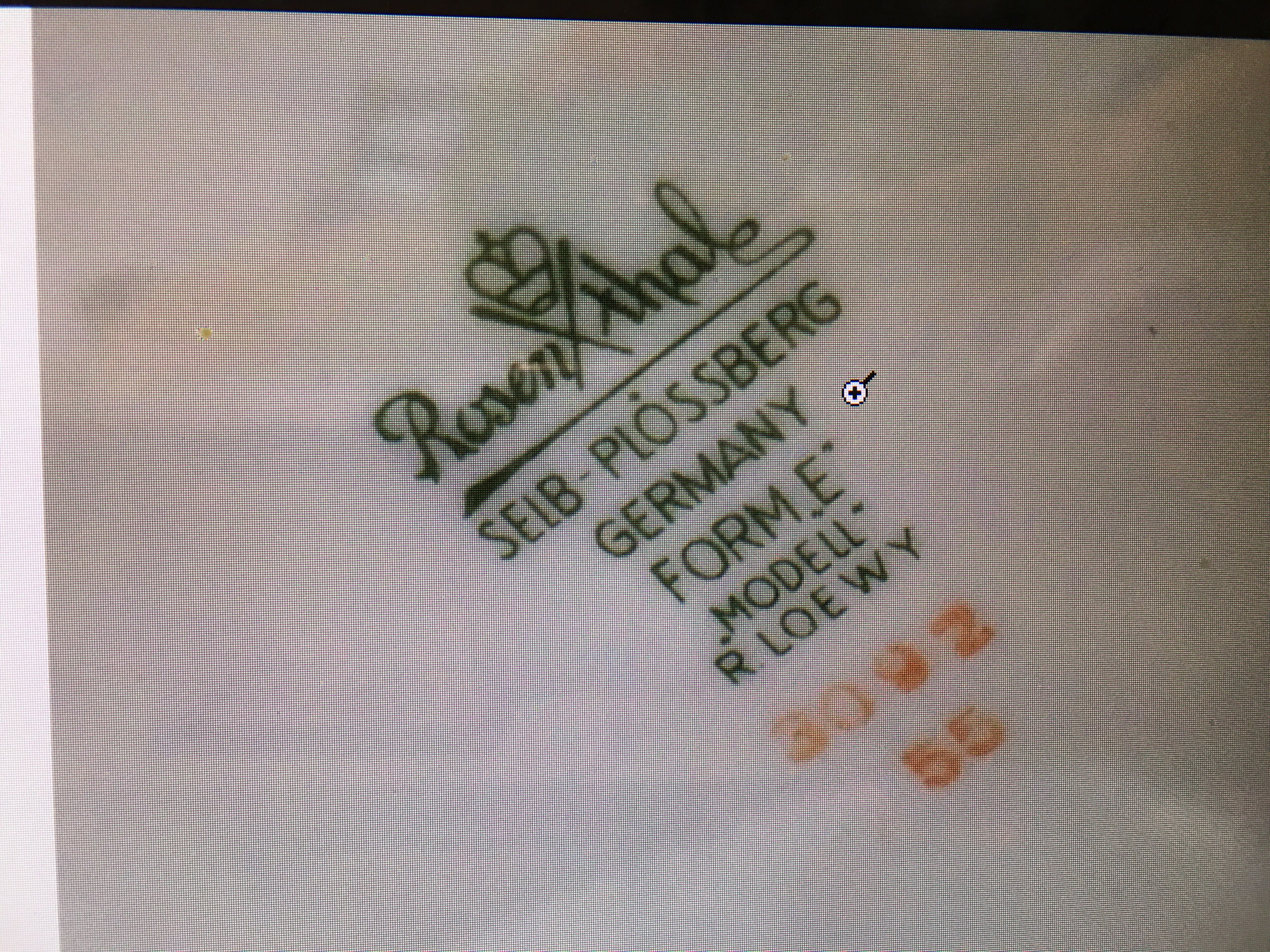 IMG_8157.JPGIMG_8157.JPG
Customer reply replied 11 months ago
I saw on Ebay some people selling the matching creamer and sugar bowl, but again, I don't know if it's worth bothering filling out all this stuff. By the way, I'll have you look at my silverware when we're done with this. My Aunt mentioned it to me last night. My mother gave it to me years ago. My Aunt said something like "Strasbourg?" for the silver, but she wasn't sure...

OK from what I found they are the same, your Mom's is from the time before R. Loewy became part of Rosenthal

His name on them does not make them any higher priced etc.

Here is the history of him:

Industrial designer Raymond Loewy’s career spanned six decades, from about 1920 to 1986, during which he was active in Europe and the United States, with offices in Paris, London, New York, and Chicago. By 1951, he directed a design staff of over one hundred and forty. Loewy and his firm are noted for their prodigious output, which ranged from advertising graphics to designs for appliances, locomotives, cars, aircraft passenger cabins, and even the interior of a space station.

The German porcelain manufacturer Rosenthal engaged Loewy in the early 1950s, at a time when the firm was recovering from material shortages and lagging sales after World War II. The Rosenthal company was founded in the 1890s by Philip Rosenthal, Sr., who lived in the United States for about ten years before returning to his native Germany. From its earliest days, Rosenthal exported its products to the United States, where the company enjoyed strong sales. Among its innovative marketing techniques, the firm sold its wares in shops that offered Rosenthal exclusively, and developed the idea of “open stock,” so consumers could buy individual pieces rather than full sets.

However, in the late 1930s, the Rosenthal family was forced to cede control of the company to “Aryan” management. At the end of the war the Nazi-era administrators relinquished control and by 1950, Philip Rosenthal, Jr. was in charge of the business. To restore the firm and help increase postwar sales, he sought to update the company’s designs.

The Rosenthal-Loewy association came about after Richard Latham, chief designer in Loewy’s Chicago office, met Philip Rosenthal who was visiting the United States to revive the company’s exports. Rosenthal offered Loewy part interest in the Rosenthal china production venture, and appointed Loewy chief designer. Loewy and Latham collaborated on the designs. The Model 2000 line, one of three Loewy designs for the company, was introduced in 1954. Rosenthal created the line’s name to evoke the idea of a classic modern design for the next century. The sleek simple forms, including the hourglass-like shapes of the coffee pot and creamer, and the inverted cone of the sugar bowl with circular foot and slightly domed lid, showed a sophisticated organic modernism that appealed to American postwar consumers. Model 2000 was extremely popular, with 20 million pieces produced by 1962 and a production run—in a variety of glazes and over 200 surface patterns—that lasted until 1978.

Your Mom's set came in several sets of different place settings, you could purchase them in services for 8, 10 or 12

The place settings were Dinner Plate, Bread and Butter, Salad Plate, cup and saucer making this a 5 pc place setting, all other pieces were extra, like small bowls, soup bowls,

Customer reply replied 11 months ago
I'm guessing the 6" plus plates, 12 of them, is a bread and butter plate then...I can understand where she had 12 teacups and saucers and now only has 10 saucers but 11 teacups...something broke...but the 5 salad plates is surprising as I can't imagine 7 were broken...Anyway, my question is, do you know if there's a market for this kind of thing? I see china being sold all over Ebay, a Consignment lady with a store in Connecticut told me she'd want at least a full set of 8 to consign them and her experience is these things sell for $300 to $600...Does it increase the value/sellability if I add the items from Mr. Etsy? You see, I unfortunately don't have a need for this set. I have a set of china from my father's mother so I'm out of space and I'd prefer to sell the more valuable set which is Mom's if I can

If I were you I would not add to a set I plan on selling, I would either sell the set as is or I would sell each piece separately, which usually makes you more money because people are willing to pay more for an item or two they need to complete sets.

Customer reply replied 11 months ago
Thank you for your opinion. I'll try to send you a picture of the silver tomorrow

If you do not mind send the silver on a brand new question.

If you have most of a service for 8 then sell it as that and then sell each extra piece separate.

This is a pretty neat set, and collectible.

It was a pleasure working for you.
.
Have something else you need a value for?

Here is how the site works. You rate this answer first.
Then Use this link www.justanswer.com
and write these exact words in the box HI GLENDA I HAVE ANOTHER ITEM.
.
To finish, click all five green stars ( 5 being best ) at the bottom or top of the screen.
.
On mobile or app, you will see "Rate Expert to Finish" at the bottom. When you tap it, it turns into the stars.

Or on a mobile phone or using the apps simply write THANK YOU or FIVE STARS.
.
Bonuses are also welcome! Many ask where to leave bonuses, adding a bonus is on the Leave a Review page.
.
Please keep in mind I am only credited ( and compensated ) for my answer if you rate me positively.
.
PLEASE! IF you have any questions about this answer, please ask before rating.

Verified
Glenda B. and 87 other Antiques Specialists are ready to help you
Ask your own question now
Customer reply replied 11 months ago
Understood. I'm thinking I'll remove the few chipped items to get down to 8 good pieces from the 12, and then buy 4 salad plates to get up to 8. Replacements Ltd is listing salad plates for $8 a piece, so $32 is a reasonable investment to round out the collectionthen, as you said, try to sell the extra pieces separately

Southwb
763 satisfied customers
Show more
Disclaimer: Information in questions answers, and Show More
Disclaimer: Information in questions, answers, and other posts on this site ("Posts") comes from individual users, not JustAnswer; JustAnswer is not responsible for Posts. Posts are for general information, are not intended to substitute for informed professional advice (medical, legal, veterinary, financial, etc.), or to establish a professional-client relationship. The site and services are provided "as is" with no warranty or representations by JustAnswer regarding the qualifications of Experts. To see what credentials have been verified by a third-party service, please click on the "Verified" symbol in some Experts' profiles. JustAnswer is not intended or designed for EMERGENCY questions which should be directed immediately by telephone or in-person to qualified professionals.